‘Batman: The Telltale Series’- The Good, the Bad, and the Two-Faced in “City of Light”

Spoilers through Batman: TTS, episode five: “City of Light”. There are some major spoilers, as this review covers the entirety of the first season, so you have been warned.

I’m always hesitant when Telltale announces a new IP for their games, and yet, by the end of every season, I find myself pleasantly surprised by Telltale’s ability to so completely mirror these already established worlds. Batman: The Telltale Series is no different. If you’re a fan of the Bat, be it movies, comics, or video games, there’s something in Batman: TTS to enjoy. Of course, with Telltale staying true to themselves, Batman: TTS takes what we know about the hero and turns it on its head, challenging what we know about Bruce Wayne and his origin story.

This review isn’t so much a discussion of episode five: “City of Light,” but more a reflection on all five episodes as a whole. As someone who enjoys Batman for his great selection of stories (and villains), I was excited for Telltale’s take on the cowled hero. While I find myself mostly positive on the game itself, I want to nitpick some of the finer points of the story because while this is a GOOD Batman story, overly familiar characters and unnecessary twists kept Batman: TTS from being a GREAT Batman story. 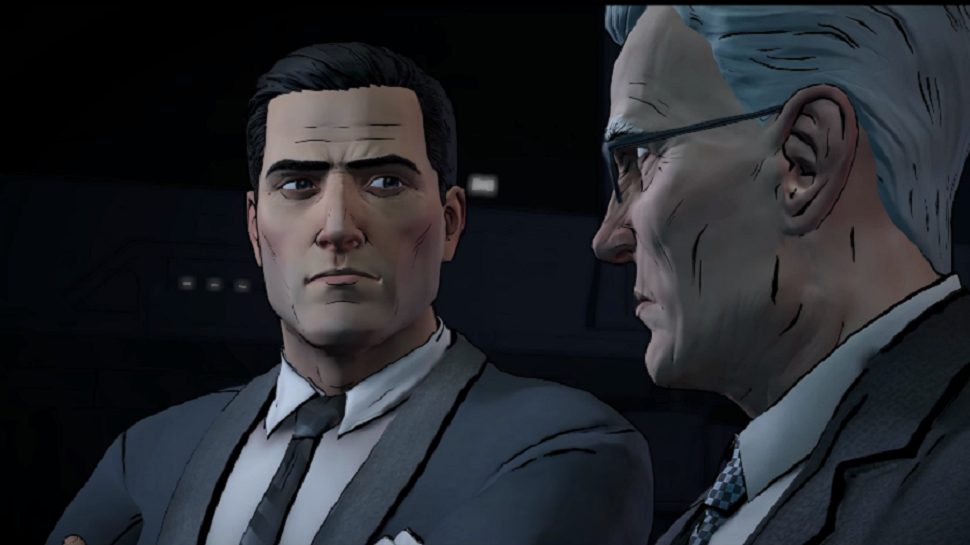 Alfred: Alfred is easily the heart of any Batman plot. As Alfred goes, so does Bruce Wayne, so I’m glad that Telltale kept this character mostly true to the butler we all know and love. When it came time to save Alfred from Lady Arkham, it was a no-brainer choice for me to remove Batman’s cowl to save his dear friend. In Alfred we trust.

I do have one concern with Alfred in Batman: TTS, however: if he knew about Thomas Wayne and his brutal nature, why was he so incredibly loyal? Was it because of Bruce and Martha? Why did he not tell Bruce the truth sooner?

(Gordon also falls into this “Good” category but I’m of the mindset that he was criminally underused. Montoya was a pleasant surprise, however.)

Selina Kyle/Catwoman: A lot of fans love to hate on Catwoman and her tendency to leave through the bathroom window, but I cannot help but love her. There’s something utterly charming about trying to woo a woman who refuses to let her true colors show. She’s a self-serving thief first and foremost and that’s endearing to me. In regards to Bruce, she’s a necessary evil. Selina is a reminder that while people have the ability to be bad, there’s also hope for them to surprise you with their goodness, as well. After the events of Batman: TTS, Bruce needs that hope in his life, even if romancing Selina (I’m only human!) did put a “dent” in his friendship with Harvey.

Combat/Detective Mode: The biggest concern I had with following a Bruce Wayne-centric story was that it had the potential to be boring, full of fruitless dialogue and monotony. Thankfully, Telltale alleviated some of that boring “walk in circles and inspect items” routine by adding the Detective Mode. Rob discussed it a bit more in his initial review of episode one, but I just want to say I’m a huge fan of any time Telltale adds more interaction to their story telling. Combat was mostly good, except for when I ran into framerate issues, which I’ll discuss more below. 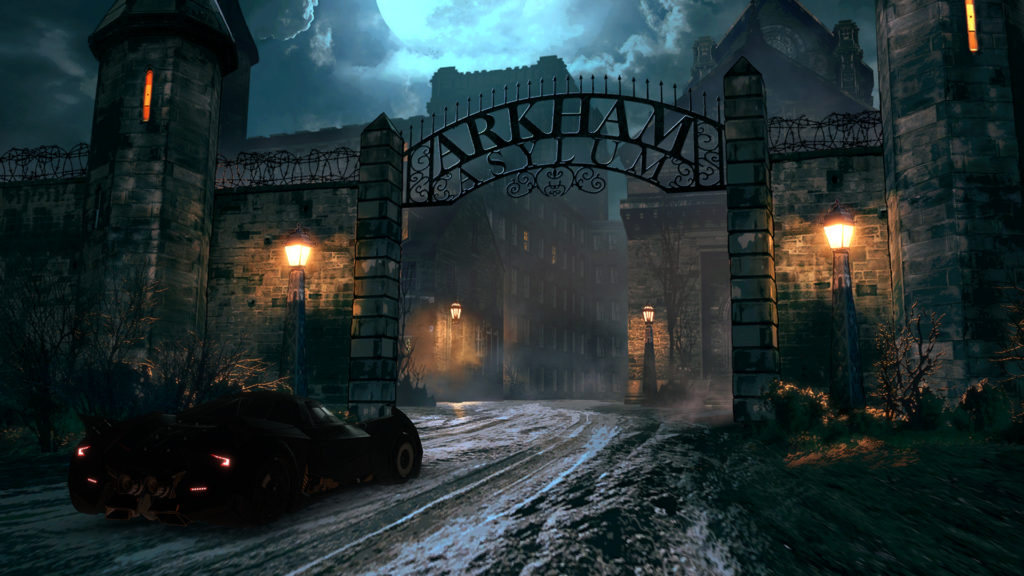 The Waynes: I hate Batman’s origin story; not because it’s bad but because I feel like there’s not a single person who doesn’t know it. Much like the overuse of the Joker, no one tells a Batman story without first showing how his parents died. Spoiler alert: we all know they were killed, leaving Bruce a tormented orphan who was afraid of bats. That being said, I applaud Telltale for taking this image of Thomas Wayne and twisting it so much that Bruce had to deal with the fallout. I thoroughly enjoyed Bruce coming to terms with actually being ashamed of being a Wayne.

However, I struggle with the notion that Thomas Wayne was such a bad guy that only the other bad guys really knew the extent of it. Alfred really kept that secret from Bruce for decades? Bruce really didn’t notice anything in the books? Falcone never used that information against a young, impressionable Bruce? Instead, I would have much preferred a subtler villain in Thomas Wayne, one who was less “kill, kill, make money, kill.”

On a similar note: did Bruce never step foot in Arkham Asylum? I know most of his villains come from the facility but I’ve always struggled with the fact that it obviously looks like a place that breeds insanity and hostility. I’d much rather see a cleaner, more hospitable facility that belied a sense of evil, rather than one that straight up looks like it belongs on an episode of TLC’s Most Haunted Buildings from the 17th Century.

Harvey Dent: I loved Harvey in Batman: TTS. He was a character I truly wanted to believe in because at the end of the day, I thought he was likable and charming. But Harvey, in my mind, never stood a chance because Harvey Dent, AKA Two-Face, is one of Batman’s most recognizable villains. Do you know why I saved Selina and stole her away from Harvey? Because I KNEW no matter what I did, Harvey would become Two-Face. Instead of saving the fallen hero, I put my faith in the anti-hero who would probably save me when push comes to shove. If Batman: TTS had gone with a lesser known villain, maybe that could have been avoided, but Harvey was doomed not because of his friendship with Bruce, but because of his history in the Batman lore. I discussed this more in my review of episode three, but my relationship with Harvey became dictated by a self-fulfilling prophecy, and in some ways, that ruined him for me.

Oswald Cobblepot: Much like with Harvey, the same issues could be said for Cobblepot. I knew he was going to be a character I’d never trust and honestly, I struggled to understand his purpose by the end of the season. Why did Telltale feel the need to turn him into a young, troubled football brute who probably cheers for Manchester City? Bruce already has several childhood-friends-turned-villains. Why alter Cobblepot to fit that mold? Why not instead create the Hush game I’ve been begging for? Cobblepot wasn’t a TERRIBLE villain, all things considered, he just wasn’t necessary. 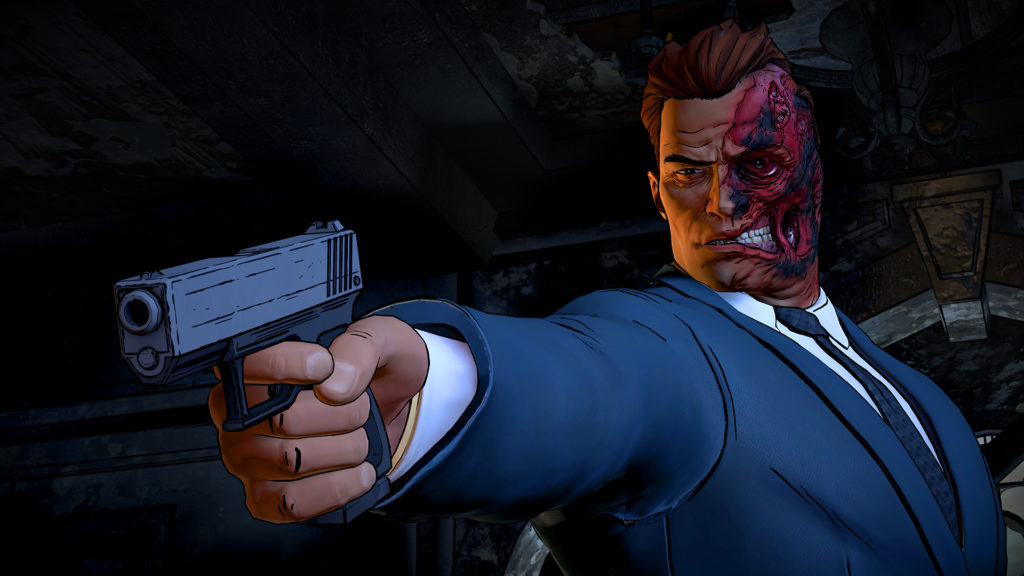 Performance Issues: I’m not a graphics snob. I make that fact plain because I need it to be clear that I don’t expect every game to run flawlessly and at a crisp 4k resolution. (I’m not Bilal, y’all.) I also know what it’s like to play a Telltale game with FPS issues because I’ve played EVERY Telltale game. That being said, despite the new engine, framerate issues in episode five were an honest-to-goodness disaster. I don’t like blaming games for my follies (of which I have many), but there were combat sequences where I straight up missed attacks because of the lag. The episode’s climactic moments were slammed to a halt because of the constant stuttering and buffering. I’m almost certain I missed out on important dialogue because the game couldn’t catch up to itself. The combat sequences would have been stunning, had they not glitched through the entirety of the fight. Again, I want to reiterate that I don’t mind performance issues, but the issues in episode five on the Xbox One were absolutely unacceptable.

The Joker/John Doe: Why does every Batman story rely on the Joker as a source of tension for Bruce? I know he’s THE Batman villain, but his cameo appearances felt wholly unneccessary for the game at large and it came across like a fan service move to get gamers excited by his appearance. Batman has one of the best gallery of rogues of any superhero. We don’t NEED the Joker for a good Batman story. But given the ending of the season, it looks like we’ll be getting a lot more of him.

Vicki Vale/Lady Arkham: I wasn’t happy with the twist that Vicki Vale was Lady Arkham, mostly because it felt like a twist for the sake of having a twist. I know that Telltale is working on a limited timeline here and creating an engaging background for a villain in only a few hours is difficult work, but given Vicki’s demeanor and actions in the first two episodes, it almost feels like her transition to villain was a spur of the moment decision, rather than an organic decision that was integrated in the story from the very beginning.

And the thing is, I liked all of the pieces Telltale created for Vicki. She’s a take-no-shit reporter who gets her job done, and well. I trusted her over Gordon in the first episode. As Lady Arkham, she’s a compelling villain with a disturbing background whose motivation and need for revenge makes complete sense. However, I cannot, even now, reconcile that the two are the same person. Maybe it’s because they never showed Vicki behind the Lady Arkham suit. Maybe it’s because as soon as she decided to kill her foster parents, she shaved her head and lost her mind. But we never SAW any of that descent into darkness. We never saw Vicki as anyone other than the gung-ho reporter and that’s a shame because she could have been fantastic.

Also, I refuse to believe that, as Batman, we let Vicki be crushed to death under a pile of rocks. That ending didn’t sit well with me.

I don’t begrudge Telltale for the Batman story they told. In order to lure in fans they needed to rely on familiarity and fan service to keep people interested. And, let’s be honest, I still had a ton of fun playing through the series. Despite performance issues and a disconnect with the main villain, I still recommend the game to anyone who is a fan of Batman. Telltale has given us the best version of Bruce Wayne I’ve ever seen in a Batman medium and for that, I’m grateful. However, I’m hoping now that fans see that the story is in capable hands, Telltale can take bigger risks with season two and I eagerly await their rendition.

@theworkprint
Follow
Previous article
Our Favorite Moments From ‘The 100’ Season Four Trailer
Next article
‘Gilmore Girls: A Year in The Life’ Is All Quirk, No Heart