This week on Awkward: It’s time for Senior Prank day, which includes a naked Jenna, SNAFUs and bubbles.

‘Prank Amateurs’ starts off just like the pilot of Awkward did five years ago, with Jenna and Matty getting naked in the school supply closet. This time, though, there is no ‘sexy time’ and the two are accompanied by the entire senior class. Spring Break is officially over, school is back in session. and the entire senior class is stripping down in the utility closet prepping for the annual senior streak. Jenna is trying to look on the bright side of life including her new relationship with a hot Marine and her new platonic friendship with Matty but is interrupted when she overhears Gabby and Jake discussing their late night Spring Break rendezvous. For some reason Jake and Gabby decide that this cramped utility closest is the perfect location to discuss their transgression. More importantly though, holy shit, how big is this fucking utility closet. Jenna freaks out so badly when she hears this news that she bolts out of the closet. Into the school hallway. Stark naked. She ends up ruining Matty’s perfect senior prank while simultaneously getting suspended for the day.

Jenna comes home and confides in her mother about her Matty problems. Her mother bestows some quality advice to Jenna: sometimes doing nothing, is the best thing. If Gabby is no longer cheating on Matty, maybe she should keep quiet and not stick her nose in where it doesn’t belong. Jenna takes her mom’s advice to heart by delving into Tamara’s problems. Tamara breaks it down for Jenna. T cannot BTE (break the engagement) with her Marine fiance over the phone. She has to do it F to F (face to face). Therefore she is forcing him to drive all the way to her so she can, unbeknownst to him, break up with him.

That night, Jenna has a hot date with her hot Marine boyfriend Brian. The date is quickly interrupted though when Tamara brings her hot Marine fiance (who she is supposed to BTE with) for a double date. This pretty much kills all the chemistry that Jenna has toward Brian, because everytime they go to kiss, she hears the echo of T giggling in the background. Brian and Jenna take a walk to try and rekindle their Spring Break romance fire, but it is fruitless. This relationship is dead on arrival. The only good thing that emerges from the stroll is a great shoutout to the pilot with Jenna stating “I broke my arm once drawing a bath.” Ha, what an understatement Jenna. Jenna ends up trying to ditch Marine dude by heading back for the senior prank, but Tamara insists the Marines come with. 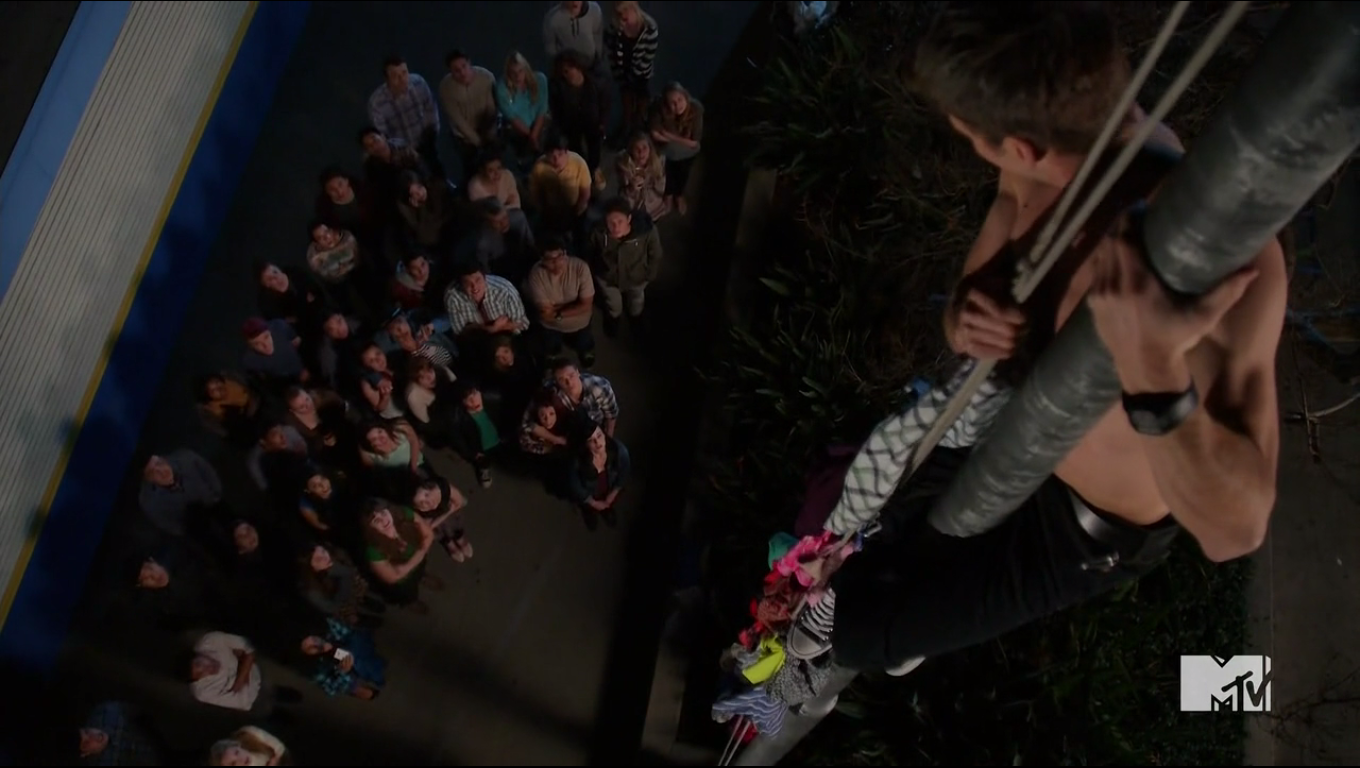 The four head to the high school to find Matty trying to string various undergarments together and fly the on the flagpole. There is a slight SNAFU, there is a knot causing a snag in the line, or, you might say, the panties were stuck in a bunch. Brian elects himself to solve the problem by stripping off his shirt and climbing up the pole. Unfortunately he can’t help because his manly Marine hands are too big to untangle a small knot. Matt throws down his t-shirt and attempts to climb the pole but is stopped when Jake miraculously fixes the problem.

[Note: Okay, I just want to make a point to people who hate on TV and say you should turn it off and pick up a book. I have learned so many things from TV: I learned that a liver can regenerate (Grey’s Anatomy); the life story of Mary Queen of Scots (Pretty Little Liars); and now that SNAFU is actually a military acronym for Situation Normal, All Fucked Up. These are all things I would never have known if I did not watch TV. I am just saying.]

Since all of Matty’s pranks were super lame, troublemakers Theo and Cole decided to help their Prank Captain out. The duo filled the hallways of the school with BUBBLESS!! Everyone is happy and rejoicing because they now have a successful prank, but mostly because they are surrounded by BUBBLES! During this moment of utter bliss, Jake decides to run up to Gabby and blurt out “Matty wanted to break up with you” and after Gabby says WTF Jake just shrugs “just forget it.” Ugh Jake, could you be any douchier? You can’t drop a huge truth bomb of knowledge and then say “just forget it.” You can’t unhear something you have heard. Just because you feel better about getting it off your chest Jake does not mean that Gaby can pretend she did not just hear what you said. This causes a chain reaction resulting in Gaby yelling at Matty, admitting she lost her virginity to Jake, and Matty realizing that Jenna has been keeping a secret. 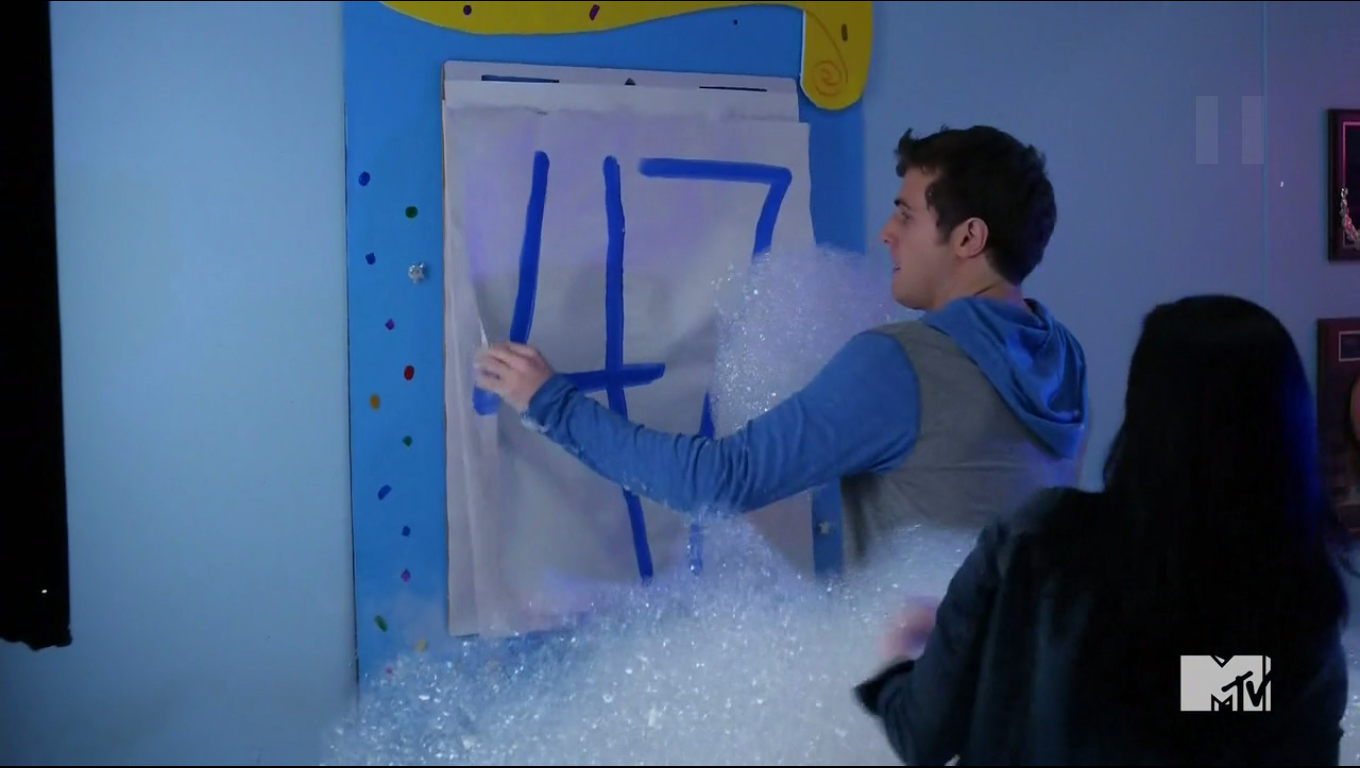 In Sadie News
Sadie gets called to Val’s office where her mom is waiting. Her mom, who abandoned her as soon as they were broke and forced her to live with her insane, drunken, horrible aunt, is back from New Mexico and wants to be a part of her daughter’s life again. Sadie just says “too fucking late, darling” and storms out of the room. God, I don’t think there is anything I love more about this show than when Sadie’s armor starts to soften and we get to see her be an actual human. It is so hard to like her, and I mean I still don’t. Sadie is a horrible human being. But to see her express her actual emotions, instead of just being Bitch-o-Bot 2000, feels so rewarding.

SEASON 5 of AWKWARD HERE WE COME….

Val Quote of the Episode:

Val: You know what’s funny. Cats have litters of kittens and then poop in litter boxes. Who made that decision.