The Americans Recap: Hold on to Your Gag Reflex

The Americans is on a roll in Season 3…if it’s considered a roll to make me want to vomit on a weekly basis. Last week the show taught us what it sounds like when a corpse is folded up in a suitcase and in episode 3, it gives us an up close and personal look at molar extraction…with a pair of pliers.

The heat is on, in more ways than one, and the episode begins with Elizabeth and Philip picking up a CIA tail after planting a bug on a potential new source of information from the Afghan group. They’re being tailed, the CIA has multiple cars planted to watch them, and it looks as though there isn’t a way out – especially when Stan and the FBI determine that they’re going in for the kill.

Philip gets out of the car and calls for help, leaving Elizabeth alone with only seconds to spare. It’s one of the first times during the series that we’ve seen her truly rattled, scared, and in the broader, ongoing context of the couple’s conversation about the recruitment of their daughter, it makes me wonder if Elizabeth witll reconsider her position. Does she want Paige to be scared like that? Hunted? It’s hard to say because (after the tooth extraction) she’s pretty much back to her old self. 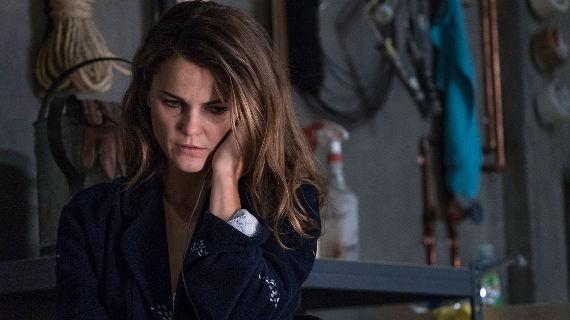 Philip continues to struggle with the KGB’s intention to recruit their eldest child, convinced that a girl raised in the easy life the United States provides will not be able to handle the trials and hardships of the spy life. Their mentor (or handler, whatever he is), reminds him that all lives have trials and tribulations in our lives no matter what our chosen profession.

The tension continues to invade Philip and Elizabeth’s personal life, which is sad because she’s just realizing how important he and their marriage is to her and is willing to make concessions in order to keep it healthy. They might be murderous Russian spies, but I totally ship them.

If you asked me to sum up the beginning of the season in a single word, it would be SNOOPING. Paige is snooping, the FBI is closing in, and the Jennings….well, technically, they’re always snooping.

The scenes where Elizabeth is alone in the car with the CIA and FBI closing in are some of the most tense in recent memory, and I have to admire the quiet but sure way the writers, actor, and editors came together to force my heart into a gallop while we waited to see whether she would finally be apprehended. This episode is my favorite of the season so far for that reason – all of the feelings – even though I hid my eyes for the good three minutes focused on tooth-pulling.

The Americans is going places and we’re along for the ride, for better or for worse. If nothing else, the people that come together to bring us this show every week have proven – quietly but steadily – that we can trust them with the characters, the story, the nuance, and the atmosphere.

With our hearts and our dinners…well, that remains to be seen.