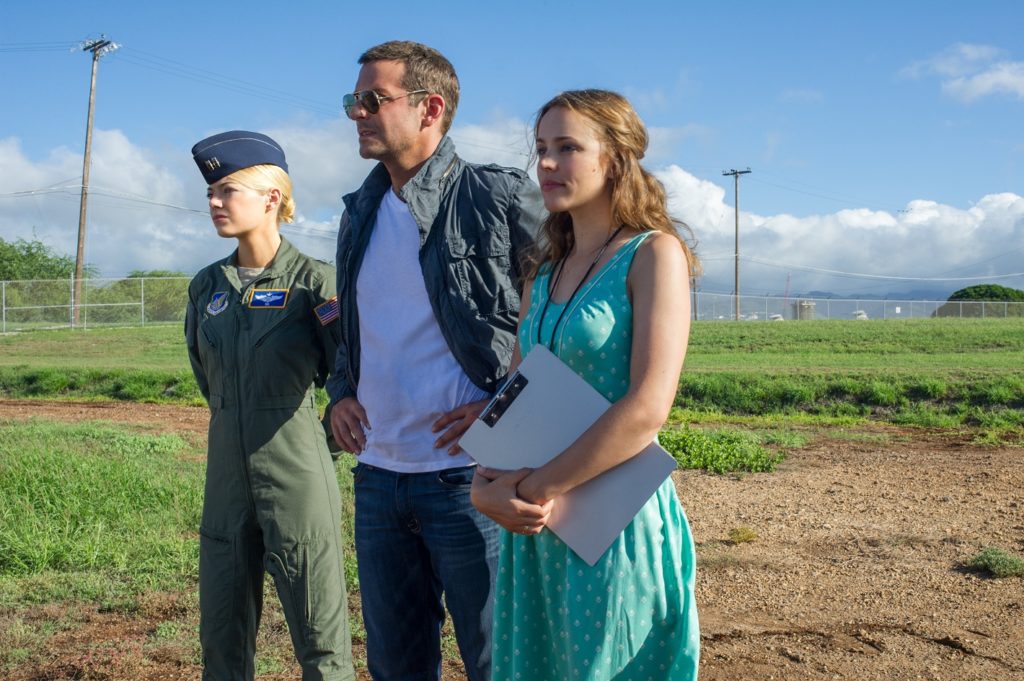 A couple of months ago I wrote a rather scathing review of 50 Shades of Grey and assumed at the time that I would not see a worse film this year.

A couple of nights ago I had the chance to see an early screening of Writer/Director Cameron Crowe’s latest opus, Aloha, and was surprised to find the man himself standing in front of the theater before the film began to introduce it to the audience made up of film critics and other members of the press. Normally this type of introduction is a lighthearted affair with a couple quips about the making of the film and how nice it was working with such a talented cast, but that wasn’t the case here. Instead, Mr. Crowe addressed us with a sort of defeated malaise that reeked of a man clearly affected by months of bad buzz stemming from the Sony hack emails and a stream of news articles over the previous 24-hours accusing the film of white-washing the populace of Hawaii.

Crowe never addressed these accusations directly but defended the film by saying he only intended it to be “a love letter to Hawaii” and then wrapped things up to let the film speak for itself.

Suffice it to say, a love letter to Hawaii it was not. In fact, it only took about 15 or 20 minutes for me to turn to my boyfriend and say, “What the fuck is this movie?”

I struggled to answer that question as Aloha played out over the remaining 90 minutes or so and in the end the only answer I could come up with was that it was a plain and simple MESS. 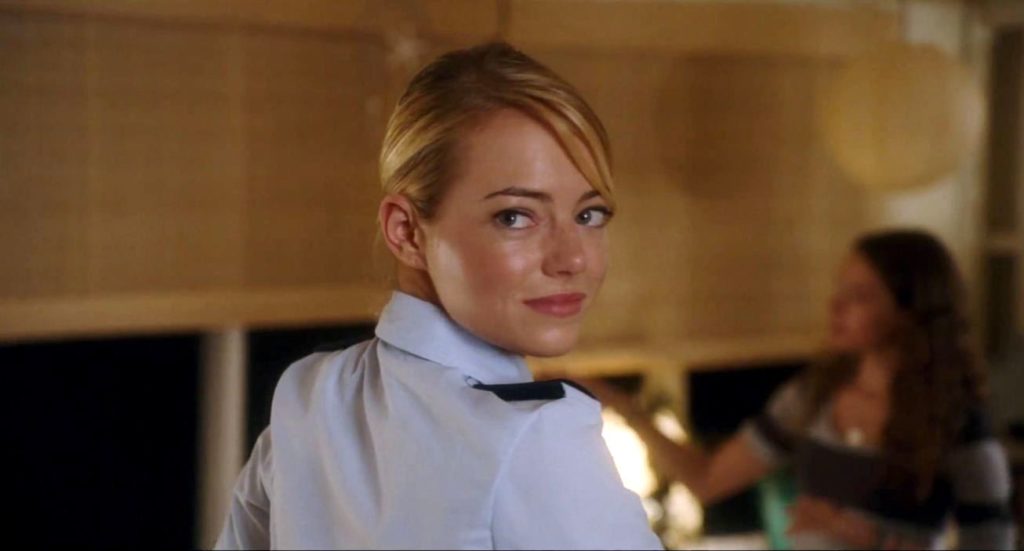 I mentioned 50 Shades of Grey earlier because even though I found that film to be terrible disaster, it was somewhat cushioned by the fact that it was a hilarious, terrible disaster that occasionally felt like it was in on the joke. Aloha on the other hand seems to be a film without a self-conscious bone in its body. At no given moment is it entirely clear who we should be rooting for, why we should care about anything that’s happening, or even what genre it should be considered. At its core it feels like a movie written by 12 people who never spoke to each other or read what each other was writing.

You can then imagine my surprise when I saw Crowe listed as the sole writer on the film. Is it possible that he let some neighborhood children make a few additions to his first draft of the screenplay and then called it a day? That’s the only explanation I can think of for the man who previously gave us Jerry Maguire, Say Anything, and Almost Famous.

So what’s the plot you ask? Well, the best I can summarize it is as follows:

A former military man, Brian plated by Bradley Cooper, (who is now down on his luck and working for private contractors) arrives in Hawaii to negotiate with a local tribe of native Hawaiians for the placement of a new military installation that will be able to launch satellites into space for an eccentric billionaire played by Bill Murray. For this task Brian is paired with a plucky military servicewoman named Allison (Emma Stone) who is proudly 25% Hawaiian and therefore obsessed with preserving the land and sky above them. In other words, she hates the idea of launching things into space from Hawaii.

Brian and Allison are an odd couple but oh gosh you better believe they end up falling for each other! But wait! …There’s more!

Brian also immediately encounters an ex-girlfirend, Tracy (Rachel McAdams), he hasn’t seen in 13 years and she immediately gets “all weird” around him causing her stoic husband (John Krasinski) to want a divorce.

Oh and then we find out Brian is actually the father of Tracy’s oldest daughter (duh!) and that Bill Murray’s character has built his own nuclear weapons (?!?!?!) and stowed them away on the satellite in hopes of defending America! Allison doesn’t like this so as a grand gesture to her Brian uploads a program that destroys the satellite mere minutes after we find out that in addition to negotiating with local populations he is also a computer programmer capable of undoing a Chinese hack that was trying to cripple the satellite prior to launch. (Yes – I wish I were making this up too.)

This act wins back Allison’s heart but the threat of jail time for destroying a piece of U.S. Military equipment means their time together will probably be short. But don’t worry – the big general (Alec Baldwin) happily announces that they didn’t know Bill Murray was hiding nukes on the satellite either so Brian is actually a hero and all is forgiven! Brian and Allison get together, Tracy and her husband call off the divorce, Brian now has a daughter, and everything is wonderful!

I realize I just spoiled the entire movie but honestly, if you were still willing to see it after reading this, you deserve to be spoiled. 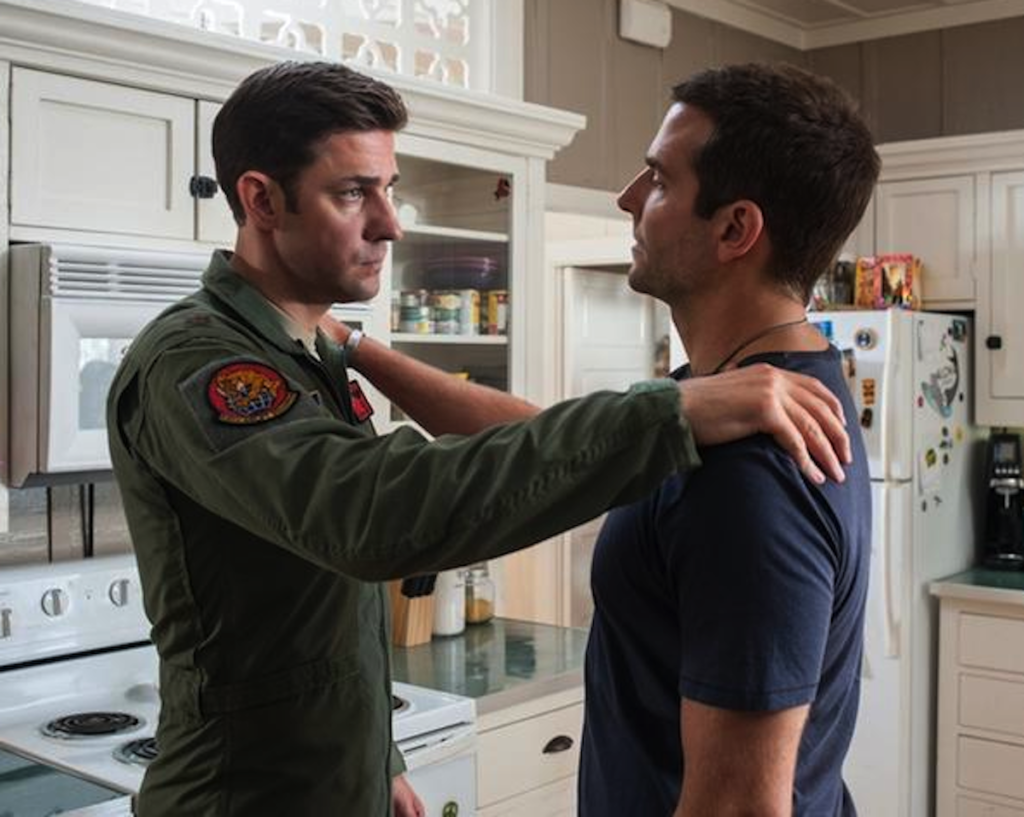 And as you could probably tell from that loose description of the plot, the film is all over the place in just about every way imaginable. Another great example of this is a scene where Brian and Tracy’s notoriously quiet husband have a heart-to-heart without actually saying any words. Instead they merely look at and touch each other with subtitles underneath expressing what’s actually being said between them. This kinda thing has been done before and in broader comedies can actually be quite funny, but in this case it goes on for way too long and happens incredibly late in the film when such a gimmicks feels wildly out of place.

With all of these missteps it seems like Crowe was genuinely asleep at the wheel for almost every step of the filmmaking process here. He claims to call it a love letter to Hawaii but even the photography of the land itself is flat and unappealing. Sure, he assembled an attractive cast that is capable of making the most of the screenplay’s truly bizarre turns, but even that aspect is squandered by the whitewashing claims that have plagued the film’s release. And even if you don’t completely buy into those complaint’s it’s hard not to wonder why Emma Stone’s “25% Hawaiian” character couldn’t have been a full-fledged Hawaiian woman.

I don’t usually go on for this long about a movie that I truly despised so I’m going to wrap things up assuming you get the point and leave things on a singular positive note: