‘AGENTS OF SHIELD’ Recap: “Who You Really Are” 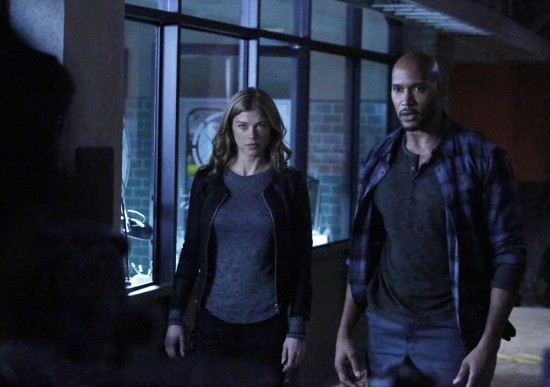 Behold, the return of Lady Sif! I would be lying if I said I hadn’t been looking forward to Jaimie Alexander’s guest arc, especially since it was promised she would be a little different this time around: not quite Warrior!Lady Sif, but rather, Confused!Lady Sif, who makes her presence known early on by assaulting a few random beach-goers in Portugal. She’s apparently looking for “Kava.” Who is Kava? No one knows. And who is this woman who has randomly wandered onto the beach? Turns out that’s not known, either.

Anyway, the episode really begins with May and Skye sparring — always a good place to start a story (in my opinion). May demonstrates some sweet Widow moves (and no, I will never get sick of picking those up, however random) and tells Skye she needs to embrace her emotions. Skye, still unsure of how to control her new powers, seems to be holding back, and May isn’t having it. To be fair, May’s doing what any good S.O. would do — pushing her student to be a smarter, more competent fighter. Unfortunately, she doesn’t know what Skye is dealing with, which makes their whole session a bit strained.

In the Bobbi and Hunter world, there’s sex. There’s a lot of sex. I’m thinking it feels pretty damn good to be Hunter and Bobbi. He tells her that Coulson offered him a permanent position with the team, and that he’s considering taking it. Bobbi seems surprised because you know, responsibility and all, but Hunter points out that their relationship was always strained by the fact that SHIELD came between them. Maybe this will help them work together better (in more ways than one, though I don’t think they need any help when it comes to the bedroom). Meanwhile, Coulson and Mack are semi-making up for last week’s fight. Coulson wants Mack in the field, despite the fact Mack doesn’t really want to participate in violence. They’re interrupted by a call from May, alerting them to what happened in Portugal. All hands on deck — we’ve got an Asgardian on the loose!

Turns out that Sif has willingly turned herself over to authorities, which at least makes things easier. Coulson and May start to question her, finding out that at least she remembers Asgard, but she has no idea who she is. She has no idea who anyone else is, either, which makes for some amusing moments, including a fun Easter Egg when Coulson introduces himself as “Son of Coul,” Thor’s resident nickname for him. May comes to their rescue with a video that Skye found (twitter is so helpful) that shows Sif fighting — and being bested by — a mysterious man on a pier.

The unnamed man (Eddie McClintock, of Warehouse 13 fame), who is carrying what looks like a small hammer, attacks another random woman and seemingly takes her memory away while changing into a blue Kree color. As Coulson prepares to hunt the man down, Simmons calls and tells them she’s made their weapons more dangerous, something which Fitz is unnerved by thanks to Simmons’ reactions to Raina last week.

While Coulson and May bring Sif back to the pier to try to jog her memories (and no, even mentioning Thor doesn’t work, though it does give May a nice moment to gush) Bobbi and Skye go question the locals. Hunter, Mack and Fitz find a tissue sample that turns out to be liquid nitrogen, and Coulson and May find a peddler on the beach who tells him that his balloons are stolen. Smart Simmons quickly puts the pieces together: the man stole the helium tank valves to help store the liquid nitrogen, and Bobbi and Skye find him while he’s literally re-charging (and also, literally the color blue.) Bobbi puts up a damn good fight, and do I mean a damn good fight, but the man gets the best of her, and in a moment of bad timing, Skye starts to lose it. The whole place starts to shake as her emotions become uncontrollable, and the man flees.

The team determines that the man is a Kree based on his blue skin, and Sif remembers that “kava” is a word for “key,” not a name. May finds a city named Chavez in Portugal, which Sif recognizes means “key,” and remembers that’s where the Kree was headed. Coulson backs that up by remembering Whitehall’s notes, and off our heroes go, with Skye choosing to stay behind, feigning injuries from their earlier attack. She’s waffling on whether or not to spill the beans on her powers after what happened with Bobbi, but Fitz encourages her to wait, mostly out of fear of how the others will react. It’s clear that May doesn’t believe her excuses, but she lets her off the hook anyway, with a look that could probably kill. Meanwhile, Bobbi and Hunter are having their own private pow-wow of secrets again. Bobbi tells Mack that Hunter is planning on staying, and wants to tell him about their secret. Mack is absolutely not on board with this, and he wants Hunter gone in case he sides with Coulson instead of them when it gets revealed. This whole secrets thing gets curiouser and curiouser — my primary theory is still that they’re doing work for Fury that possibly relates to the Avengers and will tie in to some Ultron events, but at this point, it could be anything. Mack suggests that the best thing she can do is push Hunter away so that if things do work out, they have a chance at happiness. Bobbi is uncomfortable with this idea, as she’s just starting to mend their relationship, plus she doesn’t think Hunter is as terrible as Mack says he is. Something tells me Bobbi’s going to lose this war.

Coulson’s team finds the Kree easily as he’s trying to secure a crate, and Sif and Coulson interrogate him. He claims he can bring Sif’s memories back with his magical baton, aka the truncheon, which Bobbi has taken to examine. She’s interrupted by Hunter, who tries to flirt and talk with her, but Bobbi pushes him away and picks a fight, much to Hunter’s annoyance. I will go down with this ship, which is something I probably would not have said earlier this season, so kudos to Adrianne Palicki and Nick Blood for having the best chemistry in the world.

The Kree says the truncheon only works for him, and to prove it, he stabs Sif — thus giving the warrior her memories back. She soon remembers that she was sent to Midgard by Odin (or, uh…LOKI?) when Heimdall saw that a Kree had landed here. She then tells him about terrigenesis, where individuals on a bunch of planets were transformed to be used as soldiers in the Kree’s war. The crusade built a city and left the diviners, and according to the Kree man, there are enough diviners to create an army. They’re supposed to be in the crate, but fortunately for our heroes, they’re not, and it’s assumed they must have all been taken in the 1940’s — possibly by Hydra. To be frank, this whole segment was a heck of a lot of info dump in a confusing way, but at least it gave us more information about the diviners.

Simmons finds Skye’s DNA in the lab by accident and Fitz manages to pass it off as a simulation. But Skye begins to freak out when the Kree talks about Raina and how change might not appear outright. May soon realizes that Skye’s the one causing the apparent earthquake, and Skye owns up to her powers, wrecking havoc when Sif tries to attack her. It’s actually a really fun and interesting way to (accidentally) have Skye reveal her powers, and I’m really glad that the show got that out into the open so quickly, rather than dragging it out another few episodes. We already know Skye can’t control them.

Sif doesn’t want to hurt Skye, though, not really — she recognizes that Skye didn’t choose to be like this, but she wants Skye to come to Asgard so she’s away from Earth, where she can cause potential danger. May and Coulson refuse this offer, and May helps Skye run while the place continues to go haywire. Fitz runs after them, which causes Simmons to realize that he had been lying to her. As the Kree pursues Skye, he runs into Mack and Bobbi and Hunter and Mack asks Bobbi if they should call “back-up,” before him and Hunter start fighting. As per usual, the Kree bests them easily, but Bobbi takes him on for the second time — this time with her trusty and deadly batons — and manages to distract him enough so that Hunter can shoot him with an alien gun. Bobbi then turns the truncheon on him, which subdues him. Again, can I just say Agents of S.H.I.E.L.D. has been firing on all cylinders this season? From the fights to the stories…this is a damn good show.

May and Skye seal themselves into Ward’s old holding cell while May tries to get Skye to calm down, telling her they can stop it. Skye’s too scared, though, and Sif’s still after her, and in an effort to save everyone from herself, she shoots herself with Simmons’ I.C.E.R. just as Sif breaks through the room’s barrier. The sight is enough to make Sif stand down, as Coulson argues that she’s trying to protect herself — she doesn’t want to hurt anyone.

Coulson and May bring Sif and the now-subdued Kree to a clearing where they can use the Bifrost to get home, and Sif warns Coulson that Skye may be involved in something she can’t alter — even as much as she wants to. May reluctantly agrees Sif might be right, reminding Coulson of how he returned from the dead with alien DNA of a city, and what that did to him. Back at the Bus, tensions are running high. Simmons is upset Fitz lied to her, but so are Mack, Bobbi and Hunter. They all believe they should’ve been told about Skye as she’s a legitimate danger, while Simmons insists that despite how she was talking about Raina, she would never hurt her own friend. The yelling gets out of control and Skye hears it all — and she flees, clearly feeling terrified and alone. Poor Skye. I just really want someone to give her a hug.

Oh, but the drama doesn’t end there! Hunter wants to know what secrets Mack is keeping, as he overhead him talk to Bobbi about “back-up” during the fight. He knows about the flash drive — and that there’s no support group — so what the hell is up? Yeah, Mack’s not going to answer that. He attacks Hunter, who passes out, and I’m just waiting to see how Bobbi reacts to this. Something tells me she’s not going to be happy with her friend, even if he thought he was probably trying to protect her.

Next week: Cal’s Index of villains! And some serious Marvel Easter Eggs are going to be dropped…are you ready?