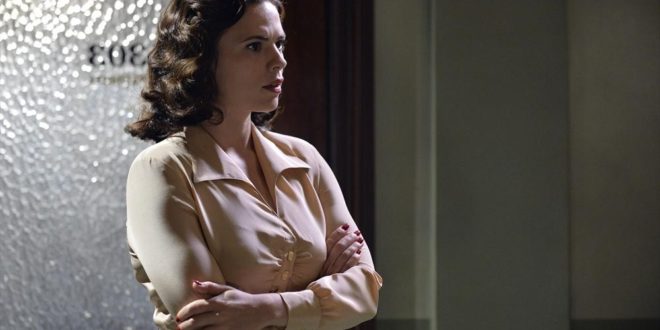 Agent Carter‘s third outing was exactly the type of hour you would want from an espionage show. And sure, maybe there was a little less mythology — whereas last week, we had to set the stage for the bigger picture, this week was about the quieter moments — but it was those quieter moments that helped drive the show forward, cementing our investment. We saw more of Peggy and Jarvis’ relationship, we saw the beginnings of a real camaraderie between Peggy and Angie, we saw more of what Peggy does and deals with outside her life when she’s not on double agent duty, we got an in-depth look at the SSR team (RIP, Krzeminski). In a show that only has 8 episodes, this kind of character building is intensely important.

Much of the mythology we already know was nudged forward in this hour. Chief Dooley and Agent Krzeminski search Brannis’ hotel room, finding not only passports, but also his typewriter. They also find out that Brannis apparently died two years ago. Souza alerts them that the license plate that they found in the wreckage last week belonged to Howard Stark’s car, which leads them to pay a visit to Stark’s house — where Peggy is already grilling her new best friend and super spy ally about how Stark’s vault was compromised.

Jarvis manages to smooth talk the boys into believing his story about Stark’s car being stolen and keeps Peggy hidden inside the house (go, Jarvis!) But he’s forced to go down to the offices anyway for an “interrogation,” which Peggy uncomfortably observes, learning about Jarvis’ apparent treason. This scene led to one of the most emotionally charged moments of the episode, when Peggy sacrifices her already shaky presence in the workplace to save Jarvis, who walks free when she conveniently “loses” the evidence of the stolen car report. It was almost physically painful to watch Peggy as she was berated, shot down, and demeaned in front of her male superiors, and most of that was due to the incredible Hayley Atwell, who managed to show us proof that even the toughest are fragile. As I said on Twitter, this is the reason that I adore the show so much. We get to explore Peggy’s strengths and weaknesses and good moments and bad moments, as much as we also explore her ass kicking and achievements and accomplishments.

Back at Jarvis’ house, Peggy is still searching for clues about Stark’s vault, and they end up making their way down the hole in the vault into the sewer. Jarvis is still being tight-lipped about the treason charges, but eventually opens up and tells Peggy that while in the war, he fell in love with a Jewish woman named Anna, who would become his wife. He tried to save her by forging the general’s signature, but was caught, which led to his treason charge, and Howard ended up saving them. I really liked that we got this personal glimpse into Jarvis’ life, and that we’ve established he’s just more than someone with a “fishy” past. We had already learned about his wife and this gives his backstory weight, while also providing a greater tie to Peggy, as they’ve both sacrificed things for the sake of people that they loved.

Peggy theorizes that Brannis was able to use storm water to float the technology out of the sewer, and finds a ship with the symbol that Brannis had drawn in the dirt. It leads them to the dock, where they come across a ship that has boxes marked with Stark Industries — presumably, a bunch of weapons. Peggy wants to call the weapons in, in hopes that it’ll help her look better after her demoralizing meeting, but Jarvis convinces her that it will only make things worse and calls instead while disguising his voice. They’re both attacked out of the blue by a man on the boat, who says Brannis warned him that “one of you” would be coming, and an intense fight ensues that ends with Peggy getting the upper hand after she stabs the man with a weapon from Stark’s stash called “the constrictor.” Sousa and Krzeminski show up to detain the man and take charge of the situation, and Krzeminski ends up being the one to drive the man back after taking him into custody. He starts opening his mouth about an Englishwoman, but before Krzeminski can start putting things together, a car bumps him from behind. When he gets out to investigate, a mystery man shoots both him and the man from the boat, leaving him for dead. Seems like someone is really going to a lot of trouble to keep people away from discovering secrets.

I feel like we got a lot of insight into Peggy’s character last week, but on a very broad level (we know she has feelings, we know she can kick ass, we know she’s capable and maybe even a little closed off when it comes to relationships). But this whole episode was really a study of Peggy as she exists beyond those constructs. Every situation she encountered — starting with her run-in with Jimmy, the man who would ultimately get one of the girls kicked out of housing — served to chip away at her armor a little more and a little more, until by the time we got to the end of the hour, Peggy was so broken and lost that she couldn’t keep up her facade anymore. And maybe all she needed was a cup of coffee and a hell of a lot of booze with her soon-to-be-BFF, but sometimes, no matter how strong you are, you have to break in order to be put back together. Peggy Carter showed us that tonight.

What did you think of the episode?

Previous Review: This Limo Goes to Crazy-Town on Week 2 of ‘The Bachelor’
Next ‘Parks and Recreation’ Recap: From the Future