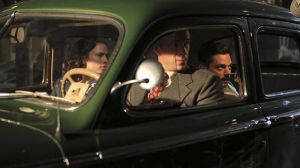 Maybe I’m in the minority, but I’m feeling like Agent Carter has found its groove. With an action packed two-parter and a third, more languid hour of storytelling, the fourth installment of Peggy Carter’s story — the midway part of this series — was , to me, the perfect mix of all the right things: action, mystery, emotion, not to mention fun cameos and solid storytelling. And we were brought right into it with the very beginning of the hour, as Jarvis and Peggy worked out a deal that involved a suitcase, a couple of shady men, and a lot of money. (Jarvis is getting better at being undercover, by the way, and maybe he still has a lot to learn but it doesn’t stop me from wanting the Peggy and Jarvis Spy Hour.) The men are working for someone named Mr. Mink, and despite their best efforts, essentially get their asses handed to them on a silver platter both Peggy and Jarvis. (Did I mention that during this entire exchange, Peggy not only effortlessly takes care of the guys giving her trouble but also knocks them out with her heels? HER HEELS. If that’s not a good opening scene, I don’t know what is.)

Turns out that the “cargo” Mr. Mink is transporting is none other than one Howard Stark, whom both Peggy and Jarvis are less than pleased to see. That doesn’t stop Peggy from allowing Howard to hide out with her in The Griffith, however, knowing that he can’t go back to his own house. She manages to sneak him in by having him hide in the dumbwaiter, and even manages to throw off Mrs. Fry thanks to some quick thinking. To see Peggy breaking the “rules” of her new home is pretty delightful, and I think my favorite thing about this show is that it routinely allows Peggy to be…well…human. We see her being vulnerable, we see her worrying about her friends and her relationships, we see her as she deals with the sorts of situations women would have dealt with in this time period – even if those situations aren’t necessarily ones that we would think Peggy Carter would deal with.

Meanwhile, back at the SSR office, Dooley plans to go to Germany to talk to a Nazi named Mueller, who may have some intel on the disappearing Russians. With Dooley out of town, Thompson mandates all the agents to work extra hard on the Stark case, though Souza manages to get out of it by taking initiative and going down to the wharf to see if he can investigate the anonymous call. Between Peggy trying to talk him out of going down there and the almost-completed sketch at the end of the hour, it seems as though we’re inching closer and closer to Souza discovering Peggy’s secret. And while I’m not sure this is evidence enough to believe that he could end up being Peggy’s mysterious husband, I do think that we could definitely see him as an ally should the show go to a second season – if not before.

After Peggy rescues Howard (not from the dumbwaiter, but rather, from another woman’s room) the two finally find some privacy in which to reconcile. I’ve loved Atwell and Cooper’s chemistry since the first Captain America movie, and that love has only intensified in the past few times I’ve gotten to see them interact on screen together. It’s not only believable, it’s sharp and charming, and even though I know that Dominic Cooper is only around for a handful of episodes, I want to see a lot more of it.

Howard tells her he’s leaving for Rio in three days, and shows off some really nifty secret camera pen. He then legitimately invents the selfie about 80 years before it will actually probably be developed, go figure. Peggy is unimpressed, but she ends up finding this invention useful when she uses it to take pictures of the inventions that the SSR is investigating in the lab. (And I guarantee she will learn to appreciate selfies.) Meanwhile, Souza finds two hobos that he questions about what happened on the Heartbreak, and takes one into custody.

While Mr. Mink is showing off his unhappiness with his associates’ failures (by killing them, obviously), Howard is again romancing another woman in The Griffith, much to Peggy’s dismay. Like father, like son, apparently. They begin developing the film from the camera pen when they’re interrupted by the ever well-meaning Angie. She’ll be best friends with Peggy yet!

(Sidenote: one day, I want to grow up and be the person Peggy Carter is teaching me to be. I mean, the girl dismantles a bomb in her bathroom and has a darkroom in her bedroom! I can’t do anything that cool in my apartment.)

When Peggy returns to Howard, he tells her that all his inventions have been taken but Peggy needs to steal one back, because it’s dangerous and potentially destructive. Souza’s hobo is refusing to talk, but some liquor and food do the trick and soon he’s rambling about a woman and a man that he saw on the boat – though not the woman from the club that Souza is showing him in the photo. Dooley is having his own interrogation over in Germany, where he’s offering Mueller a cyanide pill in exchange for information, but unfortunately doesn’t get much in return.

Peggy manages to overhear Souza and Thompson talking about the information they got from Souza’s informant, before she goes to swap out the Blitzkrieg button. Inside is a vial containing what looks like blood, and Peggy has just enough time to process this before she’s forced to hide in an interrogation room where Thompson happens to be. We get another intense, gut-wrenching scene where Thompson point blank tells her that she’ll never be treated as an equal as long as she’s a woman, and damn, Hayley Atwell is just phenomenal in this role. She brings everything that you would want to Peggy – vulnerability, emotional strength, and also a sense of courage and determination that you can see even underneath all the hurt that she has to fight through. I’m so glad that this is a character that exists on our screens.

When Peggy returns to Howard, she’s on edge – and rightfully so. It’s probably a bad time for Howard to use that moment to tell her that the vial she’s holding contains Steve Rogers’ blood, and I’m not going to lie, he pretty much deserves that slap. To be honest, I felt like I needed a slap after that bombshell, which I did not expect. He tells Peggy about Project Rebirth, and how he was one of the lead scientists on it, and that the government is out to get what’s left of the serum. Howard wants to use it to change the world – “Steve Rogers can save millions of people” – but this is too much for Peggy who has basically had it and leaves, telling Howard to leave as well. I know this is Peggy’s story through and through but I really, really enjoy how the show is using Steve Rogers to bind everything together, and in a way that doesn’t feel overpowering. Captain America is vital to this story, and between the radio show and the continued references in conversation and now the vial that makes it clear just how important Steve was to two different people, we’re reminded of the very reason that Peggy is here in the first place.

Mr. Mink, who has decided he’ll get rid of Peggy himself, tries to bring her flowers but is denied thanks to Mrs. Fry. He manages to catch the room number, however, and attempts to assassinate her when he’s met with a surprise: Dottie Underwood, who asks for his revolver and then takes him down with what you should recognize as some awesome signature Black Widow moves.

And lest I be wrong in my assumptions, especially based on what we saw in the trailer for next week where we’ll be traveling to Russia and visiting the infamous Red Room of Natasha Romanoff’s childhood, let me just say it now: Dottie Underwood is one of the first Black Widows. I am so, so beyond excited for this character development, not only because I love Bridget Regan and know what she can bring to an emotional and action-oriented role but also because I’m a huge Natasha fan, and any evidence or backstory of the Red Room and the girls that were trained there will make me the happiest Marvel fan alive.

Peggy calls out Jarvis for knowing about Steve’s blood and not telling her, and Jarvis goes to Stark and tells him that he’s tired of apologizing for all his mistakes. (We also get a nice cameo here from Stan Lee, which is always fun.)

And so we end with secrets: Peggy opening her wall and hiding evidence of her mission, Dottie hiding a dead Mr. Mink under her bed while looking way too happy to be holding his pretty pistol, and that darn Fringe-like typewriter taking on a mind of its own. Til next week?

@theworkprint
Follow
Previous article
Review: “The Bachelor” Just Keeps Getting Dumber and Dumber (and Dumber)
Next article
‘The Americans’ Star Matthew Rhys Talks Season 3 and Life as a “Luddite”