A Reqiuem For A Team: Venture Brothers Cancelled

Alas, All great things must come to an end…. And it’s come to that. The Venture Brothers is Cancelled 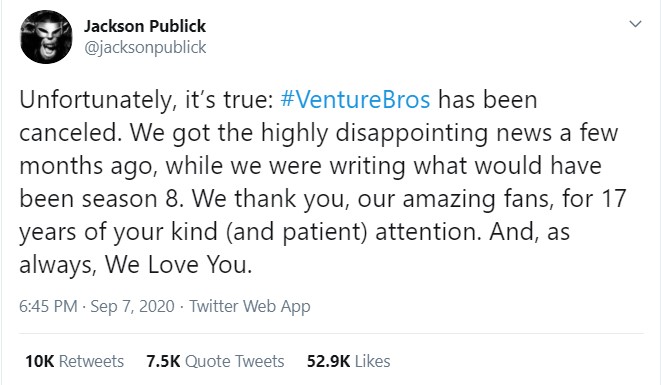 This is not exactly a eulogy to the Venture Brothers as much as it is a celebration of what they brought to us. Born of the mind of Tick writer Jackson Publick, Venture Brothers started out as a joint venture. A passion project where Publick recruited his main man, Doc Hammer, a bad-assed painter and, personally, whom I would call a philosopher. Together, this duo had undertaken the responsibilities of adopting a cartoon parody of the Hardy Boys meets Johnny Quest, though all in homage to the Hannah Barbara era of cartoons.

Yet, there was maturation overtime over what writers Jackson Publick and Doc Hammer thought what the state of cartoons should be. With seven seasons created by themselves and a team of talented individuals, The Venture Brothers excelled at generating a giggle, poking fun at a trope, and making us feel things about what it means to awkwardly grow, and more importantly, fail in life. Creating many beautifully flawed characters, throwaways at first, that fans wanted and fleshed them out into ones you wanted onto the screen. From Dr. Girlfriend to Dr. Ex-Girlfriend to … From the Henchmen of 21 and 24…. 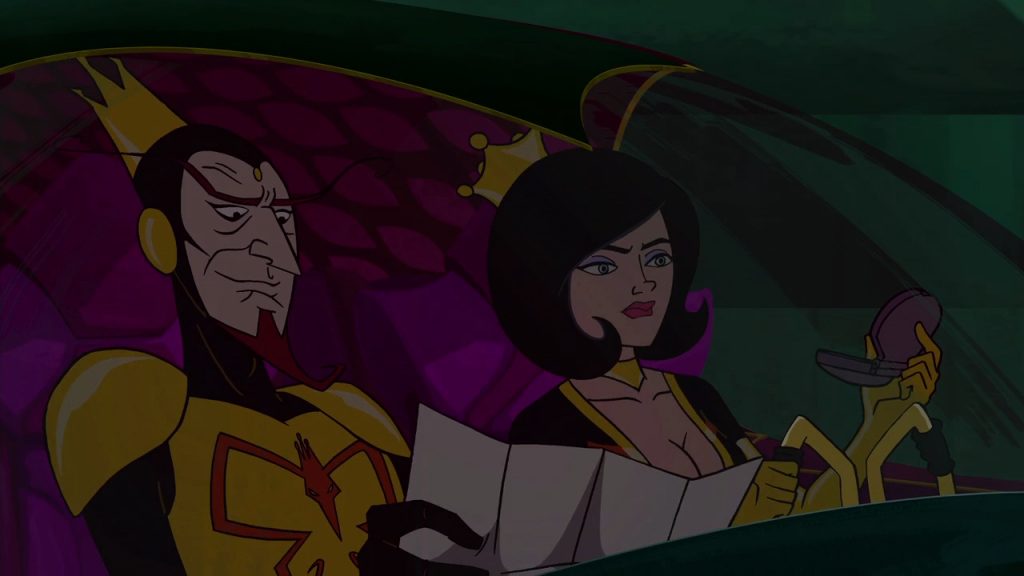 Because you know you cried when 24 died. You probably also celebrated when Henchman 21 grew some balls, got cut, and basically became the Monarch’s aide de camp. We’ve seen Billy Quizboy (surely a nice reference to the kid in Magnolia) and Pete White (surely a nice reference to Dave Sylvian) and how they’ve grown into a family. Seen how both Brock and his, let’s just say its counterpart, Dr. Hatred (basically their avuncular body-guard) served as a better father to the titular characters than Rusty Venture ever had been.

The brothers have come away with a PTSD that a therapist couldn’t ever grapple with, so they, in essence, soar with it. They ride the wave and feel those unwanted feelings until reality hits them about how they are replaceable. Most budding young men would freak the fuck out, but they are Ventures. They come from SCIENCE. They come from a systemic situation that pits them into weird situations like a masturbation booth, exotic civilizations, and outer space… all without their knowledge or know-how. What’s beautiful about this show is seeing how the brothers learn. How they grow up. How they’re educated out of their silly little sleep beds and by their father, a ‘self-proclaimed genius’ trying to outdo his other brother that he was attached to in the womb. The brothers learn on their adventures. They go through romances, break ups, heartaches, and then remakes. 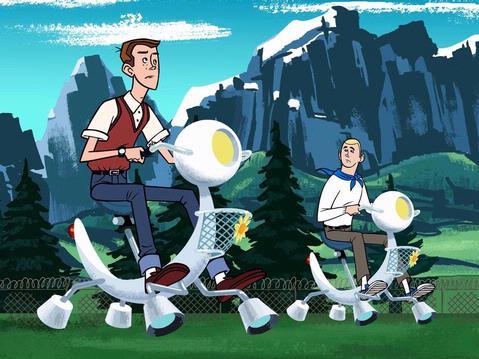 Meanwhile, their father, Rusty Venture is too busy equally self-loathing as he is loving himself. So much so that he ignores his own family and his own masturbatory feud with the Monarch. A rivalry that’s actually been borne from childhood. Both are petty. Both have guns and shrink rays and any stupid thing you can say. This is where the broth simmers and this is what makes the series great. You see, the Monarch hates Dr. Venture (as most do) because he has the toys. He thinks he’s a playboy but in actuality, Rusty is a failure with his Father’s name. But so is Monarch, because if he and his well-meaning Wife and their only two henchmen were not on his side, Monarch would be nothing as well.

Again I stress this show was nothing shy of amazing. This is a show that honestly put me on to humor. As a TV writer, it’s one of those shows that defies genre that you can put on the lampshade. That puts the jokes front and center where you can’t help but laugh. Their stupid humor is always intelligently writ. Both Doc and Jackson take those beats of what is funny… or just makes them fucking laugh! And it’s brilliant! 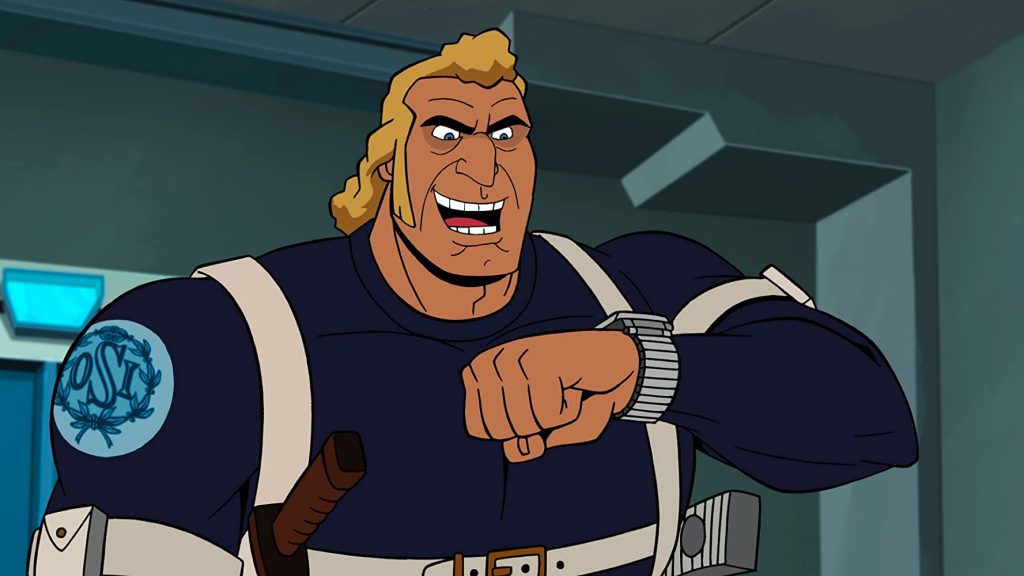 This is not the end of them, I guarantee you. The two writers Ventures’ in twain will do better things. Who knows? Wrap it up into a movie? There are so many characters they still would love to write for! Hulu? Grease their palms with silver! Netflix? I’d be so down for that!

The thing is this is a series that talks and handles about PEOPLE, not idiots that have superhuman powers- PEOPLE. It’s about what they go through, the struggles, and how they may or may not come out from it. It’s, dares I say, the nigh-perfect show. So, if you can find it in your heart, write to your ADULTSWIM, write to your comptroller, write to you Senator and bring this show fucking back. It is a salve on our mosquito bite of a nation. It is an ice cube on our hot face. It is the Ben to your Jerry.

Previous article
The Oscars Change Rules to Feature More Diversity
Next article
‘Dune’ Trailer: On Arrakis a Crusade is Coming