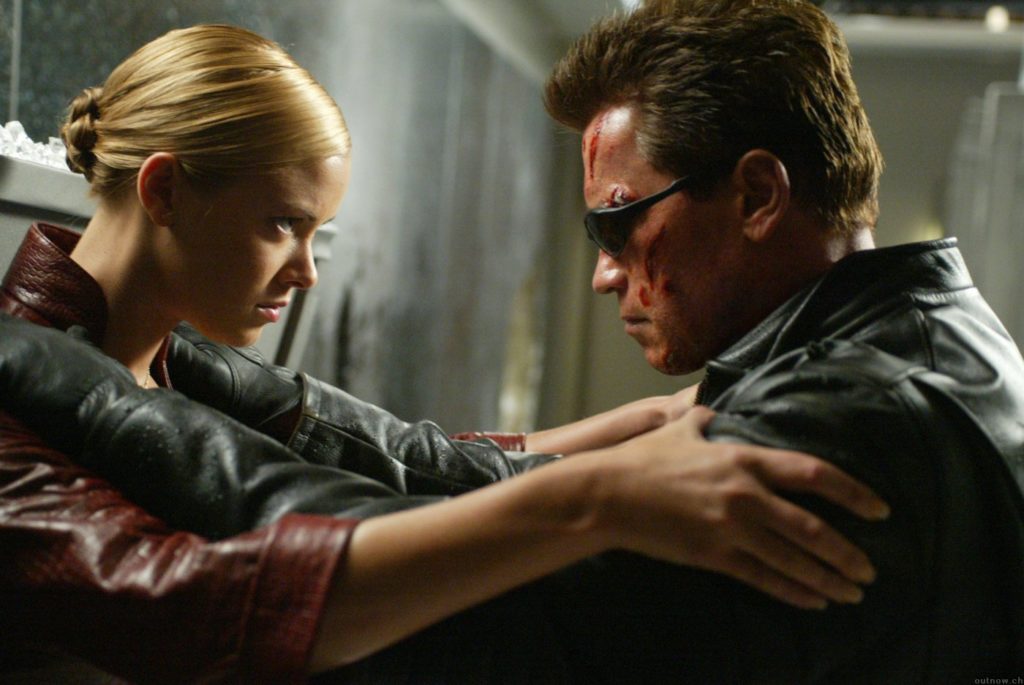 Aside from being the one we dare not speak of, it’s the one that leaves you with a hand full of awful head shaking moments. There’s nothing redeeming about this movie until the end for two reasons. First, it mercifully releases you from the abominable kitsch and derivative action. Secondly, the nukes go off- the nukes go off – Skynet wins, and the crowd goes wild! Ahhhh!

It’s about money. Clearly the studio was trying to squeeze all the residual juice from Arnold before he got too old play the Terminator. Wait – what?

2003. And if I told you Arnold wore a pukka shell necklace, I would be lying. But the movie’s so bad it’s conceivable that storyboards of this exist out there.

Saving John Connor AND Kate Brewster, who turns out to be his future wife? T-800, you matchmaker.

The new T-X, (also called the Terminatrix, *sigh*) an enhanced battle chassis with a liquid metal exterior. It’s also a lady-bot with expandable boobs (*sigh again*). And I guess she’s got an arm-canon/flamethrower thing but she barely uses it in favor of tossing people like she’s in The Wolf of Wall Street.

But if we’re being honest, this is the best:

Adequate. Both the T-800 and the T-X have some more sophisticated programming to help in their infiltration capabilities (see above re: boobs). Unfortunately, the T-X still thinks the best way to kill a human is to toss him around, rather than immediately crushing him in its robot hands.

A departure for the series (and Sarah Connor’s favorite motto “No fate but what you make”), the film posits that Judgment Day is inevitable, no matter what John Connor does to try and stop it. Nevertheless, both humans and robots feel the need to send agents back to try and alter the timeline, no matter how inevitable certain events are. The film itself causes a sort of time dilation anomaly, with its 109 minutes feeling like an eternity. 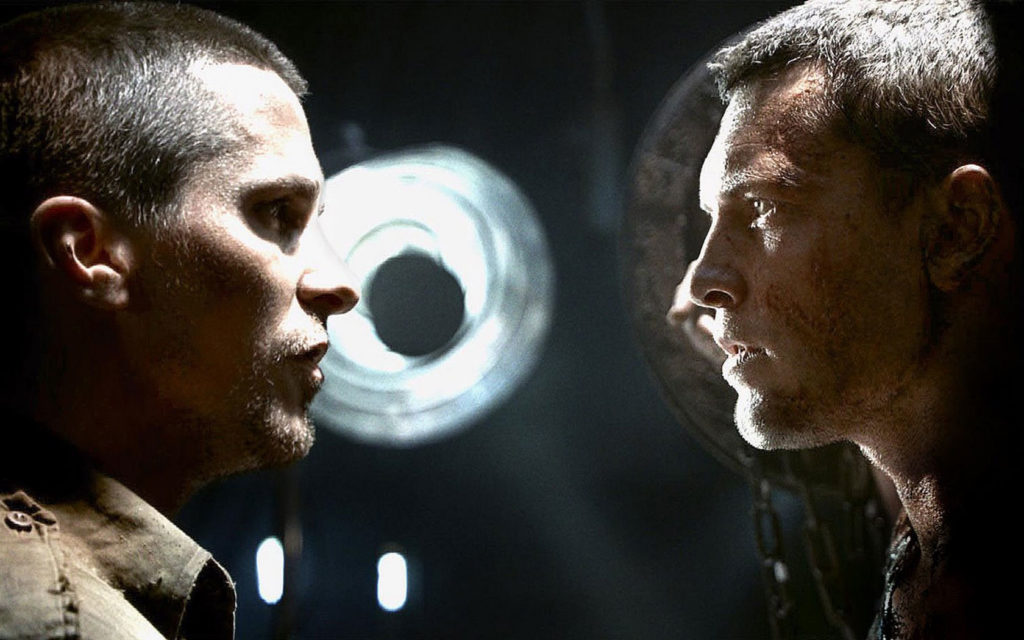 For years we’ve been teased about a future war where man and machine duke it out. We’ve seen glimpses of machines crushing skulls with their feet, purple rocket blasts, and Mad Max cars making a cameo – it looks awesome. They’ve been teasing us about it for three movies like an imminent dessert if we finished our vegetables (aka T3). Well this is it – dessert time. Society has crumbled, rusted out cars litter the road, and robots are hunting us. It’s awesome!

(Note: there is dispute among those writing this as to how awesome this movie actually is.)

Marcus Wright, a convicted felon on death row, donates his body to science and wakes from the dead 15 years later in a post-apocalyptic hellhole. He meets up with Kyle Reese (John Connor’s pop-pop, for those unfamiliar) and the two become friends heading towards the Resistance headquarters until Reese is captured and taken to Skynet headquarters. Marcus meets a Resistance fighter who takes him to their Headquarter where we find out he’s (sort of-kind of) a robot – dum Dum DUM! Marcus ends up escaping their capture heading toward skynet to find Kyle who John Connor is also keen on saving – if not solely to save his own creation.

When he arrives he learns that his true mission all along was to lure John Connor to them so that they might defeat him. He’s the Termi-bait-or……I’ll let myself out.

Depending on how you look at it, either lying in wait in a foggy cubicle ready to rumble in the third act, or sipping Mai Tais in Santa Monica counting the money he made off his digital likeness.

Replacing Arnold with Sam in this – he’s fighting Skynet robots, trying to not fight Resistance humans, and eventually battling a stripped down (to his “bones”) Arnold.

Again I’m gonna cheat (don’t play cards with me) and merge the scene where people are getting snatched up by a claw machine’s ideal body and the scene where Kyle Reese and Marcus Wright are fleeing sentient crotch rockets.

Off the charts. Sam Worthington is so good doesn’t even know he’s a robot. The only problem is that Skynet forgot to tell him that he was the bad robot in this film. But in terms of Terminators he’s easily the most personable, he’s so human that he’s able to get a Resistance fighter to free him.

Terminator: Salvation doesn’t actually feature time travel in its main plot. Unless you count Sam Worthington traveling to the future, at a regular pace, while unconscious.

@theworkprint
Follow
Previous articleUSA Renews ‘Suits’ for a Sixth Season
Next articleThe Bachelorette Review: Could This Crap Get ANY Dumber?