In preparation for the upcoming release of Terminator: Genisys, we’re taking a look back at the Terminator franchise, starting with The Terminator and Terminator 2: Judgment Day. 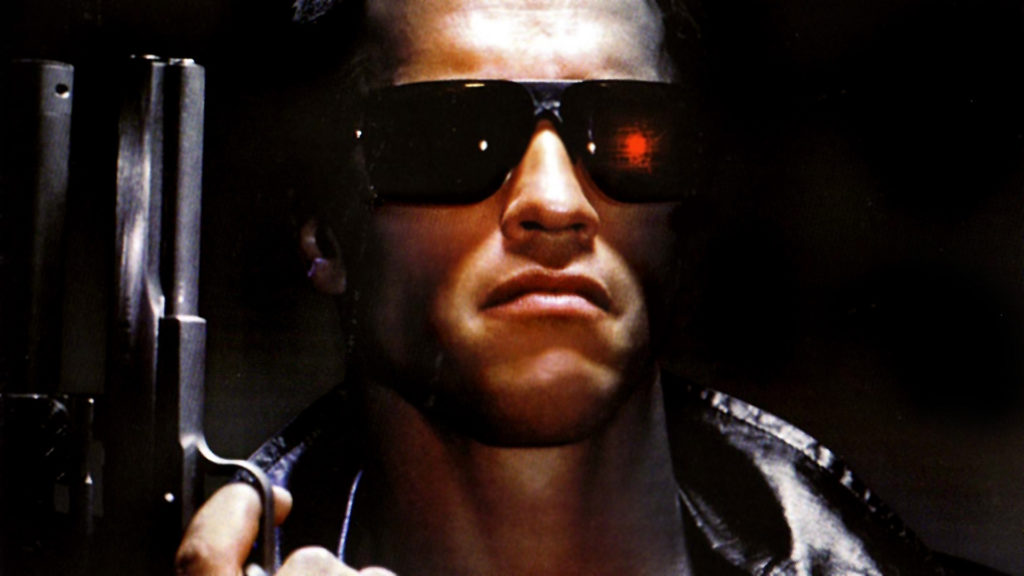 A sentient machine system has revolted against humanity in the future, and sends a terminator back in time to assassinate Sarah Connor, the mother of the future leader of the human resistance. The humans, meanwhile, send back Kyle Reese to protect her.

Sarah’s first encounter with the Terminator in the Tech Noir club, a scene that has a little bit of everything: tension, action, a bit of style, and the first taste of the unstoppable death machine that is the terminator.

Poor. The Terminator, designed as an infiltration and assassination unit, has an unsophisticated, brute force and telephone-book-based approach to finding its targets. Also, it’s eyebrows spontaneously disappear at one point, which really makes it difficult to blend in.

“No fate but what you make.” Both sides are sending back agents to try and alter the timeline on their favor, paradoxes be damned.

The best one, without a doubt. This is the movie that defined the franchise. It’s also the one with the liquid metal T-1000.

The Terminator is back! But this time he’s the good guy – saving John Connor, scaring the crap out of his mom and looking badass on a Harley. (Although I’m gonna miss that station wagon from the first one.)

It didn’t take much to realize that Arnold was the best part of the first movie, so he’s the good guy now. He’s protecting a young John Connor and learning the nuances of human social interaction.

The T-1000. A creation that can maybe probably be attributed to an assumed epidemic of mercury poisonings throughout the 90s. Oh and a bunch of cops and swat officers – but he can’t kill them, so instead he’ll unload a minigun at their cars and not hit a single one. Because science.

Boy, it’s really hard to pick a best scene in this one. If you wanted to cheat (and I do) you could pick the scene where John and the Terminator break Sarah out of the psych ward and the T-1000 chases them out of the building on to the streets thereby combining two awesome scenes in one.

Although, Will would undoubtedly think that this is his absolute most favorite scene from the movie/his childhood, and it in no way shape or form gave him nightmares:

Satisfactory. The T-1000 is much better at both infiltrating (read: it knows to smile occasionally) and assassination (stabbing, rather than just tossing people around). John Connor, meanwhile, is teaching the T-800 how to be more human.

Similar to the first, both humans and machines send back agents to try to alter the timeline of events. Knowing their fate, however, Sarah and John try their best to stop Judgment Day from ever happening in the first place.