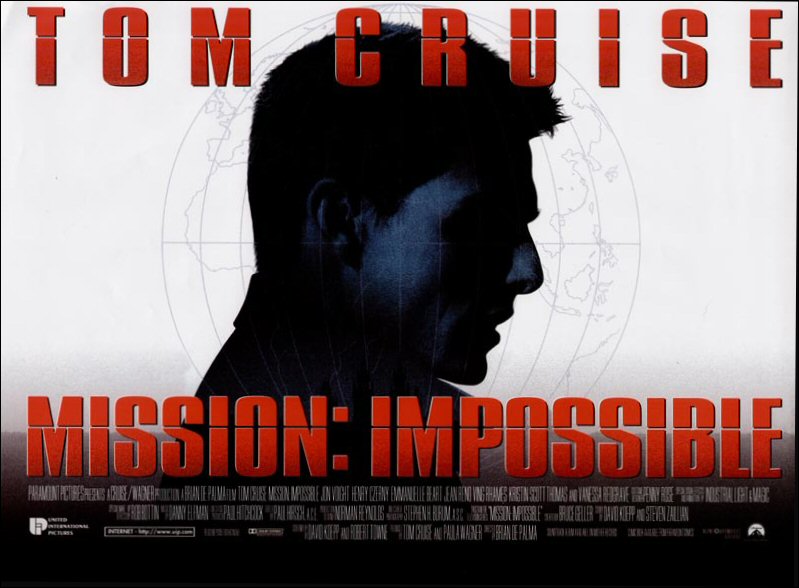 The first one. The one that started it all. The one that everyone I knew called “confusing”, which led critics who didn’t get it to call it “convoluted”, even though the film spelled everything out to the audience and paid them for their patience with kick-ass action sequences. The movie was the first project for “Cruise/Wagner Productions”, the former production company created by Tom Cruise. It was conceived using an $80 million dollar budget which was basically because of Cruise wanting a “big, flashy show”.

The movie also featured a $15 million dollar ad campaign from Apple. On top of featuring the PowerBook 540C, the company launched an immersive online game linked to the movie (something not many films did back then), had print ads in magazines and newspapers and even produced a commercial with scenes from the film.

The movie is very stylish. Having Brian De Palma at the helm does that to a film. Seriously, whether you want it or not, you’re getting style. If you were a family member and you handed the camcorder to your cousin, Brian De Palma, the part where you exchange vows with your S.O. would be really intense.

But his style works. The claustrophobic camera work and angular shots add a nice dimension to the paranoid mood of the film and Danny Elfman’s score is very much old school, brilliantly mimicking the tackiness of a 60’s spy show with heavy militaristic drums and horns — and the occasional bongo drum to smooth it all out because spies are hip, baby. Arguably, this might have been De Palma’s last good movie.

The film is everything great about Hitchcock merged with the WTF-is-going-on formula of the series.

The movie follows Ethan Hunt (Tom Cruise), an agent of the CIA’s off-the-books “IMF” (Impossible Missions Force) as he and his team shadow a man who has downloaded the CIA’s NOC List (a covert list of operatives and their code names) so that they can apprehend him and his mysterious buyer. However, after everyone in his crew ends up dead in what looks like a designed counter-strike, Ethan is framed for their deaths as well as embezzlement — his parents’ accounts suddenly appear to have hundreds of thousands of dollars in them. Hunt soon finds out that the man who stole the list in Prague was a “decoy”, part of a CIA counter-mission designed to draw out a mole in the organization — and they suspect Ethan was that mole. After escaping CIA custody and going off the IMF grid, Ethan vows to steal the real list directly from CIA Headquarters in Virginia in order to bait, draw out and confront the real person responsible — and clear his own name.

Easily, the “Vault Scene”. This is De Palma at his best. The vault contains a secret list of spies with both their code names and true names as well as their respective places of residence. Ethan Hunt (Tom Cruise) and his merry band of spy misfits from the “Disavowed List” (including series mainstay Ving Rhames as “Luther Stickell”) break into this room to steal the NOC List. The room has one guard and its very own ecosystem. When nobody is inside, the room is set at a constant temperature of 72 degrees, has a pressure-sensitive floor that can register a small drop of water falling on it and has a noise-detection system. If the temperature in the room goes to 73 or if anything hits the floor or anything above a whisper is heard, alarms and large men with guns raid the room.

The entire sequence is a master class in the art of the suspenseful cinematic heist and is as ironic a heist as they come: it doesn’t feature guns, a chase scene or explosions. It’s graceful, quiet and the entire scene leaves you absolutely breathless. You feel like you’re right there with him and you don’t want to breathe too heavy or even whisper for fear that, if you do, you’ll set off the alarm, too.

Kittridge: Why don’t we quietly get out of here and get on a plane? I can understand you’re very upset…

Jim Phelps: Of course. Just exactly WHEN he knew is something of a question. Mind telling me, Ethan? Before or after I showed up in London?

Ethan: Before London…but AFTER you took the Bible from the Drake Hotel in Chicago.

Jim: They stamped it, didn’t they? Those damn Gideons.

I have fond memories of this movie. I saw this right as I was graduating high school and everything was getting easy-going. I was invited out to see it with a friend of mine who was an intern at Apple. I wasn’t totally enthralled the first time around, mainly because I wasn’t paying attention. The second time made everything coherent. The film’s soundtrack was also the first CD I played after getting my very own car and I have fond memories of pumping the re-worked Mission: Impossible theme as I roared through the “mean streets” of Pleasanton. Awwwwsyeah. In all seriousness, I really like this film. I love the casting, the way the film was shot and I can even excuse the Jim Phelps thing. I liked the idea that he became disillusioned after the Cold War ended and turned his back on his country. It has great set pieces. The opening mission is expertly shot and it’s believable. It’s really too bad the second film had to ditch what intelligence the first film offered up…

@theworkprint
Follow
Previous articleBallers: “Everything is Everything” Review
Next article‘Silent Hills’ May Not Happen But Creators Kojima and Del Toro May Be Collaborating In The Future