On paper 7 Days in Hell sounds like a brilliant idea for a short film. The sports mockumentary, which takes inspiration from ESPN’s 30 for 30 series, follows two tennis professionals in a grueling seven day match at Wimbledon. A week-long tennis match seems outrageous, but it’s in the tennis duel where 7 Days in Hell truly shines. Unfortunately, aiming to be over the top in many of its jokes causes 7 Days in Hell from becoming a brilliant spoof on sports documentaries.

Over 42 minutes, the documentary expands on the origins of competitors Aaron Williams and Charles Poole and their road to the longest match in tennis history. Aaron Williams, played by Andy Samberg, is the bad boy of tennis. Left on the street as a child by his mother, Richard Williams, the father of tennis professionals Venus and Serena, adopts young Aaron and “reverse Blindsides” him into a rockstar tennis pro. His competitor Charles Poole, played by Game of Thrones’ Kit Harington, is a child tennis prodigy who lives in fear of his overbearing and controlling mother. Like Harington’s Jon Snow, Poole really does know nothing. Lacking a proper education, thanks to his mother sending him to lorry school to become a truck driver, Poole is a bit of a dimwit. His ex-girlfriend even claims talking to him “was like talking to a child with brain damage.” 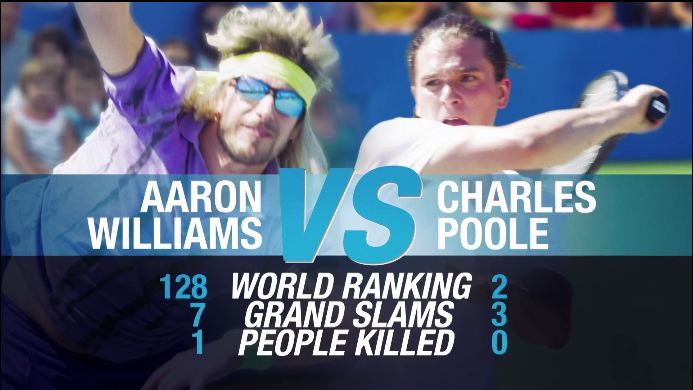 7 Days in Hell is littered with laughs throughout its run. Gags involving the art of courtroom drawings and the longest rally make up some of the best moments. However, events following Williams’ fall from tennis grace and the prolonged nature of the match start to drag down the mockumentary. There are multiple scenes involving male genitalia that would make you believe 7 Days in Hell was trying to bring balance to the male-to-female nudity ratio that was offset by HBO’s Game of Thrones.

In the end, 7 Days in Hell mostly works thanks to Samberg and Harington’s performances along with a slew of actor cameos that make for a memorable moments. If you’re looking for a quick laugh over the weekend and don’t mind copious amounts of nudity, then look no further than 7 Days in Hell. Indubitably.