‘Pretty Little Liars’ Review: Of Late I Think of Rosewood

So in preparation for season 6B of Pretty Little Liars and the time jump, I have re-watched every episode of the series. On that note, this episode begins in the empty hallways of good old Rosewood High as past dialogue from the Liars echo in the background. The choice of quotes were delightful and included classics such as:

and the always entertaining

Oh, the ghosts of Liars past will always haunt Rosewood High. The camera finally settles on the new RHS English teacher, Mrs. Alison DiLaurentis, the girl who spent less than two years actually in high school. Rosewood High really knows how to pick them. A judge has approved a hearing to evaluate Charlotte’s release from the hospital and that the Liars will need to be present at said hearing. To make sure that all four Liars come and say exactly what she wants them to say at the hearing, Alison writes a handwritten letter to the four girls, pleading her case.

The girls head back to Rosewood and meet up at The Brew. Emily is the first one there and secretly pops some pills before the other girls arrive. When the other three arrive the girls do a round of hugs, take a shit ton of selfies, and catch up on what the last 5 A-Free years were like.

So here is a quick recap of what each girl has been up to:

Spencer is living in DC after graduating from Georgetown and is working as a lobbyist. VERONICA IS RUNNING FOR SENATE. This is like my dream come true.

Hanna is engaged and travels the world for her fashion industry job. Mama Marin has also had her hands full over the past five years. She found some extra seed money in a few lasagna boxes, bought up Radley Sanitarium and made it into a swanky hotel! This, hands down, is my favorite thing that has happened during this five-year jump.

Aria is working for a publishing company in Boston and dating a man named Liam who may be further up Byron’s ass than Ezra was. I am not totally sure because every time Byron talks I go deaf with boredom.

Emily tells the girls that she is working at the Salk Institute, but really she is a bartender who serves pink drinks and roofied flasks. I am so confused about what fake job Emily could possibly have at the Salk Institute. I don’t think she has ever been interested in biology. Also, at some point during the five-year jump, Wayne Fields died, and Pam became British and only wants to talk about things over tea. 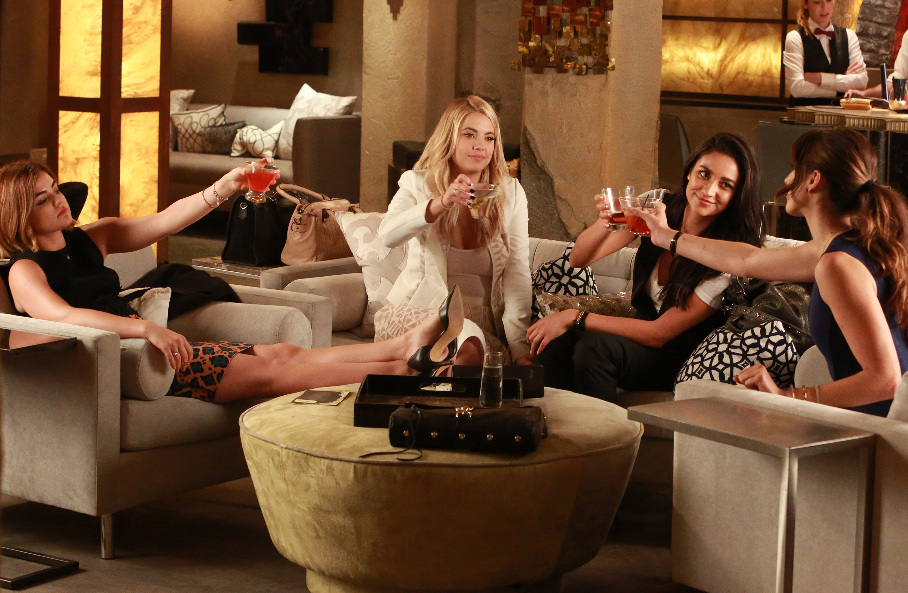 Aria goes back to The Brew and runs into Ezra who is now living in Toby’s old apartment above the shop. Over the past five years, Ezra has not only run a successful coffee shop, but he published a book and worked with Habitat for Humanity. While Habitating for Humanity in South America, his girlfriend Nicole got was kidnapped by revolutionaries. This has made it hard for him to write his second book and when Aria tell him that she and her bosses understand, Ezra has the audacity to say this:

“I don’t understand any of it. I don’t understand how a girl I met in this shop, who never hurt anybody could be dragged off by half-baked revolutionaries and no one can seem to find her. So you understand that, explain it to me. You go somewhere to help, it shouldn’t cost you your life.”

Let’s unpack this. First, is Aria one of Ezra’s publishers? Second, how is Ezra surprised that something scary and horrible happened to a girl that he met in The Brew located in THE TOWN OF ROSEWOOD? I am pretty sure that more people have disappeared from Rosewood than all other towns in the country combined. Second, you are going to unload your bag of whoa’s on Aria, the underage girl who you stalked and who was also almost murdered 500 times in a two-year period? I think out of anyone Aria understands that someone could disappear while in South America.

Spencer visits Toby at a random plot of land where he is building a house. I guess building a house is a lot harder than “renovating” an apartment above a coffee shop. He then takes her out on a rowboat on the lake out back, and then it starts pouring rain, and then they have passionate sex in the house he built. Oh, oops, for a second I thought I was watching The Notebook.

And next, the girls are at are at Veronica’s Rosewood Senate campaign. Oh man, I would have been happy to have watched an hour of Veronica Hastings campaign footage. That should be the PLL spinoff, Veronica Hastings’ political career. She has my vote any day. Anyway, Spencer parts from the other girls and heads to the stage. But before she gets there, Mona pops out from the shadows. Yes, Mona time! Of course both these girls would be working in politics. Mona reveals to Spencer that she still has nightmares about the dollhouse, and you remember that she was down there longer than anyone.

So apparently the whole point of this hearing is to determine whether the girls believe Charlotte still poses a threat. They all give the reasons they are not afraid of Charlotte anymore and each of their statements reflect each liar at their core. These are still the girls we know and loved from five years ago. Spencer gives a logical and matter of fact explanation of why Charlotte no longer poses a threat, Hanna talks about forgiveness,  Emily talks about bravery and honor and Aria basically just loses her shit.  Like completely loses her shit. She starts having flashbacks to the Dollhouse during her testimony and basically tells the judge that “bitch needs to stay locked up.”  And then Mona comes in to give her testimony coming to Char’s defense. The few months she spent in Radley really messed her up, she couldn’t imagine what it would be like to be there for years.She asks the judge to just let Charlotte go home to her family. 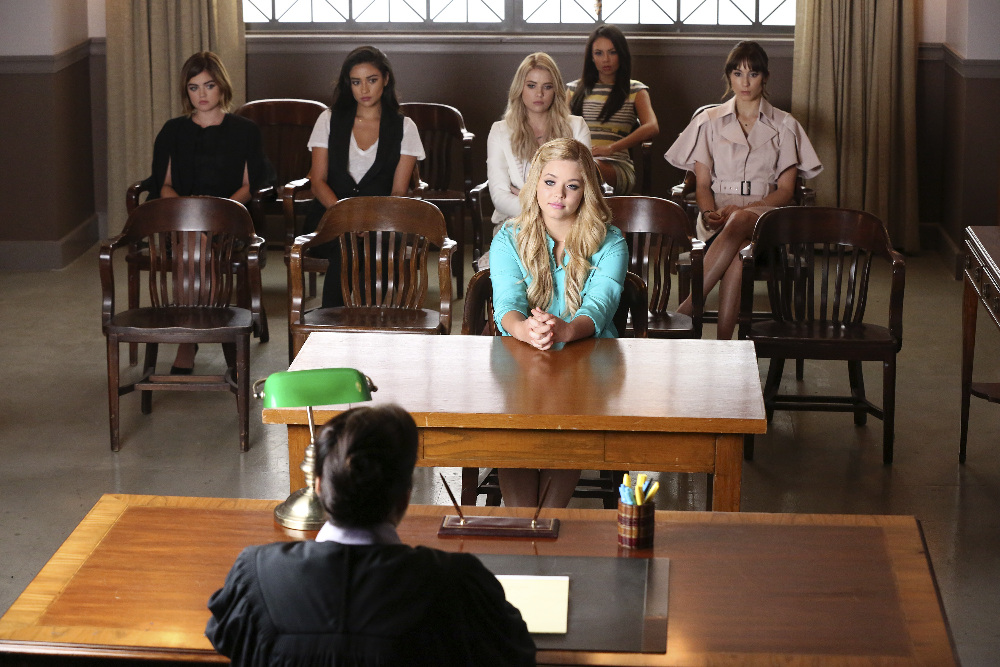 After the trauma of testifying in court, the girls head to Radley Sanitarium to get their drank on, the exact same place that created A. Em asks Spencer if she is okay drinking here, since she used to be locked up at Radley and all, but Spence says she is fine. Just then girls get a group text from Ali saying that Char has been let out. Hanna makes everyone turn off their phones so the Coven of the Sacred cocktails can commence. And commence it does, and Spencer is drunk, and it is wonderful. Here are some of the best Drunk Spencer Quotes:

“You guys are seriously lacking in any good taste. That’s why I love you so much! I love each one of you.”

At last call, Hanna picks up the tab and invites the girls up to her mini bar suite because her mom RUNS THIS BITCH. As they are leaving Spencer reveals that she never thought Charlotte  would get let out that they could lie for Ali one more time and it wouldn’t matter. And then they have a last toast to Charlotte, trying to put the past behind them.

Wake up in the Morning Looking Like P. Diddy

It is the morning after, and it is so nice to see that Spencer and Aria have assumed their normal sleeping positions together on the couch. And damn, Spencer looks hot hung over.  The girls get an early morning wakeup call from Ali who is freaking out because Charlotte is missing. Well this is extremely alarming. Also alarming, as Emily gets out of bed she a bunch of syringes spill out of her bag. Luckily no one else notices. What are you up to Emily?!?!

Well you may have guessed it, but Charlotte is dead. And at the scene of the crime we get to see Toby…. in his uniform. Seriously, I don’t think I will ever get used to Toby in his uniform as a cop. I still laugh out loud every time I see it. 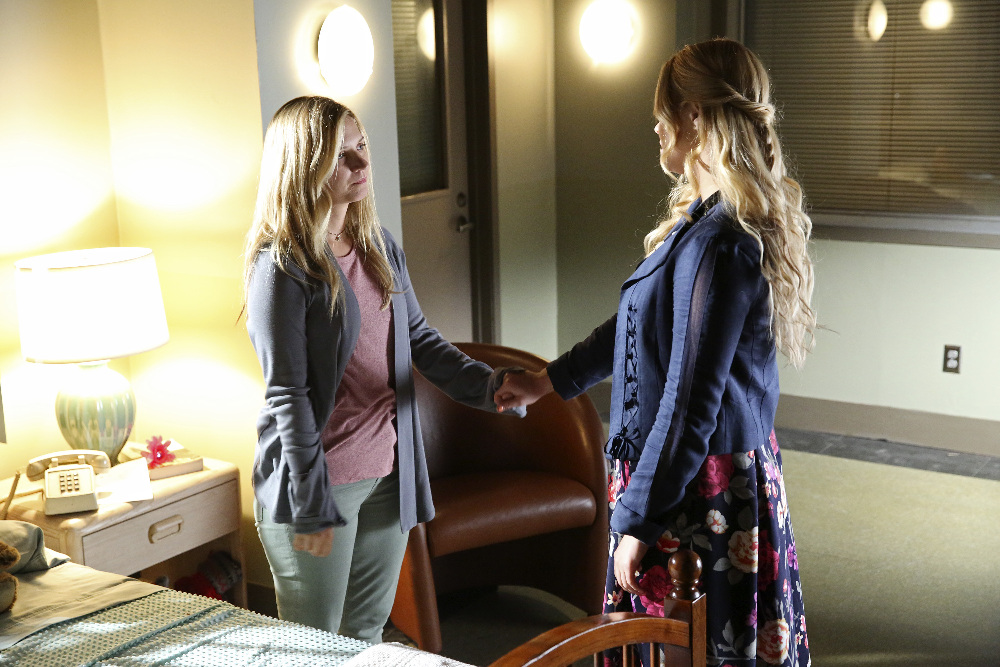 Caleb stops by Hanna’s suite to make sure she is okay.I may be a lesbian, but seeing Caleb always makes me swoon. Guess how Caleb knew to visit Hanna… Spencer called him. Guess who Caleb may be working with… Spencer. Guess where Caleb is staying while he is in Rosewood… the vents of Rosewood High Spencer’s Barn. I may be a minority here, but I totally hope they are boning. I mean it has been five years and I always thought that Spencer and Caleb would be great together. I mean, anyone would be better than Toby. But he did come to make sure

Another day, another funeral. Welcome to Rosewood. Just as the service is about to start, Sara Harvey’s stupid face covered by a vail walks into the church looking like morphed Jenna robot. I am just praying she doesn’t talk. I can’t handle hearing her voice again.  Lorenzo approaches the Liars to tell them that they Charlotte’s death has been deemed a murder, and that they will need to stay in town for the next couple of days. And the adventure begins!

Hanna Quote of the Week:

Emily Vest Count: 1 (This season I will be tracking how many times Emily wears a vest)

Previous article
‘Mighty No. 9’ Delayed For a Third Time
Next article
Creator of ‘Her Story’ Teases New Game