’12 Monkeys’ Review: The One That Got Away 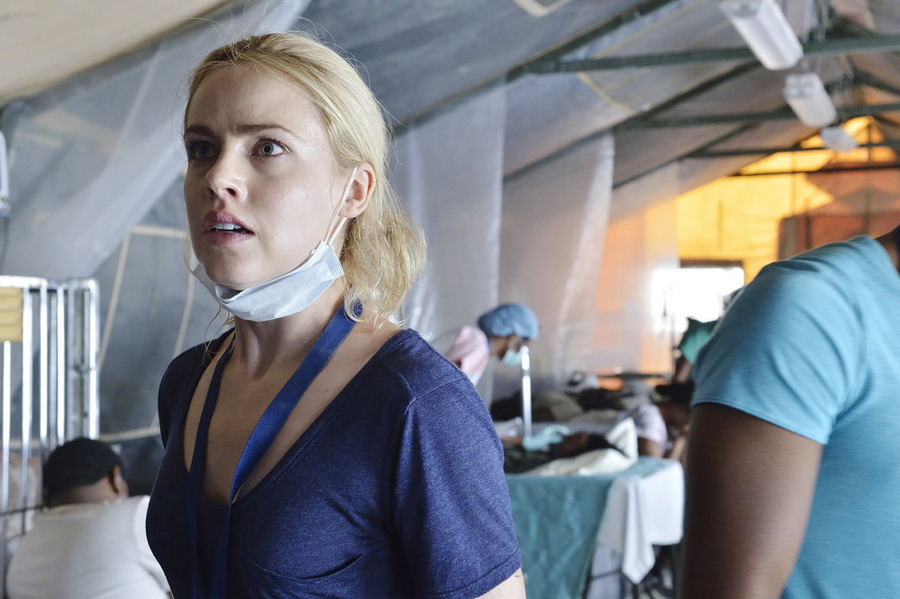 The plot thickens in this week’s episode of Syfy’s “12 Monkeys” with our plucky duo continuing to dig deeper into the mystery virus and along the way we discover that everyone’s got secreeeeeets.

In the past timeline, Cassie and Cole get closer as he gives her a lesson in the proper way to shoot a gun. You just know this will likely lead to them confessing their love at some point in this series. Cassie is called in by the police to help identify Jennifer’s kidnapper and she sees a picture of the scientists Ms. Goines supposedly murdered. Behold one of them happens to be an ex-colleague from her days working with the CDC in Haiti. She ends up talking to her former supervisor about Dr. Henri Toussaint and finds out that the poor man was killed on a medical run she sent him on back in 2014. Guilty much?

Cole wants to go back to that year to talk to Henri, believing that the scientist knows where the elusive Night Room is, the lab where Markridge concocted the deadly virus. Cassie however is obviously distressed by the entire scenario and makes him promise to stay the hell away from her. Now what could she be possibly hiding?

Jumping to 2043, as the Splinter Project scientists debate on what year to send Cole back to, Ramse finds a knife belonging to their old scavenger group (the West 7) and the two know that trouble’s afoot. We also get to see a little bit more of life in the future by seeing the animosity filled interaction between Ramse and Whitley the soldier while they are on patrol. Things get interesting when someone suddenly jumps Whitley and Ramse ends up knocking him unconscious only to have a discussion with his former cohort Max, aka the knife owner.

Max claims that she’s left their old gang and that she’s come looking for Cole and him, wanting to hideout with them. Ramse doesn’t buy it though and tells her that he and Cole had split ways and that there was a town nearby where she could find shelter with another group of survivors. Max leaves for now but he knows that the scavengers can’t be far behind her.

Back in 2014, we meet a very different Cassie as she struggles with PTSD from her encounter with Cole the previous year. She pulls away from her political aide boyfriend Aaron and becomes a workaholic, trying to determine if the next outbreak is that one that dooms humanity. This obsessive need takes her to Haiti where she works with the CDC to treat the local population and determine what kind of outbreak they were facing. There she meets Henri and they take solace in each other’s company, each sensing that the other had gone through something difficult and traumatic.

The two doctors end up sleeping with each other and two things cross my mind. Firstly that she’s cheating on her boyfriend and secondly this must be what she doesn’t want Cole to find out since their little touchy-feely gun practice session early in the episode. Seeecreeeets! 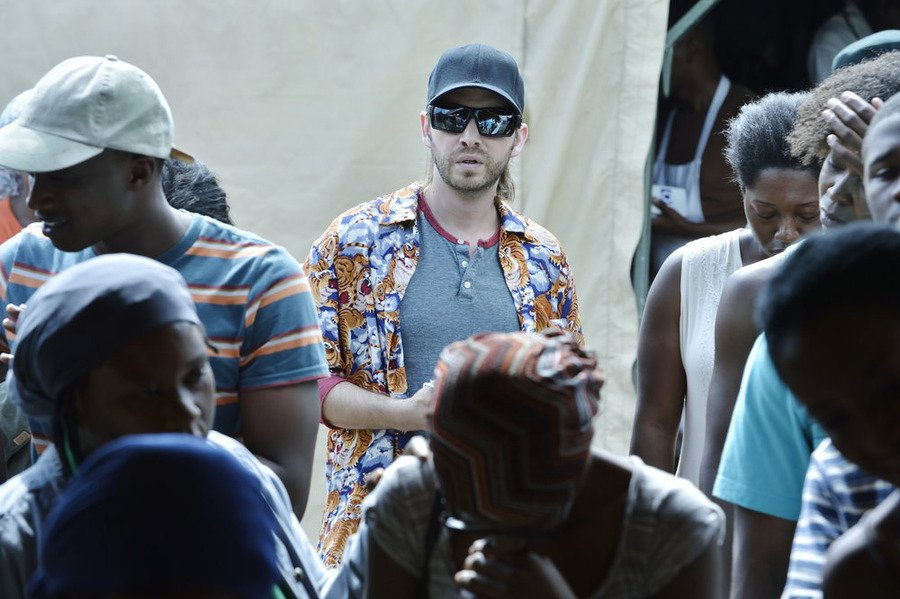 Meanwhile Cole finally gets sent back to 2014 and dons a ridiculous tiger print shirt, glasses, and a hat to try and get into the CDC tent to find Henri. When he finally gets the attention of the doctor, Cassie also spots him and he is forced to run away. But as luck would have it a local had stolen all the medicine available, forcing Henri to get some from another supplier. On his way there, Cole finds him and convinces him that he’s not a bad guy and Henri explains that he and the other scientists were working on viral gene therapy inside the Night Room.

Of course Pallid Man (according to his official Syfy bio) catches up with them with two thugs. As they battle, the older man’s strength surprises Cole as he is overpowered despite his own enhanced abilities. Pallid Man asks Cole who he is, since technically this PM’s first time to meet the time traveler. Cole responds, “You don’t know me, but you will.” If you watched the previous episodes this makes perfect sense because Cole originally meets Pallid Man in 2015. Now we also know that he is responsible for the PM’s distinct cheek scar.

After Cole wounds him, PM freaks out from potential viral infection and runs away. Henri then finally tells Cole that he doesn’t know where the Night Room is because they were always blindfolded and transported to its current location. However, he believes that if the manufacturer of the specialized equipment can be found, the mobile lab can be located.

Just as Henri fully trusts Cole, the guy kills him. You can see it as the time traveler giving the other man a quicker death when the alternative was eventually being caught by PM and the Army of the 12 Monkeys. Still, what the hell! 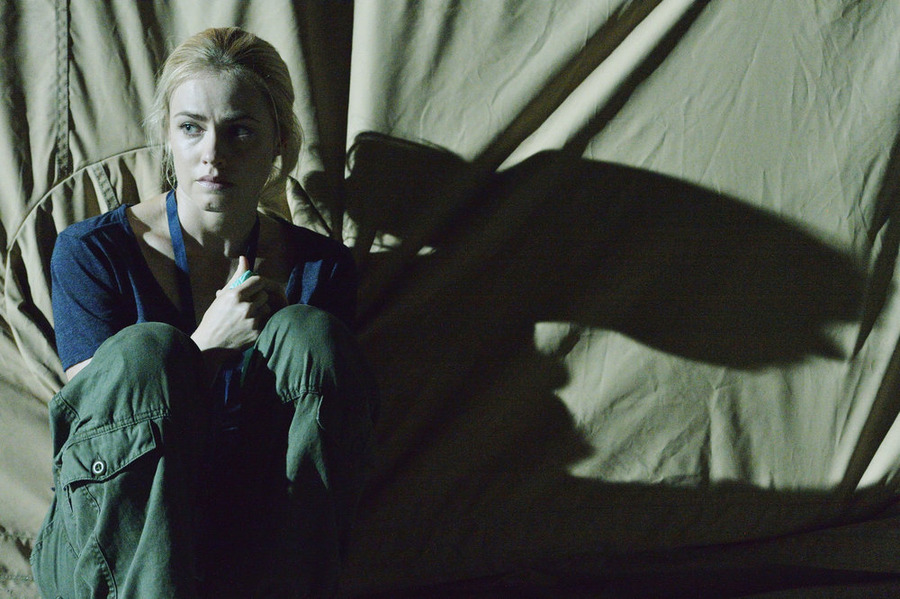 Cassie in the meantime is told that she’s not mentally stable and needs to go home. Cole sees her sobbing outside the tent before he splinters back to the future, leaving her feeling carzier. When twosome meet up again in 2015, Cole tells her that it had been him that night and lies about not knowing who killed Henri. SEEECREEETS!!!

The good Dr. Railly also decides that she will take the job her former CDC supervisor offered so she can track the specialized containment system that will lead them to the Night Room. Well, we know now how she ended up at the CDC building in the future.

I’m just not going to think too hard about whether or not Cassie would have ended up at the CDC regardless or whether Cole going back in time was necessary for her to eventually leave that voice message the Splinter Project finds in the future.

Next week we find out all about the West 7! And what’s with all the number oriented groups anyways?

@theworkprint
Follow
Previous article‘Game of Thrones’ Season 5 Trailer: Who Said Anything About Him?
Next article‘Project Almanac’ Review: It Could Have Been Worse