This week on Wynonna Earp: Wynonna plays host to the crazy goo demon, Lucado loses her mind, Waverly is a badass.

Oh, did you think last week’s episode of Wynonna Earp was bananas? You thought Waverly losing a hand (and regrowing it) and Dolls breathing fire was as crazy as the show would get? Emily Andras laughs at your idea of “crazy.” With Wynonna playing taxi to the good demon, crazy is just another Tuesday.

“Let’s Pretend We’re Strangers” starts off with Wynonna making a tied up Waverly a dead rat smoothie. You know, when I started watching Wynonna Earp, I thought the grossest things we’d see would be insane makeup for the Revenants. Boy, was I a sweet summer child. How in the world Melanie Scrofano managed to act through that scene is beyond me but someone go steal her an Emmy. Stat.

Doc interrupts all the torture, thank god, because I don’t think my heart could handle Wynonna actually hurting Waverly. There are some lines you just don’t cross and hurting beloved sister relationships is one of them. Wynonna actors have chemistry out the wazoo, but there’s something special between Melanie and Dom and I can’t bear to see them hurt one another. Which means that Emily Andras is going to tease the shit out of having one Earp sister kill the other for the next 8 seasons because she’s a showrunners who gets her jollies off by making viewers squirm. 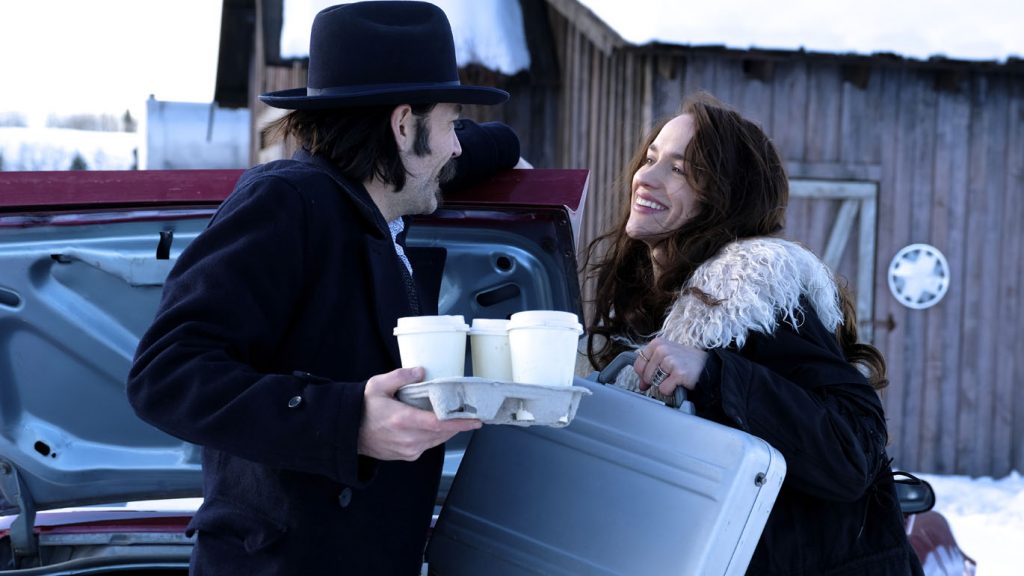 Wynonna has a love affair with a box of donuts and that’s like 10% demon and 90% Wynonna. Honestly, if you’re looking for a ship that will never sink, try Wynonna and donuts. Or Wynonna and alcohol. Wynonna and anything she consumes, really. The Purgatory Black Badge Division examines the creepy collector’s plate, some more close than others, JEREMY, and they decide to check out the fire house because it has the same emblem as grandma’s cookie platter.

If you need proof that Waverly is the Earpiest Earp to ever Earp, watch how “well” Wynonna fights off the demon controlling her. In that I mean, she doesn’t. Waverly had bouts of eating lipstick (still the grossest thing to happen on the show), chopping off demon heads, and hoarding silver like a Depression-era factory worker, but for the most part, she was still able to maintain Waverly long enough for no one to be suspicious. Seven weeks Wavycakes was possessed and no one knew because she’s THAT strong. Wynonna was possessed for 30 seconds before Doc’s bullshit meter started ringing alarms. I’m just saying, maybe if the demon goo wanted to preserve itself, it should have tried a little harder at keeping a low profile.

Interlude: imagine a demon possessing Wynonna who tries too hard to overcorrect Wynonna’s impulses and instead she sits for 4 hours cross-legged in a flower shop staring at the lilies. Or maybe she helps someone carry their groceries to their car. Or maybe she’s nice to Jeremy.

The firefighters, who also happen to be demon hunters working with Juan Carlo, spot Wynonna’s possession in about two seconds and Doc, able to read a room more clearly than anyone else, hurries her steak-knife-wielding ass outta there. And then he promptly locks her in the trunk of his car because Mama Doc ain’t raise no fool.

As the Purgatory BBD argues over how best to save Wynonna, Lucado is all, “Well, what’s done is done. Shame for the loss. She never liked me anyway. Guess I’ll have to Old Yeller that Earp once and for real. Real shame. Gonna miss her eating all my donuts.” Dolls, of course, has other plans which involve getting demon body parts to expel the goo beast from Wynonna’s body. He takes her finger, Lucado talks shit about said finger, and then suddenly her head explodes because she couldn’t control the demon inside her.

A moment of silence for the shoulder pads

The loss of Lucado actually came as a huge shock to me. I know that no one is safe on a show like Wynonna Earp, but I kind of enjoyed her rigid shoulder pads and the frosted look every time she entered a room. Lucado brought a nice anti-hero touch to the show, much like Bobo last season. She wasn’t all bad, just bitchy and flawed. I liked that about her.

After Lucado loses her head, Waverly comes in and points out the flaw in Dolls’ plan to drug up the demon: who is going to kill it once it leaves Wynonna? Dolls and Doc shrug and say, “I’m sure we could get a few revolver rounds into it” and Wavycakes just isn’t buying their ability to improv like Wynonna. Waverly gives herself back to the demon and then giggles her way back to the Homestead where she meets a distraught Nicole. Honestly, Waverly, she left three messages and you didn’t call back? You’re going to ruin our chances of watching girls kiss every week with that horrible gaytiquette.

The team meets up outside of the barn, but not before the Cult of the Plague Doctors stops them. Wynonna crushes on the leader’s broken and broody nature for a moment but Doc handles the situation by giving them Grandma’s Illuminati plate. They step aside and let Wynonna do her Peacemaker thing.

Nicole and Wynonna have a standoff and it’s one that’s been a long time coming for these two. Even without the demon possessing Wy, she’s been kind of a jerk to Nicole. On top of that, Nicole has been left out of every major event since the Ghost River Triangle vomited everywhere and she’s feeling a wee bit upset at the lack of her inclusion. In Nicole’s mind, if she can do this one thing, if she can protect Waverly, she still has a purpose. Of course, then Waverly tells Nicole to shoot Wynonna and Nicole is all, “now hold the fuck up. I was gonna shoot her, but my angel cupcake would never say such a thing.” Wynonna tackles Waverly, forces her to drink the grape juice, and then snaps her bra because they’re still sisters who just want to irritate the other. We bid adieu to the demon with the weird silver fetish and then Wayhaught kisses and makes up and all is right with the world.

Two big bombs in the final moments of the episode: the first one is that the Black Badge Division is completely empty. Does this have to do with the Finger Pointer Sisters destroying their cells and escaping into Purgatory or is there something more evil at play?

The second one, and the bigger of the two: Wynonna is pregnant. PREEEEEEEEEEGNANT. Honestly, it has to be Doc’s kid, right? How’s he going to take that news? Is this actually a child or another demon? (HEY YOU NEVER KNOW.) It’s a shocking turn of events and I’m eager to see how it plays out for Wynonna, especially since she’s about as motherly as a wood chipper.

Doc really is the unsung hero of Wynonna Earp. Without him, they wouldn’t have Dolls back and they wouldn’t have cornered the demon as well as they did. He gets written off as stupid because he was trapped in a well for most of history, but he’s not dumb. He gets people. He sees beyond the facades they put up and I LOVE that about him.

Looks like Wynonna’s pregnancy is going to bring that Doc/Dolls/Wy love triangle back into the mix. With Dolls safe and home, Wynonna had the chance to be with him fully, but now, if she’s pregnant with Doc’s kid, that throws a wrench into the gestation period.