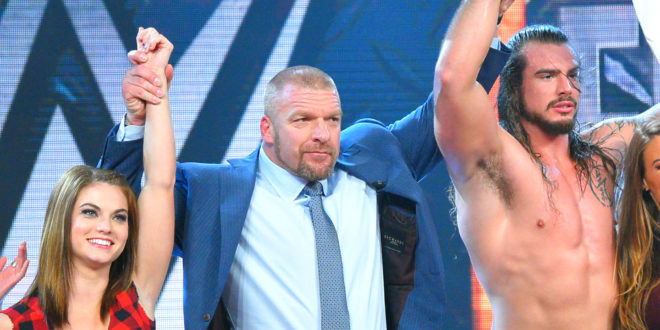 WWE Tough Enough down to the final four competitors as Amanda, Sara Lee, Josh and ZZ battle for a WWE contract! Last week, Tanner went home in a shocker…but anything can happen on this show. Josh had a sudden shift over ZZ and Sara’s seemingly took a hit on Tough Talk when Amanda accused her of being a WWE groupie. Who will be crowned tonight’s Tough Enough champions? Let’s find out…

We start with clips from “four months ago” when the competition started, showing everyone from past shows going home.

Arena
Jericho and Renee Young plug the big story of tonight’s Tough Enough: two of these competitors will get a WWE contract. Our competitors will each have a “match” tonight. We meet the judges

Barracks
Amanda says that she won’t let Sara beat her for the contract tonight. Sara’s excited to get into the ring. ZZ just uses swamp language: “I’m gonna be like a bullfrog going after a cricket”. Amanda rolls her eyes. Josh says that he’s picked up steam and now he’s getting votes. Suddenly, Amanda brings up Sara’s “groupie” thing. Sara shrugs her off. Amanda calls her a fraud. Sara says that Amanda doesn’t “play a bitch, she is one.”

Gym
Jericho is with Lita, Dogg and Booker. Jericho will work with each of the competitors so they can have great matches with color, music and design. Josh wants to be “The Yeti”. Jericho says that he should have what John Snow wears. Jericho: “If we’re gonna be the Yeti…let’s be the frickin’ Yeti.” ZZ wants to be “King of the Bayou” and wants a gator head on his head. Jericho laughs and says he told the Creative staff that ZZ’s “probably already got one of those” at home. Amanda wants to be “Mandy Rose” and wear black leather. and Sara wants to be “Hope” because that’s the town she comes from. She wants a flannel crop-top with a denim vest.

Jericho goes over their promos. Josh says that Yetis are crazy and lose their minds. Jericho says that ZZ should tell people that they’re gonna “get bit by the gator grip” and harp on the “haters”. Amanda just wants to shake her ass and look hot. Totally original Diva behavior. Sara wants to “come out to Kid Rock”. So, they play some lame rock ditty that isn’t impressing her. Jericho: “That’s the only thing she stopped smiling about. ZZ’s music is horrible. He wants some rock with some baby gators yelping.

Barracks
Dogg, Booker, and Lita suddenly show up and tell everyone to get into the living room. Cesaro will be the men’s opponent and Alicia Fox will be going against the women. Cesaro tells Josh that “he promised to bring the sauce…and now the sauce is here.” Cesaro also tells ZZ he’s in trouble. Fox says that the Divas have a sisterhood. Sara’s afraid of looking like a joke compared to her.

Arena
We are LIVE(!!!) from Full Sail University Arena!

Amanda is “Mandy Rose” and has no sex appeal whatsoever except giant boobs. She gets into the ring and says that this is reward as hell. This is the best experience of her life and an honor. That was Amanda — and introduces everyone to “Mandy Rose”. If she wins Tough Enough, everyone’s invited to the party — except for Miz. She says Miz is “The Moneymaker”. She has the “Money-Shaker”.

Alicia clocks Mandy who comes back with a Press, then chokes Fox against the mat. Alicia trips her on a rush, then hits a Sidewalk Slam for two. Alicia knees Mandy in the face, then tosses her head into the mat. Mandy comes back with a Hurricarana, then a sunset flip for two. Alicia knocks her down with a clothesline but misses an elbow drop. Side headlock and Bulldog by Mandy gets two. Fox kicks her in the gut and botches a Scissor Kick to win at 2:41.
WINNER: Alicia Fox
RATING: Not a bad showing for Mandy Rose but there’s no personality except tight clothing.

Post-match, Jericho says the girls beat the hell out of one another. Miz says that he loved when she called him out. Paige says that she looked like a Diva. Bryan said the match was sloppy but they brought it when they needed to.

Sara comes to the ring as “Hope”. She’s bouncy and goofy. She says she’s bringing everyone “hope”. She came out stronger and more determined each week. After this match, Alicia Fox becomes a footnote in her career.

MATCH #2: Alicia Fox vs. Hope
Hope gets shoved down. Hope comes back with a headlock and shoulderblock. Hope tells her to bring it and kicks her in the stomach. She runs at Fox who trips her and tosses her across the ring by her hair. Fox hits a snap suplex. Hope suddenly rolls her up for two, then botches the Cross Armbar badly, going after the wrong arm. It’s immediately broken. Fox punches her in the face — then botches the Scissor Kick AGAIN for fuck’s sake. Fox wins at 2:25.
WINNER: Alicia Fox
RATING: Sloppy as hell. Sara looks green as turtle shit. No personality whatsoever.

Post-match, Miz says her promo was “really good”. Paige says her entrance was dull but the match was good. Bryan says there wasn’t any energy in the entrance. Good promo though.

FEMALE WINNER…will be revealed at the end of the show.

The women don’t look happy at all.

ZZ comes out with the dumbest fucking gator costume ever. The head is a gator and the body is the skin of the gator with red cape lining inside. ZZ says he’s from the deepest, darkest parts of Louisiana. He beat gators easily. So he’s come here. All his baby gators put him here. He talks up the coaches and says that he’s here, answering every doubter’s question. Is Cesaro ready for the Gator Grip?

MATCH #3: The King of the Bayou vs. Cesaro
Cesaro hits a side headlock, but seems to fuck up the Irish Whip. Cesaro grabs him for a Gut Wrench, then hits an uppercut and a Swing, getting a few reps. ZZ comes back with an uppercut of his own and gets two. He hits a Flap Jack and goes for the Gator Grip, but Cesaro reverses with a Cross Face to win it at 1:51.
WINNER: Cesaro
RATING: Loved this match. Beautifully wrestled with the exception of the Irish Whip.

Bryan liked the match. Paige didn’t like the entrance. Miz says that he doesn’t think that ZZ has the work ethic.

Josh comes out in a fur cape and grey shorts. He says he’s been living a savage lifestyle. It’s all been for this. He’s been down and out a couple times — but the Yeti Nation kept him here. He wants the Yeti Nation to stand up and he’ll pay them back by beating Cesaro.

MATCH #4: Cesaro vs. The Yeti
Long lock-up and Yeti hits a Cesaro uppercut. Cesaro comes back with one of hisown, then hits a chest stomp. Cesaro goes for a Delayed Suplex but can’t get Josh up. Josh can’t get him up either, so it’s time for a Swing.  Josh regroups and tosses Cesaro into the corner for a splash. He goes for a Running Powerslam which Cesaro kicks out of. Cesaro comes back with a dropkick and Neutralizer to finish it at 2:32.
WINNER: Cesaro
RATING: Great match.

Voting is closed. Jericho brings out Triple H to award the winners with their contracts.

He’s stoked and ZZ smiles. Everyone congratulates the winners.

OVERALL: This was a fun show to watch. Most likely because it was nice to see the competitors mature.

Well…thanks for reading our recaps for this show. Hope you enjoyed them. We may see you back here next time if Tough Enough returns!

Matt Perri is one of those literary Ronin you’ve never heard of until he shows up and tells you he’s a literary Ronin. He’s a native Californian, a film buff, old school gamer geek, and a sports/entertainment fan. A lifelong Giants, 49ers and Sharks fan, he also covers the world of pro-wrestling, writing recaps for WWE Monday Night RAW and Total Divas at Scott’s Blog of Doom. You can follow the guy on Twitter via @PerriTheSmark as well as here at The Workprint and his own blog, Matt's Entertainment.
@PerriTheSmark
Previous ABC Family’s ‘Shadowhunters’ Coming to New York Comic-Con
Next Syfy Renews ‘Dark Matter’ and ‘Killjoys’

What We Do In the Shadows Episode 2.03 Recap – Tossed Salad and Scrambled Brains

What We Do In The Shadows episode 2.02 Recap – Vanity Mirror