Last week, GiGi was eliminated leaving Amanda the only unlikable character on the show.. This is the penultimate episode of Tough Enough…let’s see how it goes this week…

Arena
Renee Young and Chris Jericho are our hosts for Tough Enough. We have to push the final two MALE competitors for next week, so the women are safe this week. I don’t think WWE Creative thought this through. Paige says that the gentlemen need to put it on the line while Miz wonders which guy will “follow in his footsteps”.

Barracks
Amanda somehow believes she’s “planting doubt in Sara’s head” by telling her that “everyone loves her, so she should be guilty”. All Sara can do is stare as blankly as I am right now. 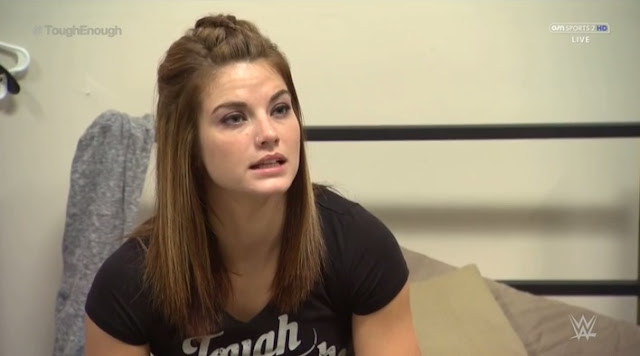 Sara says that Amanda was gonna go home if it wasn’t for Miz. Amanda still somehow thinks that’s been better than the amount of times she’s been in the bottom three.

Tanner’s tired of ZZ and how lazy he is. He says that ZZ loses every single challenge EVER. ZZ denies it and says he’s still here, “so don’t broke what ain’t fixed”. Oh, ZZ, you’re so stupid and don’t belong here.

Outside
Booker and Lita tell the recruits that they’re gonna work together to build the NXT ring for the next show at Full Sail Arena. Hope WWE’s insured. Road Dogg mocks ZZ, telling him that he’s only good at “laying down tape”. Ouch. Everyone builds and everyone’s great, so…YAY! Thumbs up!

Lita and Dogg says that wrestlers are characters so they’re all going to develop finishers that go with their characters. Sara comes into the ring and the judges verbally smoke her. Lita tells her that it’s time to bring it. She hasn’t thought of any finishing moves. Lita sets her up with the Cross Armbar. She gets it down after a dozen tries. Tanner gets in the ring and Lita’s not sure just how much progress Tanner can make in the “short time they have with him”, which doesn’t fare well. Tanner wants a Cross Body off the top rope but nobody can see his angry face. Booker wants tears. Tanner can’t do it. Dogg just tells him to yell really loud before he jumps and that’s actually pretty funny stuff. Lita: “You’re gonna be in the bottom three…all the dudes are.” Jesus…they can’t even make their threats sound threatening.

Booker warns Josh about being in the Bottom 3 as well. Josh wants a Powerbomb and calls it the “Abominable Powerbomb”. Dogg squashes all his creativity and gives him a running powerslam instead. Booker wants the corner splash set-up move to be insanely threatening. Josh is all in with it. Amanda wants something really flashy for her move. Lita loves her but Booker says that Sara has the WWE Universe behind her. Sarah has a Bulldog off the buckle. Dogg says that he can make a gator hunter insanely cool — but ZZ just thinks about it and doesn’t believe it. ZZ says that he has a move in his head called “The Gator Grip” which is really weak-looking Camel Clutch that can be easily broken if logic were applied. The set-up move is a Flap Jack falling face-slam.

Arena
The judges are impressed by everyone’s finishers. Paige especially likes ZZ — but trashes Sara. Again. Renee asks what Bryan would do if he was put in the Gator Grip. Bryan: “I’d probably die.” That gets some laughs.

Barracks
The recruits are all trying to figure out what to name their finishers. ZZ claims that he “is what this business is”. Nobody buys it. Everyone kinda mocks Tanner for his angry face.

ZZ retreats to the bedroom. He wants to make a speech to appeal to the WWE Universe. Amanda is suddenly genuine and says she hopes that people will see that she’s a Diva. ZZ tells her that he’s proud of her and she sees it.

Tanner and Josh get weird while cutting fat off of chicken, talking about breasts and thighs while giggling. Tanner’s aggravated that ZZ doesn’t do anything and gets twice the votes as everyone else. He doesn’t want to go back to “real life”.

Arena
Jericho wants the judges to quiz that recruits to see how quickly they think on their feet.

The boys are in the Bottom Three.

Chris Jericho asks Sara and Amanda who should go home. Both say Tanner.

Daniel Bryan doesn’t want to save anyone.

Interesting to note: Josh got the majority/plurality of votes this week over ZZ. Had Bryan saved Tanner, ZZ would have gone home. Tanner gets interested by Renee. Tanner says he pushed hard but it wasn’t enough. He picks Josh to win saying that he works hard and isn’t lazy.

OVERALL: This show has gotten better as we get less competitors. And that’s great.