WWE’s annual pay-per-view, “Tables, Ladders and Chairs” (AKA “WWE TLC”) came to us live from Boston, Massachusetts and boasted a card that I thought looked dull. The show itself? It was a typical WWE B-show, meaning that while it wasn’t flaming dogshit, it actually turned out to deliver a few solid moments.

Let’s take a look at what we saw: 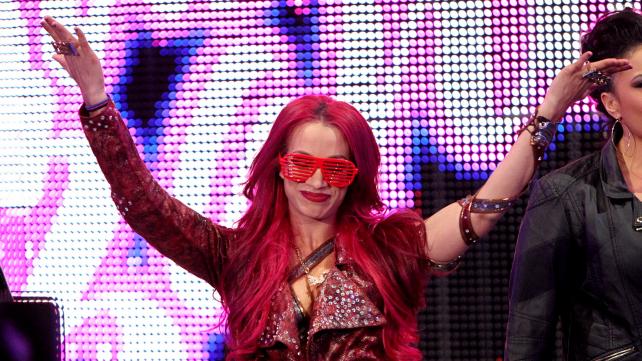 As is a somewhat disturbing trend for WWE lately, the pre-show matches have had a knack of topping each and every WWE PPV card in the last few months. While this match wasn’t great (and it honestly doesn’t need to be), it was better than the WWE Divas Championship match. NOTE TO WWE: the fans love Sasha Banks, so stop putting her in the background and put her in the title picture, will ya’? Thanks for that. While I wouldn’t go so far as to call Lynch a “failure”, this match does her no favors. With Nikki Bella out of the picture and Naomi and Tamina marginalized to the point of irrelevance, Becky should be standing front and center along with Banks and Charlotte — but she isn’t. The only downside to the match was the length and the shit finish that saw Naomi kicking Lynch in the face during the Dis-Armer so that Banks could get the win. Overall, a decent match. ** for me. 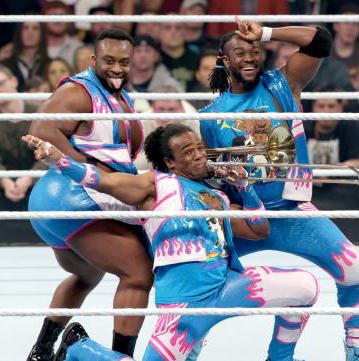 Let’s talk about The New Day, shall we? They’re an entertaining team. Their little pre-match performances are fun to watch even though they sometimes venture into “STOP TALKING AND JUST WRESTLE TERRITORY”. I just don’t like watching The New Day very much. They’re like your really outgoing friends at that one party who have a little too much to drink and they start dry humping the standing corner lamp…and you just kinda chuckle uncomfortably because you don’t want them to feel like they’re really fucking idiots even though your friends are wondering why you brought them around. Big E and Kofi haven’t changed at all since they’ve formed this stable. They’re the same people. They’re uninteresting mid-carders whose only saving grace is that they shout a lot of absurd bullshit that isn’t really funny before their matches. Then they cheat to win to cover for their weaknesses. This match is Exhibit A, folks. The Usos and Dragons’ workrate was top-notch as The New Day was barely around to do much “wrestling”. Sure, they did the usual Trombone Double Team in the Corner thing they usually do, but the Dragons and Usos were the ones earning their paychecks tonight. Sure, Woods had his cute “WWE 2K16 Stamina” pop culture reference but, for that, I’d like to direct you back to the bit about your drunken party friend. In any case, The New Day retains and it feels more like “has to” than “needs to”. I’m not even sure why it needs to be the former. I can understand Mr. Fuji’s cane and Jimmy Hart’s megaphone…but Woods and the light-as-air trombone just barely tapping Kalisto on the back and Kalisto selling it as though he’s been hit by cinder block?? Nope. Not buying it. The whole thing just felt forced. In any case, fun match. I give it ***. 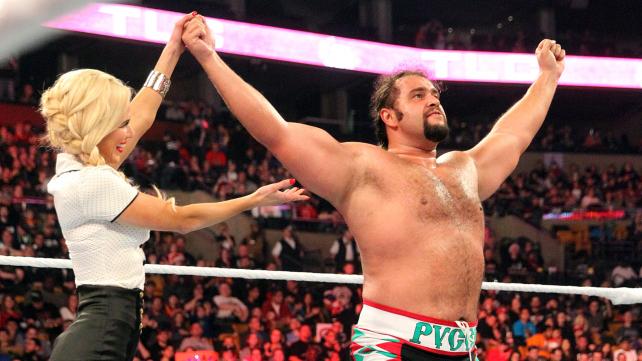 Holy shit, WWE still thinks we care about Lana and Rusev. The match is basically two meatheads kinda beating each other until Ryback doesn’t really injure her. Isn’t this thing supposed to be the Face’s Gimmick and not the cowardly heel? In any case, this was a huge DUD of a match. 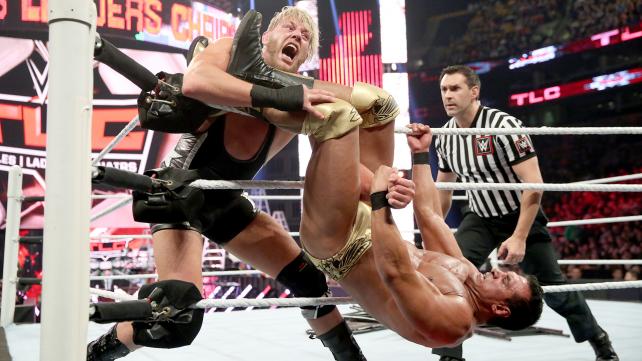 A match slightly more entertaining than the Rusev/Ryback thing — but not by much. The whole angle here was that Del Rio turned his back on Zeb Colter, so Swagger was aiming to avenge him because WE THE PEOPLE! Colter never shows his face and Del Rio beats Swagger up with a chair to retain the WWE’s tackiest title ever. *, if that. 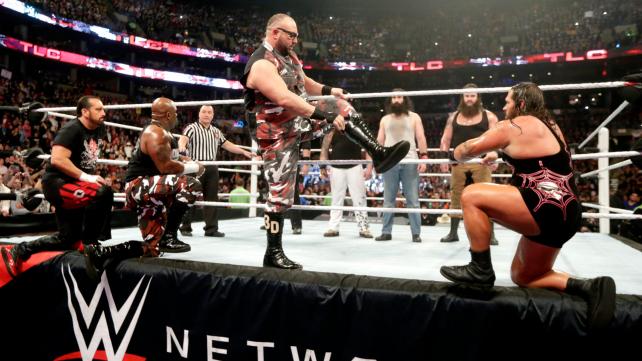 Oh, hey look: a bunch of has-beens vs. The Youngsters. This match had potential. To illustrate: we got our chair shots, trash cans and Kendo sticks; that’s all well and good…but don’t set up for a Gore Through The Table spot only to see Rhyno fly into Bray Wyatt putting him through a table. Don’t have Bubba Ray douse a table with lighter fluid — only to have Harper kick Bubba in the face and have Strowman end him. Don’t have Strowman actually go through a table — only to have your announce team declare that he’s not eliminated because it was “really only his foot”. In fact, don’t even eliminate any of The Wyatt Family if you’re gonna have it end with three of the Wyatts surviving. This whole match was like watching a sequel to a film that came 30 years too late and the writers saw maybe ten minutes of the first film and decided to start writing. I mean, you had Tommy Dreamer using a cheese grater hitting Strowman with a Low Blow here. This was about 15 minutes or so of “cute” ending with the Wyatts standing tall. I sincerely hope this ends here and sees the Wyatts going for the Tag Titles. That’s long overdue. ** for this one. 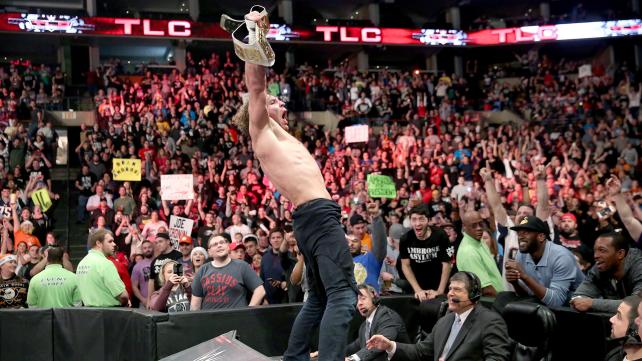 Finally, something I could get behind. This was a match featuring two of WWE’s best workers, a lovable psycho a’la Rowdy Roddy Piper and a dude who, despite his appearance, is seasoned and knows his way around a ring. I love two guys who play off of each other well and who give a great match. The pop when Ambrose wins the title is joy and something WWE needs to take note of. This sort of thing makes your fans happy. Kevin Owens has been a decent champ but Ambrose is the antithesis of Owens: he’s fun. Also, this was one of those cases where the veteran should always beat the n00b. Ambrose is just a badass who wins at any cost. He even Roddy Piper’ed the win: a roll-up off a reversal. My only real gripe about this match? The length was about something you’d see on RAW or Smackdown: all of ten minutes. Really? Look, WWE, if you’re gonna make a memorable match, have it go longer with more back and forth between the two combatants. Despite its faults, however, Ambrose’s reaction to his win felt genuine. His win was the best part of a card where, if you think about it, the heels took precedence. Overall: ***1/4 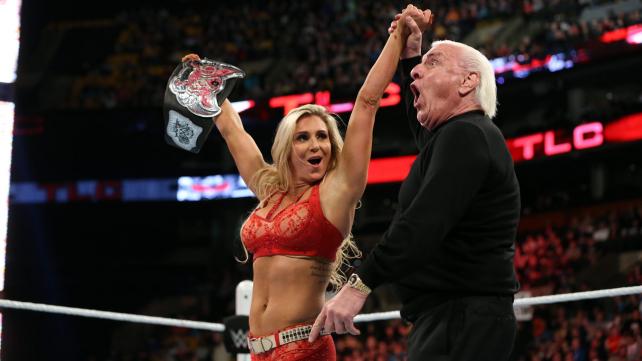 Let’s not pretend that Charlotte got here without the help of her Dad, m’kay? She did. But she also got by because she’s pretty talented. She won the Divas Championship, beating Nikki in fairly unconvincing fashion. Then she retained the title against Nikki again, beating her in…well, unconvincing fashion. So, now, Creative has got Ric Flair defending his daughter. No. Just no. First, screw this alleged “#DivasRevolution”, ok? It’s dead and gone. It was dead around the second or third week when we all realized there was no direction for the Divas and that they were just wrestling matches because that’s what they were supposed to be doing. Charlotte grabbing the title was the right thing to do — but it was forced. It’s that same force, in fact, that has brought Ric Flair back into the mix, defending his daughter and helping her cheat. The whole point of the “Divas Revolution” was, I assume, some sort of Feminist statement that women are fighters and didn’t need the boys. So, why the holy hell is Ric Flair around helping his daughter out when Charlotte didn’t need his help in the first place? Charlotte wins this match because of her Dad. Even the cheap “bare turnbuckle” finish is because of Ric. It derails everything. I don’t even want Paige to be the champ, but this is bullshit. Ric was never needed except for moral support and here we are wasting time, pretending Ric is needed. In any case, ** here. 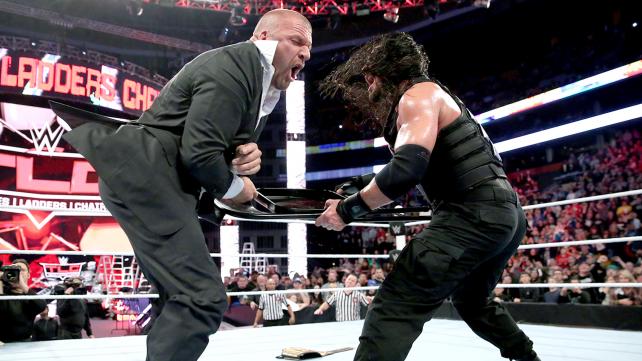 I’ve resigned myself to the fact that Roman Reigns will probably never be champion. He’s The Rock, Stone Cold Steve Austin and Dean Ambrose — without the appeal, the edge or the fun. This year’s main event saw Reigns and Sheamus in a match that should have ended with Sheamus losing to Reigns. But we’re in that weird Twilight Zone where Sheamus is champion only because WWE has zero idea what the fuck to do with John Cena out of the picture and, for some reason, they don’t want to fork the title over to Roman Reigns despite the fact that Sheamus is an even less desirable champion than Cena or anyone else in the company. So, the match ends with Sheamus winning because of Del Rio and Rusev saving his ass. Does this epic, manly soap opera end there? Nope. It ends with Roman losing his collective shit and beating Sheamus to a pulp with a chair. Triple H shows up and he gets the same treatment Reigns gave Sheamus for his troubles (while Steph, disturbingly, shrieks on the sidelines for her husband and doesn’t do anything about it) and we’re off to the goddamn races, setting up a nice RAW for Monday night where everyone who opposes Triple H is a mutant and must travel back in time to stop his Sentinel program from stopping Stone Cold from winning the title back in the late 90’s. Neat match but it gets a **3/4.

OVERALL: I have to say, I enjoyed this TLC PPV a lot better than the last few. This one was fun to watch and wasn’t a total waste of time like the Survivor Series. I know that this is wishing too much, but I’m hoping that Santa can deliver us a nice Royal Ruble and a fun Road to WrestleMania.

@theworkprint
Follow
Previous articleIt’s the End of the World as We Know It In ‘X-Men: Apocalypse’ Trailer
Next article‘The Expanse’ and ‘Childhood’s End’ Usher in the Golden Age of Sci-Fi