Why We Love ‘Parks and Recreation’: A Goodbye Story

Like many people, I didn’t watch Parks and Recreation when it first aired. I curse myself on a regular basis for never finding shows until it’s almost too late, but thank goodness NBC had the foresight to keep Parks and Rec going, even after an abysmal first season. NBC, even through low ratings, then gave us seven wonderful seasons and I am incredibly grateful because we all need shows like Parks and Rec in our lives.

I found Parks and Rec during a low point in my life. It’s sound like a cliche, and maybe it is, but I don’t care. I’m not sure what compelled me to watch through the show other than Amy Poehler’s friendship with Tina Fey. But watch I did and slowly, that icy exterior around my heart warmed up to the Pawnee’s Parks Department. Parks became a ray of sunshine against a storm of dark and gritty TV shows and I don’t give a shit if you think I’m being cheesy because it’s the truth.

I don’t mean this in that Parks is somehow superior to these other shows–because hey, there’s some great entertainment out there–but rather that Parks never relied on the “usuals” to get viewers emotionally hooked. There aren’t dramatic rifts between characters that last a season or more. (Ron and Leslie’s fight this season was the closest they got.) There aren’t any intense villains for Leslie to face, other than that devious monster, Change. There aren’t emotional deaths or overly drawn out tear jerking scenes to show us how “resilient” these characters are in the face of adversity. They just were.

Lacking the drama of most sitcoms is part of what made Parks beautiful. Flaws were accepted, eccentric behavior embraced. Whether or not you can relate to the wacky antics, watching Parks just makes a person happy. The stories are positive and supportive, steered by Leslie’s need to do good in the world. There aren’t many shows on TV with that sense of generosity guiding their stories. Jane the Virgin is the only one in my mind that even comes close. I don’t mean all this to say that shows shouldn’t have some darkness to them, but that for all the Game of Thrones and Homelands and Gothams, sometimes we need a cleansing show like Parks and Rec to remind us of the good in the world.

Watching the finale, “One Last Ride,” was bittersweet, knowing that these characters each received the best the world had to offer and at the same time, knowing their stories had come to an end. Parks made no effort about hiding the fact that this was a goodbye episode. No over-the-top last minute declarations of love or insane races to finish the intense plot, it was simply a continuation of the relationships that had already been established. And that’s the best part. Parks never tried to be something it wasn’t. Of course it wanted to take the high ground and teach us lessons about life and make us happy. That’s what Leslie Knope is all about. Sickening and stubborn though she may be at times, Leslie looks for the good in others, for any way to help someone and make their day even just a little brighter.

And that’s why I clung to Parks so desperately. In my darkness, there was this show, this show that boasted a wide array of characters who never pretended to be anything but what they were, and this show held my hand. It didn’t make some grand gesture, forcing this existential epiphany on me to make me a better person and blah blah blah, but it was just there when I needed it for a smile or a good happy cry. It was there to remind me why we fall in love, have friendships, and chase our dreams. So often while watching movies or TV shows, I looked to protagonists as people with traits I wanted to embody–heroic, charismatic, independent, witty–even though in my depression, I didn’t believe I could be any of those things. As ridiculous as it sounds, with Parks and Rec, I didn’t want to BE any of the characters. Their lives were so real and honest, I realized I didn’t have to be Leslie or a Donna or a Ron to make someone love me. I could just be me. Though it may be fictional, Pawnee felt like a place where I could be myself. And I needed that support, that bright light, that hope that things can be okay.

I’ll miss you, Pawnee, and all of your crazy residents. 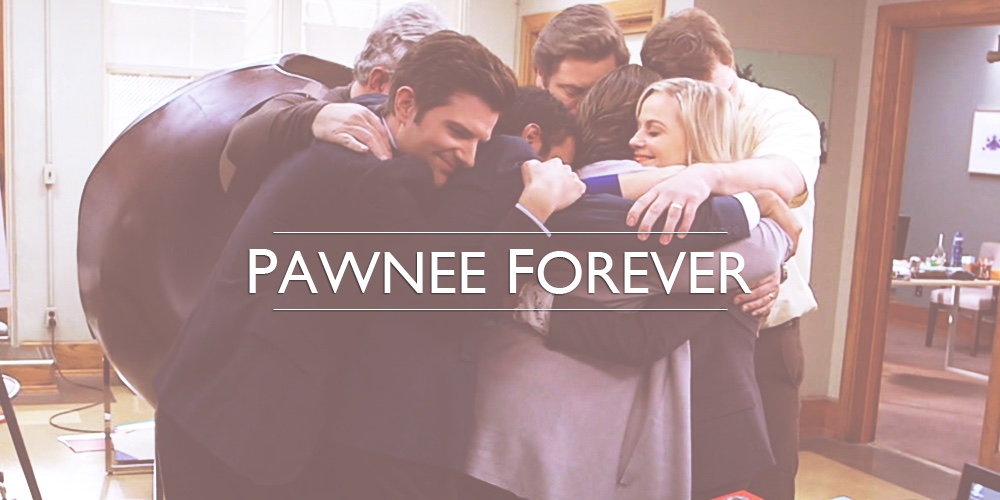