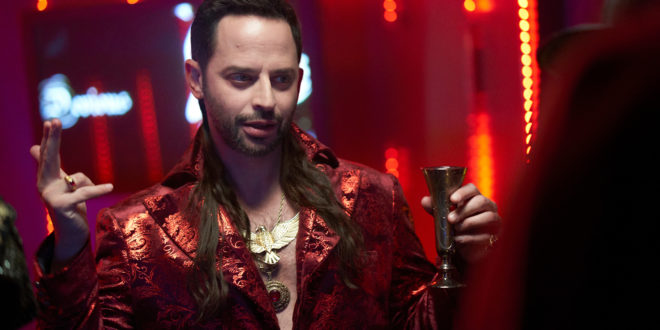 Simon the Devious (Nick Kroll) toasting to what will inevitably be... his toasting. What We Do In The Shadows (FX)

‘What We Do In The Shadows’ Review: Episode 4- Burned. Notice?

Webster defines dominion as sovereignty and ownership. Both are powerful terms. I define “Dominion” as a Sisters of Mercy banger- it’s a powerful song. For our quartet of cadavers sanguine, dominion is a tract of real estate that extends two streets and five houses.  This immediately presents a problem, as the cadre putting up the most venerable vampire, The Baron (Doug Jones), were already called to the principal’s office once. They need to make moves and they need to make them now, even if a wearable witch’s asshole is on the line (more about that later) in What We Do In The Shadows (FX).

Diving head-first into the fourth episode, we Cold Open with LARPER Jenna (Beanie Feldstein) who Nadja’s snack/friend from episode 1.02. Found nearly rigored by her roommate and about to ferried away by the first responders, she comes to in mid-daylight and books it, confused and followed by a burgeoning dark cloud. I’m personally glad that Jenna was not simply abandoned by the writers as something they might revisit. I think her resurrection (just in time for Easter!) is an entre into the bigger picture and sets the stage for the rest of the episode.

Meanwhile, back at the house, Guillermo is still loving his life as Nandor’s familiar. He wants to put the past in the past and is trying to get past Nandor’s cocktease of turning him into a hemovore, but you can sense there’s still a droplet of resentment residing, which I can’t help but feel a little bad for. However, as we all know in life, it’s the thirstiest that don’t get drunk.. Oh, it’s just me? Moving on…

Laszlo’s surveyed the territory they have command over and it only spans a matter of blocks, they all decide to form an alliance in New York, proper. I’m sorry Staten Island, but not even your residents like you. You’re basically the Sacramento of the East. Just sayin’.

In order to accomplish this (eventual) dominance, Nadja and her beloved set their sights on Simon the Devious (Nick Kroll), a King of the Manhattan vamps. They’ve experience with the bloke on their voyage to the New World, that latter a bit more than the former. Having risen through the ranks, Simon is a lord of the night-life… Literally. Owning busiest club, the Sassy Cat, in the busiest borough of the busiest city in the world, he’s without question their best shot to ratchet things up. All three adorn their best raiments… save for ironically the dandiest. Laszlo dons a sentient hat which nearly looks like the Sorting Hat in Harry Potters (only made of Witch Flesh) because he knows it would get under Simon’s skin.

Sometimes we make bad sartorial choices in life. I’ve mismatched socks before. I’ve worn clashing colors. This wasn’t one of those choices. Outside of looking like something nearly out of Final Fantasy, Nadja hates the damn thing. It’s not the best well read hat but it can bleed.. which I think is kind of cool, but it’s cursed. Since when did something that isn’t supposed to bleed bleeds? The hat takes the life of Laszlo’s familiar before we trek out and also takes the life out of his style. It’s just a horrible thing.

Continuing on its mission, the hat happens to snare Laszlo and Nadja in traffic and more entertainingly, ensnare actual Laszlo in a Cab door. This door was kind of done before with Hitch and I’m sure other things, but this works because it goes a little further. If Hitch’s joke was funny, this was funnier.

Now into the club, Laszlo is put off by what he used to remember the club as. Always the pooper on the birthday cake, the Remora to their shark, Colin joins in. In here, we can consider Nandor’s title ‘the Dickish’ because he wants to find a friend, but he already has a familiar that he seemingly tosses off to the side, possibly giving him breadcrumbs of joy. Nandor had finally found possibly an actual hookup but Colin cock-blocks him I’m sure because he just lost his girl in the latter episode. That vampire is now more dangerous than ya think. Much as I like Colin, I am more on Nandor’s, though he’s still being cold as the blood runs through his veins to Guillermo. Guillermo decides to possibly get a little bit of space and ‘go to the bathroom’. This is where things take flight.

While searching for the bathroom, he happens upon a Sex Room and finally, the familiar room. What can only be described as a warehouse breakroom, we meet a few of his familiars, including Colby, a familiar to a pair of 400 year old vamps that take the form of children. When hearing the info Colby’s been dispensing on how familiars now work (an implied unionization), Guillermo goes back onto the floor. He is propositioned with a thirsty vampire down to clown.. until Nandor flaccidly intercedes and through a meek protesting against his familiar going to the Dark Side. Unimpressed but impassioned, Guillermo storms out and is ready to quit this way of life, leaving Nandor at an impasse because he’s been summoned along with Laszlo.

After making Lazslo feel awkward with the carnal history of his now betrothed, Simon introduces his crew.. and oh, does he roll deep. We are treated to the best roll call ever presented in a half hour show- Big Vlad, Abadon, Empusa, the Freak Sisters (not related), Little Vlad (the guy’s a fucking maniac),  Mr. Fifties, contortionist “S”, Evil Steve, Freakfest Tony, Blag Vlad the Exsanguinator, The Silent One, Asian Mike, Chunt, Jane the Soulless, Egrad the Filth, Horvac the Pit Master, Gonthrapple and his brother Krellsac, Wesley Pyschs, Desdemonda the Shrieker, Len (the accountant) and Count Rapula, whom is a 300 year old fang holder that’s been spitting only for the last 28 years.

As Simon has a small swath of their borough over a barrel, only the most agreeable would be on the table for negotiation- which Simon gutted Laszlo by asking him to give over his beloved head-piece- the horrific hat. Though reticent at first,  he relinquishes the hat to it’s ‘rightful owner’ and what comes next could only be described as an (accidental?) act of violence when Simon is feeling this new sweet ass piece de resistance. Aim for the sky bro, aim for that sky.

We end on a bit of a poignant and conciliatory note when Nandor finds Guillermo, tries to make things right by performing a Superman/Lois Lane/Jack/Rose move. On brand, the Relentless slips up, drops down his friend and winds up during visitation hours in the ER. Guillermo is still down for the Count. As luck/fate/curse would have it, the next room over is Simon’s. Upon being reunited with his long lost love (let’s be honest, outside of being cursed, Nadja’s a little jelly), Laszlo realizes that death would befall Guillermo if he sports the only article of clothing in the world which has an active bleeding period. Screw it, he takes it anyway.

Thus ensues the takeaway from this episode which is that it rocked. Tom Scharpling, famed for his legendarily funny and still ongoing show, The Best Show used to be a writer on Monk (USA) and Divorce (HBO) in addition to writing for outliers like Tom Goes To The Mayor [adult swim]. This due knows what equates to funny and it’s front an center in this episode.

My whole takeaway from this spicy episode is: keep safe your own, don’t trust others, shoot for the stars, life is what you make it, keep your friends tight/enemies tighter (all those idiotic platitudes)… and maybe keep an eye out for Little Vlad (he’s a fucking maniac!).

Robert J. Kijowski is a screenwriter who enjoys a good chuckle and an even better weep when indulging in art both good and even better bad. He enjoys the company of strangers in a theatre but adores the camaraderie of friends watching Netflix. He also loves to talk- a lot. This can be read through his recaps and reviews on the Workprint or heard through his weekly movie podcast, After the Credits. His presence can be felt through Facebook, Spotify or Ouija. Don’t use the latter though- he almost always ghosts people.
@writer_wronged
Previous The Man Who Killed Don Quixote Movie Review
Next ‘The Twilight Zone’ review: ‘A Traveler’

On this episode, we recognize the power of the duo. Whether it's what you have or you can do, it's amazing and don't negate it. Don't. Ever.