What is Marvel’s Judgement Day?

In what’s being called one of their biggest comic events in recent memory, Marvel’s Judgement Day is an Avengers, X-Men, and Eternals crossover.

In Judgement Day, the X-Men have achieved immortality as the most dominant species on the planet. However, The Eternals have uncovered a long-hidden secret – a devastating truth about mutantkind. Meanwhile, The Avengers have come into direct conflict with the Celestials and are currently using a fallen Celestial as their base of operations, slowly unlocking its secrets.

When the Eternals attack the mutant nation of Krakoa, the Avengers try desperately to de-escalate a potentially apocalyptic war. All for a three-way battle the likes of which has never been seen; as Judgement comes for all. From the greatest power, the teams have ever witnessed in the Marvel universe.

Gillen had this to say in Marvel’s Press release:

“There’s a classic metaphor to describe the Marvel Universe – a toybox, which creators take toys out of, play with and put back. I get it, but it’s never quite how I’ve seen it – I think ‘play’ in another way. I think of a music shop, with all these instruments with their different qualities suggesting different songs, different stories. For all the Marvel instruments I’ve played, I’ve never written an event. Writing an event is something different. It’s not like playing an instrument. It’s having all the instruments in the Marvel music shop. That’s not like writing a song. That’s like writing a symphony.

I looked at everything in ETERNALS and IMMORTAL X-MEN and everything else all the X and Avengers writers have done and thought… yeah, this is an event. In fact, an event is the only way to do justice to this. The Beach Boys’ Brian Wilson described the music he was reaching for as Teenage Symphonies to God. I think that’s what the best Marvel Events aspire to be, and it’s what we’re aspiring to here. I want the scale. I want the heartbreak. I want a book that wears its heart on its sleeve even as it puts a fist in your face. I want something Wagnerian in its volume as emotional as God Only Knows.”

Adding onto what his partner was doing, Schiti added:

“It is great to have the opportunity to draw another Marvel event after Empyre. The difference is that last time I was just excited, but now I know how high the expectations are, so now I am both excited and a bit scared! Luckily for me, I have the great Kieron Gillen and Marte Gracia watching my back and together we can face any cosmic threat!”

For those following the story thus far, Gillen will be continuing his work in both ETERNALS and IMMORTAL X-MEN in this Judgement Day storyline. It will also, tie in together with the stories in Jason Aaron and Javier Garron’s AVENGERS run. All for a team-up of epic proportions meant to historically monument a moment in Marvel comics. 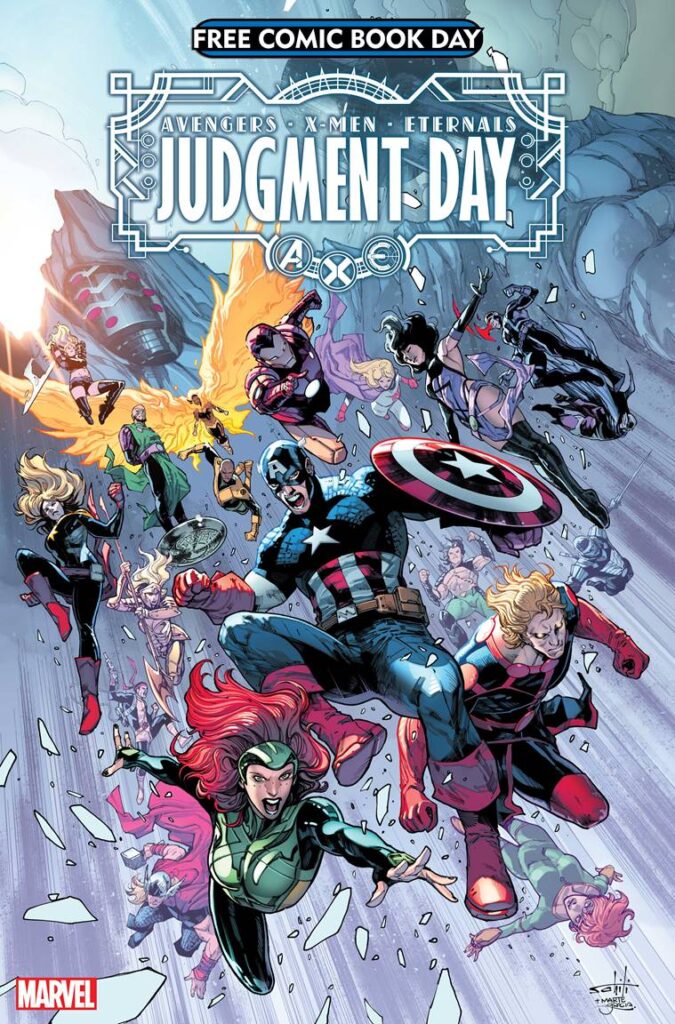 Atop of this, during free Comic Book Day on May 7th this year, fans will get their first glimpse at the JUDGEMENT DAY conflict in FREE COMIC BOOK DAY: AVENGERS/X-MEN. Featuring a prelude story by Gillen and artist Dustin Weaver.

It will also mark a new Marvel hero named Bloodline, in an introduction story written by Danny Lore and artist Karen Darboe.

FREE COMIC BOOK DAY: AVENGERS/X-MEN #1 will be available through Penguin Random House and Diamond Comics. Check with your local comic shop regarding availability.