‘Werewolf By Night’ Review: By Far Disney Plus’ Best Horror Series In 2022

If you are of a certain age, you will remember the Special Presentation intros that networks used to have. With a fanfare of trumpets and a swirling logo, you knew something cool was about to come on. Maybe even a holiday cartoon!

The first images of Werewolf by Night, the new special on Disney+, knowingly mimic this. It’s the first indication that we’re in good hands here.

Werewolf by Night is Marvel’s horror comic from the 70’s. It’s a cool name for a comic, but doesn’t make a lot of sense. After all, when else would someone turn into a werewolf? Their whole thing is changing under the full moon. It might be best known today for being the first appearance of Moon Knight as a werewolf hunter. (Get it? The Moon Knight hunts the werewolf?) Anyway, don’t worry if you’ve never read the comic. This special has very little to do with it except for sharing a name. The special is a fun and scary throwback, not just to the TV specials of yore but also to the Hammer Horror films of the fifties and sixties. Shot in black and white by first-time director Michael Giacchino (better known as the Oscar-winning composer of movies like Up), this looks amazing and I hope he can take the reins for more MCU fare in the future.

The world’s greatest monster hunters have arrived at Bloodstone Manor for the funeral of Ulysses Bloodstone, the world’s greatest monster hunter (I did not realize that was a competitive field. I would certainly watch that on ESPN2). Among them are Jack Russell (Gael Garcia Bernal) and Ulysses’ estranged daughter, Elsa (Laura Donnelly). At the funeral, Ulysses tells them – from beyond the grave… oooo – that they are actually here to take place in a hunt. There is a monster in the maze with the fabled Bloodstone attached to him. The bloodstone allows the owner to control all monsters and whoever finds it gets to keep it. It’s a no holds barred affair, so if a fellow hunter should get in your way, well, better watch out for your ax. 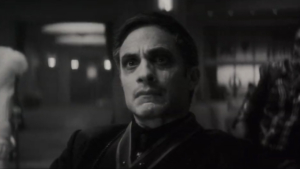 This is a great spin on a couple classic horror movie tropes – strangers brought together under odd circumstances, a location they’re trapped in, and of course a MacGuffin hunt. But there are twists and turns and not everyone is who they appear to be.

The cinematography and editing are great here. There is a distinct effort to pay homage to the style of old horror movies, especially the ones you’d watch on a Saturday afternoon creature feature. Lots of dramatic lighting and closeups! And considering how much flak Marvel has been getting for its CGI lately, there are some incredible practical effects here. This is the loosest and most fun Marvel project I’ve seen in a while. Lately, too much Marvel fare can feel like homework. (“If you don’t watch the new Doctor Strange movie and the Falcon TV show, you’ll fall behind on all the details in Phase Five! You don’t want to fall behind, do you?”) This is just people taking a weird concept and having fun with it. I hope this frees up the creatives at Marvel to do more unconventional one-off shows. Think of all the weird and wild stuff they could do, not having to worry about continuity or where it fits into the larger MCU? (Come on, like you wouldn’t watch a Halloween special featuring Hellcow, an actual vampire cow that appeared in Man-Thing and Howard the Duck comics? #HellcowSpecialNow)

At a brisk 54 minutes, this is a great addition to your Halloween viewing. Play it at your next costume party and pair it with some Vincent Price classics.

If you are of a certain age, you will remember the Special Presentation intros that networks used to have. With a fanfare of trumpets and a swirling logo, you knew something cool was about to come on. Maybe even a holiday cartoon! https://www.youtube.com/watch?v=4JrCB-m2oXk   The first images...'Werewolf By Night' Review: By Far Disney Plus' Best Horror Series In 2022