The newest movie to release straight to Disney+ (which does not speak to quality the way “straight to DVD” once did) is “Turning Red”. The story of a spunky 13-year-old girl who is forced to endure a bout of “magical puberty” thanks to her family’s ties to red pandas.

Meilin (voiced by Rosalie Chiang) is a Chinese Canadian girl who recently turned 13. She is uninhibited, shameless, and fantastically alive. Mei’s life is a delicate balance between who she is at school and around her friends—an in-charge individual not afraid to rock the boat—versus who she is at home – a dutiful straight-A daughter/assistant temple keeper. Mei thinks she’s slick, ditching her friends to fulfill her domestic duties, but they bemoan her obedience once she’s out of sight.

Things start to spiral, however, when Mei suddenly finds herself drawing the Daisy Mart clerk Devon (Addison Chandler), a guy she’s never been into until that very moment. Not gonna lie, I can totally relate to this. Who among us hasn’t insisted that so and so is “gross” publically, then, randomly out of completely nowhere, so and so doesn’t look too bad…is…kind of…ok…very hot. Now, the trajectory this revelation takes is pretty drastic—Mei goes from drawing innocent anime depictions of herself and Devon to drawing a full-on mermaid Devon complete with hat! Worse still, her mother comes across these drawings and completely freaks.

Many a teen fears embarrassment at the hands of their parents, but poor Meilin gets a genuinely mortifying moment care of her mother, Ming (Sandra Oh) confronting Devon with her daughter’s drawings. Why does Ming react in such an insane way? Because, like many parents who pray their child never grows up, Ming is in denial about her daughter’s steady march into adulthood.

Now, I’m going to take a moment to point out that turning 13 does not make anyone an adult. This old-school definition is more biological than anything else, seeing as how once puberty hits you reach “sexual” maturity. I.E.: you can breed. But, making babies doesn’t make you an adult. The threat, however, does make your parents super worried, which goes a long way to explaining Ming’s outburst at seeing her daughter’s budding sexual drive.

Following the destruction of her world, Mei is understandably upset. The weird thing is she’s upset with herself. Instead of yelling at her mother, Mei yells at herself. It makes sense, given her loyalty to her family, especially her mother. Hell, she tells us at the beginning of the movie that honoring your parents is goal #1! It isn’t great for her in the short run since that night she has a terrible dream and wakes up as a giant red panda.

Naturally, Meilin panics. Ming questions her daughter’s distraught scream from the bathroom and comes to the conclusion her period has arrived. Mei manages to escape to her room without being seen and even gets her panda vaguely under control. Strong emotions *POOF!* the panda into being, so all Mei needs to do is remain calm. She succeeds until Ming shows up at her school—with pads no less. Ouch. Two majorly embarrassing moments in under 24 hours, it’s no wonder Mei loses it and the classroom fills with pink smoke as the panda emerges. Luckily, Ming is peeping into the window and sees her daughter’s transformation. She pursues her daughter on a fun chase through the school and the neighborhood until it ends back at their house. Here, Ming reveals that turning into a giant red panda isn’t as strange as Mei thinks, at least not for their family. There’s a good reason their family temple has two panda statues in front—Mei’s ancestor, Sun Yee asked the gods for the power to turn into a red panda to protect her family when she was their only defense.

The information is a bit of a double edge blade. On one hand, there’s a cure, on the other hand, her normally vigilant mother now has a reason to be downright overbearing. However, this is the point where the movie takes an important turn. See, while the immediate knowledge leaves Mei devastated her friends eventually come a-knocking, with the news that their favorite boy band 4*TOWN is coming to Toronto, and discover her truth. They are, understandably, shocked by it but they don’t abandon her. Instead, they sing a song from the band (which, despite its name has 5 members) in a show of solidarity. This provides Mei the confidence she needs to truly rein in her panda. It’s enough of a boost that she’s able to prove to her parents she can contain the beast and is allowed to go back to school.

Now, each girl has asked their respective parents for permission to go to the concert, and each one was rejected. Well, Miriam (Ava Morse) got a yes with the caveat she has to buy her own ticket. 200$ is a lot for a jobless 13-year-old to scrounge up. But, the friends are determined to go to that concert, and with the help of Mei’s panda, they devise a perfect fundraising hustle. Their work brings them just 100$ of their goal, but there’s a whale about to put them over. Bully, Tyler (Tristan Allerick Chen) has half-blackmailed Mei into appearing at his upcoming birthday party—I say half-blackmail because he still pays her for the appearance. Unfortunately, the night of Tyler’s party Mei’s Grandma and aunties all arrive at her house (Grandma is played by Wai Ching Ho, Aunts Chen, Ping, Lily, and Helen are played by Lori Tan Chinn, Lillian Lim, Mia Tagano, and Sherry Cola respectively). This hiccup causes Mei to be late, but more importantly, it brings back her doubts about using her panda so cavalierly (Grandma reminds her that the panda is no joke and the ritual to suppress it won’t work if the panda is too strong).

When Mei arrives at the party she tries to get around turning red, but Tyler and his guests aren’t having it. Eventually, things come to a head and Mei attacks Tyler. Her mother arrives, blaming Miriam and the others for Mei’s bad behavior, and sadly Mei doesn’t fess up to her part in the mess.

At home Mei’s father, Jin (Orion Lee) finds the camcorder with a video of Mei and her friends embracing her panda. He explains that people have many sides to themselves and Mei shouldn’t be ashamed of her panda. Hearing this, Mei ultimately rejects the cure that would seal her panda and defies her mother to go to the concert—having finally revealed that it was her idea to use the panda as a fundraising tool. Ming is livid, her totem (which is what holds the sealed panda power) is cracked and breaks allowing her panda to release. Jin hinted earlier in the movie that Ming’s panda was not to be trifled with and we learn now how true that is—Panda Ming is a kaiju-sized monster bent on retrieving her daughter from the concert. Mayhem ensues but Mei, her friends, her family, and even 4*TOWN all come together to help Ming get her panda under control again.

The movie ends with Mei keeping her panda. Her mother, grandmother, and aunties all seal their pandas away again, but now with perhaps a bit more understanding for who they really are. Also, hilariously, Mei’s family needs to pay back the Skydome for all the damages her mother caused.

What Turning Red Is Really About 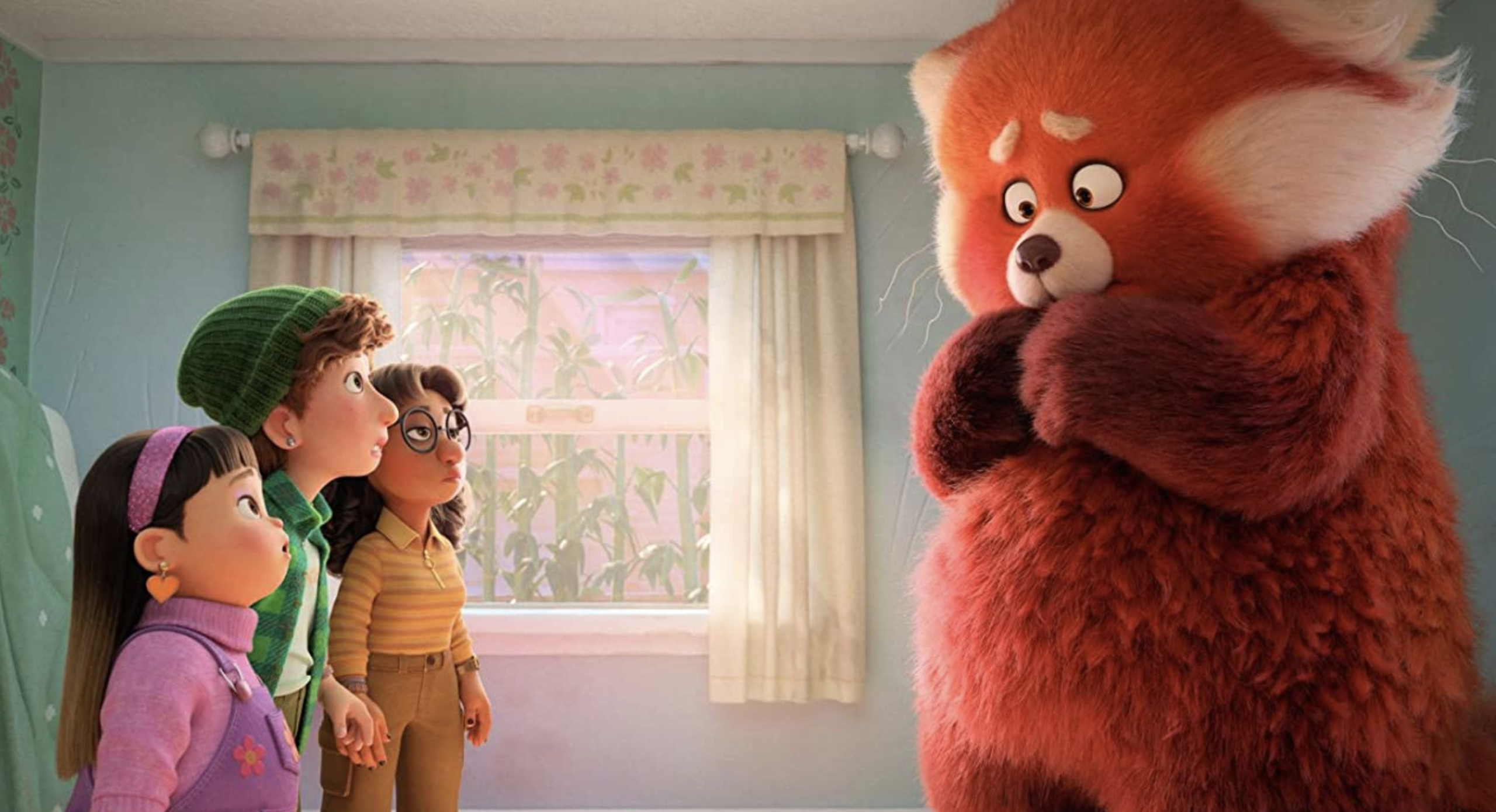 A lot of people who review this movie take it at face value: the red panda clearly signifies puberty, or, specifically, a girl’s first period, but consider the panda as something more conceptual. For one thing, there’s this idea that suppressing who you really are to live up to someone else’s idea of who you are isn’t a real solution. When Mei initially controls her panda it’s a shallow grasp. However, when Mei’s friends accept all of her, including her panda, it makes controlling the beast effortless. In every moment where Mei might break she has only to think of her friends singing to her and the panda is no longer an issue.

There’s also the panda as a metaphor for female empowerment and how society deems it useful until it isn’t. Sun Yee gains the panda power when all the men of her village are off fighting and need a way to defend the ones she loves. Sound familiar? Because during the world wars, women were suddenly thrust into the workforce, and even sports, in order to “support our boys on the front line, at home”, but, once the wars ended women were ushered back into their respective “places” and told to repress any of the empowering feelings they may have gained.

I’m not gonna pretend that last point isn’t a bit lofty for an animated children’s cartoon, but given the current climate of #metoo, and #seeherbeher, I don’t think it’s an outlandish claim. This is only the second Pixar film to be helmed by a woman—the first, unsurprisingly, being Brave. Watching the “Making of” film about Turning Red, one of the women on the production even comments that this was the first project she’d worked on where all the major players were women.

I will say that I’m not a big fan of female lead movies always having to be about family—specifically the mother-daughter dynamic, but I am glad that this movie has a lot more going for it than just that one note. Especially if you take the time to see it. The importance of female friendship for a girl is one I hope every girl who watches this takes away. Self-acceptance is fantastic, but it is helped along in leaps and bounds by having a strong support system. Movies about female friendship love to focus on the strain these relationships experience as the girls grow into teens and then into adults, but I wish more of them would embrace healthy friendships.

Turning Red is also a good movie for parents and children to watch together. It provides a jumping-off point for mothers and daughters to have what can be an uncomfortable conversation. It also helps parents, in general, to open a dialogue about the can of worms that is puberty.

Overall I enjoyed this movie a lot. It reminded me how much I miss my friends from middle and high school, not to mention the simple pressures of tests and papers vs real-world bills and work.