True Detective: “Down Will Come” Review

“Down Will Come” marks the halfway point for the second season of True Detective, and although some suspects have finally come into focus, Caspere’s murder and involvement in the land deal remains shrouded in mystery. Things are still moving a bit slowly, as the past returns to haunt our main characters, but the climactic shootout punctuates the episode nicely. It’s a uneven episode that suffers from weak pacing and character development, but the explosive ending clears the air for the second half of the season.

As it turns out, Paul Woodrugh has turned into one of True Detective’s more interesting characters. In contrast to Ani’s stubborn stoic or Ray’s jaded drunk, the past two episodes have revealed new and more compelling layers in Paul. Waking up at Miguel’s apartment has awakened a fresh wave of self loathing, a situation exacerbated by a stolen bike and media attention for his history with Black Mountain. Later, he reconciles with Emily and decides to  marry her after learning she’s pregnant, providing the least convincing delivery of “this is the best thing that could happen” ever shown on television. His repressed homosexuality and time as a private military contractor don’t add anything particularly novel to the tormented former soldier archetype, but nevertheless provides a complexity we haven’t really seen in the other main characters, who have so far mostly been quick-tempered and self-medicating. 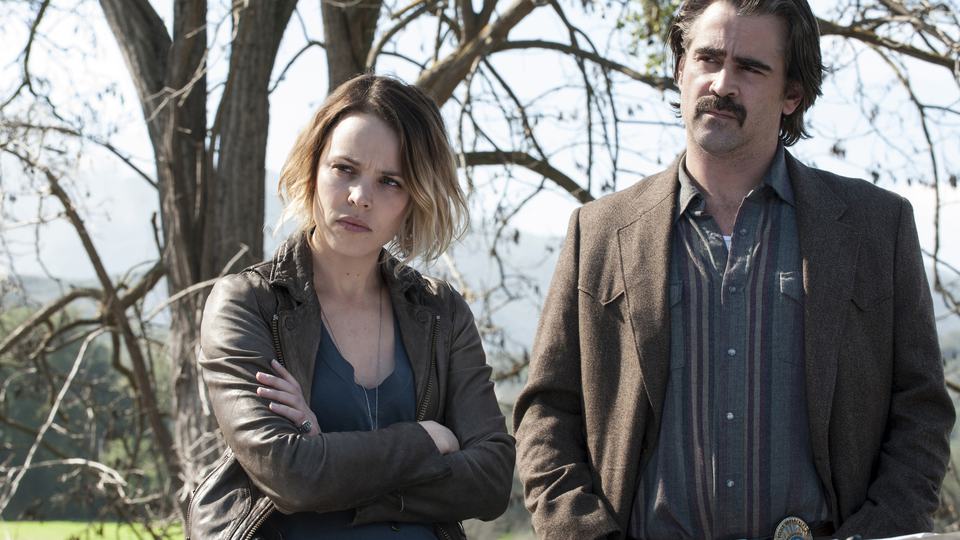 Much of “Down Will Come” is spent confronting–or being confronted by–the past. Frank is revisiting his old criminal enterprises in an attempt to reestablish some financial footing. Though he still has the muscle and menace to take back what he previously walked away from, it’s clear that not everyone is pleased to see him return. Along similar lines, Frank’s suspicions have shifted towards his associate Blake Churchman, who was friendly with Osip and has been conspicuously unreachable recently. Meanwhile, Ani and Ray pay another visit to Eliot Bezzerides at the Panticapaeum Institute after learning of his old connection to Dr. Pitlor and the Chessani family. Not much new information is revealed beyond their association (and Ray’s green and black aura), but True Detective has always taken its time tracing the mysterious threads that bind its characters together.

With the exception of Woodrugh, the main characters’ more personal issues are a weak point of the episode. All of Frank’s problems have strained his relationship with Jordan, who’s still trying to get pregnant and be a supportive wife. Their bickering isn’t particularly interesting to watch, and sadly Kelly Reilly’s talents are wasted on sarcastic snipes such as “Here’s an idea: let’s be one of those couples that fights a lot. That’s a great fuckin’ idea.” True Detective often struggles with how awkward and heavy handed the dialogue can feel at times, even without the lengthy philosophical ramblings. Despite the actors’ talents, they can’t help but stumble over the clumsy or obvious dialogue–when a formal complaint of sexual misconduct is filed against Ani, the scene ultimately ends with an exasperated “with friends like these…”

But what better to cut through all the obligatory characterization and slow simmering investigation than a huge shootout? When some of Caspere’s stolen possessions turn up in a pawn shop, the detectives are able to trace it back to Irina Rulfo and her pimp Ledo Amarilla. As the police prepare to raid his location, they are instead ambushed by Amarilla and his associates, who were prepared for them. In the carnage that ensues, the hideout is destroyed in a massive explosion and there are many civilian and police casualties (including Detective Dixon)–only Ray, Ani, and Paul remain standing when backup finally arrives.

It’s clear that a simple robbery is too neat of a story to properly explain Caspere’s bizarre murder, but there will be a huge fallout from the disastrous firefight for our detectives to deal with before we see much more progress in the investigation. With problems closing on our heroes from all sides, it’s a race to crack the case before their by their own demons catch up to them, or worse.