It feels like Nic Cage has been making movies forever. And no, that’s not me making a bad joke about how he’s supposedly been alive since the Civil War (though that would explain a lot). While it’s evident his glory days are in the past, he’s pulled off the impossible in his latest film. Not only does Nic Cage feel relevant again, but he does so by parodying his own career. The Unbearable Weight of Massive Talent not only pokes constant fun at itself but repeatedly breaks the fourth wall. It’s a buddy movie, a quasi biography, and even an action flick. And somehow, it doesn’t trip over its own feet, not once. Keep reading to see why this isn’t only a must-watch film, but the best Nic Cage movie in ages.

The movie starts unexpectedly, with a young Hispanic couple watching Con Air in their home. The woman is remarking how much she loves Cage’s acting when something even stranger happens. The doorbell rings, and the boyfriend goes to grab their food delivery, only to be met by armed, masked men. They quickly burst in, knocking the couple unconscious and taking them hostage. Honestly, the result of this sequence was that I suspected that the rest of The Unbearable Weight of Massive Talent was just some fever dream in the girl’s head for most of the movie. But rest assured, that’s not the case.

The first arc of the movie is all about the woes of Nic Cage. He’s trying his best, constantly working, but is cognizant that’s not enough. He has massive debts, he’s separated from his wife, he’s ridiculed by most people and just needs one good break to reboot his career. He thinks the he’s found just that, but then he goes too hard and scares off the director. Cage’s agent Fink is portrayed by none other than Neil Patrick Harris, who delivers every scene with a wink and a nod. While Fink may not have Nic’s best interests at heart, he has one more opportunity for him. An eccentric billionaire wants Cage at his birthday party. So the newly down on his luck Cage grudgingly agrees, thinking this will be the last gasp before he quits acting forever. 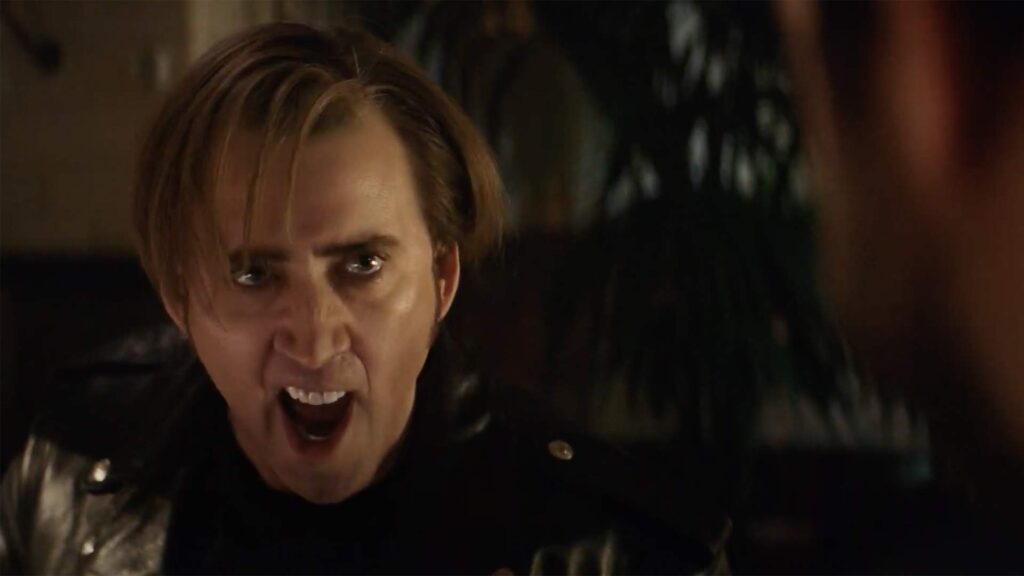 I will say, one of my favorite elements of this arc, other than Nic’s awkward relationship with his young daughter and estranged wife, is his doppleganger Nicky. Only Nic can see and hear him, and he’s essentially Cage’s worst instincts brought to life. He’s arrogant, manipulative and power hungry. He’s also eerie, like some uncanny valley version of Cage. I’m sure it’s still Nic acting as him with some visual filter in play, but Nicky is utterly strange and totally hilarious. Especially when he convinces Nic to do the wrong thing before making out with him for a really long minute.

Actually, as a quick side note, I thought Nicky was a herald of more dopplegangers to come in the movie. I was actually envisioning a whole cadre of them, arrayed in a circle inside Cage’s mind, not unlike in the horror movie Split. Because honestly, there has to be more than one voice calling the shots in Nicolas Cage’s head. But sadly, only Nicky showed up in Massive Talent. And honestly, I better quit before I give the actor ideas for extended sequels. 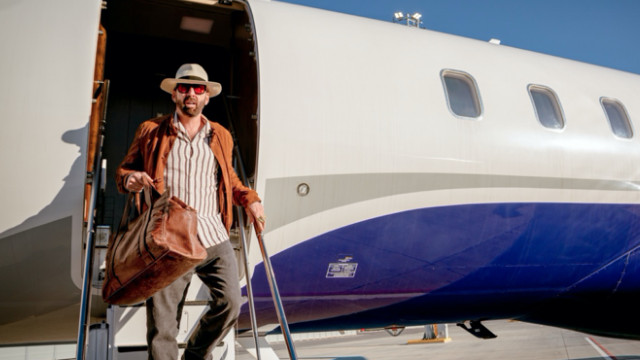 Where things really start to pick up, and transition from quasi biography to buddy film, is when Nic takes Fink’s offer and winds up on the island of Mallorca. He’s there because Javi Gutierrez, played pitch-perfect by Pedro Pascal, is a super fan of the actor. He wants Cage to star in a movie he’s written a script for. Suffice to say, once Cage finds out, he’s not eager for the opportunity. But somehow, despite how clingy and emotionally open Javi is, Cage and him develop a genuine friendship. Which makes it awkward that Tiffany Haddish’s character believes Javi is a cartel boss. 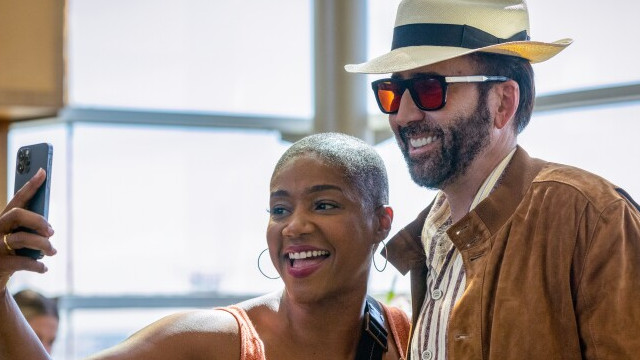 Yes, I wasn’t sure about Haddish as a CIA agent either, but she brings a lot of great humor to the role and is believably tough. She and her partner basically force Cage into working with them, but only after he starts thinking of Javi as a friend. He cannot believe the claims against Javi, but is still pushed into helping by Haddish. Cage starts gathering information for them and begins looking for the girl kidnapped at the beginning of the movie. One of my favorite sequences is when Cage accidentally doses himself with a knockout agent meant for a patrolling guard and gets locked out of the room with the counteragent. He has to crawl outside on a ledge to get back, nearly falling over his own two feet as sensation rapidly leaves his body. Haddish yells at him via an earpiece and manages to keep him from falling to his death. When he inevitably passes out, she wakes him by yelling “Action!” in his ear.

Another amazing scene is when Javi is looking for inspiration to alter the movie script and has Cage and himself drop acid before driving into town. I don’t normally think of Cage as a comedy actor (at least, not intentionally), but his body humor was remarkable in this sequence. I was doubled over laughing as Cage and Pascal were overcome by paranoia, and started running from an elderly couple. And though you’ve likely seen the moment in trailers where Cage and Pascal are trying to scale a small wall, it’s so much better in theaters. 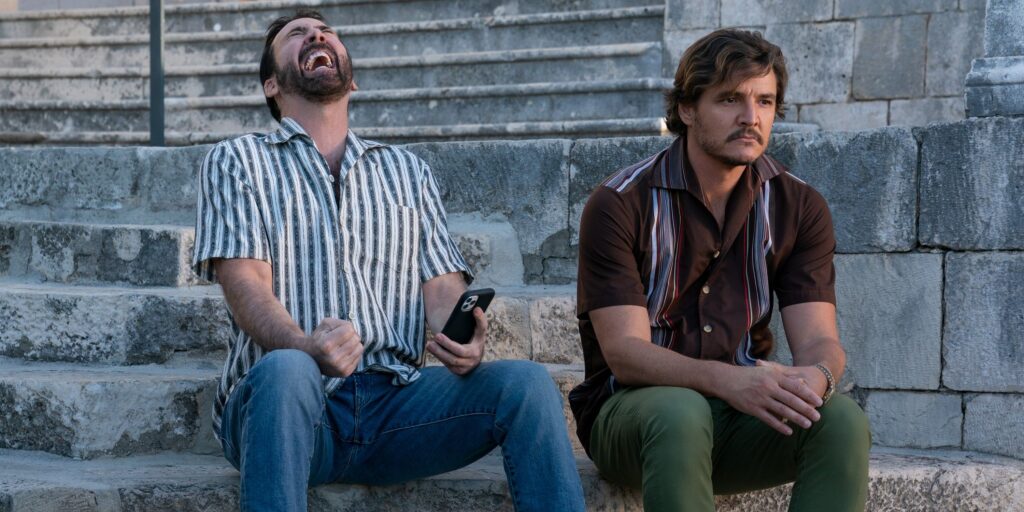 The final arc of the film is where it turns into an action flick, and somehow it doesn’t ruin any of the humor. Cage has to finally confront Javi about his supposed role as a cartel boss, and there’s a lot of good stuff that happens. Cage’s family gets kidnapped, people get shot and all sorts of mayhem occurs. But my favorite bit is when Cage has to disguise himself, because it may be the Cage-iest thing he’s ever done. I won’t ruin it by saying more, suffice that you have to see the scene to believe it.

In the end, Cage’s career (in the movie) gets rejuvenated, his family dynamic gets repaired and we finally get the answers we need about Javi. And while I am uncertain if the real-life Nic Cage will get such a happy ending, I am very happy that he got this film. Earlier I said The Unbearable Weight of Massive Talent was the best film of Cage’s in ages. I want to amend that. This is easily his best film, ever. It shows he’s incredibly aware of his own mythos, and instead of being offended by it, he plays into it with humor and style. Cage might get a bad rap, but this movie shows that despite it all, he’s only human.