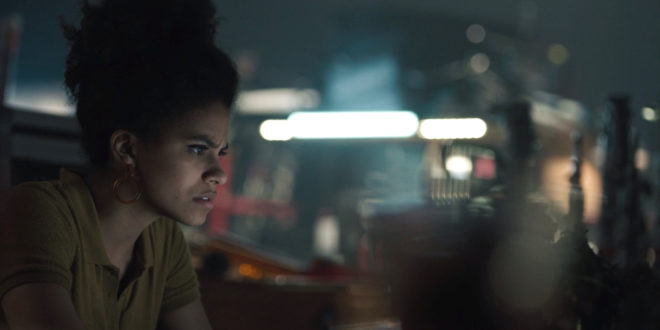 So much has been said about this new “Twilight Zone” series. There’s a great love/hate for it. The people who love and defend it do so with the same fire and passion as those who absolutely hate it. I mean, check it out, as of 6:53 AM (PST), the IMDB trolls have already voted “1 out of 10” enough times to set the overall average score at a “5.7”, which is fairly ridiculous. The episode isn’t even close to a score like that. In fact, none of the episodes are rated accurately on IMDB. I’ve said this much already. I don’t usually talk about this in my reviews. You’re really not supposed to. But I’ve found that, with this week’s episode (and season finale), entitled “Blurryman”, there’s really no way I can avoid mentioning what other people think of this show…mainly because the finale is self-aware, paying homage, not only to itself, but to its long, storied history.

Last week’s trailer for the show seemed to tease the story of two characters being haunted by a mysterious figure the show was calling “Blurryman”. Except the show opens a bit differently: a writer by the name of “Adam Wegmen” (Seth Rogen) is struggling to fix a script that’s been sent his way. He’s berating himself for being unable to think straight. He calls himself a terrible writer — until, BAM! He hits it. He starts the story just after the world has ended. It’s fixed! And he’s ready to go out with his significant other (Betty Gabriel of Jordan Peele’s “Get Out”) to celebrate in the city…which he discovers has been completely destroyed, much like the world in his story. “It was only a story,” he says, almost inaudibly. His girlfriend tells him that they need to get to a shelter because “The Reapers will be coming soon.” Cue Jordan Peele who gives our requisite Twilight Zone opening monologue — except, he cuts it short because the monologue just isn’t working. So, the director yells “CUT”, bells ring, Peele calls for his writer, Sophie (Zazie Beetz) and the two have a discussion about simplicity, genre writing and how it all applies to what Rod Serling originally envisioned when he created “The Twilight Zone”.

It isn’t long before the opening monologue has changed to something more to Peele’s liking and we try again…only to discover that, unbeknownst to everyone on set (including Sophie), the new monologue, in a veiled manner, describes a future ordeal that Sophie is about to experience, something having to do with the inability to run from something which “lurks, blurry, in the background of her show”. Everyone the set thinks Sophie’s being a smartass while Peele and Rogen absolutely love that Sophie’s frustrations are turning to fun on the set. Everyone’s in the moment — except for Sophie who has no earthly idea how she became the center of her own episode. Peele tries to assure her that it’s “probably a prank for a blooper reel” but that it’s pretty cool that “she’s in her very own episode of The Twilight Zone right now: a writer who can’t face her fears”. But what does Sophie fear? She’s jaded, having watched this show as a child and as she grew up.

As Sophie attempts to do damage control around the set, she’s told that the director is furious because she was obviously referencing “the blurred figure in the background of every shot of the episode” which Sophie’s just got to be behind since she was successful at pranking the crew with the new monologue. Except that Sophie’s even more clueless about the entity than she is about the cue cards being changed and, pretty soon, Sophie is stalked by the figure she sees on the editor’s monitor. I don’t think I can say much more about the episode because that would be absolutely criminal. If you want to know how it ends, I’ll post the spoiler in “LOST IN THE ZONE” and you’re free to discuss it.

One of the great things about this episode is that it’s a return to form, of sorts. The premise and the antagonist are goosebump-inducing. The name of the entity/episode, alone, is enough to make you turn your lights out and settle in on the couch with a blanket you can use to cover your eyes when things get too intense for you to watch. This is something that has been effectively missing in a series that was astute at balancing the supernatural “campfire tales” and science fiction argle bargle with moralistic storytelling, something Sophie points out to this “version” of Jordan Peele, who seems intent on telling a story in a way that’s far too simplistic than what “The Twilight Zone” actually deserves, in Sophie’s opinion.

But the best thing about “Blurryman” is that it’s all Meta from top to bottom. Meta, as we know, can be to one’s advantage or detriment depending on the execution. The writers and producers who dabble in it live and die by the sword. When it’s done lazy, you’ll end up with something like that episode of MTV’s “The Osbornes” where Ozzy’s son murders his dog in his sleep (sorry to remind you of that bullshit). When it’s done right, you end up with a flawless diamond like The X-Files’ “Jose Chung’s From Outer Space”. Sure, you might wonder why the Blurryman is so violent and hostile, given the big reveal at the end, and the climax and resolution might be seen, by some, as too silly and self-serving but it’s one of the only twists in the new series that  you cannot possibly see coming and it also works as a near psychological self-examination, a beautifully meditative analysis of itself and what the “The Twilight Zone” is or can be.

I dare say that it’s easily one of the Top 3 episodes of the new series and one of the greatest episodes ever produced over all four incarnations of the show’s history.

Matt Perri is one of those literary Ronin you’ve never heard of until he shows up and tells you he’s a literary Ronin. He’s a native Californian, a film buff, old school gamer geek, and a sports/entertainment fan. A lifelong Giants, 49ers and Sharks fan, he also covers the world of pro-wrestling, writing recaps for WWE Monday Night RAW and Total Divas at Scott’s Blog of Doom. You can follow the guy on Twitter via @PerriTheSmark as well as here at The Workprint and his own blog, We Hate Your Gimmick.
@PerriTheSmark
Previous ‘Archer: 1999’ Podcast Review
Next ‘What We Do In The Shadows’ Review: Season Finale – Long Game 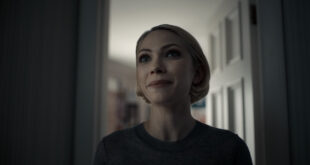 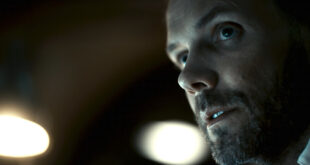 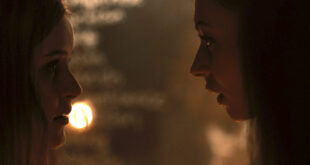 ‘The Twilight Zone’ Season 2 Episode 5 Review: “Among the Untrodden”

Another day, another Season 2 review of The Twilight Zone on CBS All Access. Here …