The Spy Who Dumped Me, directed by Sussanna Fogel, is a buddy comedy action movie about two female best friends who get thrown into the world of international espionage.

When Audrey, your everyday woman (Mila Kunis), celebrates her 30th birthday she isn’t exactly thrilled. She is working a dead-end job at a grocery store, has no future prospects, was recently ghosted by her now ex-boyfriend, and above all else, is feeling: unaccomplished.

She gets by through her love of shooter videogames and the support of her best friend, Morgan, played by the hilarious Kate McKinnon, of Saturday Night Live fame.

Morgan is a woman whose positive energy and in your face femininity empowers Audrey in a fun, yet often unpredictable fashion.

Shortly after her lackluster birthday, Audrey and Morgan find themselves embroiled in an international conspiracy when Audrey’s ex-boyfriend, Drew (Justin Theroux), unexpectedly re-enters her life with a team of assassins on his trail. He reveals that the reason for the breakup is that he is in actually, a CIA agent on the run.

Needing to get a device from point A to point B for the fate of some unforeseen global threat, he bequeaths his quest to his ex-girlfriend if she so chooses to accept it…

Which obviously, she does.

The Spy Who Dumped Me hits all the right beats for a high concept spy comedy.  The issue is that the story is just that: too formulaic. It’s derivative and predictable. Though there is one exception the movie excels at: it doesn’t shy away from the action. Which was sort of the point of the movie.

“It’s important for me that the action be just as fearless as the action in a male-driven movie, and that we don’t hold back, we don’t try to like soften it.” – Director Sussanna Fogel

Through outstanding action choreography and quite the eclectic comedy range from Kate McKinnon, the movie is enjoyable, yet forgettable.

Here’s me breaking down the movie rather easily:

In act one, we introduce Audrey and Morgan in the world before. Audrey is your everywoman, a nobody who is at a life crossroads in life, working at a dead-end job and feeling like she missed out. The best thing she has going for her is her boyfriend, who is intriguing yet ultimately distant.

She has a best friend named Morgan, a zany, intrepid, heart on the sleeve type of woman that doesn’t shy around about being herself. She is bold, albeit reckless at times, and carries most of the comedic beats.

The breakup is your inciting incident that forces change upon the characters that gets the story moving. The ex-boyfriend bequeaths a mission for our two heroes to go on. They say yes, which forces the break into act two: The promise of the movie premise. 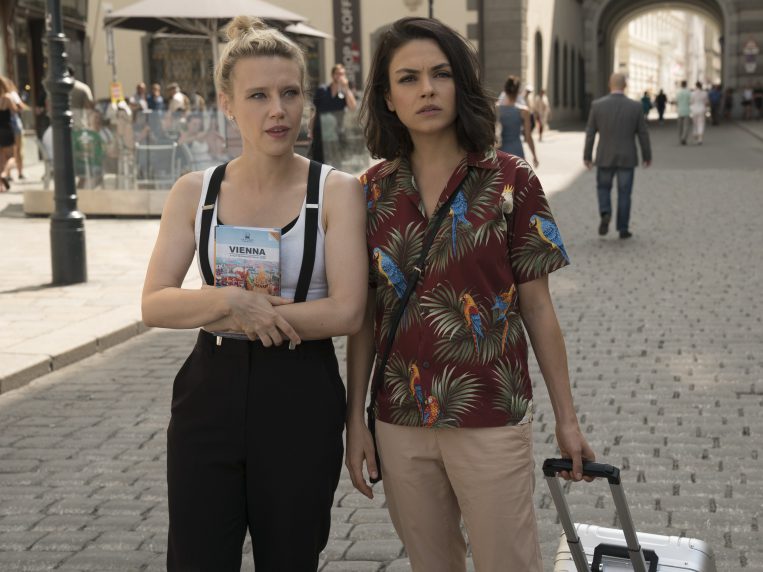 The two besties now go travel across gorgeous European cities acting as pseudo-spies, faking it until making it, all while discovering something about themselves along the way: their true potential. This is where we see most of the premise of the movie, everything we paid money to go see: Gorgeous travel pieces, epic action sequences and of course, conveniently accessible romance, all while being introduced into the world through convenient exposition explaining its rules.

Then we reach act three. Where just as in most spy thrillers, not everything is as it seems. The movie showcases some very foreseeable twists and our heroines put their newfound skills to the test proving they have what it takes to be spies. Throw in a love interest, a climax beating the bad guy/revealing the true enemy, and that’s a very Hollywood spy movie.

Again, it’s formula to the utmost degree. Minus the spoiling details, the film doesn’t deviate from this predictable trope. So it’s entertaining yet again, negligible to keep attentive to.

Worst of all, were the annoying flashbacks forced into the movie to showcase backstory and keep us interested in The Spy Who Dumped Me.  Mila Kunis and Justin Theroux’s relationship was so unoriginal and not an organic at all for the story, that they forced in these randomly placed flashback scenes forcing depth of character. Which, honestly felt more like forced in scenes from older script drafts of the movie than something that fit into the flow of pacing.

What was a pleasant surprise, is the organic chemistry between Kunis and McKinnon. With many reviewers mentioning that while buddy comedies usually see two opposite characters at opposition, these two seem to be more like authentic friends. There isn’t a moment of catty woman vs woman drama, where the two eventually will need to reconcile. Instead, the movie does a good job of seeing best friends be supportive. A refreshing break from the usual.

Which brings us to the real gem of this film: Stunts. It should be noted that renown stunt coordinator form the Bond and Bourne franchises, Gary Powell, directed the action sequences. They are surprisingly high in quality. The violence was over the top yet never gruesome. The stunts were very impressive, edge of the seat thrill ride sort of motions. The scenes shot in Vienna were most noticable, particularly the fight sequence in the café and the chase scene across the city with people stuck atop the cars.

I write this because I noticed an issue with the film that many other reviewers also had: sub-genre. Many reviewers were taken aback by the level of violence in this movie. Some liked it, some hated it. Many expected a more female-driven spy comedy, a bit campier and more parodying, along the spy side like a Get Smart as compared to an action-driven movie like John Wick (Of which, was an inspiration for the film). This harms the movie’s potential bottom line, as is it your typical action movie or is it a female-driven comedy?

It beckons the question should Female Driven be categorized as a subgenre? For one, it opens the door to franchises. Wonder Woman or Bridesmaids immediately come to mind. For another, it limits the broader marketing, and therefore audience, potential of watching the movie.

“It’s as though Lethal Weapon, Superbad, and Shallow Hal had all been grouped together and called male-driven movies. It’s not just men who are guilty of this. Woke feminist writers do it too. And I get why: female-driven movies are still a minority. But at some point we should stop calling them such because it’s perpetuating our role as The Other and encouraging us to market our work only to other women.” – Director Sussanna Fogel, in an essay for Glamour magazine. 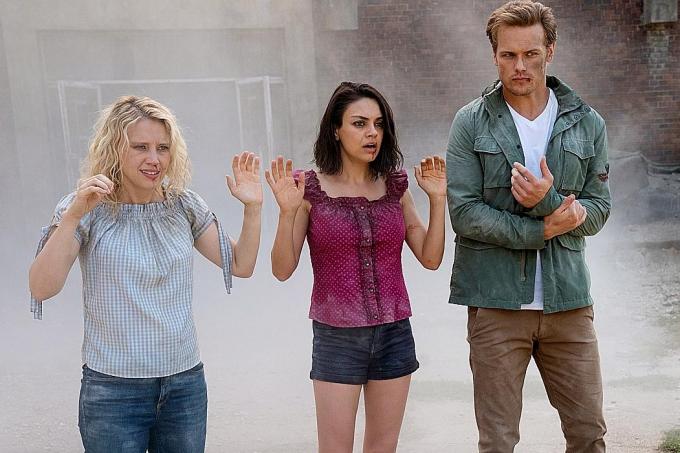 The cast does its best with a very cookie-cutter script. Parodying tired and old clichés while poking fun at spies, femininity, and issues of trust in a genre exhausted with the tug of war between secrets and lies.

Sam Heughan, of Outlander fame, plays a brilliant yet often stiff MI-6 agent in Sebastian Henshaw. His performance is on point and rather charming, though we understand almost immediately he serves as the eye candy romantic interest in the movie.

Justin Theroux, whom I personally am a fan of thanks to his penning of gems Tropic Thunder and Iron Man 2, was rather unlikable in this movie. His action scenes seemed epic but there was an odd divide in characterization between caring and unlikable and I think the latter won out a little too conveniently.

An excellent performance in the character Nadedja (Ivanna Sakhno), as a memorable East European gymnast turned assassin. Honestly, the gymnast portion felt strange and slightly forced, akin to the oddities of a Bond Hench villain, up until the final act. Where it all sort of hilariously fit together. 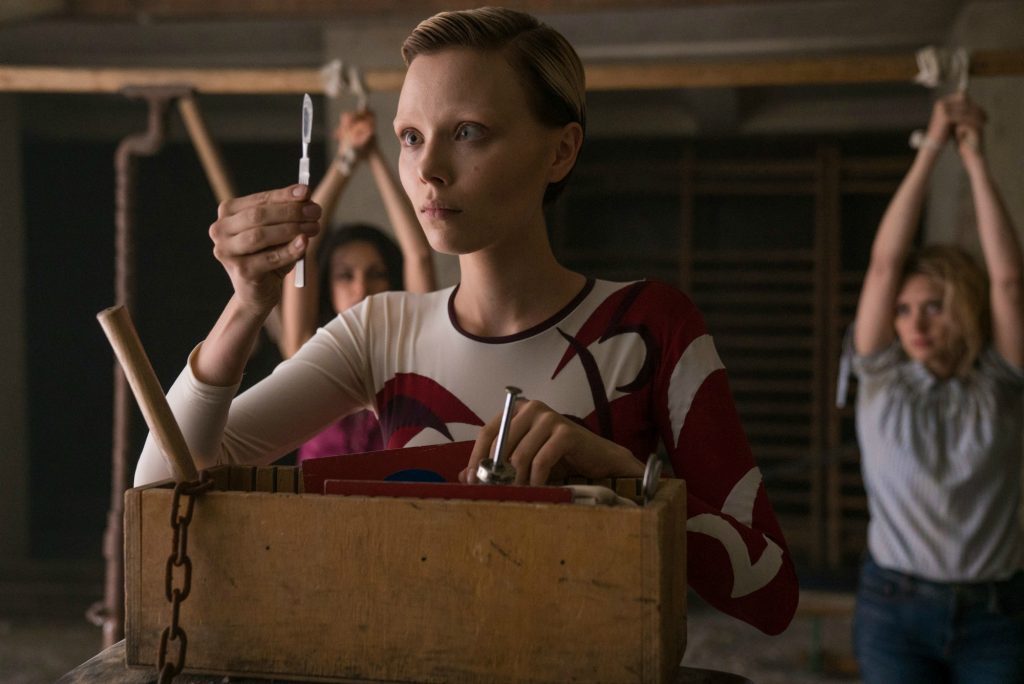 Gillian Anderson, playing the head of the spy organization was a delight, yet also brief, and feeling a tad underutilized. Seemingly there just to portray a power authority figure for Kate McKinnon’s character to pine over.

Kate McKinnon hands down is on point and the best part of the movie. You can tell the director left her with lots of room for improvisation. Her one-liners, gags, and room to play with it showcase here, including some improvised scenes with Mila Kunis that felt authentic and truly friendly.

Mila Kunis, suffered from lead character boredom. She wasn’t whiny but she also didn’t have many interesting things going for her. But by the end of it, on paper, she shows significant growth, yet for some reason, it’s not as enjoyable seeing it within the movie’s runtime. Though she had just enough to have an arc of growth and independence, I think much of it felt lost in gross-out gags, ultra-violence, and bodily insertion jokes.

Watch The Spy Who Dumped Me if you like popcorn films and predictable spy dramas. Enjoy the action sequences as they’re fantastic, as are Mila and Kate’s chemistry, with Kate McKinnon’s comedic beats standing above anything else.