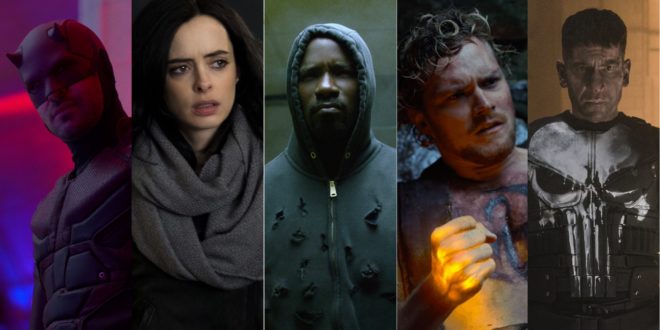 So, something a touch different this time: because these shows are definitely set in the same “microverse”, I’m going to do the “MCU Connections” last and that will combine all five shows since I will simply be repeating myself.

So, without further ado, let’s get into it..

By day (I love that, “by day”), Matt Murdock (Charlie Cox) is a lawyer who serves the public. He’s also blind, having been so since he was a young boy, following an unfortunate incident with a chemical truck that crashed and nearly struck him. By night, Murdock is known as “The Devil of Hell’s Kitchen”, a crime-fighting vigilante who has tuned his other senses to compensate for his lack of vision. Along the way, he has to deal with the menacing “Kingpin” in Wilson Fisk (Vincent D’Onofrio) and a group of supernatural ninjas known as “The Hand”.

Hell yes. “Daredevil” erases all the pain of the terrible Ben Affleck version from the last 90’s and gives us the hero as he was meant to be: dark and gritty and, at times, mean but always with pathos. The inclusion of Father Paul Lantom (Peter McRobbie) provides for a nice dichotomy to Matt’s violent ways and the rust-and-haloden color scheme, straight out of the comics, is a beautiful touch. The series was abruptly and inexplicably cancelled even though the series was critically acclaimed and extremely popular and an extensive amount of work was being done for the 4th season with the cast signed through five years. There are rumors that Disney will revive the series on their new streaming service but this isn’t a sure thing.

Krysten Ritter stars as the titular “Jessica Jones”, a former superhero who gave up that life after The Battle of New York made a lot of people hateful toward human beings with abilities. That combined with the ironic murder of an innocent woman at her hands while she was under the influence of Kilgrave (David Tennant), a man with the power to make people do whatever he wants them to do has left her cynical, mean, with a heavy dependence on alcohol and a shell of her former self. Regardless, she works as a private detective where she occasionally uses her powers for good.

Yes, if you can handle the same level of violence “Daredevil” offered up. At times, it gets so bad, it’s horrific (the finale where Jessica finds Kilgrave’s father cut to pieces with one of his arms sticking out of a garbage disposal is just gratuitous) and there are times when Jones is so abrasive (even toward a fellow addict), you nearly give up on the series but her sisterly connection to Trish (Rachael Taylor) is what makes the show tick and Luke Cage (Mike Colter) makes for a great outlet for her more lusty side. The second season  The second season is more story-driven and talky and deals with Jessica and her long, lost mother and is a bit of a slog to get through so I can’t totally recommend it if that isn’t your thing. Like Daredevil, Iron Fist, Luke Cage, The Punisher and The Defenders, this was cancelled as well despite its popularity. Still a solid show.

A former ex-con, Luke Cage (Mike Colter) underwent an experimental procedure to heal his prison wounds and enhance his body, not unlike Captain America. After escaping from Seagate Prison, Cage sheds his old persona, alters his appearance and lays low in Harlem to rebuild his life. After thwarting several crimes and becoming extremely popular within his community, however, it’s apparent that Cage can’t hide forever — and attracts the attention of Harlem’s gangster element who will stop at nothing to bring him down.

To a point. After “Daredevil” and “Jessica Jones”, I got a bit fatigued with the Marvel TV properties. Colfer makes a great Cage. He looks and plays the part well. His supporting cast is great and I love the feel of the show, especially the sense of community and the sense that we finally got a series with a black superhero rather than resorting to making another white superhero series to add to the existing pile. Unfortunately, the first season doesn’t have the focus of “Jessica Jones” or “Daredevil” and comes off as uneven. The second season is better than the first with an interesting finale which makes the viewer wonder whether or not Cage will succumb to darker impulses, despite his intentions to be great. As mentioned, the series was cancelled despite popularity and viewership.

Years ago, Danny Rand (Finn Jones) and his family were involved in a deadly plane crash high above China. Miraculously, Danny survived and was taken in by the inhabitants of the hidden city of K’un-Lun where he was trained in advanced martial arts and learned how to harness the power of the mystical Iron Fist. Years later, when he comes back to confront the people who have taken over his company, he is gaslit into thinking he’s an insane person, proving that he not only has to fight off physical opponents but also fight for his legacy.

This series received a lot of grief when it came out because 1) critics felt the series was boring and made for the sake of setting up “The Defenders” and 2) for some reason, there was a whole debate about changing Danny Rand from a white man to Asian American man in order to continue the “diversity” Marvel had been showing with Jessica Jones and Luke Cage. At one point, Rand was compared to Donald Trump simply because they had the notion of both being “white billionaires”. Fans are weird, folks. Whatever the case, I thought the show was decent and I loved Jones playing up Danny’s child-like wonder and nostalgia, even in adulthood. The first season ended with a thud but the second season picked up the pace. It was a solid entry but “Daredevil” simply eclipsed everything Netflix put out. As mentioned, “Iron Fist” was cancelled despite popularity.

Years ago, Frank Castle (Jon Bernthal) was with his wife and kids in Central Park. Unbeknownst to him, a hit had been ordered on Frank by members of his former military team because they believed he leaked information about the illegal torture and killing of a Jihadist militant during Frank’s years in the service. A firefight ensued involving three different gangs and Frank’s entire family was gunned down as a result. Frank was also hit — but survived and plotted his revenge against the people involved in the hit. A self-described “asshole prick” who “just wanted to hurt people”, Frank has no remorse and enacts violent justice his own way. The series sees him doing so and also uncovering corruption at the highest levels of law enforcement.

I barely got through it. I’ve never much liked the character. Nothing wrong with Bernthal. He plays a very conflicted version of the character, thus I could never truly believe that he was that icy, deadly assassin the comics made him out to be. The second season is even more boring, taking the “Bruce Banner as a fugitive” approach to things as Castle, now presumed dead, attempts to help a young girl out of trouble. Overall, the series feels pointless and arbitrary and since he’s not a “hero” in the traditional sense, the series doesn’t really have the promise of anything else released before it. Thankfully, the show was cancelled, It’s the only Netflix property I really don’t care about or wish would come back.

It’s the Mini-Avengers! When Alexandra (Sigourney Weaver), the leader of “The Hand”, threatens to use her minions take over New York, the only thing standing in their way are…these guys. Matt Murdock (Cox), Jessica Jones (Ritter), Luke Cage (Colter) and Danny Rand (Jones) don’t get along but must work together for the sake of New York and the world.

Sure. I mean, you’ve come this far, right? The series is good and wraps up the “Phase One” story arcs of each character (if one could consider them “phases”) but the plot seems all too familiar as Murdock already dealt with The Hand in the second season of “Daredevil”. The four main heroes all have excellent chemistry (the Chinese restaurant where they finally have a “summit” is great) and Weaver shines as the ice-cold, matter-of-fact Alexandra but one might wonder if Elektra (Élodie Yung) might have been an extraneous cog in an already crowded machine. For what it’s worth, I enjoyed the series but with the future of the four main heroes’ series in doubt, so goes this show.

Join us a bit later as we cover the remainder of Marvel’s TV properties in Part 3!

Matt Perri is one of those literary Ronin you’ve never heard of until he shows up and tells you he’s a literary Ronin. He’s a native Californian, a film buff, old school gamer geek, and a sports/entertainment fan. A lifelong Giants, 49ers and Sharks fan, he also covers the world of pro-wrestling, writing recaps for WWE Monday Night RAW and Total Divas at Scott’s Blog of Doom. You can follow the guy on Twitter via @PerriTheSmark as well as here at The Workprint and his own blog, Matt's Entertainment.
@PerriTheSmark
Previous The Road to ‘Avengers – Endgame’: The MCU, Phase Three
Next The Road to ‘Avengers – Endgame’: MCU TV Shows (Part 3 – Hulu/FreeForm)