‘The Muppets’ Review: Fozzie and the Porcupine That Bought Dress Socks


Christina Applegate’s on Piggy’s show this week, and surprises her with an iPhone video of Piggy falling face-first into a cake at a party Applegate hosted. Gonzo uses a picture of Liam Hemsworth on his dating profile — and uses his connections to get Hemsworth to get a potential date into Gonzo’s hemisphere. Nick Offerman wants a cappuccino machine in his office…just because Kermit asked him if he could get Offerman anything. Some of this is funny, some of it’s shrug-inducing.

We’re on the third episode of ABC’s The Muppets and, maybe the honeymoon’s over — I’m not quite sure — but this episode lacks the edge the prior two episodes had. That isn’t to say it isn’t a complete loss. The humor is hit-and-miss (though Kermit empathizing with Fozzie’s woozy — as the result of a trank-dart — by admitting that he “once licked his third cousin once and the walls started melting” was the laugh of the night) — and, curiously missing still, or at least on hiatus, is the entire angle featuring Denise, Kermit’s “new girlfriend”. What’s left, at times, is a show that feels agonizingly bare-boned. 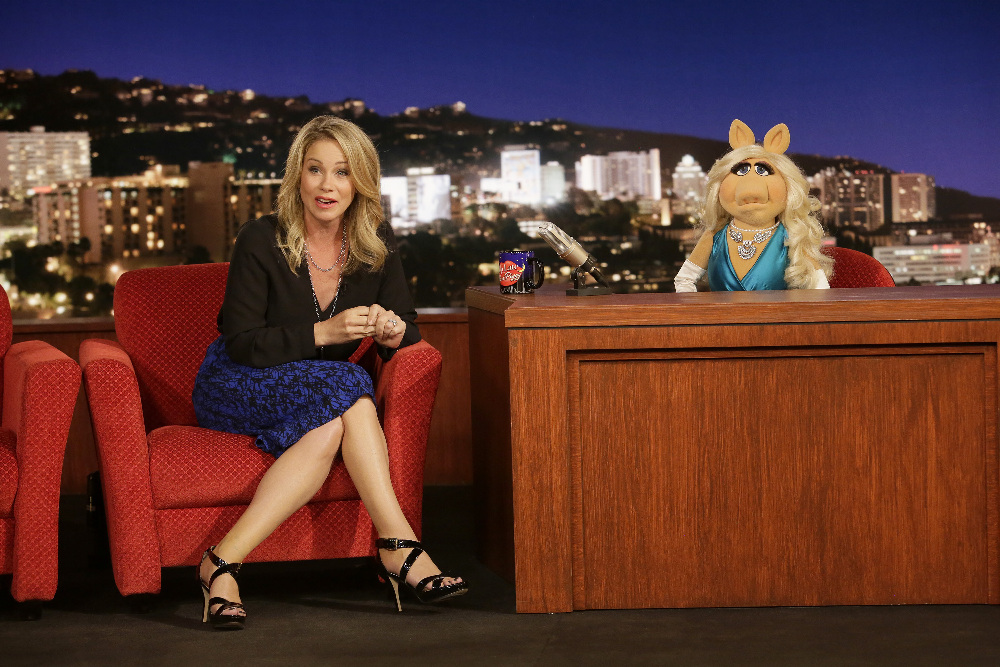 I can’t tell you how frustrating this is, not just because the show seemed to find its footing last week, but because the timing absolutely sucks on a cracker: the episode involves the exploration of the long-time camaraderie between Kermit and Fozzie. It’s a no-brainer on paper: Piggy hates surprises (hence the necessary severing of her friendship with Christina Applegate after her unfortunate surprise presentation of Piggy’s aforementioned on-camera gaffe) and Kermit isn’t going to press his luck by sneaking Fozzie’s curiously awful-sounding sketch (even by “Fozzie” standards) involving a “porcupine that buys dress socks” onto the show without Piggy approval.

This presents Kermit with a soul-crushing task of telling his long-time friend that he isn’t funny. Knowing full well he can’t do this to Fozzie, Kermit lies and gushes about Fozzie’s writing, telling him that it’s brilliant — in fact, Kermit says, it’s good enough for a movie. Fozzie believes his friend — and why shouldn’t he? As Kermit illustrates later, Fozzie was there for Kermit after he left his med school dreams behind (“It turns out all they wanted to do was dissect me,” Kermit laments.) and never let him down. This is hammered home when Kermit finally does tell Fozzie the truth, driving a considerable wedge between them. Naturally, Kermit realizes he only has one play: bringing his friend in from the cold…literally. Fozzie has actually decided to live alone in the woods surrounding Los Angeles in order to concentrate on his screenplay.

It’s a cute idea for this week’s A-story but it’s not exactly rewarding or particularly memorable due to its failure to resonate with anyone on any level. That’s mainly because there’s an underlying current of self-parody that prevents anyone from taking the story seriously. Prime example is the moment following Kermit’s confession to Fozzie about his bit. At first, Kermit aks where Fozzie is headed. Fozzie won’t tell him — but the GPS mapping system on his phone spills the beans. Fozzie, in a huff, attempts to hang up his iPhone. That doesn’t work, so Kermit has to instruct him:

Fozzie: “”I don’t know how to hang this thing up when it’s on the ‘map’ thing! Ugh! This always happens!”

That actually works. It’s really too bad that it feels out of place. 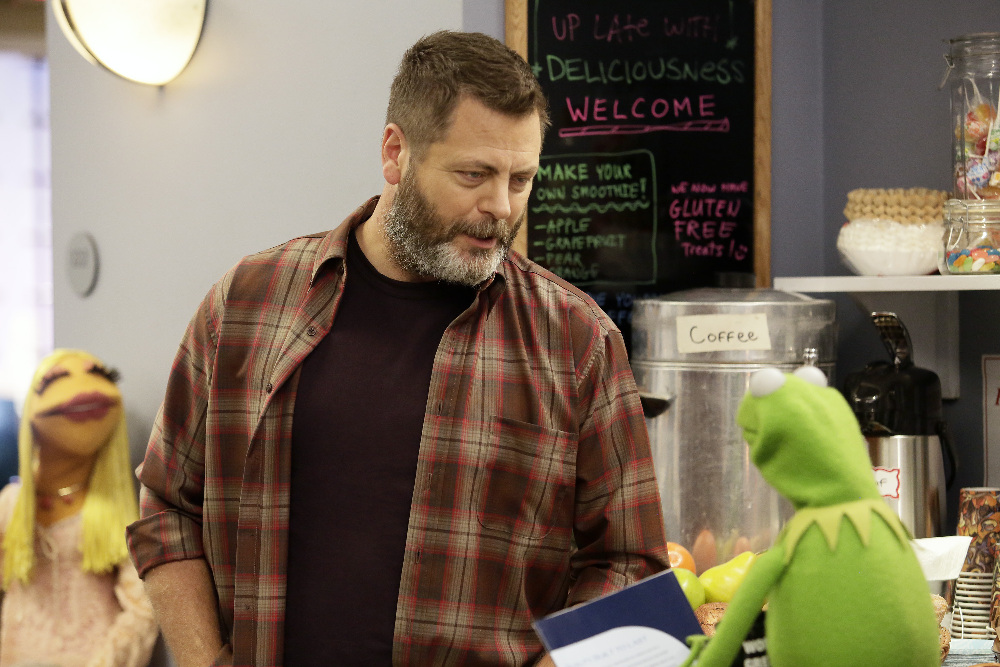 The one thing that saves the show is the ensemble of this week’s guest stars. Miss Piggy’s weak revenge plot against Applegate aside (does she have any “friends” left?), Nick Offerman temporarily joins the cast as Fozzie’s replacement and exudes his usual brand of James Spader-esque smarm (he takes back his request for a cappuccino machine and replaces it with a request for a boat named “Janice”, who he unashamedly flirts with), I can’t help but feel that his spot on the show was a bit of a missed opportunity. The best appearance goes to Liam Hemsworth who agrees to help Gonzo pick up “Debbie”, the cute little Muppet he’s been flirting with online. At first, Gonzo’s filled with self-doubt due to his looks. Rizzo tries to help out, insinuating that Hemsworth “probably grew in to his looks”.

“No, I’ve been gorgeous since birth, but I have struck out quite a few times,” Hemsworth replies, finally confessing, “Just at a super high level.” In a way, it’s probably fitting that Hemsworth nabs Gonzo’s girl (as aggravating as it is to see Gonzo fail in love) as Hemsworth ends up being Gonzo’s ironic opposite: he just wants to be seen as a human being and not as some “beautiful cheek-boned” sex object. 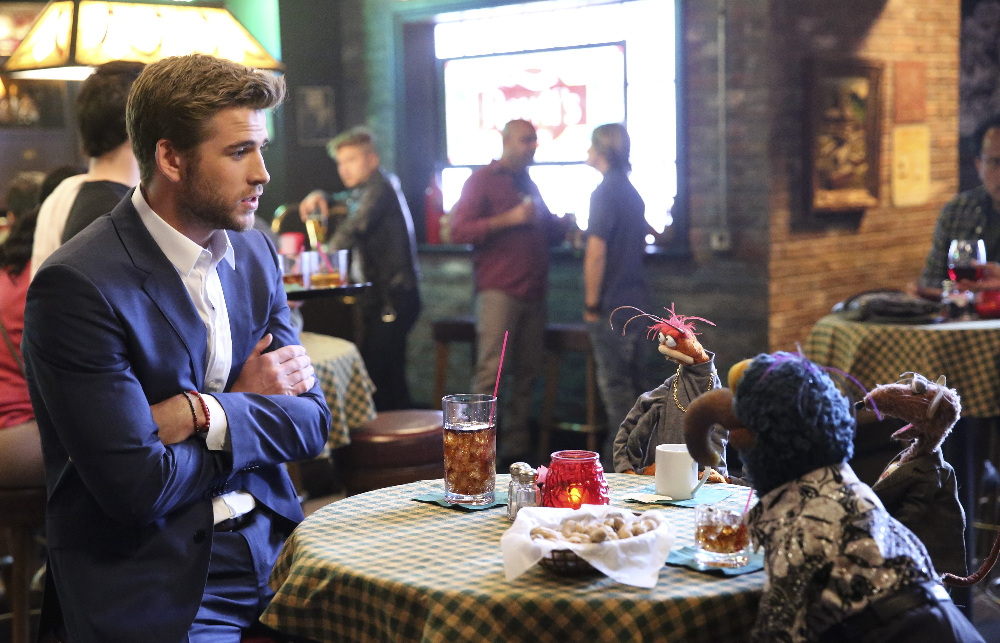 Maybe it’s us, the viewers, who are expecting far too much. These are the exact same Muppets we’ve seen for years. Maybe they’re a little older and wiser, but they’re the same. It’s just that I cannot shake the feeling that something’s missing. I get that the entire story with Fozzie and Kermit isn’t meant to be a deeply philosophical exploration of the common friendship, but the angles on this show are like cheap little fireworks that fizzle and burn out quickly — and that’s an apt description of this week’s story. It’s also the fact that the manic energy mixed with the serio-comedy wit that makes them what they are seems to be in short supply. Look, I’m not entirely worried about The Muppets. It’s young and still finding its footing — but that’s also off-putting. It shouldn’t really be “finding its footing”. The Muppets should be an easy slam-dunk week after week. It’s not Advanced Calculus. That lack of overall consistency is aggravating.