‘The Marvelous Mrs. Maisel’ Season 2 says Good-bye to all that

With a stellar Sophomore Season, the marvelous Mrs. Maisel says goodbye to Midge Maisel: the the Jell-O making trophy wife who had a life, husband, and a pleasant little niche of a home.  And while steps have been taken in this direction in season one, this season, takes on a different journey. One that crescendos from her fall from grace, with surprising levels of courage, but also, unseen heights of self-awareness. So drastic, that by the end of season two, Midge knows that from this moment forward everything is going to change, and nothing will ever be the same

The following is a spoiler-free review of the whole season. I’ll also be posting an episode-by-episode recap of the season, to be posted, over the weekend.

Directed and written by married couple Amy Sherman-Palladino and Daniel Palladino, the same team behind Gilmore Girls, The Marvelous Mrs. Maisel Season 2 is a step forward on almost every front. It’s fun, incredibly well written, and has the same abundance of energy and wit that makes the show, as the emmys agree, one of the most entertaining spectacles on TV.

When we last left off season one, Midge (Rachel Brosnahan) had begun breaking into the comedy club scene. Utilizing her recent life experiences for solid material, she was making the rounds and on the verge of a big break but sabotaged her career by bad mouthing the wrong people: Bigtime manager Harry Drake (David Paymer) and fellow female comedian Sophie Lennon (Jane Lynch).

And though she salvaged her career by pulling a Hail Mary and opened for renown comic Lenny Bruce (Luke Kirby), she also did so at the cost of salvaging her marriage to Joel Maisel, who realized not only did she steal his dream (by both doing comedy and being infinitely better at it), but that he was in many ways, the butt of the joke.

Overall, season two was surprising in almost every way. The camera work was surprisingly technical, the story: sublime. With funny bits and intriguing allegories about the modern age, mostly in how we treat women, what’s changed, and what hasn’t – all parodied through the lens that is the late 1950’s.

Major developments happen this season with how Midge looks at the world. A lot of which, can be attributed to her moments with new coming character, Doctor Benjamin (Zachary Levi).

She and Susie find alternative routes in booking gigs due to their blacklisting, and subtly throughout the season, find different ways to further Midge’s stand-up career. It’s all step-by-step but there are things to be taken away from the story. Moments of depth in the silence that if you read in-between the lines, you’ll see Midge is learning hard-taught lessons to succeed (One particular episode, has a certain recluse artist in mind – you’ll understand when you look back at it).

The universe of the show has always played with the idea of the struggling artist. This season, teasing fun at the difference between Midge and Susie’s lives, and how that affects how they treat Stand-up. Midge starts to understand: her place of privilege makes it so that failing isn’t as severe as it for someone like Susie. Her money, good looks and loads of friends are a luxury bubble she’ll need to learn to lean less on.

Still, she’s the charmingly witty and do-gooding person with a loud mouth we’ve come to expect. Who also steals the show whenever the chance behind a microphone presents itself this season, testing the limits of her uncanny charm. 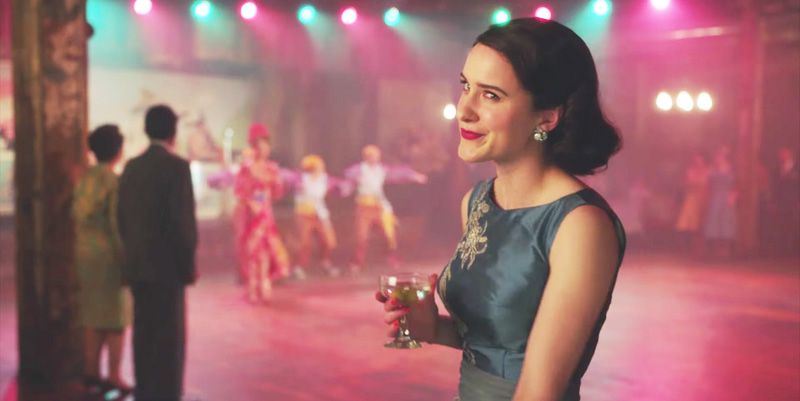 The writing is finely crafted this season. The jokes hit hard, the situations are awkward, and the dramatic elements, are well-hidden behind all the panache and sass.

Speaking of which, the set-designs are incredibly detailed for the period. With every object and label, pen and utility – specifically late 1950’s. Likewise, the costumes, are eloquent and fitted for the moment; each character, donning their particular sort of flair. I especially adored the costumes in the Paris, especially Rose Weismann’s character and her embrace of French culture.

Expect some excellent acting this season. With Luke Kirby doing a stellar reenactment of some classic bits from comedy legend, Lenny Bruce – as well as some charming bantering between Midge and Ben, played by Zackary Levi, who plays a sardonic yet unconventional doctor, and whose recent stint as Shazam, has kept him in a more muscular physical shape (though I’ll always remember him as goofy, lanky, Chuck on NBC).

Abe is a bit everywhere this season, his pride tied with Bell labs and his teaching career go in a surprising direction. It’s a fitting story about a man whom you think has everything – realizing the futility of his own choices. With subtle hints throughout the season, that maybe this isn’t the person he truly wants to be. Or maybe it’s just spite, it’s hard to tell, which makes it quite funny.

Joel is surprisingly heartwarming this year. Becoming such an underdog you’d want to root for, it’s sort of touching how he wants to fix his mistakes. How desperate he is for forgiveness – yet also, mature he is in taking responsibility. He also takes on a surprising new role I didn’t see coming – a career choice, that weirdly, teaches him how to be the man he should have been. As he becomes a sort of hero to everyone in his family, especially Midge, which is very surprising.

We are also given some funny side stories with Rose Weismann (Marin Hinkle) and Susie (Alex Borstein).

Rose is surprisingly tasteful – her knowledge of art and culture is astute, but what’s even funnier/incredible, is when taken out of the role we’ve established for her character… She’s surprisingly sane. Wise, even. She knows how to make friends and is a much better mom than we’d ever given her credit for, which shows in this season.

As for Susie, she definitely has some of the funniest lines and bits this year. But we also see how much of a tough girl she is. Especially, in comparison to Maisel’s sort of luxury living. We also get more of her backstory, and realize quickly, she’s a tough girl from the city who knows how to get things done.

This season also upends the setting a little: some of the first few episodes partially take place in Paris, and the middle of the season, takes place mostly in the Catskill mountains of NY. We also get a broader look at the Jewish culture of NYC and move beyond the local club scene, as well as get a chance to gander some of the bigger possible venues for Stand-Ups.

You can Watch Every Episode of The Marvelous Mrs. Maisel on Amazon Prime Video