‘The Martian’ Review: Surviving on Mars

MoviesMovie Reviews
October 2, 2015
By: Will Fan

Most survival stories present a stranded hero who manages to persevere through a mix of strength, mental fortitude, and luck. While certainly all of these elements are present in The Martian, the real showcase here is for human ingenuity and problem solving. Astronaut Mark Watney is presumed dead after being struck by debris and swept away during an emergency evacuation in a dust storm on the surface of Mars. Alone on the red planet with nothing but the mission supplies already in place, he must devise a plan to somehow survive until the next mission can rescue him (which is four years away).

The Martian is an adaptation of a self-published novel by Andy Weir–a novel so steeped in the technical nitty gritty that it occasionally reads more like an engineering thought exercise. So extreme are Watney’s circumstances that he has no choice but to “science the shit” out of every problem he faces. The crew’s waste is collected and mixed into the martian soil in order to grow potatoes to stretch his food supply, hydrazine fuel is carefully combusted to generate water vapor to water the crops, and a clever retrofit allows Mark to finally reestablish communications with NASA. The film manages to faithfully adapt a great deal of the novel’s extremely rigorous science without getting bogged down with every technical detail of Mark’s countless problems or clever solutions. 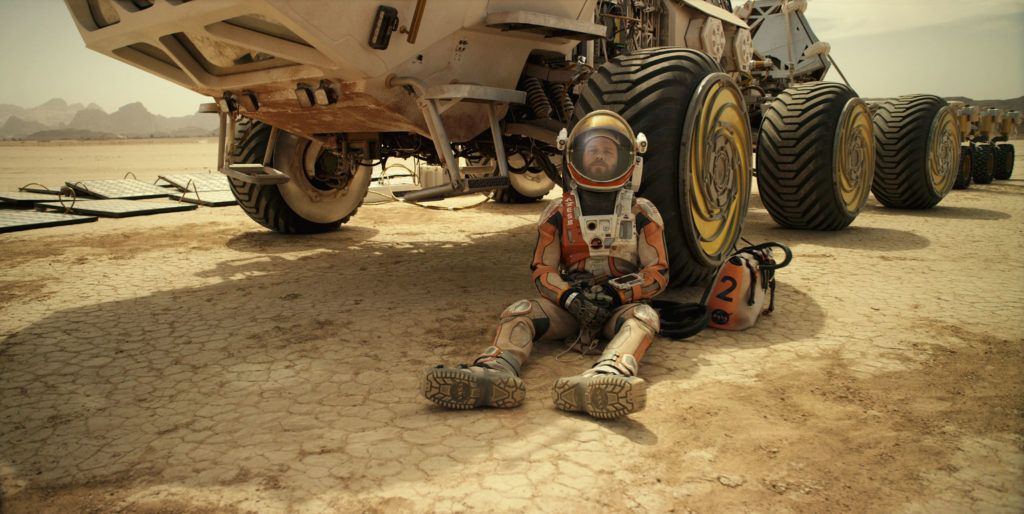 While The Martian could easily stand on its scientific rigor alone, it also organically captures the tension and emotion of such a harrowing ordeal. The film doesn’t linger on emotional anguish or the mental toll of isolation and near-certain death, which are the common focus of such films (see: Gravity, Cast Away). These arise naturally from the incredibly bleak odds Mark faces on the surface of a hostile planet, but Matt Damon reveals these moments only sparingly, a constant reminder that Mark Watney is ultimately an extremely capable astronaut, engineer, and botanist (NASA doesn’t send just anyone out to space, you know). This applies to nearly everyone in the film, particularly the beleaguered director of NASA Teddy Sanders (Jeff Daniels) and Mark’s guilt-ridden commander Melissa Lewis (Jessica Chastain). There’s no melodrama here–only a difficult situation and a problem to solve.

Ridley Scott and screenwriter Drew Goddard streamlined the source material while preserving the elements that made the original novel such a runaway success: the celebration of humanity’s ingenuity and compassion. The entire world is captivated by Mark’s ordeal and everyone scrambles to find a way to bring him back home. In many ways, it’s a geek fantasy scenario where the entire world rallies together to solve a problem and NASA has infinite funding, but it’s hard not to get caught up in the film’s cheerleading regardless.