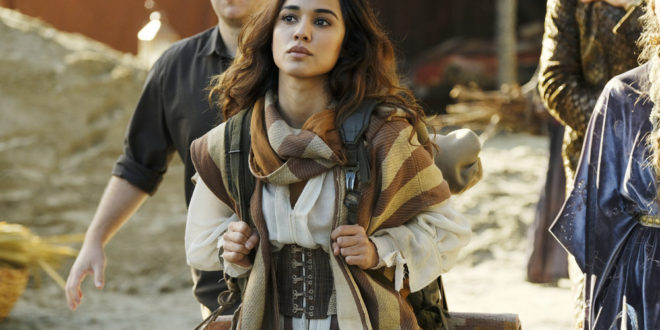 In this week’s episode of The Magicians we meet the god Angus, The Monster remembers he had a sister, Zelda is confronted with some hard evidence, and Margo’s journey leads her to free nomadic women in the south.

Margo’s Quest For the Ice Axes

Margo has made her way to the southern part of Fillory where she searches for the Foremost and his tribe of nomads in hopes to getting the magical ice axes that are supposed to be able to repel demonic possession. The journey there is a long and difficult one and as the magician goes through her limited water supply, she is forced to lick a single bead of water from her birthright iguana in desperation. That’s when things get super trippy. She begins to see Eliot there singing to her and she comes to realize that she must be high from whatever ingredient was in that lizard bead of sweat she ingested.

However, after fainting from dehydration, she is found by the southern nomads! They see her mark of banishment from Fillory and is taken into one of their tents to rest. When Margo wakes up, she meets one of the nomadic women who appears to be one of their elders. This individual explains that the red sand they have trapped are actually demonic spirits who come whenever a woman had any heightened emotions. The spirit would then possess someone, causing paralysis and even death, but then the Foremost with his ice axes would be able to exorcise the entity out. Margo listens to all of this with raised eyebrows because of the other woman’s comment on how lucky they were to have men around to protect them. A commotion is suddenly heard outside where we witness an argument between a married couple after the man is caught cheating with his wife’s sister and he had the balls to be mad at her. Red moving sand quickly arrives and jumps into the body of the dude and the Foremost comes out and axes him. Then the elder woman traps the red spirit into the bottle as soon as it leaves the unconscious male.

Margo eventually makes her way to the Foremost’s tent where she seduces and sleeps with him, although we learn that the Eliot she is seeing is a manifestation of her conscience and we discover more of Margo’s background through him. Even Josh is projected out before she’s about to get busy and he asks her if she really wants to do this. But she’s determined that she needs to do this in order to save Eliot. The following morning however, the Foremost tells her that the magical objects are enchanted only to work for him but she could collect black grains of sand out in the desert that could then be forged into axes for her. He obviously doesn’t think she can do it because of the demonic spirits that plague women. Margo is confident however and says she’ll be back. Singularly focused, she goes off on her own to collect the tiny black specs. After many hours of digging, Margo talks to the fictitious Eliot inside her tent, exhausted and angry AF. We find out how her father treated her like his special princess until she grew up and he realized he couldn’t control her. Then she tells her conscience that the only thing she ever did right in her entire life is be Eliot’s best friend and now she isn’t even doing that correctly because she can’t manage to fill the small canvas bucket with enough black sand. Her rage and frustration boil over and she screams in agony. The red sand though starts to come inside her tent but then recedes. Margo goes outside and finds the spirit of a woman who mentally communicates with her. The ex-high king of Fillory asks why the other being torments other women as female entity herself and she gets an answer. The next day she returns to the southern nomads’ camp with her bucket of black sand. Margo is ready to get to forging the axe with the raw material when the Foremost and the elder lady just laugh at her. They tell her that she should be proud because no woman has ever accomplished what she has although they no intention of ever helping her. Margo then reveals that she spoke to the spirit and it turns out that they are there to help any woman who angry, hurt, or in pain, but they already knew that and had been telling their people lies to control them. Well that stops now. Margo uses battle magic to knock out the Foremost and the elder woman then frees the trapped spirits. She then takes the axes and prompts the creatures to attack the douchebag men in the camp. Lastly the magician tells the women that the spirits work for them now and they can ask them to do anything. After freeing the controlled from their bonds, Margo takes the ice axes and heads out with the entire main cast singing with her. It’s such a powerful moment.

Alice and Kady Talk to Zelda

Meanwhile back at the Neitherlands branch of the Library, Zelda goes up to Everett and asks if they’ve found the leader of the Serpent group yet. He says no but they are continuing to look into it and that Phyllis is in charge of that investigation. She offers her services and that she might be able to help think of other places to look given her background. Her mentor says her offer is very generous but she has enough on her plate. Kady and Alice must have then invited the librarian to the apartment to show her what they’ve discovered regarding ambient magic output levels. The elder magician says that these reports are published weekly, but the duo explain that they put a tracer into the pipeline to discover the truth. Alice says that once they saw the real levels of magic in the system she thought they should tell Zelda because she didn’t think the older woman signed up for an organization that lies. However, Zelda is defensive and says that she’s sure there’s a valid explanation. Kady interjects that there is, Harriet told both of them that Everett is trying to squeeze out Hedges. Alice adds that the librarian is on the inside and can find out what they’re doing with the extra magic, why they’re hoarding it, and why the Library is lying.

The Monster Remembers He Had a Sister

After Penny 23 wakes up from his trip into The Monster’s mind, he tells Julia and Quentin that the creature isn’t trying to build a body for himself but for his sister. If he was the one who got imprisoned and the she got chopped up, she must be even worse than her brother. So the girl on the altar that The Monster thought was a sacrifice was actually his sibling. Meanwhile said powerful entity is drawn to a bar that smells like death. He chats with a woman who is clearly not having a good day. She proceeds to tell him that she’ll talk to him if he buys her a drink. He does and eventually she explains that she got good news that she’s only going to be sick for two maybe three more months. The Monster though is missing the underlying message that she’s got a terminal illness and only has so long to live. As she is about to leave, she cups his face in her hand and it suddenly triggers a memory for him. He tells her to do that again and he smiles saying that when she does that he remembers things. Creature Eliot realizes that she reminds him of his sister and abducts her.

Back at the apartment, Alice gives Julia the book of the binder she found in the mirror world and the two wish each other luck on their respective missions. The team is currently split up with Kady and Alice trying to help the Hedge Witches with Pete and Zelda, while Julia, Penny 23, and Quentin trying to figure out how to keep The Monster happy and save Eliot at the same time. While researching, Penny 23 says that he can’t find anything useful on Enyalius, saying that there’s information on how he looks like and what he likes to eat but nothing on how to actually find him. The traveler though remembers that the god was wearing an emerald ring in the memory, which helps Julia recall another deity. While she was doing research with the Freetraders there was a god who always worked in disguise but he was known for always wearing an emerald ring. Penny 23 then assumes that Enyalius is just a front. Jules then finds an entry in one of their books for a Celtic god named Angus. Q tells his bff though that this entity is a trickster, but she shrugs it off and says that this won’t be a summoning. Apparently though there is a whole group dedicated to entertain and protect the god, they need to find a leprechaun.

So the trio head to a shoe repair shop and have a real talk with the owner Berry. Eventually she gives in and takes them to the back room that leads to Angus. But it turns out that they need to find a way to unlock the door where the god is and everything they need is within sight. It’s designed to be an escape room that can kill you. Luckily since Julia is pretty indestructible right now, she manages to get a door knob that was placed inside a machine with blades jutting out in the opening. Finally Penny 23 finds the key to the door on top of the door frame. However, once they enter the other room it looks empty. Just kidding Angus was hiding behind his chair. The god tells them to relax and offers snacks but understandably the trio passes and wants him to run away because The Monster is coming. Angus is very blasé about it all though but eventually gives in and says that he has a secret panic room of sorts that even the creature can’t get inside. Before he goes in though he asks Julia to come with him, saying that they are very alike and he’s sure he could help her figure out what’s going on with her. She declines however and he shrugs it off. Next problem, he can’t seem to remember his password to unlock the hiding place. Soon it’s too late as The Monster arrives and rips out the last missing stone from his body. Penny 23 then teleports the three magicians out of there.

Back at the apartment Penny 23, Kady, Alice, Julia, and Q are drinking. Quentin is sitting on the stairs apart from everyone else and Jules goes to him. She says that this isn’t over and he says yes it is. The former goddess is insistent that she’s going to figure out what this binder is all about and become a deity again. However, she’s going to need him to remind her what it feels like to care about people and want to give up your life for them. Suddenly there is a knock at the door and Kady goes to open it. On the other side is Zelda who asks if she can come in.

The Magicians airs on Syfy Wednesdays at 9/8 central.

Nicole is the Features Editor for The Workprint. She may or may not be addicted to coffee, audiobooks, and sci-fi.
@niixc
Previous ‘Dumbo’ Review: Adorableness Over Substance
Next Hissing Contest: the ‘What We Do In The Shadows’ Review