The Fosters has returned for it’s third season where it seems like Callie can’t catch a break. To recap where things left off  last season, Connor was shot in the leg, and Jude and Connor officially became Jonner. Callie’s biological father finally realized it was selfish to keep Callie as his own property. Last but not least the twins and Ana (who was in labor) got into a wicked car crash, that supposedly resulted in a fatality.

The season starts off with one of my least favorite TV ploys, a dream sequence. Stef is running in slo-mo to the scene of the accident where she sees her sweet son Jesus on a gurney with his arms crossed and shoes off. Apparently being shoeless is indicative of being dead. Rest assured boys and girls, Stef awakes with a huge gasp quickly realizing  it was just a bad dream.

It has been approximately three weeks since the car accident, which incidentally killed no one, and Jesus has been shipped off to Summer School: Wrestling Edition (aka he is gone for the season). Everyone else’s summer plans involve staying on the show so don’t you worry. Brandon is going to his prestigious music camp, Callie is finally getting adopted and going to summer school and Mariana is planning on losing her virginity.

Mariana’s storyline, unsurprisingly, is the most boring of the premiere.  Her plan is to spend her summer playing wet nurse nursemaid to Ana and baby Bella, who thankfully survived the ‘fatal’ accident from last season. Ana is now forced to wear a body brace making her incapable to breastfeed, and just wants to spend quality time with Bella, without Mariana hoovering. 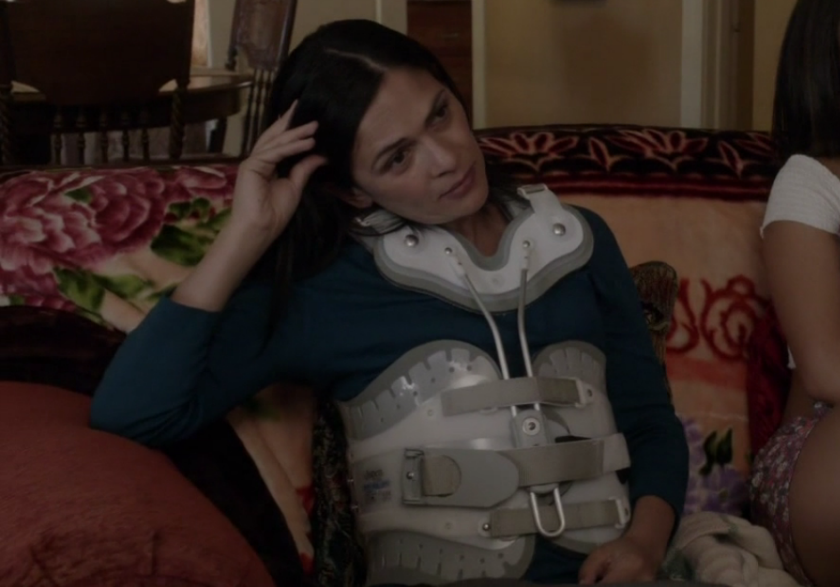 When Ana tells Mariana that she needs space, Mariana decides since she is no longer helping care for her sister, she should lose her virginity to Matt. She details her V-card plans to Callie, while sporting a hideous Fourth of July halter top a month too early.

Later that night Mariana walks Matt down to a lifeguard post to do the deed. Matt is not too keen on the idea though. He feels that the beach is too public. Matt must have learned that from April and the other doctors on Grey’s Anatomy since losing your virginity on the beach isn’t quite that sexy. Suffice to say, Mariana does not take this rejection well and stays behind at the lifeguard post to sulk. Luckily, Wyatt emerges out of the deep blue sea with a backpack of beers to comfort her. They get drunk. They have sex.

Brandon’s summer at elite band camp isn’t starting off so hot. He didn’t submit his housing application in time to Idyllwild Crest, resulting in him being the kid who has to commute. Even worse, Brandon apparently didn’t even read his acceptance letter. If he had, he would have learned he got accepted as a composer not a pianist. I am calling BS on this one, The Fosters. I do not believe that Lena and Stef could have overlooked something so big, but maybe they thought that if Brandon was mature enough to go on tour with his band, he was mature enough to know what music program he got accepted to.

When Brandon arrives for check  in, he is introduced to Katarina who may be the preppiest and most pretentious girl to grace ABCFamily (and that is saying something). She insists that Brandon “just call her Kat” though. 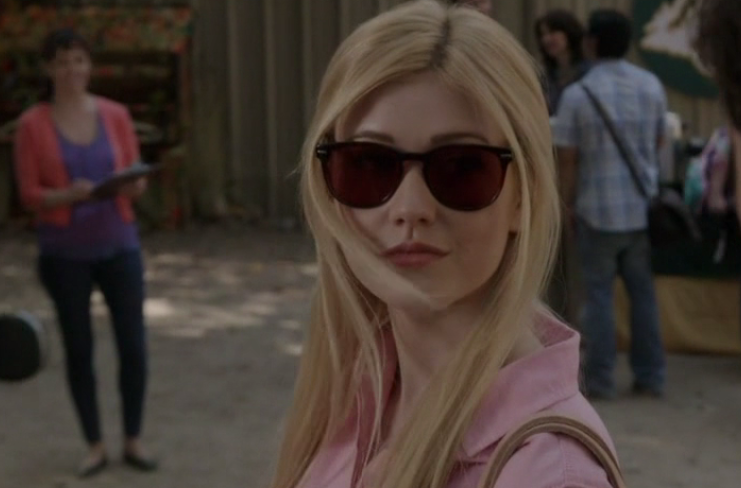 For Idylwild’s summer long project, each composer is paired with a performer. Can you guess who Brandon was paired with? If you guessed Kat, you are the lucky winner. Kat is aghast that a musician of her caliber would be paired with a commuting, first year, amateur (pronounced ama-te-your).

Oh, Stef and Lena, where do I start with you. This entire episode, these two just are not seeing eye to eye. Stef cannot stop obsessing over the twin’s car accident and the fact that the driver of the other car fled the scene. She starts off on a diatribe of the evilness one must possess to commit a hit and run and how individuals who commit such crimes are a blight on society. Lena just nods her being like “Honey I know. We all know. I am an educator and a mom. I care about kids too. But because you are so passionate about this I will smile, nod and let you do your policing.” Stef’s hardcore cop work produces no viable leads which leaves her emotionally distraught. She thought she had lost her son in that car crash, and she can’t get that notion out of her head. Finally she breaks down, her feelings floodgates break open, and she reveals to Lena all of her emotions.

Back at work, Lena is trying to figure out how to handle the fact that her super attractive boss, Monte, kissed her last season. The awkwardness between Lena and Monte is now palpable, so Monte declares to Lena “I’m straight. I was married,” and therefore the kiss was nothing. Not sure if that is a great defense Monte since Stef had both those boxes ticked when her and Lena started dating.

Meanwhile, everyone is all up in Jude’s grill about when he and Connor are going to DTR. He gets interrogated by Callie about it at breakfast. When Connor asks Jude about it in school, Jude announces they shouldn’t come out as dating since it is no one else’s business. Connor is obviously hurt. He gets over it, and the two arrive at the Summer School Beach Bash together acting so cute it hurts. They are interrupted though by a skater dude which produces this amazing dialogue:

I mean, wow, look how far Connor has come with accepting his feelings for Jude and to not feel ashamed by them. This interaction makes me so happy. He doesn’t attack the skater, he just puts him in his place. It is amazing! Jude though is upset that the news of their relationship has spread, and declares “I’m not gay,” as he runs away from Connor. Connor crutches after him confused and bewildered about what Jude is feeling and thinking. When he finds him, Jude is sitting on the beach with Joshua Radin playing in the background (as all good emotional scenes should). Jude explains that he just doesn’t want to be labeled any more, and he just wants to be Jude. He makes it clear though that he also wants to be Connor’s boyfriend (swoon). 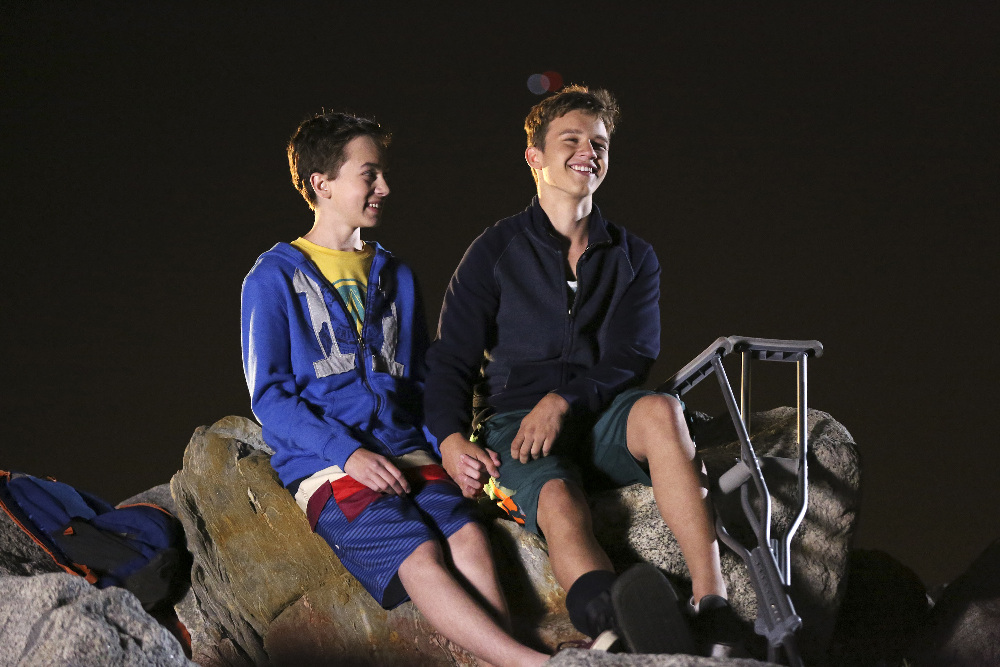 On her way to her internship, Callie gets accosted and yelled at for living a privileged life by a random guy on the street. Once she gets to the drop in center, her boss mentions that they need to spray paint chairs, and that they need to lock said spray paint up in this super secret closet, that the camera will zoom into, so no one will steal it. 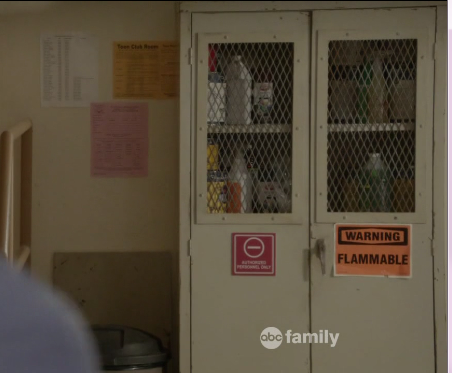 Because Callie wasn’t lucky enough to watch the Huffing episode of 7th Heaven, she is perplexed at what street value some spray paint has. About a second later, the random guy who had just harassed, Callie saunters into the center. His name is AJ and he has no place to sleep since he ran away from his foster family. Callie being her Callie-self bonds with him, learns his life story, and then bends the rules to help him; she lets him spend the night in the drop-in center (which is strictly forbidden). The next morning when Callie comes in to check in on AJ, both he and several canisters of spray paint are missing. To make things worse, her boss (who until this scene I thought was in love with Callie) walks in and fires her. Callie needed this internship if she wants to graduate on time, so if she is fired, Callie is fucked. Again. Like always.