This week’s episode shined light on the intricacies of celebrating Father’s Day in a household where each of the four kids have different fathers, one of those kids has two fathers, and the heads of the household are two lesbians.

Mariana is on a two-week winning streak of having the storyline I care about the least. Truthfully, if all of her scenes were cut out of this episode I don’t think I would have noticed. Mariana is invited to celebrate father’s day with her abuelo and the rest of her mother’s family, but she decides not to go. While aimlessly walking around San Diego, Mariana runs into her mother Ana who asks her why she isn’t as the Father’s Day soiree. Marianna literally responds “Because I am embarrassed, of being your daughter.” Damn Mariana. That is COLD. Her mom did do a lot of fucked up shit, but still. Harsh.

Ana tries to explain that Mariana is not a bad person and she should not be ashamed of her mother’s misgivings. Mariana stops Ana in her tracks and confesses that she lost her virginity to Wyatt, a boy who is not her boyfriend. Moreover, Wyatt is a boy she barely knew! Um, Mariana, that is a complete lie. Wyatt was in the hospital with you when Stef was shot, helped wash dishes with you after a family dinner at home, and he walked you home after you got wasted at a party. Lets not forget, he was your sister’s fucking BOYFRIEND! God Mariana, you are the worst. And that is the entirety of Mariana’s storyline this week.

Callie is spending her Father’s Day with her birth father Robert’s family. Robert, the man who refused to give up custody of a daughter he just met, so she could be adopted by a loving family, because he thought Callie was his property. She invites Jude along, but Jude politely declines stating “he’s not my dad” and comments that it is a bit weird that Callie is spending Father’s Day with a man she still doesn’t call dad. This prompts Jude to invite his father, Donald, to the Adams-Foster’s Father Day event. Callie flips a shit that the man who killed her mother by drunk driving will be in their house and promptly leaves.

Callie spends the day on Robert’s yacht, and to everyone’s surprise, Callie addresses Robert as “Dad.” Things get awkward though pretty much every time Callie’s sister Sophia opens her mouth. Sophia is freaking out that her parents are going to send her to a gay transversion camp in Montana, except for crazy people. She comes to this conclusion based on the fact that when she walks into a room her parents stop talking or change the topic. Sophia, if this was the criteria for being sent away to a crazy camp, I would have been sent to one twice a year. Turns out Sophia isn’t being shipped off to Montana, all of the whispering was really about her parents impending separation. 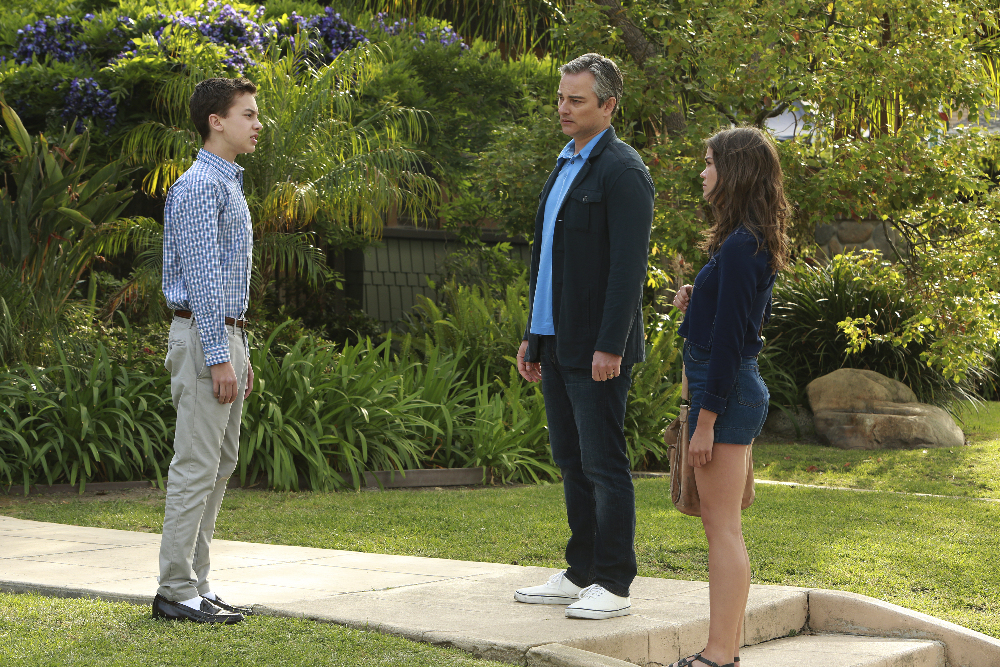 Donald arrives for dinner with a rather anemic bouquet of flowers for Lena and Stef.  Jude is so excited for his father to be there, but he is worried that the topic of his dad being in prison will come up. Connor and his dad, Adam,  come to the Adams-Foster household for Father’s Day (don’t ask why, just roll with it). He tells his father that Jude doesn’t want his father to know he is gay. They all go to the backyard, and have a Very Awkwardly Special Father’s Day dinner (hosted by two lesbians). While Connor’s dad semi-interrogates Donald about his prior work experience, the entire table is trying to ensure Donald’s past does not emerge. Just as the conversation is about to get super awkward, Brandon saves the day by walking into the Father’s Day brunch looking like absolute shit.

After the meal, Connor’s dad helps Lena bring in the dirty dishes. He then proceeds to explain to Lena, the lesbian mother principle, that after consulting LGBT experts, it is in Connor’s best interest to never come out.

In the nicest and kindest way possible, Lena lets Connor’s dad know that his son’s gay cat is out of the bag. Adam storms out,  upset about his son’s outing. Stef, confused by his anger, asks him why it matters who outed the boys. And just like last week, the awesomeness of the Jonnor storyline makes up for whatever that Mariana storyline was, producing this dialogue:

Adam: Cause I happen to care about what people think. Okay?

Donald: About you or your son? Seems like its his business, who knows.

Adam: What, you want your son being bullied too?

Donald: No. I want my son to be proud of who he is. And getting bullied at home is worse than anything he’s gonna face out in the world.

And with that, Donald pullls ahead for the best dad of the episode award. While walking his father to the bus, Jude and Donald run into Robert and Callie. Donald tries to engage his daughter in a conversation, but Callie will not bite. With his head hung low, Donald concedes, and heads to the bus. Jude is furious with Callie; probably the angriest that he has ever been on the show. He lays into Callie that the man she keeps shitting on was the one that actually raised them, and was there for them, while Robert only came into the picture a few months ago and almost forced her to live in his castle. Oh Jude, you never disappoint.

Jude’s speech combined with Robert confessing that he cheated on his wife and is a horrible person, gave Callie the push she needed chase after Donald and catch him before boarding his bus. 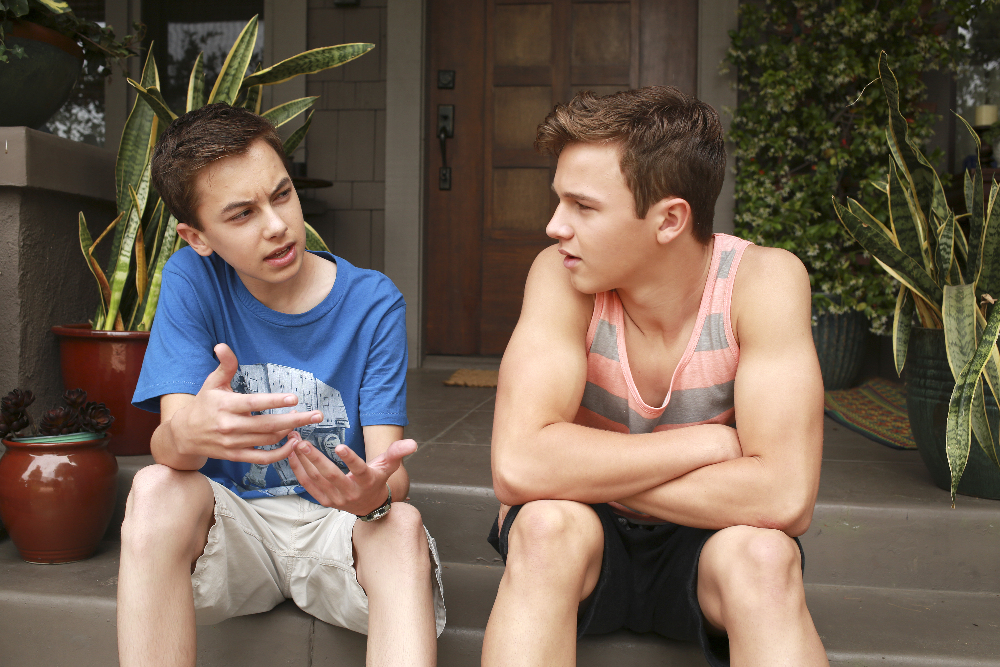 Brandon’s storyline this season is so entertaining. I may only like it though because of my hatred for all things Kat. Over at Idyllwild, Kat’s face tells you all you need to know about her feelings on the piece Brandon wrote.

She decides to verbalize them to Brandon anyway:

Kat “Your melodies are anemic, your rhythmic statements are mundane and your intervals are reductive. The whole piece is utterly jejune.”

Oh Kat, I don’t think I could possible hate you more. But wait.

Other composer boy (who I will refer to as Doucheface Composer)  tells Brandon to come to a party because Brandon needs to “chillax.” He offers Brandon a floor to crash on so he doesn’t have to wake up at the “crack of ass” but there is “one condish.”  Brandon needs to come for just one beer (is there even such a thing).

Drunk music camp parties seem AWESOME. Brandon gets there and Kat invites him for Tequilla shots. The two get sauced (at least Brandon does) and play some drunken chopsticks. The only thing that would have made this night better is if someone slipped him a pot brownie again! Kat starts spewing some BS about how she needs to love Brandon (“I need to love you”) in order to make their music. She also throws caution to the wind and says screw early morning practice, they should sleep in! Well that was all a play. Brandon wakes up late to a bunch of yelling texts from Kat. He gets there and she is ranting about how lazy Brandon is and how he doesn’t care about this project. She tells the teacher that she wants Doucheface to be her composer and then slyly asks Brandon what was he doing last night that was so important he wasn’t preparing.  I still don’t get why he didn’t call her out for being at the party too.

AJ (the kid who got Callie fired last week) is arrested for tagging buildings with the stolen spray paint. Callie gets Stef to help AJ out which results in Mike becoming AJ’s new foster dad.