On this week’s episode of The Fosters,  “Going South,” Lena and Stef are in for a no good, very bad Saturday.

Stef and Lena’s Saturday begins before the sun has a chance to rise with a contractor knocking on their door. Stef hired a contractor to fix their bathroom without telling Lena which turns out to be a big deal because Lena wanted to get at least 15 more quotes before hiring one. A furious Lena storms upstairs while Stef is delegated to clean the backyard which has been ransacked by the friendly neighborhood racoon. While picking up the trash, Stef finds an empty pregnancy test box. She bolts upstairs to show Lena her discovery, but before she can finish a sentence, Lena blurts “we need to go to therapy.” I actually agree with Lena here.  These two need to actually communicate. I don’t even think that the two are on the same page about what they are arguing about, so nothing is getting resolved. Stef deals with issues by taking action first and processing later while Lena needs the discussion before the action. When Stef tries to express her frustration about Lena’s process of choosing a contractor, Lena interprets it as an accusation. It is at the point that no matter what one party says, the other will take offense. So, yes, I think therapy couldn’t hurt.  They bench this argument for the time being though, so they can address the more pressing issue… a potentially pregnant daughter.

Lena is first at bat. Since Mariana is alone in her room, Lena takes this opportunity to ask her daughter how her romantic life is going. Mariana reveals that she broke up with Matt so that he can live the rocker lifestyle and bang a bunch of groupies, leaving out the part about her sleeping with Wyatt.

Lena and Stef move on to the next possible pregnancy suspect, Callie. Mariana told them that Callie was in the library, but then why is her phone off? No one actually turns their phone off in the library so where could she possible be?!?  Stef calls for Mariana and she finally spills the beans. Callie is in Mexico with Brandon. This information does very little to calm Stef down. Instead it leads her to believe that Callie is pregnant with Brandon’s child and the two went to Mexico for an abortion. Little does Stef know that Callie is only in lust for one of her foster brothers, and his name is not Brandon. Just as Lena and Stef begin to spiral into a full anxiety wormhole, Mariana comes down to confess. She admits that no, the pregnancy test was not Callie’s, she did not sleep with Matt, but she did sleep with Wyatt, and yes the pee stick box is hers.

Mariana faces a well deserved inquisition about losing her virginity to her sister’s ex-boyfriend on a public beach and storms off yelling: “Well no one’s pregnant, can’t you just be happy about that?” Mariana, you need to raise your standards of what should constitute happiness. Lena feels that Stef was too hard on Mariana. When the couple goes to console their daughter, Lena utters maybe my favorite line a mom has said to her daughter on TV: “We just want you to love yourself as much as we love you.”

Before leaving for the day the contractor pulls Stef aside to renegotiate their payment plan. He tells her that from his experience, couples that split up tend to not pay him. You know that there is something wrong with your marriage when the plumber can sense trouble in your marriage. Stef is shaken up by this encounter, and concedes to the idea of attending therapy, because being stubborn is not worth losing her wife. 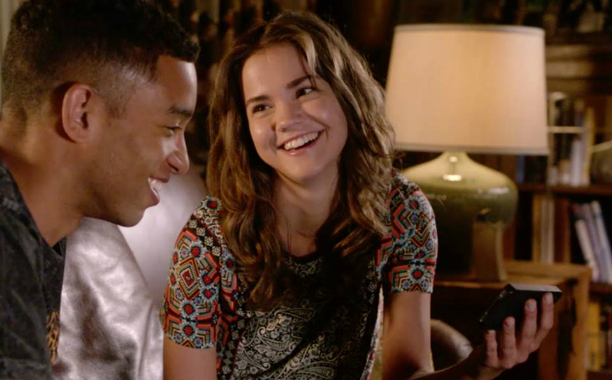 Meanwhile at the asscrack of dawn Callie wakes Brandon up for an impromptu road trip to Mexico to go hang gliding. You know a normal Saturday. The pair arrive at a sketchy hang gliding facility, and go through an intensive training, teaching them all of the required safety protocols. Just kidding, all they do is strap those bad boys on and, for approximately two seconds, practice moving left and right while holding onto a picnic table. They are now 100 percent prepared to jump off that cliff.  As if this scenario could not get sketchier, the Mexican police raid the completely legal hang gliding operation. Brandon and Callie decide to jump of the cliff to evade the cops, but as soon as they land, the cops are waiting for them. Since Callie did not think to bring any cash with her for this road trip, Brandon is forced to hand his keyboard to the cops so the two do not end up in a Mexican jail.

While approaching Border Patrol, these two geniuses realize that they need a passport to get back into the country. Oh. My. God! OF COURSE you need a passport to cross the Mexican/USA border! How do you neither of you know this? I am dumbfounded at their stupidity. Brandon blames Callie for the whole mess, and even says life was easier before she entered his life. Callie has had enough of Brandon’s self-pity, the world is against me crap, and calls him out on all of it. She tells him the world doesn’t revolve around him, and that everything from having a restraining order taken out against him to getting caught selling fake IDs is due to his poor decisions and no one elses. Thank you Callie for finally telling Brandon what many viewers have wanted to say since the show aired. Brandon and Callie get back into the Mini Cooper and because they are white and middle class are able to cross the border without a passport by playing stupid.

Mike and AJ head to the nursing home to visit AJ’s ailing grandmother, his only real family besides his brother. After leaving the nursing home, Mike gets a call on his radio and brings AJ on a ride-along to a crime scene, and tells AJ to stay in the car. As has been proved by every episode of Chuck, whenever a character is told to stay in the car, they never do. When AJ gets out of the car to see what is going on inside, a police officer tackles him to the ground screaming at him to put his head down. AJ tries to explain that he is with Mike, but the cop is convinced he is the attacker’s accomplice. Not until Mike comes outside does this douchebag cop release AJ, and Mike forces his colleague to apologize to AJ. When they get back to Mike’s apartment for dinner, Mike makes sure that AJ knows that he is in this for the long haul, and that he will always be on AJ’s side, in a manner that was very similar to Good Will Hunting’s “It’s not your fault” scene.

The episode ends with a adorable AJ and Callie scene that makes me love AJ so much. I am so impressed in the way the writers of The Foster’s have humanized AJ. In the beginning of the season, I did not like him at all. When he interacts with Callie, he shows her a softer side. He jokes with her, and expresses his feeling towards her. Callie has ten times more chemistry with AJ then she had with either Wyatt or Brandon.

Quote of the Episode:

Stef: So he was just backup sex?