We rank the best and worst of Love, Death, and Robot’s Season 3 including that NFT.

Last Friday marked the epic return of Netflix’s unique animated hit series Love, Death, and Robots. Years ago, I reviewed the first season of the animated series, remarking on how, much like the Heavy Metal comics series and subsequent movies that inspired it, ‘Love, Death, and Robots’ felt an awful lot like a pubescent boy’s artful fantasy. A token meant for an Adult Swim generation, and really, anyone who enjoys a lot of excess and style.

Award-winning director Alberto Mielgo also makes his return, whose work on ‘Spider-Man: Into The Spider-Verse’ was well-renown. His volume one’s short on Love, Death, and Robots “The Witness”, was rated in high praise for their Emmy-award winning season.

Overall, the series continues to break ground in showing off the possibilities of animation. This season also hits the story beats really well. Some episodes are tragic. And some… are just outright stupid. That said, there is a little something for everyone in Volume 3, which is why we ranked every episode, including, the surprise series drop of an NFT.

10. The QR Codes That Lead To A Surprise NFT 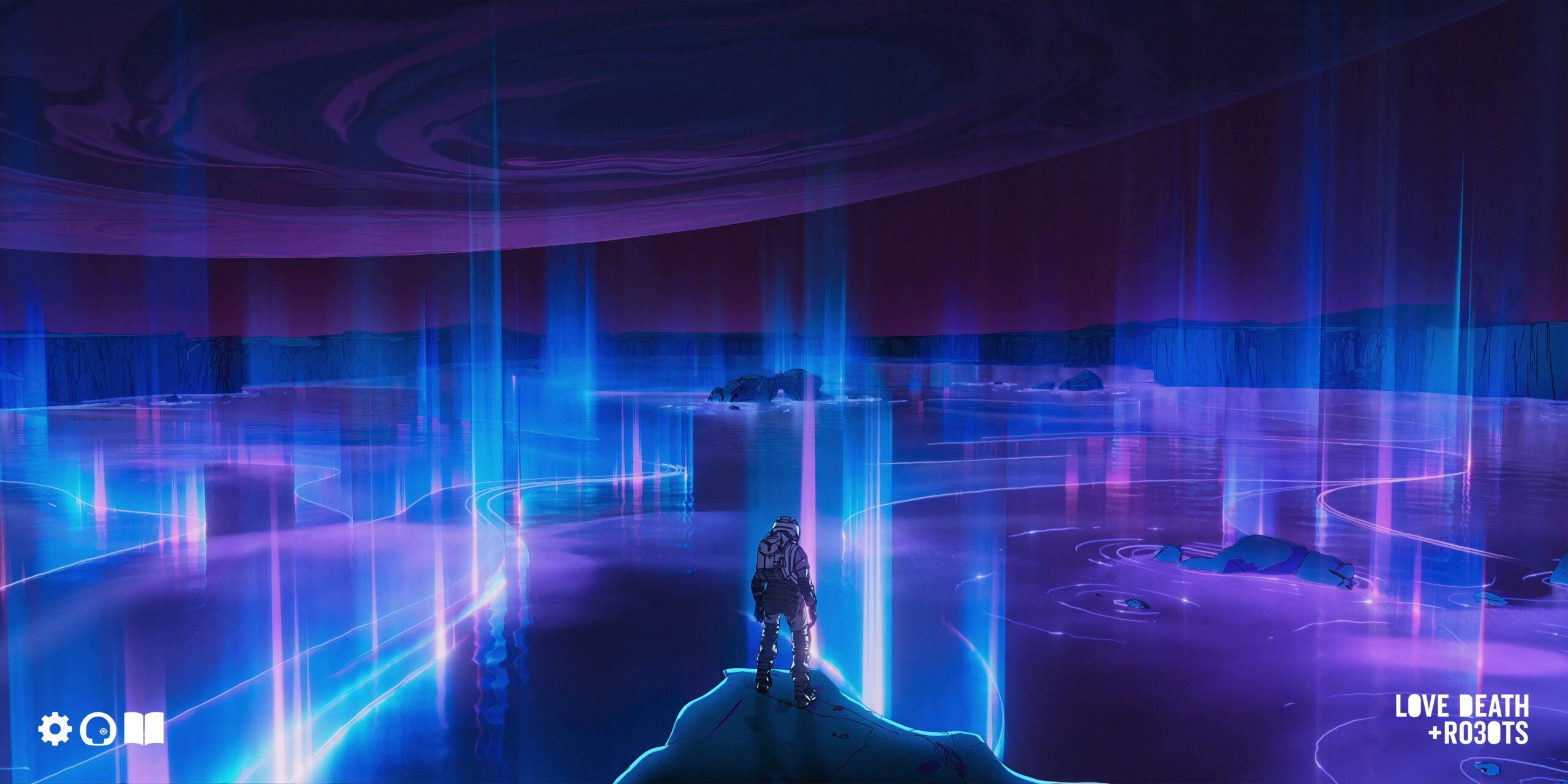 Yep, even Netflix is forraying into NFTs. There is a QR box listed in every episode, which, when combined with Love, Death, and Robot’s social media accounts, actually totals to be nine QR code puzzle. A little easter egg that, once scanned, can be converted to a minted NFTs so long as a user has an OpenSea account with a MetaMask or Coinbase wallet. I’m including this on here because though it really wasn’t necessary, it did make for an in-show scavenger hunt that was worth at least worth mentioning. 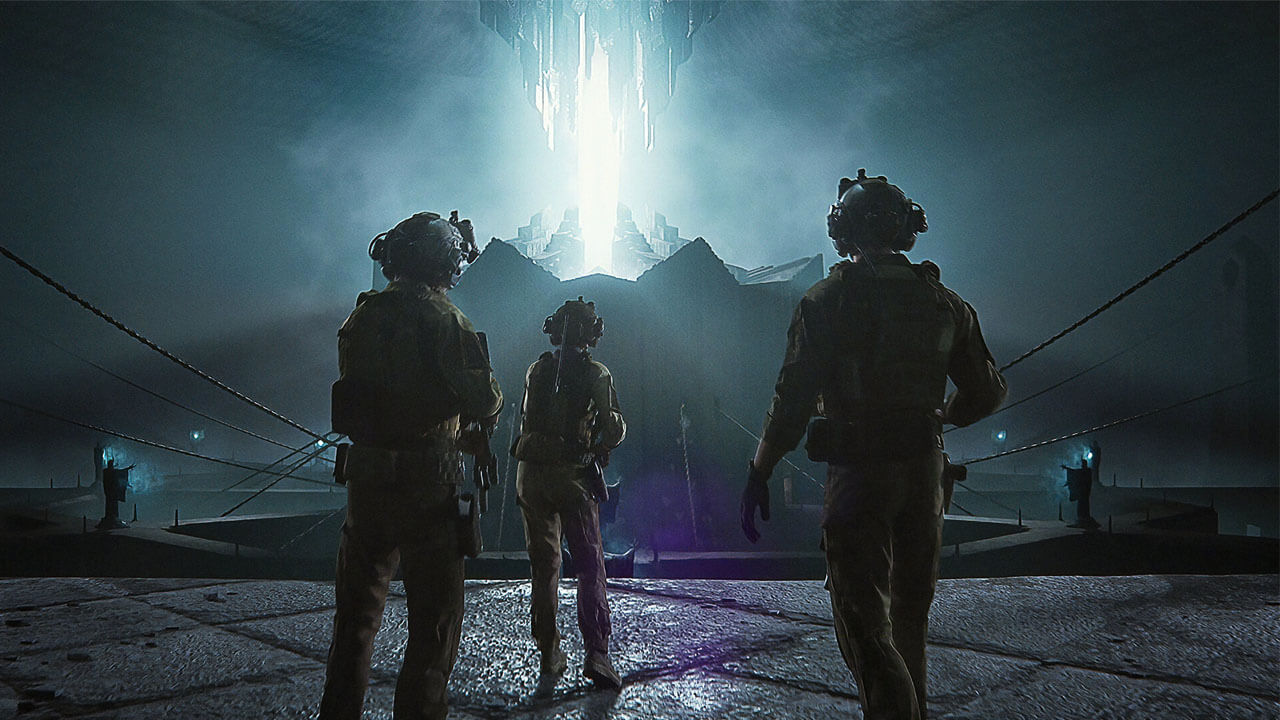 Arguably the worst episode of the season, “In Vaulted Halls Entombed” featured the grand introduction of an Eldrich Horror monster. Which sadly, may have been the best thing about the episode.

A tale of Doom where soldiers embark on a rescue mission but find themselves rather stupidly lured into the belly of the beast, much of the plot in this episode feels like something straight out of the movie Aliens or Doom. It’s a short about a failed rescue filled with pretty gruesome deaths, mysterious temples, and just a plethora of bad military tactics.

What’s arguably bad about this one: is that every character is simply reacting to an ever-worsening situation. Almost no one acts proactive, nor makes the logical decision to get out of the danger zone.

Most infuriatingly, is that despite seeing how guns don’t work well, almost every bullet is gone to waste for really no reason. The issue is that the plot really feels like it’s forcing the story conveniently forward to our Eldrich moment, rather than giving any semblance of choice for its characters. It’s worse than cliche… Because it’s forced cliche. A lot of people will disagree with me on this one, but despite Mielgo’s Volume One hit “The Witness” really going out there in terms of style, narrative, and design, “Jibaro”, unfortunately, just isn’t that innovative to me. It’s highly praised for it’s hyper-realism, to which I argue, who cares? It’s animation. This isn’t a replacement for a live-action movie.

A story-take on the siren of the lake, in Jibaro, a deaf knight is rendered immune to the siren’s call that dooms his fellow comrades. He then in turn, uses the moment to sort of exploit and take advantage of the situation. All for a metaphorical indie take on capitalism, appropriation, rape, and greed, told through interpreted music and dance.

It’s got heavy emotions and a lot of very specific camera shots and lighting. Which is good… right?

Well, no. Not really. Because it’s entirely animated like a single-camera indie film. Good for that medium, but unreasonably limiting given that this is animation. All the unique close-ups, angles, and lighting techniques, when stacked with choreography, make for a brilliant independent film. A gorgeous work of camera and editing and possibilities of real-life people.

The biggest problem I see: is that this isn’t a film! So what you’re seeing is all CGI and rendered in PreVis, like every big blockbuster-lot movie or Netflix live-action movie. So there’s no need for these tight technical shots because there isn’t an actual camera.

In fact, a lot of the possibilities of you can do in animation, really, arguably the whole reason you’re watching Love, Death, and Robots… are completely devoid in this episode.

No backgrounds. No wides. No elaborate action sequences or 3D motions utilizing angles that physically aren’t possible in film. AKA: The magic of animation isn’t here, and for those who love this episode: I think you’re confusing it for an actual film.

Instead, it utilizes a restrictive lens-technique with a less-is-more approach that doesn’t actually exist in this form. It infuriated me because why do what film already does better but on an animated medium? This is like playing the original doom on an Alienware PC. Or watching Charlie Chaplin in Imax Dolby Digital 3D. Possible, yes. Fitting? No, not really.

This one wasn’t all that bad as much as it was predictable? Swarm is about an operating hive that hosts a biologically perfect race of insectoids. A perfect genetic race, which of course, humanity then seeks to exploit for the sake of profit. You’ve got a scientist, a more exploitive scientist, and the buddings of insectoid Avatar-esque war with a science fiction twist.

Now, the episode has got some compelling characters and features two amazing cast members in Rosario Dawson and Jason Winston George. The problem? Is that it’s just really predictable. Anyone who knows of the Borg in Star Trek will see this ending from a mile away. Though the animation is really nice.

6. The Very Pulse of the Machine

This is another one that a lot of people loved but I found mediocre. Depending on how many science fiction stories you’ve consumed regarding alien encounters, the problems I found with this episode is that it’s a direct reference to the “is this real or in your head,” trope heavily used in alien encounter.

The Very Pulse of the Machine is the story about a stranded astronaut. A woman who must do whatever it takes to survive. She injects herself with various drugs built-into her spacesuit, all in order, to keep her physically going.

It’s definitely got to some beautifully colorful and very feminine hallucinations along the way. The biggest hooks of the story being the planetary acid trip visualizations. The art direction. The music.

The problem, of course, is that while that all may be visually compelling, it also may not be at all, real. Either a brilliant meta-take on planetary-level A.I. or just a really fun drug trip moments before dying, the story remains ambiguous for a reason. Which is beautiful, but also, somewhat derivative as everything you see is quite literally all-or-nothing but ends on your own interpretation.

This is the Titmouse episode. It features actors Joel McHale and Seth Green. If you’ve ever seen anything with Space Marines in science fiction, such as Starship Troopers or the video game StarCraft, you know exactly what to expect from this series: beefcakey overly-masculine marines shooting and blowing stuff up against a killer something.

Though this time, in lieu of an Alien or a Terminator, that something in this episode is a mechanically enhanced indestructible grizzly bear. There’s also a bunch of army rhetoric, CIA bases, and enough military-grade weaponry to end an alien invasion. It’s all stupid fun for some senseless violence and blood-spattering action-comedy. This is the episode that makes you go: okay. I didn’t expect that to happen. Visually, it looks like a Pixar movie about a Scottish farmer who wants to simply handle a rat problem using the latest in mechanical pest control extermination. In actuality, it is anything but.

Because what happens is sort of this brilliantly funny and slightly idiotic, cybernetic war of rat rebels-versus-machines meant for over-the-top violence. Without spoiling the ending, the series also goes in a very different direction and the genre-play here, along with the nod to pixar-styled animation, really make this one grand.

As expected, the David Fincher episode was easily one of the best of the series. It’s really captivating in a way that makes you both love and hate all the different players in its story. Most of all, this epic takes you on a short journey, which sort of like Fight Club, re-contextualizes almost everything that you see.

In Bad Traveling, a captain of a near-mutinied crew finds himself at the whims of a gigantic crab that’s come aboard and is now slowly eating his crew members. Throughout the journey, rough decisions must be made regarding duty, life, and sacrifice for the greater good. With surprising story twists and turns and a whole lot of dark suspense. If you’ve ever read Dracula, and enjoyed the bit of being stuck on a boat with a murdering monster, this is probably one you’ll enjoy too.

2. Night of the Mini Dead 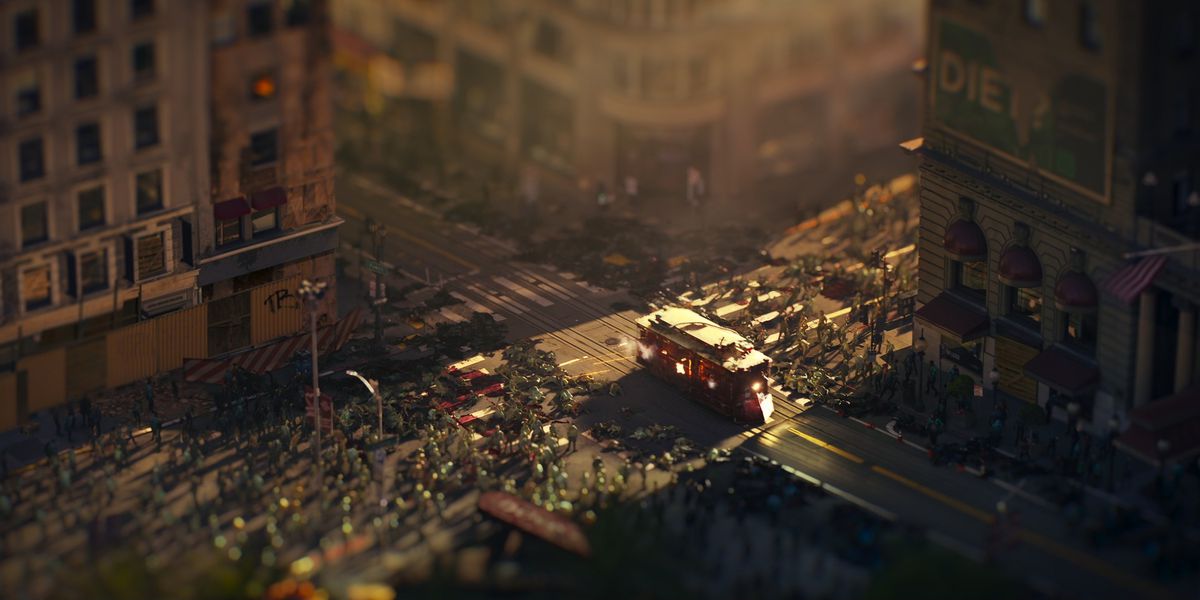 Maybe I’m biased as a gigantic zombiphile, but this was easily one of the funniest and best shorts of the series. It’s a zombie apocalypse, animated from a distance, all with very tiny miniatures, as the world is overrun by the dead in break-neck speed.

And while that sounds kind of basic, it’s because you get to see it all play out in such a macroscopic scale, and really, just laugh at humanity’s own cliched stupidity, that makes this one kind of awesome. In a simple concept that continues to escalate in fun ways. 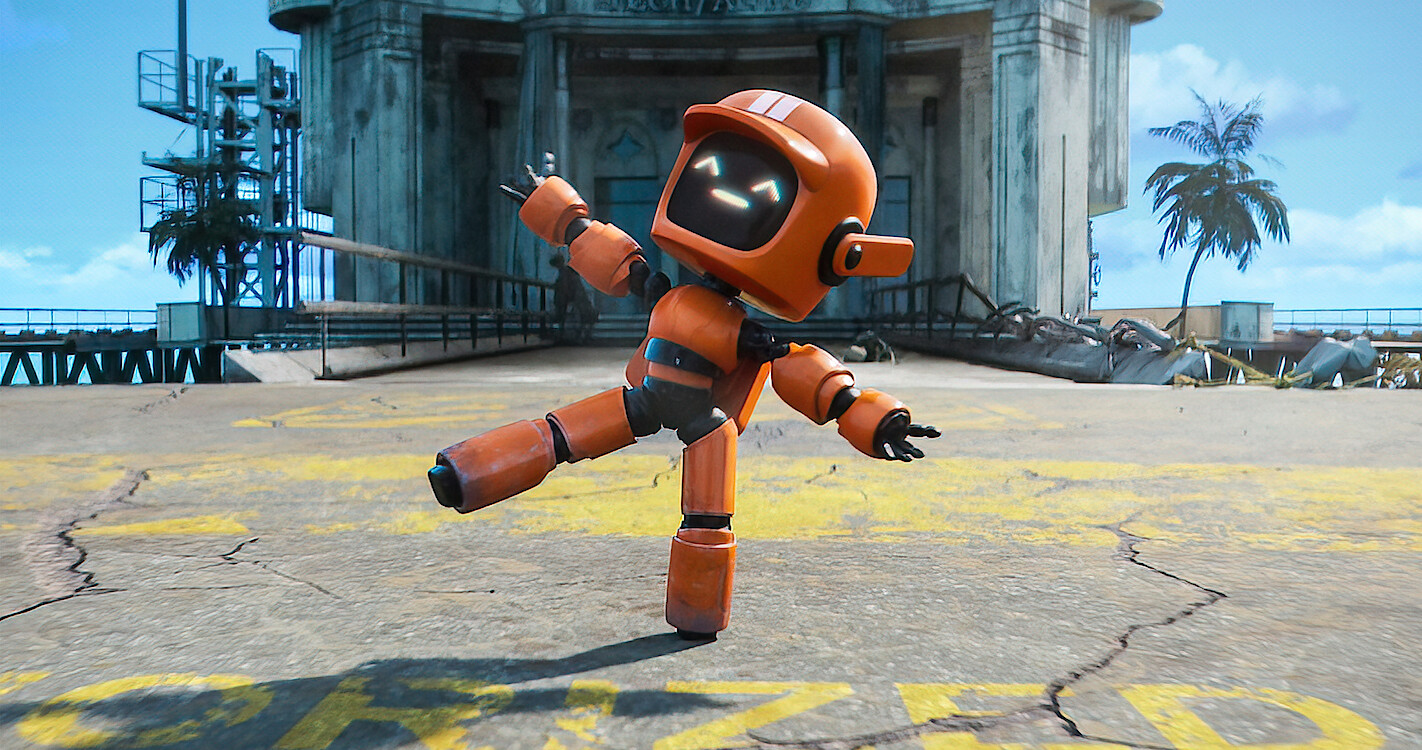 Easily the best episode this season, the first episode of this season kicks us off with the revisiting of the trio of robots seen originally in Volume One. Who continue to explore what remains of humanity after the apocalypse. Why this particular episode works is because it’s on the nose and relevant for 2022.

Whereas the first edition of this story played on apocalyptic themes in a pre-pandemic sort of universe, this one fully parodies the themes and issues we’re actually suffering from, essentially, poking fun at the very ways we as a society are killing ourselves in real-life right now.

It’s a political satire tackling issues about rampant capitalistic greed, America’s wealth inequality, Doomsday survivalist Libertarians, and my favorite: tech billionaires that used wealth to survive the first round of the apocalypse, only to realize, that they’re not very good at much of anything else.

It’s a much-needed slap in the face and exactly the kind of thematic sci-fi animation that can deliver a message, and also, entertain.