The third season of The 100 has been dividing fans all over the internet and for good reason. For a show that has always moved at a break neck pace, it feels like season three has turned up the boosters to 11. And even though it seems like we’re missing pivotal scenes (the massacre, the three month jump, and so on), I think this season has been more about exploring who these characters really are and unearthing those traits for both the plot and the fans. (And it’s been really, really good.)

I’ve already gone into detail about what I believe happened with Bellamy, elaborating on his train of thought leading up to the massacre. (And I felt vindicated in my reasoning after his scene last week with Clarke.) I’ve also talked about Jaha’s changes and his savior complex. But now I want to focus on another leader, Lexa.

Lexa inspires a significant amount of hate among fans, Skaikru, and Grounders alike. She’s weak, she’s ruthless, she’s selfish, she’s a waffle in love, blah blabbity blah. Except I’m not actually sure she’s any of those things when we look closer. In last week’s episode, “Hakeldama” she proclaims that “blood will not have blood” and this week in “Bitter Harvest” she makes good on that promise. On the surface that motto seems like a stark change from her character we’ve come to know and that some (*ahem* Titus) believe she’s acting on behalf of Clarke, but I argue that this is the Lexa we’ve always known but refused to see.

Not a character of many words, we don’t really know much about Lexa’s background. What we do know is what other characters say about her. She commands respect and loyalty from the Grounders, especially Indra, a character who is strong and powerful in her own right, a character who could fend off enemies without batting an eyelash obeys Lexa’s final word. Of all the Grounders, Indra challenges Lexa the most, questioning her decisions against the ways of the Grounders, but ultimately, she defaults to Lexa’s command because she trusts the Heda’s opinion. I have no doubt that Indra assumes the changes in Lexa are due to Clarke, but even upon first meeting Lexa we know that Indra considers her commander merciful. 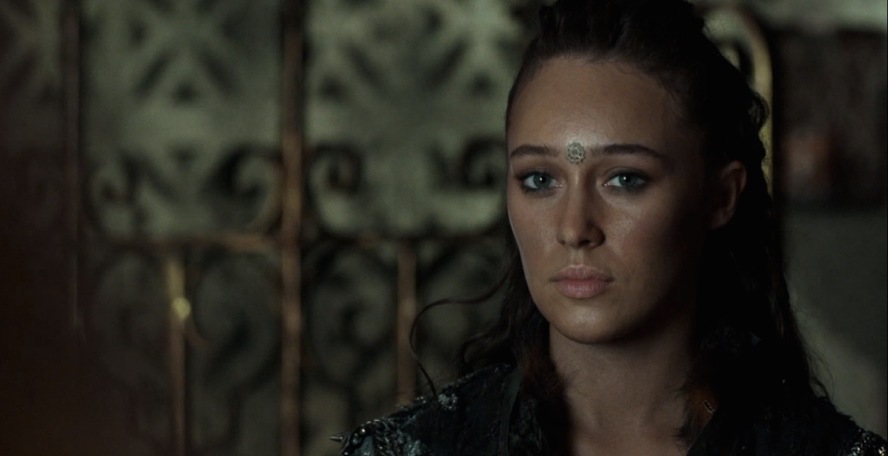 When it is believed that Skaikru tried to poison Lexa, Lexa only takes Raven to be killed when Indra admits she would have killed the lot of them. And when Lexa finds out the truth of the poisoning, in a very Ned Stark fashion, she passes the sentence and then swings the sword. Lexa could have killed all of Skaikru in that room and been done with the whole ordeal. She had all of their leadership imprisoned and could have easily sent the rest of Arkadia scattering, leaving them to Mount Weather or the wilderness, but she didn’t. Lexa realized the importance of a treaty with Skaikru for both her people and theirs.

In fact, Lexa consistently follows the notion, “sacrifice the few for the many.” Even in TonDC when it looked like she and Clarke had left hundreds to die, she wasn’t thinking of what they lost, but the hundreds and thousands more left to save in Mount Weather. In her mind, she was saving future generations from imprisonment and torture.

When Nia challenges Lexa at Polis and clamors for a vote of no confidence, Titus implores Lexa to kill the traitors and be done with the issue, but she doesn’t. Instead of killing twelve ambassadors, she decides to kill one. One, for many, even at great risk to herself, and in the end, despite protests from everyone, it works out to her advantage.

It is because of her calm and well-thought out that I see a lot of similarities between Lexa and Kane as leaders. They recognize the tradition of their people but ultimately, they also admit when tradition is not enough or when tradition goes too far. They are both open to changing their cultures for the sake of their people even when they are met with resistance, learning everything they can about their enemy and humanizing them.

Clarke, on the other hand, is not yet a leader. Lexa and Kane both see Clarke in the transitional stage between warrior and leader. Over the course of three seasons we’ve watched Clarke make the difficult decisions, watched her racked with guilt over the deaths she’s caused, the ones she’s lost. And that’s why I think that Lexa is constantly giving Clarke so much say in their actions. Sure, there’s sexual tension between the two, but Lexa is a leader, bred and born, she knows how to keep work and play separate. Instead, she sees Clarke as a younger version of herself and she helps “train” Clarke by giving her an opportunity to make the hard decisions.

You can see this relationship play out between them in “Bitter Harvest” when Lexa grants Clarke autonomy over what happens to Emerson. As Clarke agrees with Titus’ suggestion to kill Emerson, Lexa’s face drops in disappointment. Clarke still doesn’t understand what it means to make decisions outside of the moment (a lesson she and Bellamy are both learning). Clarke sees the issues as, “I don’t want my friends to die right now” whereas Lexa believes in protecting her people for their entire lives. Her role as Heda is eternal and she knows she has to make decisions that she can live with forever.