Ok, so for as much as I didn’t love season 6a (sorry Ghost Riders), I’m still hyped as anything to be back in Beacon Hills for one last ride. Teen Wolf doesn’t let me down in “Said The Spider to the Fly” because we start off with a night-time lacrosse practice! What is Teen Wolf without lacrosse (except for that time they were all on the track team for a second), and here we are with ASSISTANT COACH SCOTT MCCALL who is giving the troops hope against Finstock’s crazy wishes. I was smiling like a huge dope the entire exchange Scott and Finstock had about “Have I ever given you hope?” 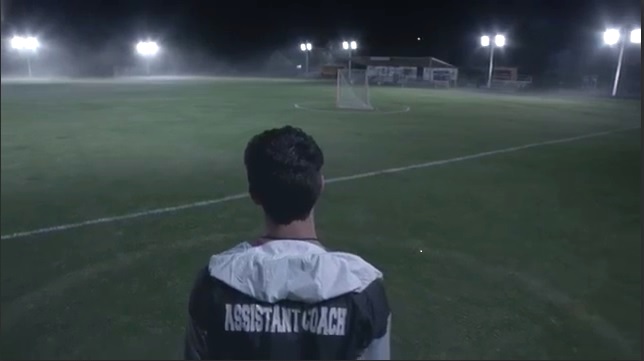 As Scott talks up how great he is on the lacrosse field, Liam is literally being dressed by Mason and Corey in the locker room. I guess Hayden moved away and now he’s too depressed to put on his own lacrosse gear. Corey manages to make him even more depressed by mentioning that he and Mason already know they’re both applying to the same college. Heart eyes emoji.

After finally getting him in his clothes and dragging him out of the locker room, Liam is only motivated by the idea that someone else is going to be named captain over him. I say someone else,  because I couldn’t name a single other person on the lacrosse team. Liam seems to be having some control issues, but luckily Scott is there to help. Since it’s season 6b, can I just say, how does anyone not know these kids are werewolves? I mean, Liam literally appears out of thin air and does about four backflips to catch that lacrosse ball. I feel like they used to try to pretend to be somewhat normal. Or am I imagining things? Honestly, I DON’T CARE BECAUSE I LOVE THIS. Let this whole season be lacrosse. Who cares!

Then of course, because this is nothing if not a show about teens and wolves, a bloody wolf wanders out of the woods and onto the lacrosse field. This is probably one of the reasons you shouldn’t have night lacrosse practice in a town where people are constantly dying from “animal attacks.” Just a thought though. This wolf is just standing on the field staring down the entire lacrosse field, and Nolan (who is Nolan? I sure as hell don’t know) is staring at it like he thinks it’s going to turn into a dude and start talking to him. Is it? Because at this point I feel like why not just let everyone know werewolves are a thing. But nope, the wolf turns around and walks back into the woods and Scott and Liam, the ASSISTANT COACH AND CAPTAIN, just abandon practice and follow this thing. No one seems to be weirded out by this at all. The pair go deep into the woods and of course find a wolf corpse with 900 spiders crawling out of it, because that’s not my worst nightmare or anything. And oh hey it’s surrounded by like 50 other dead wolves. I don’t want to point out a flaw in your logic Teen Wolf, but didn’t season 1 Stiles teach us that California doesn’t have wolves?

Speaking of Stiles, ROLL THE CREDITS. I love that the parents are still season regulars, but you know who isn’t a season regular? Special guest star Dylan O’Brien. Ouch.

Wondering what the rest of the pack is up to? Malia is lying around reading a book on France and dreaming about mysterious French men. Lydia argues that Liam needs her help because Malia is the only one who can actually relate to being an animal, but Malia’s ready to be done with all of Beacon Hills’ bullshit. 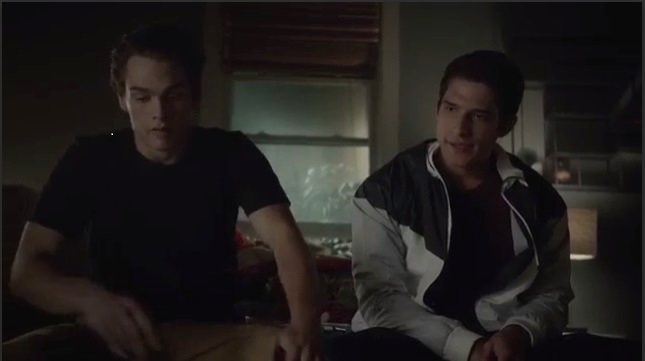 Then it’s time for father and son wolf bonding. Watching Liam try to help Scott pack for college, and Scott encouraging Liam to practice his mantra was adorable. We still don’t know why Liam is having control issues, but Scott is a great wolf dad and dammit I’m not ready for this show to be over.

Back to Eichen House, the gift that keeps on giving (aka  one of my least favorite set pieces this show continues to use). Blah blah blah, patient has been here since 1912. He’s encased in hardened volcanic ash. The idiot doctor taps on it so it breaks and BOOM, it appears we have another Hellhound. I’m a little confused because I thought Parrish was THE Hellhound, but alright, I’ll take it.

The rising seniors are all sitting down with a guidance counselor to discuss their upcoming schedules. I laughed out loud when Liam said he wants to take Latin because it’s an easy A. When has Latin ever been an easy A? I took 4 years of it, had a wonderful teacher, and STILL didn’t consider it easy. So, this guidance counselor…she’s…I mean we know she’s either going to save them all or kill them all, right? Is she a supernatural therapist? She sort of seems like Nolan’s therapist. And oh hey, it’s Nolan again. Still have no idea who this kid is but apparently he may have some knowledge of the supernatural. Also I have to get it out-of-the-way and say, boy do I wish Liam would get a haircut.

I’m not sure if school has actually started yet, but the Hellhound from Eichen House is lurking around as rats come streaming out of the vents in the school’s walls causing one random girl to scream “Why does this keep happening to our school?” Girl, how are you the first person who has asked this question??? Let’s not forget when 1 million birds committed suicide by flying into a classroom in season 3. Mason and Liam take to the sewers under the school to find out why rats are terrorizing their classmates, and Mason gives us all a lecture on how an innate fear of spiders, snakes and rats is an evolutionary advantage. This means season 6b is going to be super gross, doesn’t it? Just as I’ve asked myself that question, of COURSE they encounter a rat king. Google it if you must, I’m not describing it here. Somehow Malia hasn’t left for France yet, so Liam and Mason drag her down to the sewers to sniff some bloody rats. 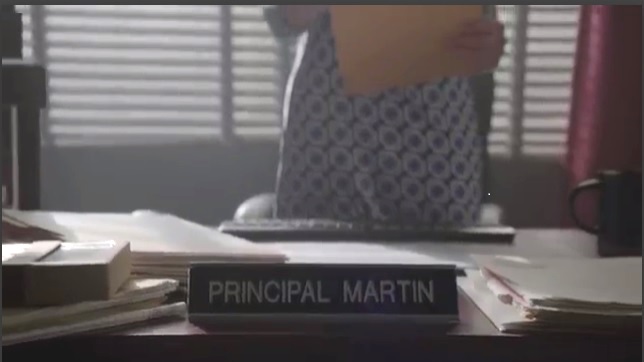 Meanwhile above ground we see PRINCIPAL MARTIN! I’m glad to see that the only person at Beacon Hills High who has ever cared about these kids getting an education seems to have been actually rewarded for doing her job well. Principal Martin wants none of Lydia’s lecture about how “if you see something, say something.” She wants her daughter to make it out of Beacon Hills alive and she doesn’t care about the rest of it.

One of my favorite things about this episode (ok, this entire series) is Melissa McCall. Melissa isn’t even fazed when Mason and Liam show up with a dead rat for her to autopsy, but instead manages to shame them for not bringing her dinner. Melissa doesn’t have time for a rat autopsy because as usual in Beacon Hills, the hospital is totally full and she has to deal with two men trying to kill each other at the front desk. Liam jumps in the middle to help, and immediately wolfs out. People see him, including the Hellhound who seemingly has been following him this entire time. 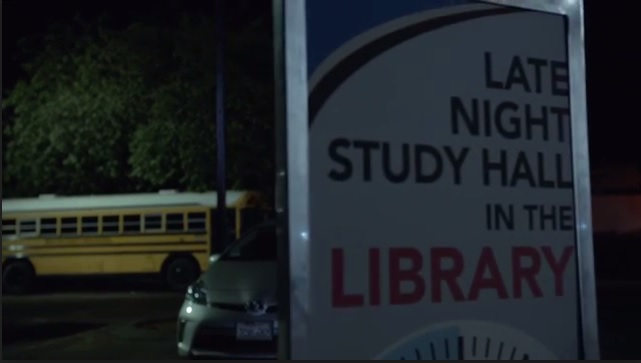 Mason and Liam go back to the high school, possibly for LATE NIGHT STUDY HALL IN THE LIBRARY as indicated by a very informative sign. Why, if there is late night study hall in the library, that the entire school is dark? The Hellhound has followed Liam to the high school, and Parrish has followed the Hellhound. You know what that means! It’s time for some hot Hellhound on Hellhound action. The Hellhound is here to stop something the pack let out, and looks at Liam as though it might be him. While Liam steps in to fight the Hellhound the new guidance counselor is out in the parking lot with a trunk full of guns. I knew something was up with her. Liam manages to win the fight, and the Hellhound realizes Liam isn’t the one he’s looking for. I’m bummed that Mason was thrown across the hallway and knocked unconscious because I feel like he would have asked some great clarifying questions about what exactly the Hellhound is looking for. Eventually, Mason and Liam limp back to the locker room and Mason gives Liam (and us) a pep-talk about how “Wounds heal, people move, things change.” Things don’t have to change Teen Wolf! Let’s stay like this forever! 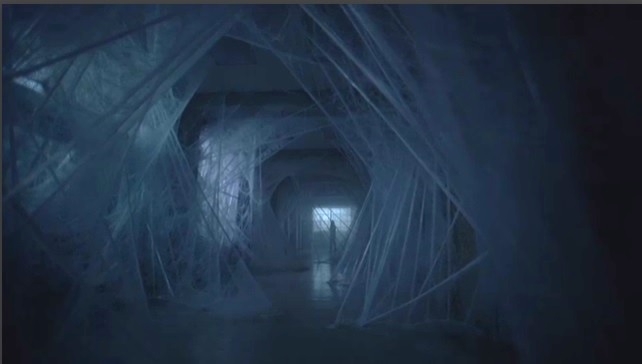 Lydia goes to Scott’s with all her suitcases because I guess they’re driving to college together, but instead has a Banshee situation. She enters a creepy spiderweb version of the high school, which let’s be honest, is basically the Upside Down. I really don’t want spiders to be a thing this season, so when the creepy voice tells Lydia “You let it out,” I’m hoping the it is not a giant spider. When she comes back from the Upside Down we see that Scott has Stiles’ Jeep!!!???!?! Stiles left a note saying ‘Be Gentle!’ I’m trying to get my emotions in check when Lydia appears in front of the car and says “We can’t leave.” They then go to ask Malia to stay in Beacon HIlls and help them instead of leaving for France. They attempt to track down the Hellhound in order to find out what he’s looking for, because apparently when they opened a portal to save Stiles, something came out with them. Scott says “There’s always a price to pay. We learned that from the Nemeton.” 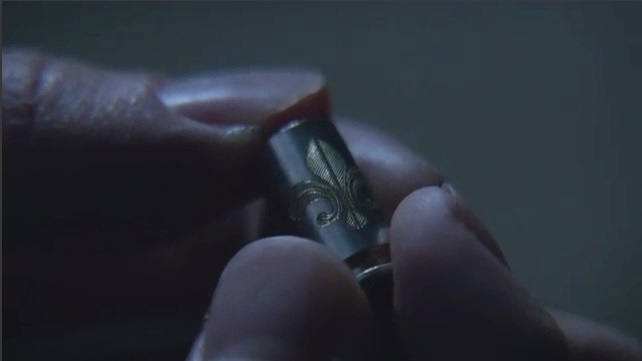 They’re too late to save the Hellhound who was also being tracked by the new murderous(?) guidance counselor. Scott picks up a bullet off the ground and I just about lost my damn mind because WE KNOW THAT SYMBOL. IS SHE AN ARGENT?

Scott, Lydia and Malia try to decide whether they should call Stiles and tell him what’s going on. Malia is in favor of calling, but both Scott and Lydia are against it. Scott plays them the adorable voicemail Stiles left for him, detailing how he’s in “THE FRICKIN’ FBI!” and then we cut to Stiles himself. 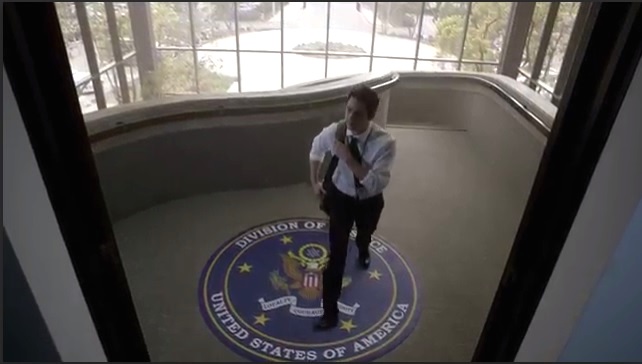 If Dylan O’Brien is just going to be a guest star for the back-end of this season, I’m not mad at the way it’s going so far. He’s in so little of this episode but manages to bring so much of the Stiles that we know and love. And then of course, of COURSE, the FBI has footage of Derek Hale running through the woods because he’s wanted for mass murder. Can’t the poor guy catch a break? I also laughed at how that footage of him running is so clearly recycled from season 1. Never change Teen Wolf. 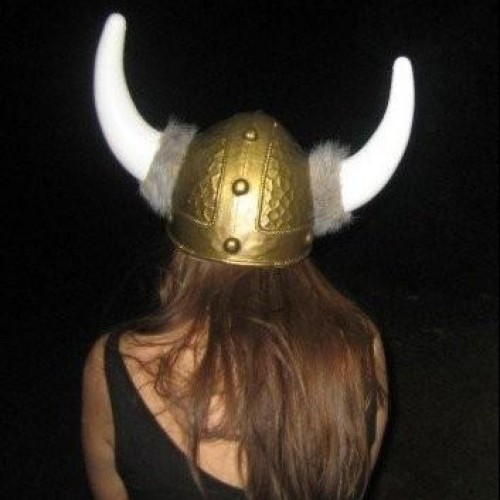