A hidden threat living among us is one of the greatest fears in the world today. Disaster can strike at any moment, from an individual or a group carrying out ulterior motives that are meant to strike terror in the hearts of humanity.

The hot button topic of terrorism is one Syfy’s latest series, Hunters, aims to tackle, but not with religious fanatics. Instead, Hunters introduces the threat of alien terrorists that are working in the shadows of the humanity with a mission unknown to planet’s inhabitants.

“It couldn’t be more timely and relevant,” executive producer Natalie Chaidez told The Workprint. “[Hunters] examines the issues that are raised by the tragic moments. Terrorists are the monsters of our time and this is a show that is about those monsters and I think that sets that show apart and gives it a lot of attention.”

Hunters follows FBI agent Flynn Carroll (Nathan Philips) whose wife Abby (Laura Gordon) is kidnapped one afternoon. As Flynn investigates his wife’s disappearance, his search brings to light a secret government agency, the Exo-Terrorism Unit (ETU), that is tracking an alien that may have kidnapped his wife. The only problem? The aliens look just like any other human.

The Workprint sat down with Natalie Chaidez to preview the first season of Hunters and what Syfy’s latest alien thriller has to offer.

The series is based off of Whitley Striber’s Alien Hunter novel. What about Stieber’s story did you find to be compelling for the television format?

Gale Anne Hurd is actually a long time fan of Whitley and she’s the one who acquired the book and I think she wanted to do something in the alien-genre again, after having done some of the classic sci-fi. I think what drew me to the book was the challenge of doing a series about aliens. I’d done superheroes with Heroes, time travel with 12 Monkeys, robots with The Sarah Connor Chronicles and it was a new challenge. Gale and I both responded to the idea of this hidden conspiracy.

Aliens have sort of taken a back seat to other supernatural creatures in recent years. What can viewers expect to see from the them in Hunters?

What Gale and I want to do is make aliens scary again. Aliens were getting a little bit neutered and audiences knew what to expect and I think Hunters is going to deliver a new, fresh alien anthology that’s scarier than aliens have been in recent years. 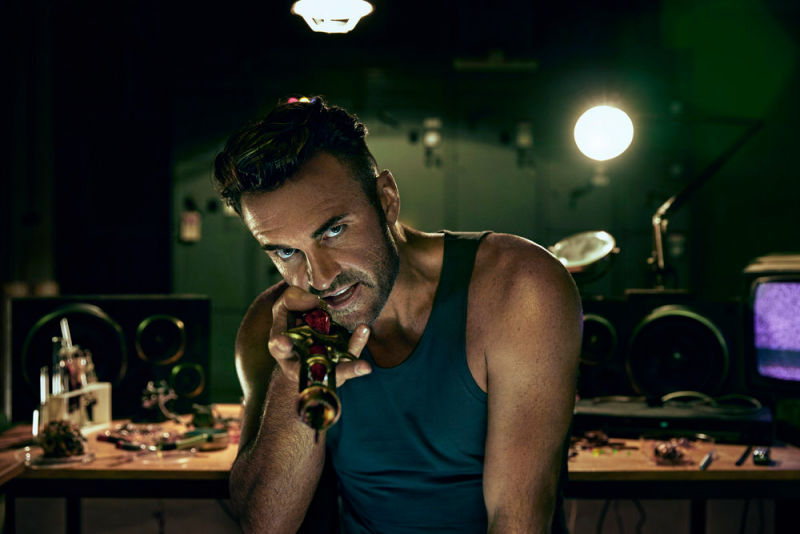 The design of the hunters is one of my favorite aspects of the show. What was the process behind bringing them to life?

I worked with a scientist named Seth Horowitz and we kind of worked from the ground up about where these creatures came from, how they would be manifested inside a human anatomy. Once we had the design, one thing that was really important to Gale and I was the implementation of practical effects. We really wanted to do things that were tactile. We found a great prosthetics producer and he built these creatures from the ground up and after he did the designs he made models in plastic and prosthetic and built them from there. It’s something I’m really really proud of on Hunters and something audiences will get to see a lot more of as the season goes.

The sounds that are made from the hunters reminded me of velociraptors from Jurassic Park. How did you approach creating the alien language?

I wanted to create an alien world that was unique. Hunters are sound-based creatures. They come from a planet where sound is their primary sense. The language when they come to Earth is like echo-location, they hear and see at the same time. My consultant and I worked together on creating this language so when you see it,  you hear it, and you hear it in these clicks that are made through the hunter anatomy. People love it and always want to try to do it. That sounds also produces a visual representation in their mind and you see that in episode one or two where Regan is learning to speak her native tongue and the sounds are also producing an image in her mind. What the language is saying and how they’re using it communicate plays a big part in season one.

Did your time on V help shape how you wanted to approach the aliens in Hunters?

One thing I took is that they used a lot of digital effects, and one of the weird things I took in was the opposite, was to lean into the practical effect. And to try to make the show feel more grounded and visceral.

V was shot with digital set extensions that made production a little bit challenging so that was one of the lessons I learned was to rely more on stuff we could see and touch and feel. Both for budget reasons and to give the show a tactile feel.

What can viewers expect from Flynn, a man searching for his missing wife and what this means for his world?

Flynn is a man whose world has been pulled from beneath his feet. His wife is gone and he is led into this world that isn’t what he believed it was so he’s our window into this secret world of the Hunters. It’s his quest to find out who his wife was, what was she doing with the hunters, did she really love him? That’s kind of a universal quest: we all want to know about that person we’re in a relationship with, what their secrets are and what the truth is about them and our relationship. Flynn is also a man with a secret, which is alluded to in the pilot with the scar that’s on his arm, he may have more to do with the hunter conspiracy than we know from the start of the show.

Moving on to the ETU, can you break down what this organization does?

The ETU is a division of Homeland Security tasked with stopping a specific group of terrorists and these terrorists, exo-terrorists they’re called, are believed to not be from earth. In the pilot we don’t know where the hunters come from, we suspect space, but we aren’t sure. The ETU is operating under the US Department of Defense, who is under the command of Jackson, a former CIA manager, they’re a highly classified operation to stop this group of terrorists.

Part of the ETU team is Regan who we learn is a hunter herself who’s working with the humans. What’s the dynamic with her working with the team? Is there a lot of tension? What caused her to work with the group?

Season 1 is really about Regan’s self-discovery. She’s a hunter who’s tasked with capturing “bad hunters.” Does that make her good? Does that make her bad? Is she hunting her own kind? Where does she belong? It’s a coming of age story for her. I actually do her origin story in 1×03, which is something that a lot of shows don’t do. I knew the audience would have those questions so I wanted to answer them and break them open, answer how she got into the ETU, and her back story.

The ETU considers the hunters as terrorists, but are there friendly versions of the hunters? What do they want as a group?

That’s the question of the show. When we open season one, all we know about these beings are the ones who are criminals, who are terrorists. They’re kidnapping, bombing, doing things to what end? We don’t know. That’s the mystery of season one. It’s not gonna be what’s expected for a bunch of alien terrorists, but are there good ones? Only bad ones? Well, you’ll have to keep watching and see.

Previous article
‘Supergirl’ is my modern-day ‘Xena: Warrior Princess’ and I’m so in love
Next article
12 Epic Moments on ‘The Magicians’ Season Finale