I’ve been playing this game called SUPERHOT and I don’t like it.

Actually, I hate it.

I’ve never loathed a game as much as I loathe SUPERHOT.

Okay, that may not be entirely true. There are definitely worse games. SUPERHOT isn’t even a bad game. In fact, it’s a pretty good game with solid controls and a decent premise: an FPS (first-person shooter) game where you control time with your movement.

But this game…does things to me. It makes me think and do things I never thought possible and for that, it must pay.

We gamers can be an angry bunch. Visit any video game forum and you’ll learn that fact quickly. We’re stereotyped as a group of fat dudes who throw their controllers at the TV over a cheating 12-year-old. Now, I won’t put myself on a pedestal and say I am not a fat dude nor am I someone who’s never raged at a video game. I’ve had my moments of frustration and screamed that something was “bullshit” or blamed a death on lag or any number of things us gamers do. But most of the time I can keep my emotions in check, turn off the game, and go about my business. (Usually by playing another, more calming game.) I’ve never broken a controller in anger or smashed a keyboard or flamed at a stranger on the internet.

But this game, this SUPERHOT, makes me want to eat a baby one leg at a time. With its mother watching, wailing in the background. 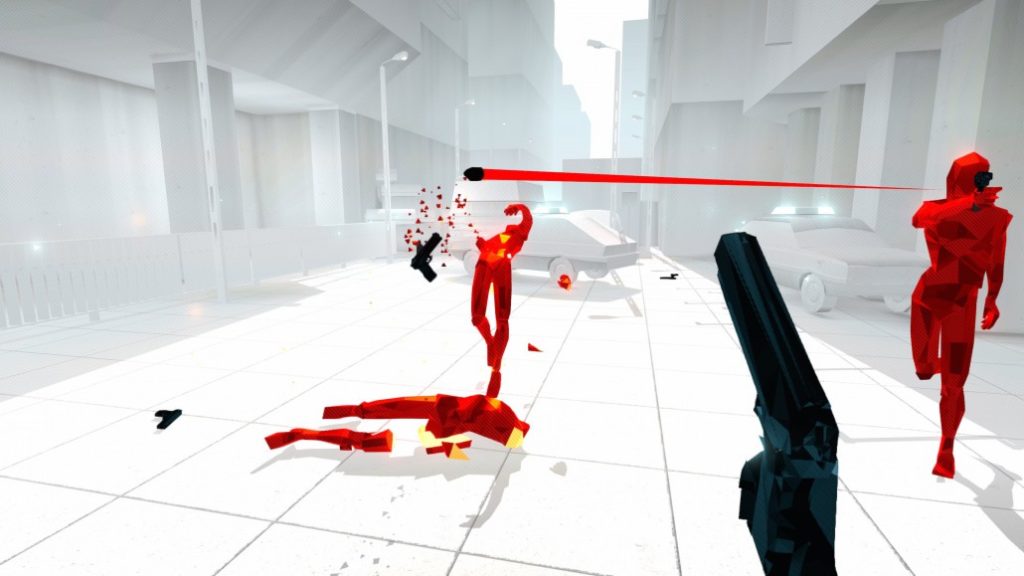 It’s such a simple game, an FPS with minimal graphics. Time only moves when you do, so you can see when enemies shoot and, theoretically, you can dodge when the bullet is rocketing toward your piehole. It’s the creator’s Matrix fantasy programmed into a game, then sectioned off into levels based on your character’s “software.” Like most FPS games, you run these levels, each one increasing in difficulty, as games are wont to do. You die, of course, but for the most part, it’s relatively easy. Sometimes, you pivot too late and there’s a dude behind you, blowing out your pixelated brains, but hey, you’re a smart gamer. You learn. Next time you turn sooner and pop him in his dumb face.

The story is pretty basic as well, you’re an office drone who’s given a program called SUPERHOT that is technically off-limits. It’s nothing too exciting and it tries too hard to be intelligent to make much of an impact. Even though the narrative is only 2.5 hours long, it feels like days, dragging on and on because if you get stuck on a level, there is no going back and leveling, no learning of more techniques. Instead, the game becomes this tedious machine of killing red guys over and over until you have memorized their patterns and become numb to your own death sequence.

And maybe that’s the point. Maybe that’s the metaphor the developers are striving toward but I hate it. I hate that after doing the same goddamn level 304 times, on the 305th time, that third dude who always has a pistol, suddenly has a shotgun and now I have to fucking start over because I have bullet holes in the shape of a Jackson Pollock covering my face.

Never, in my life, have I rage quit a game as hard as SUPERHOT. I nearly ate my keyboard on the final level. Some keys may still be missing and I’m still on edge thinking about the BULLSHIT hit box and DAMMIT that dude wasn’t supposed to be at that corner yet.

And this is from someone who plays League of Legends. For fun. 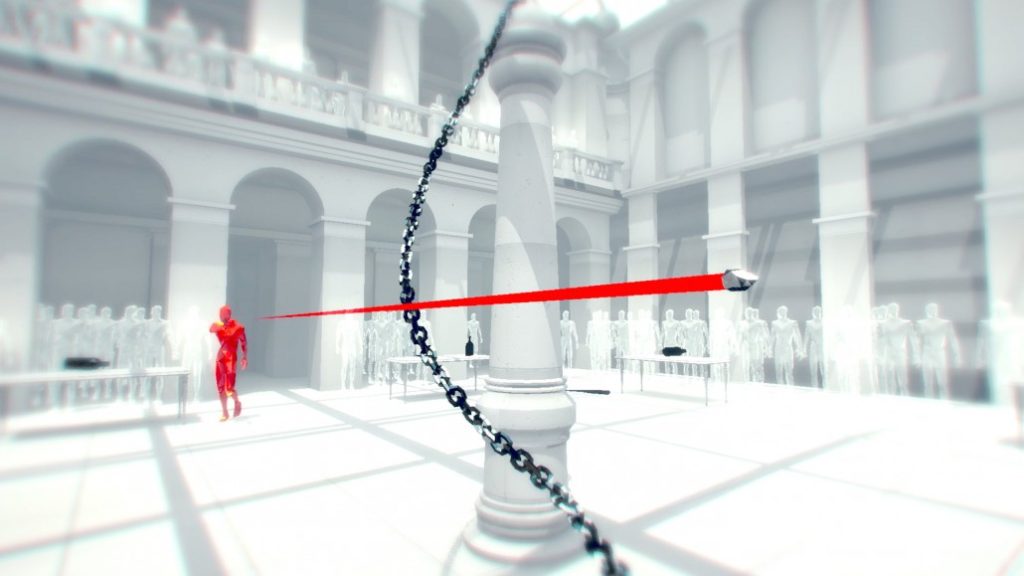 The game, for all its frustration, does have a neat concept. It’s not a concept that’s worth $25 for 3 hours of story, but a solid, well done concept, nevertheless. Once you actually beat the main story, you open up a challenge mode and an endless mode, where you test your mettle against those red dudes for even more exciting anger. The game offers the ability to upload your replays to Killstagram as a way to spread word about the game, but also to show off how awesome the game looks when you aren’t playing in slow-motion. In fact, based on my replays, you might actually think I’m good at the game (I’m not).

Look, the first hour or so of the game is good, wholesome murdering fun. You’ll feel like a rock star the way you take down faceless enemies while watching back the replay in real time. And the game handles well with its minimalist nature. I never suffered any problems with graphics and I didn’t mind the simplicity in design. However, there isn’t nearly enough content to warrant the price tag or a large chunk of my time. After beating the game I had little interest in going back to complete challenges or to give the endless mode the old college try. I did it simply for completion’s sake.

If you’re a fan of shooters, give this unique FPS a try, but maybe wait until it goes on sale to make sure you’ve got your money’s worth.

SUPERHOT was reviewed on the PC with a code supplied by the developer.