‘Supergirl’: Metallo Strikes In “The Last Children of Krypton”

This week on Supergirl: Metallo strikes, Superman and Supergirl continue to bond, Alex gets jealous, and Cadmus makes a bold move.

Spoilers through Supergirl season 2, episode 2: “The Last Children of Krypton.”

Despite the smaller budget, after two episodes, Supergirl seems to be more at home on The CW. The action sequences are much better than the ones we saw at the beginning of its freshman season and I, for one, am excited to see how this year plays out.

What has me even more excited? The departure of Superman. I know, I know. I’m a monster. Tyler Hoechlin is a lovely man who gives fans an adorkable Clark Kent with great rapport with Kara. How-to-the-ever, he’s overstayed his welcome. This is Supergirl and I selfishly want the focus back on her and her relationships. Not on Superman, a character everyone knows. Two episodes are more than enough time to portray the Kryptonians’ relationship, set the stage for more conflict, and then fly on back to Metropolis. We knew Supergirl couldn’t go forever with that whole “no-faced” Superman, so Hoechlin has done a serviceable job, but now things need to head back to the way they were. Well, kind of.

Hoechlin is pretty great at comedy though, especially this little gem of a line early on in “The Last Children of Krypton”:

Superman: “See, now, if the bullets don’t work, why the punching? Never understood that.” 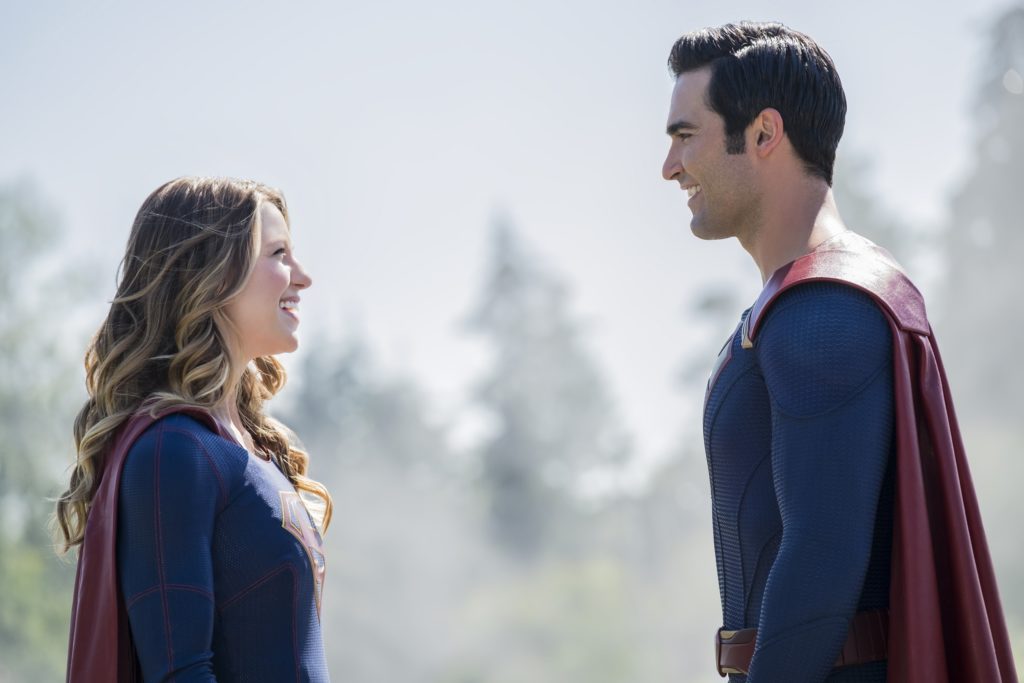 I’ve already talked about some of the changes headed Supergirl’s way after last week’s episode. The most notable, of course, was the impending departure of Cat Grant. We’ve known that Cat, much like Superman, wouldn’t last long in the CW-version of Supergirl. It’s hard to watch her say goodbye to both Kara and Supergirl, and in a way, their parting was almost too sugar-sweet. But it was necessary and fulfilling, if a bit hard to stand at times. Snapper Carr, though rough around the edges and not afraid to bite, doesn’t seem like he’ll come even close to filling Cat’s shoes. James Olsen certainly won’t challenge Kara in the way that’s needed for her character. Which leads me to the only real option: Lena Luthor.

But don’t mind me while I sit here and mourn the loss of Cat Grant. She was over-the-top at times, but exactly the kind of superhero we needed.

Kara has to deal with not only the loss of Cat and Superman, but also the new job. While I’m still irked at her being a reporter (especially since she showed no inclination toward writing or journalism in the past), I think the struggle could be good for the character. Snapper is okay so far, but I’ll reserve my true judgment for later episodes.

Cadmus, Metallo, and Metallo 2, OH MY

First, I have to ask: why are Alex and J’onn so nonchalant about Cadmus? With how adamant Alex was about finding her father at the end of last season, it seems almost out of character that for two episodes she’s been ho-hum on going after him. I’m being a little unfair, especially since the season started on the tails of last year’s finale, but it has been quite the shift and I’m eager to getting Alex and J’onn back to real work.

That being said, I love what the show is doing with Cadmus. Cadmus’ leader is oddly mesmerizing and I’m sure I’d be following her if I had been subjected to her experiments. Metallo, too, was well done. Not cheesy and simple like most of the “villain of the week” characters we saw early on last season. There was a power to him that took down both Superman and Supergirl, and that, is a frightening prospect. It took the Kryptonians relying on the DEO for aid to beat Metallo and Metallo Jr. but that’s not the last we’ve seen of Cadmus, not by a long shot. I especially loved the callback to Superman’s “Crisis on Infinite Earths” with their Supergirl poster (CW does this well): 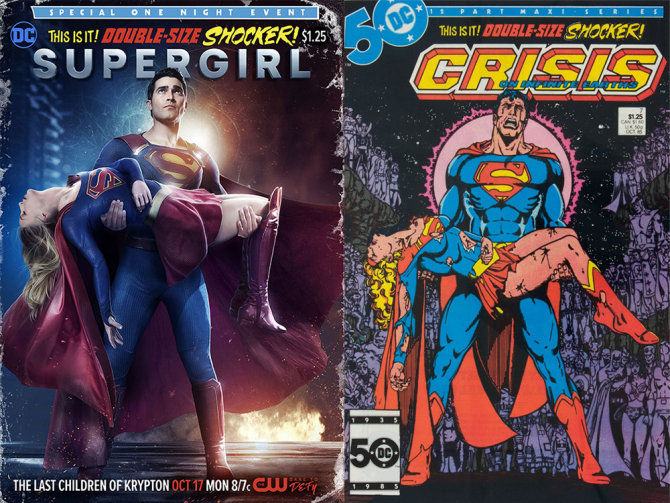 Alex and Kara and Clark and J’onn

The highlight of the episode, for me, came in the form of the conflict between two pairs of characters. First up, Alex confronts Kara about Superman and how, since his arrival, she has felt left out and not needed. When Kara tells her that she’s thinking of leaving National City for Metropolis, Alex rightly puts her in her place. Kara may enjoy the time she spends with her cousin but National City needs her. Alex needs her.

It’s this need to be useful that drives Alex to helping Winn in all his geekiness. Winn is the character who has benefited most from the network (and job) switch. He’s no longer the quirky IT guy who shows up to make a joke and hack something. He has a purpose outside of just being infatuated with Kara. Being allowed to blossom, to swoon over Superman, to make gadgets and technology, Winn has grown into a much more interesting character. And I need him and Alex to banter more often.

I need Alex to banter with everyone more often. 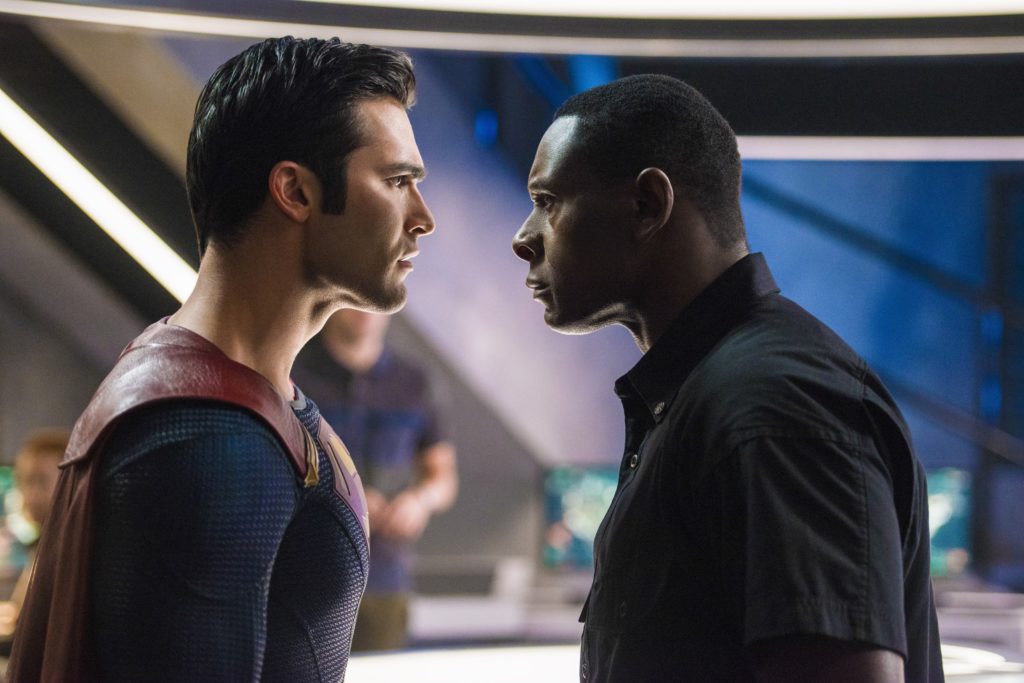 And then there’s J’onn and Clark. The two are forced to work with one another to learn more about Metallo’s impenetrable skeleton, but these an uneasy respect between them. Clark doesn’t like that the DEO keeps Kryptonite, which makes sense given that it could be used against Kara. However, since the world was held hostage by Kryptonians last season (in an attack that rendered Clark useless), it seems only smart that the DEO keep the material. Just, maybe, they vet their agents a little better. Don’t let that traitor from The 100 guard your precious resource. Also, I think Superman is a bit selfish in his concern. Yea, I said it.

I wish Cadmus hadn’t been so mwahaha evil right from the start. It makes sense, but one of the things I loved about Young Justice was that not everyone in Cadmus was bad. Misguided, sure, but not evil.

I’m so excited for the upcoming episodes. Mon-El on a misunderstood tear through the city? Alex meeting and, I assume, falling in love with Maggie Sawyer? MISS MARTIAN MAKING AN APPEARANCE?! Yes, please! (Did I spy my girl M’Gann in the trailer for next week??)