TVTV Reviews/Recaps
May 31, 2022
By: Christian Angeles

We present the case why this is the best season of the series, as broken down in our Stranger Things Season 4: Volume 1 Review.

After three years of patiently waiting for news on what happened to the gang post-Mindflayer showdown at The Battle of Starcourt, we’re finally here with the return of Stranger Things Season 4 Volume 1. Part one of the Stranger Things season. Whereas in the past, I’d written what I considered to be the most extensive scene-by-scene recaps, this year, as a less time-consuming approach, I wanted to write an overall review.

Why should you watch Season 4 of Stranger Things? Besides the fact that everyone’s talking about it after a post-holiday weekend, it’s also because this one is arguably the best season of the series to date, combining horror, campiness, and 1980s nostalgia flair. It is only now that the series seems to really have found a perfect balance. Emphasis on the horror for this season has worked out tremendously in the show’s favor as this is easily its best work in years. 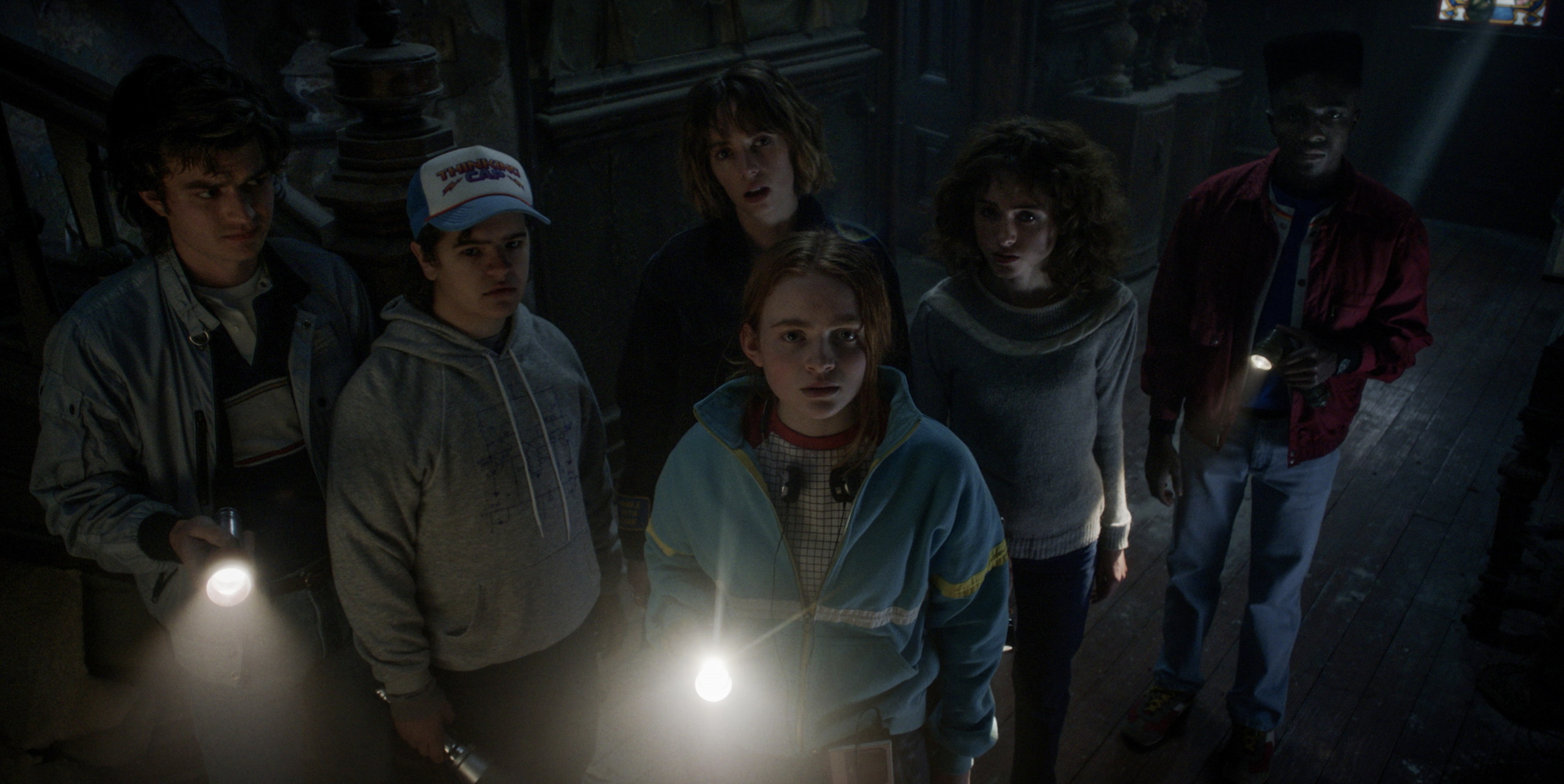 The performances are excellently on the mark. With breakout jobs across the board, as no actor really dragged out this year despite it being such a huge ensemble. The story, despite the length where some episodes are longer than full-fledged movies, is an edge-of-your-seat binge-thrill that continually leaves viewers wanting to hit the next episode button.

This season hits like a trident to the face in a trifecta of twists and turns, outright horror movie elements, and fun/funny campy storytelling. Which is not an easy achievement to pull off, yet Stranger Things Season 4 does so anyway.

The writing for Volume 1 of season 4 is what makes it so good. As seeing where things start, versus where it all ends makes for a compelling journey that’s different from where it all began.

It begins with Millie Bobby Brown’s Eleven. She’s doing her best to fake it, pretending that things are okay in her and the Byers family’s new home in Southern California. Her frequent letters to Mike on how her life has improved are soon revealed to be essentially lies, and the truth couldn’t be farther from her happy fantasy. In actuality, everyone’s favorite traumatized superhero is being bullied by the preppy blonde girl at school, Angela.

Played by Elodie Orkin, the actress performs every scene featuring her character with an entitled air of uppity nonsense, making the audience want to hit her due to Angela’s effortless cruetly. This ironically is exactly what Eleven ends up doing. All in a fashion that would make Will Smith proud, though more importantly, also lets viewers really re-examine the character after her assault at the rink-o-mania.

With the recent circumstances these past few months between the Oscars Slap, and of course, the horrendous gun violence happening across the US, a reflection back at El’s history with bullies, along with her personal history of violence in season one (both her blood-covered white gown after the atrocities at Hawkins’ lab, but also how she previously handled Mike’s bullies in the first season), all sort of plays into the biggest themes of this season that truly ties the entire series together. Namely how we understand trauma and violence.

As for the Hawkin’s group, you’ve got Lucas, who’s on the Basketball team trying to set up his new relationship with the jocks; Nancy, who is completely focused on journalism and ignoring her relationship with Jonathan; and Jonathan in turn, who is spending most of his days overanalyzing his life and getting high with his new friend, Argyle, back in California.

There’s also Mike and Dustin, still playing Dungeons and Dragons, now with the school outcast Eddie (played by newcomer Joseph Quinn), whose storyline gets surprisingly complicated but in good ways.

Joyce wants to free Hopper in Russia with Murray. Will might be in the closet. Steve and Robin look for love in all the wrong places.

Most importantly, this season is set during the satanic panic. A period in the 1980s when people feared the growing signs of occultism, linking it to Dungeons and Dragons, and in turn, ritualistic human atrocities, many of which get blamed upon murders this season.

It’s an interesting murder mystery with multiple layers and characters that somehow fires right on all cylinders, thanks to some solid character development, excellent performances, and more importantly a storyline that actual makes sense and ties it all together.

In traditional Stranger Things fashion, the season centers around a D&D villain. This time it’s named Vecna, the dark wizard/arch-lich whose appearance in the series makes for the first truly sentient villain/character. The result is utterly horrifying.

I can’t stress enough that the extra runtime really did favors in developing these characters. As there isn’t a single bad performance in the cast. The ensemble really stood out and every single character had a moment of actually doing something to progress the story or develop their personal arc. Which is impressive because not everyone usually gets an arc in TV.

With Millie Bobby Brown’s Eleven, I felt like there were far too many tears for me in those first two episodes. It feels a little repetitive in her continued inability to be a normal human, and as someone older and supposedly more mature, this doesn’t fully work for me. Mostly because, despite the motivations, almost every scene had her crying.

That said, it picked up by episode 3 when her character really began her journey processing everything that’s happened in attempts to gain her abilities back. It’s powerful storytelling re-contextualizing all we know about Eleven in finally understanding her journey as an experiment. Which honestly worked so well that I think audiences mostly forget how unbearably melodramatic it kind of started in the season.

The standout performances though was easily Max, whose storyline this season was such a great look at trauma and acceptance. I think episode 4’s “Dear Billy” may be an Emmy contender as it really left people hanging on the edge, uncertain as to what would happen next. All of which is thanks to Sadie Elizabeth Sink’s performance hitting the mark on doom and making us so concerned with what happens to her character. 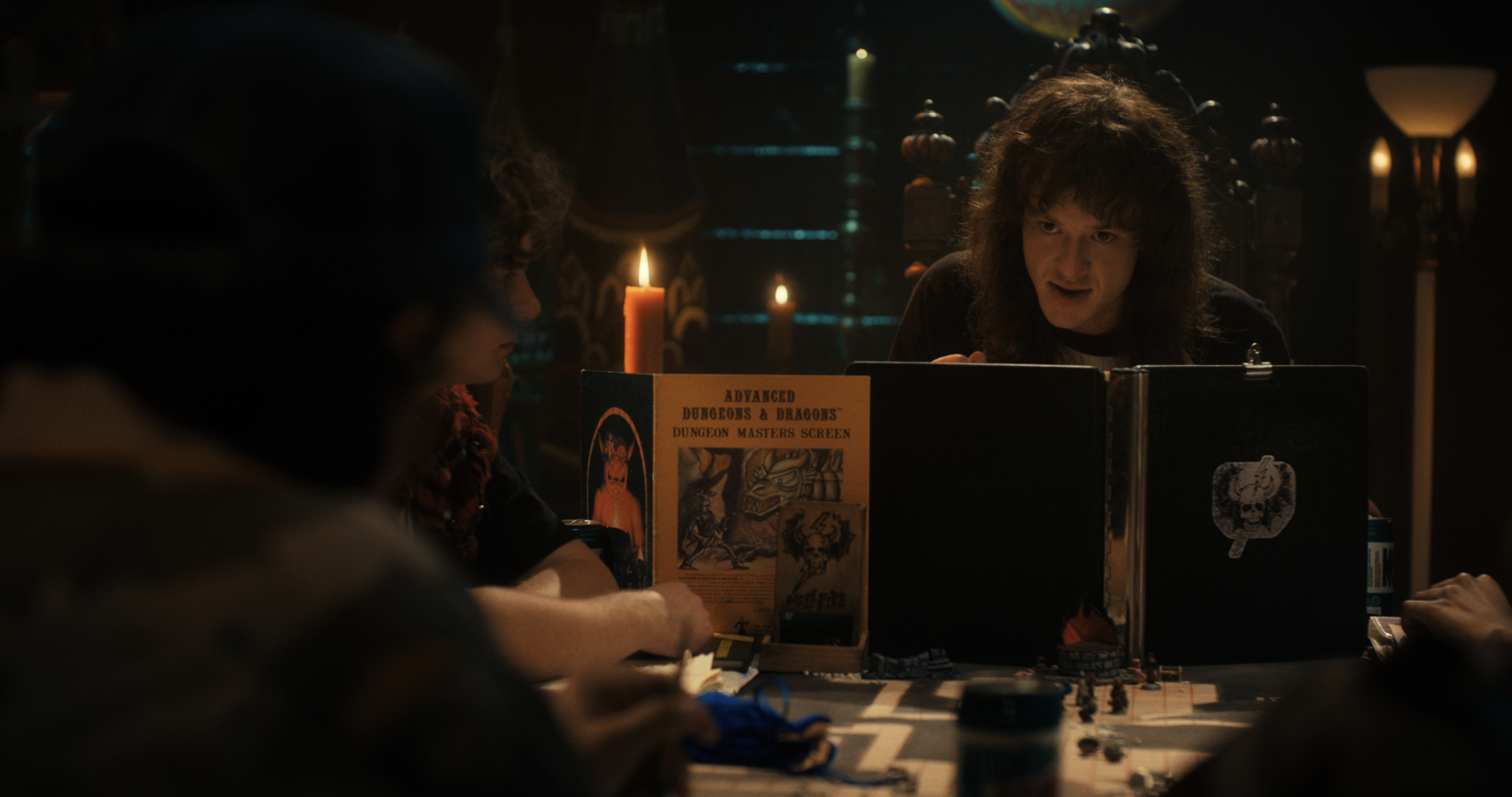 Though easily the best performance this season to me was in newcomer Jamie Campel Bower. Without spoilers, his role in this season carries it from beginning to end, but it does so in a way that the audience can’t appreciate until the end. A riveting job through-and-through that’s going highly underappreciated thus far.

That said, Maya Hawke’s Robin had excellent comedic timing this year, as did Gaten Matarazzo’s Dustin. Though one player, newcomer Joseph Quinn’s Eddie Munson, has had high praise from critics. The character shows great range this season from diabolic outcast to gripping romance to coward who runs, and then recalculated badass. Eddie is probably the one character who has the full range of emotions and development in terms of an arc outside of Eleven, which is weird, because he’s entirely new.

This year features Vecna as the really big bad monster. It’s poetic, given how they highlight it in the beginnings of D&D this season. All in your typical Stranger Things metaphor. Though this one does something the others haven’t: showcased a WHY for the first time, in the series’ great evil.

Speaking of which, the horror element is huge this season, with callbacks to the Evil Dead with the camera work, ghouls, and voice modulation. Stranger Things Season 4 features many ghosts and mental manipulation thanks to Vecna, who is a lot like if Freddy Kreuger gave birth to Pinhead, featuring Evil Dead Deadites and Pennywise in the delivery room.

The disturbing imagery is not suited for kids this year. Joints bend in the wrong directions. Sensory appendages go pop and get restitched, such as eyes and mouths. The practical effects are gruesome to witness, as the series added Barrie Gower in the new development team. The same practical effects artist responsible for making Game of Thrones’ Night King, and the radiation victims in HBO’s Chornobyl.

Fun fact, the HBO series also brought with them acto Tom Wlaschiha to Season 4. He played the faceless man/Jaqen H’ghar in Game of Thrones.

There are a lot of big events this season and I don’t want to spoil the good ones for those who haven’t watched it yet. Will’s sexuality is definitely one that I think fans in the LGBTQ community want to see more elaborated upon; though ironically, I do think Robin does a better job in representing that community. And I genuinely believe the discrepancies have less to do with their respective gender orientations and more with how they’re written, with Will being more passive and Robin being more proactive.

Hopper’s storyline makes for an entertaining separate movie. One that’s very fitting given that actor David Harbor was shooting Black Widow at the same time (also, a Russian themed drama with a partial set in prison).

The biggest takeaway though is the series villain, which is tied in unbelievably well in a well-written finale. Not only did this storyline neatly make sense of the entirety of Stranger Things, but it also was just really compelling. With the psychological horrors conveniently tying together every character’s past drama experienced in the last few years. Eleven, Nancy, and Max’s storylines specifically.

The End Is Near

Stranger Things Season 4 was divided into two parts. A follow-up with favorite characters, while introducing what will be what seems to be their endgame. Now in high school, the Hawkins children have to deal with both the mystery of what’s happening, but also in just so many ways, it feels like the show is setting up an extended Stranger Things universe.

The murder mystery feels traumatizing and has only escalated with regards to intensity as each season progressed. Likewise, Hopper’s story feels very different in that it’s action-heavy. David Harbour’s Hopper finally comes to terms with everything in his life thus far.

Eleven’s story is seemingly the thread that drives the show. But with the extended episode length and planned extended finale, to debut in July, it really just develops everything about the Upside Down in a way that audiences haven’t seen. With wide-angle shots and a lot of strange explanations as to why everything looks aesthetically the way that it does: along with the context of the true evil of this season and the history involved with that revelation.

The Verdict on Volume 1

Stranger Things Season 4 volume 1 is easily the best season of the series that finally ties it all together for a deep story filled with terror, campiness, and resolved conflicts. The acting is superb. Vecna is more-or-less the series’ Thanos. The gorgeous special effects, both SFX and practical, are some of the best studio work in the industry.

A must-watch for fans and for anyone curious as to how to tightly wrap up a longstanding popular TV series. I’d give this one a perfect score as right now… though I may change my mind, depending on how it wraps in July.

@theworkprint
Follow
Previous article
In 2022, Asian Representation in TV and Film is Better, but Still has Room to Grow
Next article
Crazy 8 Press to Launch PRISM on Amazon Vella