Stephen Colbert is the new thing on late night. Who needs him, AM I RIGHT? We’ve got Fallon. We see the things he does on YouTube. They’re just so cute.

It’s hard to follow in the footsteps of late night’s greatest. The names carved into the halogen-lit world of the late night comedy world is full of some of the most famous: Tom Snyder, David Letterman, Johnny Carson, Craig Ferguson…forgive me…I’m struggling to say the name of the Dorito guy who replaced Carson but I still can’t bring myself to do it.

Stephen Colbert debuted last night as Letterman’s “Late Show” successor — though he won’t call himself that.

“Just for the record, I am not replacing David Letterman. His creative legacy is a high pencil mark on a door frame we all have to measure ourselves against,” Colbert tries to explain to his accepting studio audience. “But we will try to honor his achievement by doing the best show we can and, occasionally, making the network very mad at us.”

It was a nice moment on Colbert’s debut effort. One that was slightly maudlin but necessary. 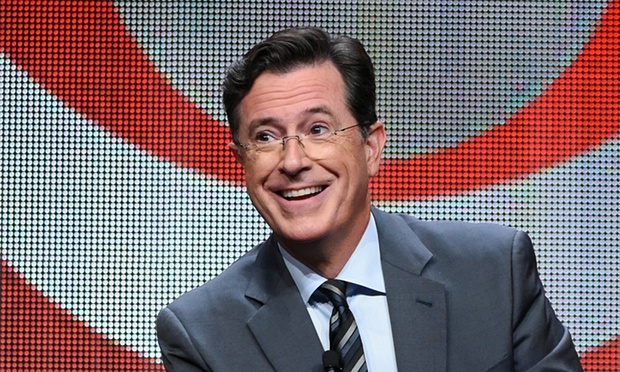 The lucky reader who finds my ranting and raving might wonder why I can’t just say Jay Leno’s name. Fine. Jay Leno. That’s his name. I’ve never considered him a late-night great and, to this day, I will never know why NBC had such a hard-on for Leno nor will I understand why he held such a large audience at his attention. Leno always seemed “safe” to me. He was a milquetoast Carson. In fact, I don’t think I can bring myself to put his last name in the same sentence as Johnny Carson. The two just didn’t have the same edge. Obviously, NBC saw something I didn’t and profited off of Jay’s success (he was almost always #1 in the Late Night Wars) but it was always Letterman I tuned to before I went to bed.

When I graduated Junior High, my Mom’s graduation gift to me was a 19″ Sony Trinitron TV. Back in the day, we didn’t pipe cable into my room, we used the antenna. I didn’t care. I was just happy to have a TV in my room because it meant that my brother and I could play video games without my Mom telling us to turn it off so she could watch something. There it was: bright, big, beautiful, sitting on top of a rickety wooden table that, had it collapsed, would have destroyed the Nintendo Entertainment System we had. As we only had over-the-air antenna broadcasts, we got NBC, FOX and CBS. As NBC’s signal seemed to be the most clear, Letterman became the show we fell asleep to — or didn’t. We’d always turn the brightness down so my Mom wouldn’t detect that we were watching something when we shouldn’t and what fun we had!

While Jay had his headlines and his dumb “giant chin gym guy”, Dave was randomly solving the puzzle on Wheel of Fortune or trying to figure out how many guys in bear suits could fit in a juice bar. When he ran out of guys in bear suits, he sent a guy in a Spider-Man costume. If those ran dry, he sent guys in astronaut costumes. In fact, if one were to trace the true path of late night righteousness, one might find that the path burned to Letterman. Even if his audience wasn’t buying into his goofy humor, Dave had the good ol’ Top Ten list. He was over with the crowd.

His interviews weren’t glad-handling affairs, either. He could dig deep in his quest for interview gold. So much so, Cher told him he was an “asshole” on his own show. Dave was the man who backed Paris Hilton into a corner with his hardball questions regarding her unlikely celebrity status, who survived a needlessly pretentious Madonna, who was flashed by Drew Barrymore, who seemingly played along with the likes of Joaquin Phoenix and his stoned rapper character, who was stunned when Andy Kaufman and Jerry Lawler and their white-hot wrestling feud got physical right in front of him, and who brought us back home with classic Carson comedic mainstays Charles Grodin and Steve Martin. Dave wasn’t above the old-fashioned put-ons and bits to promote a show, a movie, a book, or a character. Even with all his success, Jay Leno’s interviews seem standard and boring in comparison and I struggle to recall a guest or a moment on his show that is or was as memorable. 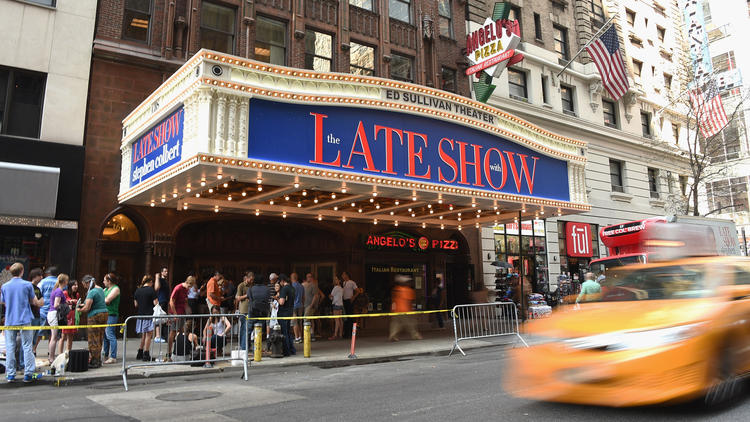 It’s quite the thing, then, that Stephen Colbert knows his way around the comedy landscape. As a Daily Show cast-off, Colbert played a ruthless, conniving Conservative named “Stephen Colbert”. Just saying that name can chill the spine of many a dedicated viewer. He modeled himself after Bill O’Reilly which was ironic as hell, considering that not even O’Reilly, himself, seemed to catch on to what Colbert was doing. Foolishly inviting him on The O’Reilly Factor, Colbert beat O’Reilly at his own game. Whereas O’Reilly seemed content with attempting to discredit Colbert and his colleague, Jon Stewart, Colbert stood his ground and fielded O’Reilly’s pointed questioning, the heavy shots bouncing off Colbert’s chest so hard, you’d swear you’d hear the sound of ricocheting bullets.

“I don’t want you to be a French guy,” O’Reilly quipped in regard to the pronunciation of Colbert’s name. “Who are you?!”

Stephen Colbert has big shoes to fill. About 20 minutes in, his show seems to falter. To the uninitiated late night viewer, his unique brand of inside baseball seems a touch off-putting. In true Letterman fashion, however, it’s all in jest and Colbert resorts to self-deprecation: CBS President and CEO Les Moonves sits in the front row of the Late Show Theater. He’s smiling and supportive — but at the same time, coldly calculating and unforgiving. He’s also manning some sort of dial system: if Colbert succeeds, the show stays on the air. If not…well…at one point, Colbert trips and falls, declaring himself unfit to run the show — causing Moonves to flip the switch so that we’re, instead, watching CBS’s The Mentalist, a sure ratings-grabber.

Colbert quickly apologizes and brings on his guests, George Clooney and Republican candidate for President, Jeb Bush. The first interview is your usual bit-fest. Clooney showing up with no movie to plug (we won’t mention the flop that was Tomorrowland), so Colbert and Clooney make one up. For the next few minutes, we get clips of Clooney defusing bombs and hanging on to airplane doors or loudly declaring that he’s in the middle of a love-making scene with the lead actress. There’s something familiar about this formula even if it seems somewhat hurried or impersonal. 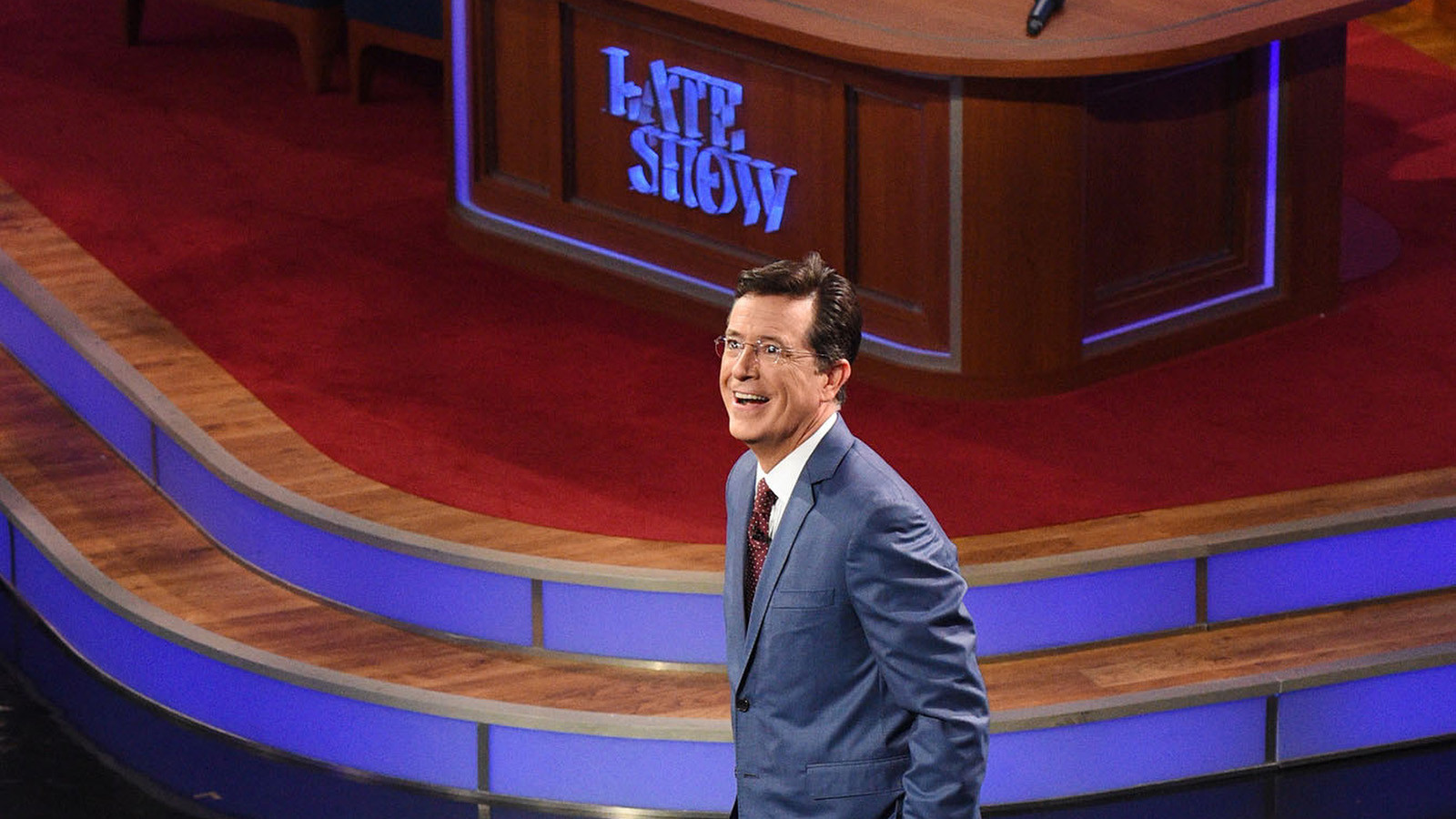 It isn’t until Jeb Bush arrives where we finally see Colbert at his most polished: the political pundit/talk show host who’s looking for sanity in an insane world. Before Jeb’s appearance, Colbert’s only political reference was a bit about Donald Trump’s constant verbal follies, using a seemingly never-ending bag of Oreos as a metaphor. The bag was a big media conglomerate Colbert dubbed “Big Cookie” and for each Oreo eaten, Colbert presented his audience with a clip of Trump saying the some of the most idiotic things ever said by any Presidential candidate. “Just one more,” Colbert declares, shoving another Oreo into his mouth. “I just can’t get enough.”

With Bush, Colbert isn’t much different. He’s still respectful and full of tact, calling him “the front-runner for the Republican nomination — barring an exception we will get to later.” But, as kind and down-to-Earth as Bush may be, Colbert doesn’t mince any words and unpretentiously tells Bush, “There’s zero chance I’d ever vote for you.” This is typical of Colbert. Old hat, expected, and welcome — especially with the Presidential Election right around the corner. Except for Jon Stewart, nobody does this like Stephen Colbert. This is his yard and his game. Bush takes this in stride — but Colbert’s not finished yet. He asks Bush why his mother would say that the world doesn’t need another Bush in the White House. All Jeb can muster is, “She was just joking!” We know that’s the not the right answer but it’s fun to see Jeb flail and wince, play along, but ultimately come out in one piece.

This is the sort of late-night entertainment we hoped Colbert would put into his show. 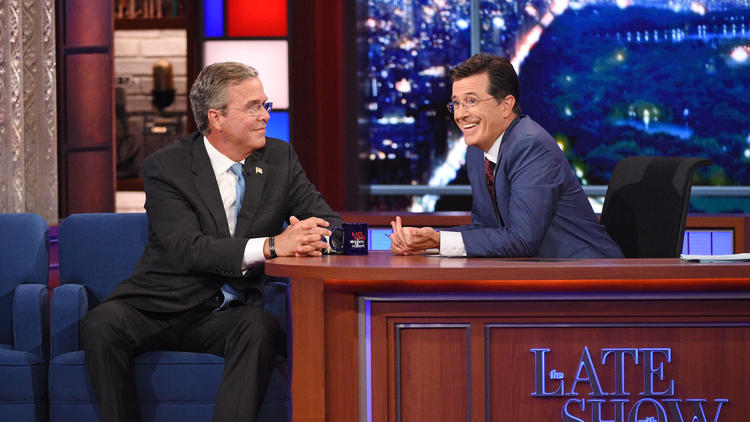 If there’s a weak spot, it’s Colbert’s band, John Batiste and “Staying Human”. As talented as Batiste seems to be (he comes with a great deal of street credit), the group really feels generic and unorganized for a show like this. Standing there and playing a Melodica just doesn’t spell “musical genius” to me and their style of play isn’t memorable. The opening night musical guests? Susan Tedeschi, Mavis Stapes and Ben Folds. Even that segment is minor and feels more like a round of Rockband on your buddy’s Playstation than something CBS planned and executed. Perhaps it was just an off-night and the producers will fine-tune this. We shall see. Colbert’s very likable and can carry the show on his back for quite some time. Obviously, the kinks will be ironed out. Tonight was about having fun, letting loose and seeing what stuck and what didn’t.

What’s clear is that Colbert’s “Late Show” differs greatly from what is presented by Jimmy Fallon. There’s a rare bit of sportsmanship in this episode where Fallon wishes Colbert luck on his very first show. That may be the last bit of camaraderie we may see if tradition holds true. I do like both shows and I look forward to a good battle between Fallon and Colbert. For the short-term, Fallon has the edge as his formula is polished and established. In terms of intelligent viewing and razor-sharp wit, however, Colbert’s got Fallon’s number.

May the best host win.