‘State of Decay 2’ Review: When a Video Game Becomes Its Own Worst Enemy

GamingGaming ReviewsReviews
August 7, 2018
By: Jen Stayrook
There’s a game mechanic in Fallout 4 where you, as the Lone Survivor, are able to create settlements as a way to “improve” the struggling post-apocalyptic world. More often than anyone would like, these settlements are under siege by any number of threats and it will be up to you, the hero, to protect these people from enemies near and far. Should you fail or not make it to the settlement in time, you’ll lose standing with the factions. And there is no beating these radiant quests. They continue until you decide you’re done with Fallout 4. Objectively, they’re the most irritating part of the game.
Now imagine a game based solely around that frustrating mechanic, throw in some Where’s Waldo looting, and zombies, and you’ve got State of Decay 2. 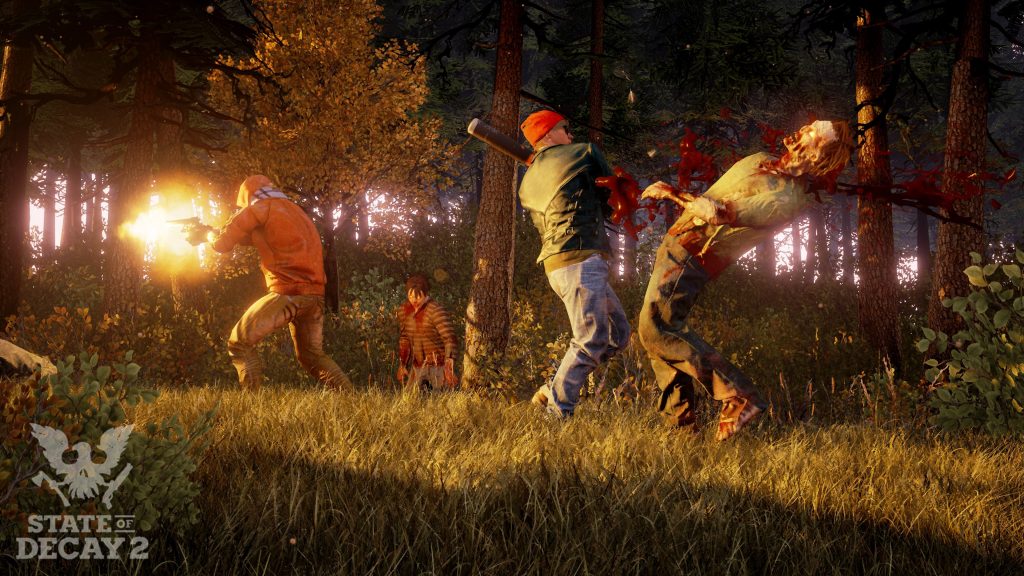 Developed by Undead Labs and published by Microsoft Studios, State of Decay 2 is an open-world zombie murdering machine of a game. In this post-apocalyptic land, you lead a band of plucky survivors who get to decide what kind of world will still be around for years to come. You do so by being a do-gooder and helping others survive zombie infestations or by killing them and stealing what little goods they have because hey, times are tough and I need those three jugs of ethanol to poison the girl who keeps picking fights in my base.
Judging by the marketing, State of Decay 2 wants you to believe there’s a compelling narrative to be told. It wants you to feel that you’ll be playing this game for in-game years to come. You won’t. If the story somehow gets better around day 300, no one will know because no one is that much of a masochist to continue looting for that long. And that’s if your whole camp hasn’t fallen to the zombie attacks because NO ONE CLOSES THE GATES, GUIN.
When it comes to choosing your band of heroes, you get a few options between pairs of starting characters. You can be a brother and sister, a pair of old friends, or an odd couple. If you’re a fan of min-maxing, you probably want the Odd Couple, but mostly, choose based on the stats you think will be most helpful. Naturally, I choose the on-again-off-again lesbian couple because I’m nothing if not predictable. I hoped that somewhere down the line in the story I’d see the two interact in a compelling manner but no. Despite carefully cultivating my apocalyptic Themyscira, and forcing the two to go on outings together, there’s hardly any banter between the two that you don’t already see in the tutorial. In fact, there’s little character development at all and most of the recruitable survivors are downright unlikable. I had to kick a survivor out of my base because I wasn’t helping her find her Renaissance Faire Mace replica fast enough and she was so irritated by my slacking off that she picked fights with everyone. Honestly, it was a hostile environment that frankly I didn’t expect from someone who was so into cosplay, but I had to protect my Girl Power community and kick her toxic butt to the curb. 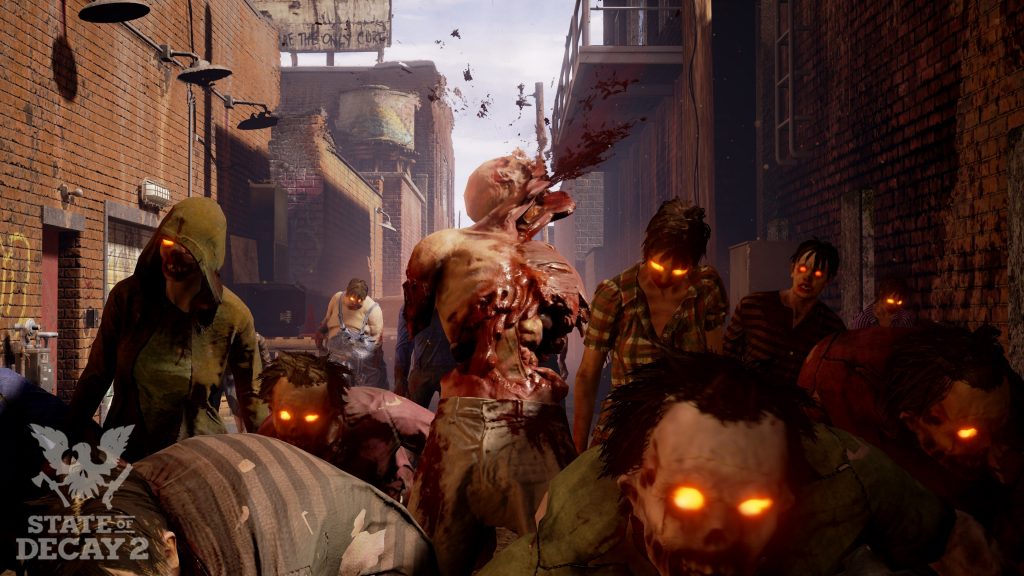 Because State of Decay 2 is a zombie game, the only real enemy is, well, the undead. Combat is pretty solid throughout, both with melee and ranged, which is good because you’ll be fighting a lot. Not challenging battles but mostly the repetitive struggles of killing a basic horde or two. There are unique enemies like bloaters, ferals, and juggernauts, which do change how I approach a fight (e.g. I can’t just run over a juggernaut with my car because the vehicles are the best weapons in the game), but once you acquire better guns, they can be dealt with easy enough provided you don’t try to just stand and fight your way through the attacks.
Most of the fighting challenge in State of Decay 2 comes from fighting Plague Hearts and ridding the map of their disgusting presence. If you cheese them like I did, wiping out surrounding plague zombies with a jeep and chucking a dozen molotovs into the infected space, it’ll be easy peasy explosive squeezy. The more plague hearts you kill, the harder the subsequent ones become but I’m mostly a terrible video gamer and I managed them throughout using the above strategy with no problem. And that’s saying something.
Much of State of Decay 2 is spent looting buildings for goods to maintain your base. In every new building you’re given the amount of lootable boxes to find and it’s like a mini-game of Where’s Waldo, only Waldo is a blinking container that sometimes glitches out of existence. And that’s a good thing because you’ll spend a significant time trying to figure out how to haul 8 pieces of loot and 4 rucksacks back to the base or outpost. Because you carry so little on your person, despite the largest backpacks available, much of gameplay is shuffling resources to and from different buildings so that it feels like you’re being productive in-game even though really, you haven’t accomplished much.
The end goal of State of Decay 2 is to form alliances among the different factions throughout the world so that when the final fight rears its ugly head, you’ll have allies to join you in the battle. But in order to gain those allies, you have to frustratingly rescue these helpless groups from any number of struggles: a lack of supplies, an attacking horde, a group of bandits, and so on. And you have to do so within the allotted time. If you’re in the middle of a mission or across the map, too stinking bad. Help them or you’ll become enemies.
Halfway through the game, I stopped responding to the calls for help because I was tired of giving handouts to these apocalyptic freeloaders and it made the game so much more enjoyable. When it came time to fight the final battle I didn’t have any allies and it was one of the most anti-climactic endings to a video game I’ve ever seen. As my leader gave her inspiring Independence Day-esque speech, I missed most of what she said because over the radio a group settlers threatened me for not helping their settlement and that glitch is the perfect description of State of Decay 2. You can try to be a hero but people are going to whine and hate what you do anyway.
But hey, if you want, you can now start a more challenging new game plus version with your previous survivors, doing all the same obnoxious things you did before but on a different map.