Lower Decks loves its references, and this week the show took us on an adventure to the space station Deep Space Nine. For some, mixing the most light-hearted Star Trek show with arguably the most serious might feel a bit jarring. But let’s not forget that in between the grimmer storylines were plenty of fun moments. And, this being Lower Decks, it’s that side of Deep Space Nine that “Hear All, Trust Nothing” leans into.

The episode starts with the crew of the Cerritos heading for Deep Space Nine for one of their usual low-stakes assignments: They’re basically interstellar Drizly, delivering a large number of alcoholic gifts to support post-Dominion War trade negotiations between the Federation, represented by the Vancouver, and the Karemma, a commerce-focused species from the Gamma quadrant and former Dominion members. But then – surprise! – the Vancouver is called away to save lives on another planet, and a frustrated Captain Freeman is called upon to lead negotiations right as the Cerritos arrives at the rendezvous point. While Freeman storms off to cram months’ worth of diplomatic preparations, Ransom orders the Cerritos to circle around the station, pretending to be in awe, to buy time while the Deep Space Nine theme song plays… and then do it again. 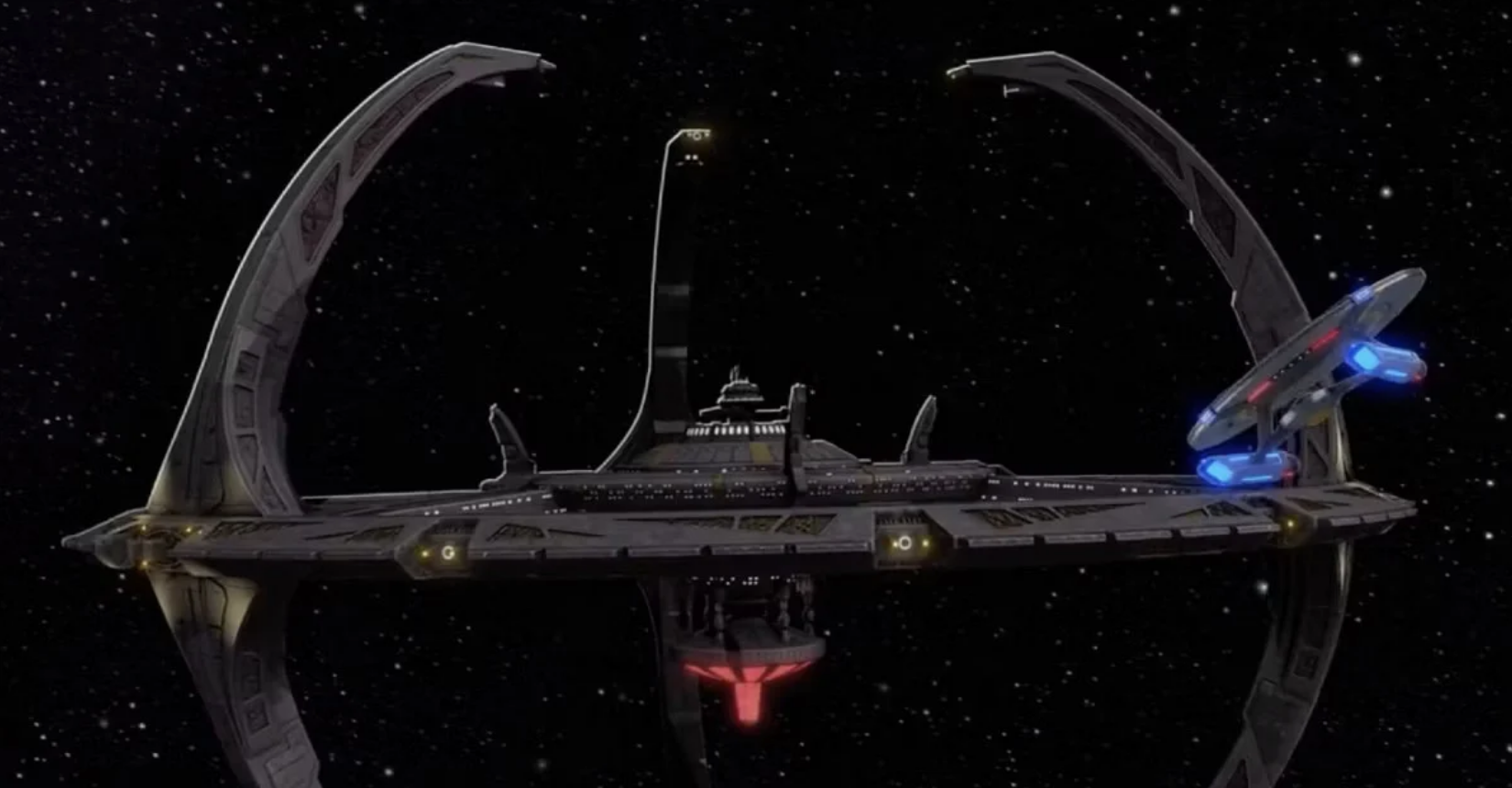 While Freeman has seemingly been thrown into a higher-stakes situation than usual, our lower deckers are preparing for some completely inconsequential escapades. Boimler, Tendi, and Rutherford are excited to visit Deep Space Nine and check out Quark’s bar. Mariner pokes fun at them, declaring her intention to relax on the ship. But then her new girlfriend, Jennifer, proposes that the two of them hang out with Jennifer’s friends, and Mariner, antsy about what this could mean for her relationship, instantly changes her tune. Despite her hesitation, she caves to Jennifer’s request to go to her friends’ “salon.”

Boimler, Rutherford, and Tendi arrive at the Deep Space Nine promenade, while Freeman is greeted by Colonel Kira, who’s now in charge of the station. It is references galore as Kira takes them into Sisko’s old office, which still includes his baseball. And it turns out that Kira and Shaxs were in the Bajoran resistance together. Their reminiscences soon turn into a heated polite fight over who saved whose life more time, which each claiming the other was more heroic. 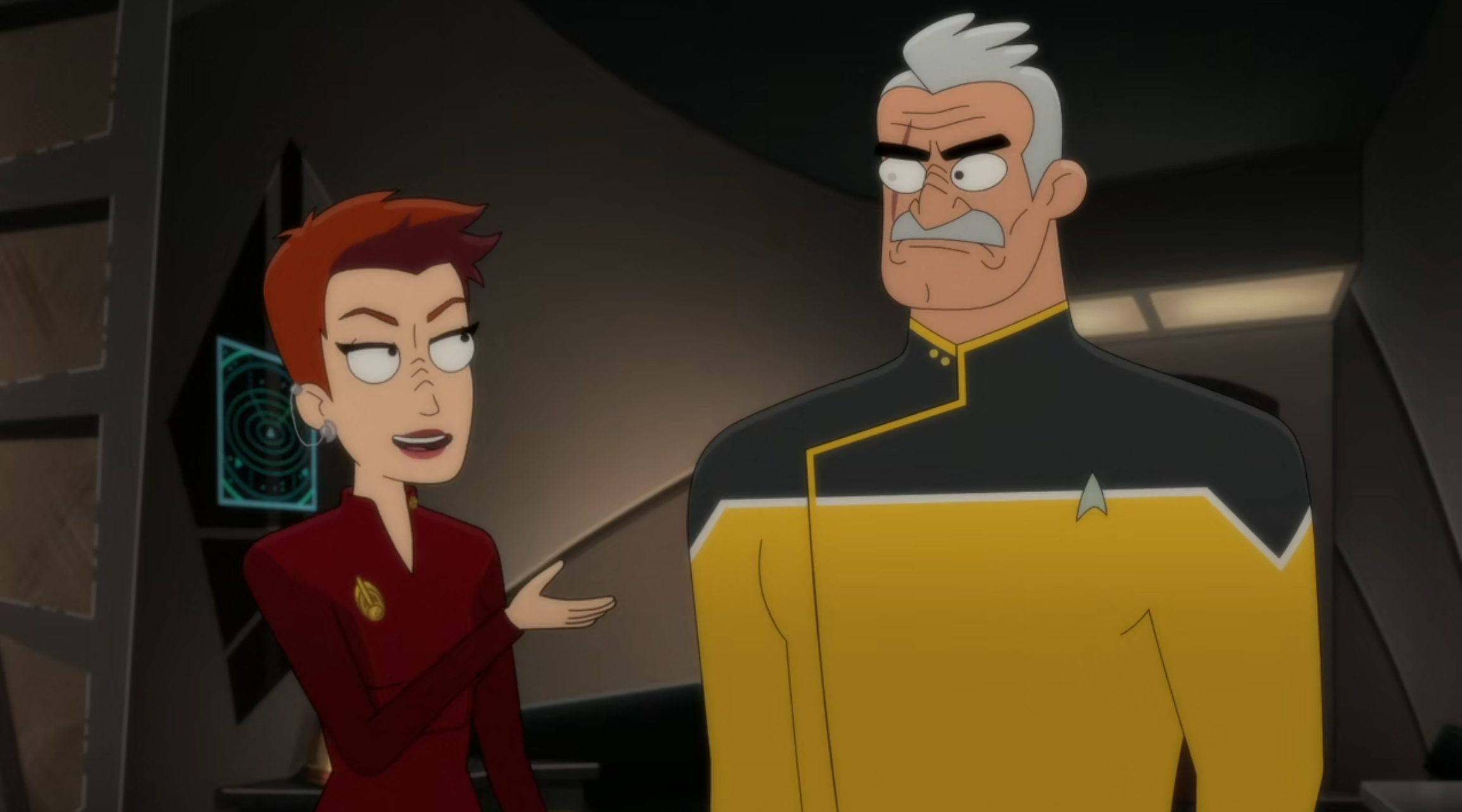 I’ll admit that it was a little weird seeing this cartoony Kira after being so familiar with her tough, no-nonsense live-action counterpart. But Kira always did have a quirkier side beneath all that, it would have been even weirder if she’d been in Serious Mode on what is, fundamentally, a comedy show.

The Karemma arrive with an ominous tone, with one pointing out that they always have the “other option” if diplomacy fails. Looks like Freeman’s about to be in for an unpleasant surprise. 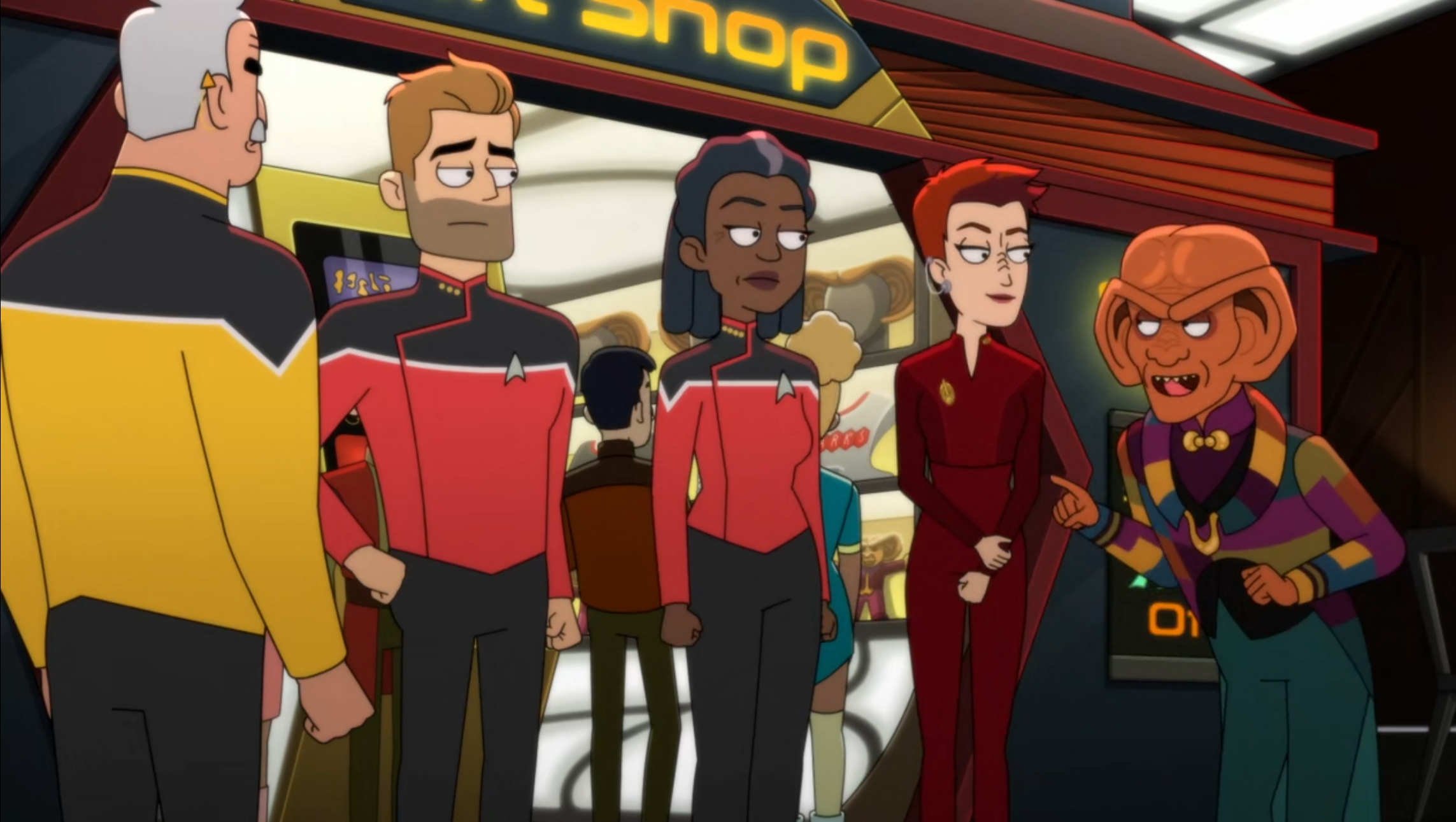 Boimler, Tendi, and Rutherford arrive at Quark’s, where proprietor Quark is cheerfully running a thriving business that now has franchises all across the Alpha Quadrant. Quark, upon greeting Kira and Freeman, proposes a franchise at Starfleet Academy, though Freeman says no. Quark was always one of the lighter characters on Deep Space Nine, and let’s face it, the Ferengi are by design rather cartoony in the first place, even in live action. So seeing him in cartoon form felt pretty natural.

Boimler, still determined to be “Bold Boimler,” goes to gamble at the Dabo tables. Meanwhile, Tendi is approached by Mesk, a fellow Orion Starfleet officer, who’s extremely excited to meet another one of his kind. Mesk immediately starts talking big about being an Orion, even showing off an Orion pirating weapon that he got a religious exemption to wear with his uniform. Rutherford is excited by Mesk’s enthusiasm and grand claims about being a fierce Orion pirate while Tendi is visibly uncomfortable. Mesk offers to take the two on a tour of Deep Space Nine, which Rutherford accepts while Tendi squirms.

Back aboard the Cerritos, Mariner arrives at Jennifer’s friend’s salon, where everyone is wearing sweatshirts and making candles. She does her best to put on a polite face and hold it together during the hippy-dippy display, pouring herself a large drink. To her surprise, two of Jennifer’s friends ask her about Boimler, who they find attractive. 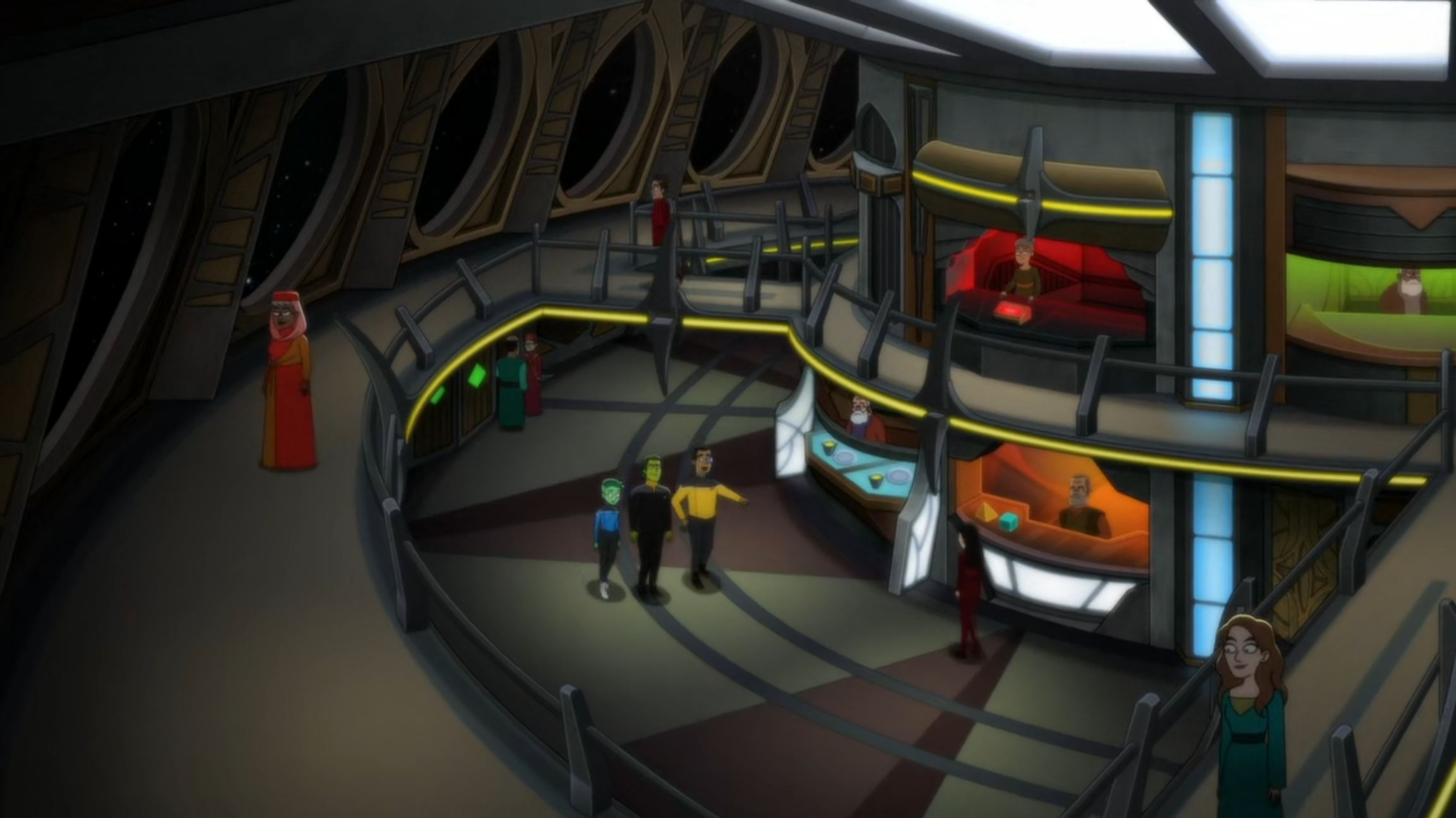 Rutherford and Tendi, led by Mesk, walk the Promenade. Rutherford rushes to the second level to sit over the edge with his feet dangling, Jake Sisko style. Mesk continues talking big about being Orion with Tendi, who seizes upon a communication from Freeman, requesting assistance, as an excuse to get away. Much to her dismay, Mesk gets himself reassigned to provide security for her and Rutherford as they deliver a bunch of crates to the Karemma ship. And the big Orion talk continues, with Tendi cringing more each moment.

Meanwhile, an awkward Mariner continues trying to hold it together while Jennifer’s friends engage in spoken word and interpretive dance performances around a bunch of candles.

Freeman tries to convince the Karemma of all the commerce opportunities in the Alpha Quadrant while the Karemma scoff. Hoping that talking to an entrepreneur will help the situation, she takes them to Quark’s. But Quark, who apparently still holds some Dominion War grudges, wants nothing to do with them, and soon, a heated argument commences.

On the Karemma ship, Tendi finally snaps at Mesk’s unrelenting boasts about being all pirate-y, saying that their people’s criminal reputation isn’t cool, it’s embarrassing.

Where is Boimler during all this? Why, he’s been winning big at the Dabo table, much to the dismay of a Ferengi employee.

Despite Freeman and Kira’s attempts to smooth the situation between the Karemma and Quark, things go south when the Karemma smash Quark’s fancy replicator. One of them uses a device to trigger a systemwide shutdown, and then the Karemma grab Quark and beam back to their ship. As they return, Tendi, Rutherford, and Mesk are sealed into the cargo hold, and soon, and the ship takes off.

The systemwide shutdown affects the Cerritos, which is docked against Deep Space Nine, and Mariner finds herself sealed inside a dark room with all of Jennifer’s panicking friends, whose candles are fast consuming oxygen. She tries to calm them and be polite, even as one of them refuses to blow out a candle because it represents their “intentions.” Jennifer pulls Mariner aside and asks why she’s being so… nice. Mariner admits it’s because she’s afraid to offend Jennifer’s friends, which might offend Jennifer, which might ruin their relationship. Jennifer confesses she likes Mariner because she’s bossy, doesn’t take crap from anyone, and that she’d been looking forward to seeing Mariner take her hippy-dippy friends down a peg. Relieved, Mariner starts ripping the friends a new one and even uses her phaser to stun them while Jennifer watches delightedly. Realizing it’s not a good look for the two of them to be the only ones not stunned, they embrace before Mariner stuns the both of them as well.

On the Karemma’s ship, Rutherford calls upon Mesk to use his pirating abilities to get them out of the cargo hold. If ever there was a time to steal a ship, this is it. That’s when Mesk breaks down and confesses that all the big talk was to cover up the fact that he doesn’t actually know anything about being an Orion pirate. He was adopted by humans and raised in Cincinnati, and everything he knew about Orions came from bad holo-novels. But because he hadn’t met any other Orions until Tendi, playing into stereotypes worked for him.

Tendi, in her friendly Tendi manner, tells Mesk to just be himself. And then she leaps into action with those Orion pirating skills that Mesk had been boasting about this whole time. She hot-wires their way out of the cargo bay, knocks out a passing Karemma, takes his gold-pressed latinum tooth, punches her way into the control room, and uses the told from the tooth to hack the ship into stopping right as it’s about to enter the wormhole to the Gamma Quadrant. A tractor beam from Deep Space Nine, whose power has been restored, then pulls the Karemma ship back.

In the Deep Space Nine brig, the Karemma reveals that Quark’s replicator was built from proprietary Karemma technology. Freeman realizes they hadn’t been kidnapping Quark – they’d been arresting him. She announces she has a solution that will make both of them happy.

In her captain’s log, Freeman declares that the mission was a success. The Karemma have agreed to open trade and not to arrest Quark in exchange for 76% of his franchise’s profits. Mariner and Jennifer are at Quark’s bar having a drink, and Jennifer is delighted that her friends are now scared of Mariner. Quark tries to confront Mariner about her tab, but Mariner blackmails him into clearing it – as she has a disc with an image of Quark’s head on Kira’s body that Quark had thought erased. Quark snatches the disc as a suspicious Kira approaches and demands to know what’s on it.

And what about Boimler? Still winning loads and loads of latinum. The Ferengi employee offers him a gift card to Quark’s for twice the latinum’s value in exchange for him not taking the winnings. Boimler happily accepts – they don’t use money in Starfleet anyway.

Tendi talks to Rutherford and decides to embrace her past, holding up the gold-pressed latinum tooth she’d taken. Except it’s kind of gross and she doesn’t know what to do with it. Quark snatches it, citing Rule of Acquisition #9: “Opportunity + Instinct = Profit.”

All in all, “Hear All, Trust Nothing” is another solid and fun episode of Lower Decks, with slightly higher stakes than usual for Freeman, and entertainingly low stakes for Mariner and Boimler. They basically have nothing to do with the plot. It was nice seeing more time dedicated to Tendi, with Rutherford comfortably in his role of the supportive best friend. For fans of Deep Space Nine, the crossover and references are loads of fun as long as you don’t take them too seriously… which why would you, when this is Lower Decks?

Lower Decks loves its references, and this week the show took us on an adventure to the space station Deep Space Nine. For some, mixing the most light-hearted Star Trek show with arguably the most serious might feel a bit jarring. But let's not...Star Trek: Lower Decks Season 3, Episode 6 – "Hear All, Trust Nothing" Recap and Review