Lower Decks leans into its own reputation

On an alien planet, a male scientist approaches a glowing green rock, and a beautiful woman, who the scientist recognizes as his seventh-grade teacher, appears in a revealing toga and showers him in praise—a fun reference to all the space temptresses from the original series. Naturally, it doesn’t end well for the scientist, as he’s transformed into stone. The “camera” then reveals a sinister-looking rock alien.

Is this the start of an episode full of confrontations and negotiations with a new hostile species? Of course not! This is Lower Decks! The USS Cerritos arrives at the planet, Jengus IV, not to broker peace between Federation scientists and the rock aliens (the Scrubble), but to clean up after a cooler ship (the USS Hood) has already sorted out the mess.

After going on a rant about how Federation scientists are a bunch of “weirdos” who always end up with stomachs full of eggs and stuff (poking fun at the countless space scientists who’ve wound up in alien trouble in Star Trek), Ransom tells Mariner, Boimler, and Rutherford to go down to the planet with his fanboy Stevens to meet up with the crew of another support ship, the USS Carlsbad, and dismantle the scientists’ outpost as per the peace agreement.

Upon arriving, our lower deckers introduce themselves to the three Carlsbad crew members, only to be met with some attitude. Apparently, the Cerritos has a reputation. While the Carlsbad crew takes apart the outpost, the Cerritos three clean up the “fantasy rocks” (those glowing things that cause tempting visions and then turn you into stone). Mariner, Boimler, and Rutherford assume that the others look down on the Cerritos for all the shenanigans they’ve gotten themselves into over the past two seasons. Determined to prove they’re not losers, they start racing to clean up the rocks to show off how efficient and effective they can be. 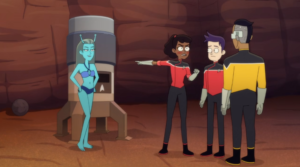 Naturally, the rocks reveal our characters’ fantasies, which are visible to all. First, engine enthusiast Rutherford sees famed engineer Leah Brahms asking to do some engineer-y stuff with him (NERD!!!). Then, try-hard Boimler sees an admiral claiming to need his expertise and offering promotion opportunities (TOOL!!!). But the most embarrassing vision comes for Mariner, who sees their Cerritos shipmate Jennifer in a sexy bikini and calls her “babe,” much to Boimler and Rutherford’s amusement.

Then Stevens accidentally knocks over the barrel containing the collected fantasy rocks, and all hell breaks loose. Nightmarish visions appear: clown-faced Klingons, a Borg serpent, etc. Stevens is turned to stone while the lower deckers of both the Cerritos and the Carlsbad make a run for it. 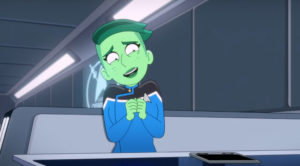 Meanwhile, the ever-cheerful Tendi has started her senior science officer training on board the Cerritos, though to her disappointment, her mentor is Dr. Migleemo, the ship’s counselor who’s never done this before. While Tendi, who has studied ALL THE SCIENCE, begs for a test to prove her knowledge, Migleemo instead tells her that her most important job is to “be the voice of science” and has her attend the meeting where Captain Freeman and the captain of the Carlsbad will formalize the peace agreement between the Federation scientists and the Scrubble (the indigenous rock creatures). 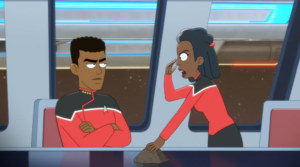 Freeman and the Carlsbad captain, Captain Maier, who is significantly younger, immediately start politely butting heads with passive-aggressive jabs at each others’ ages. Then the Scrubble representative presents a gift, a sacred rock, and the two captains start arguing over who should have it, with each trying to out-polite each other by saying the other should have it. As far as polite fights go, this one is pretty dramatic. Tendi tries to tell the captains about some odd readings from the rock but no one listens, so she timidly sneaks out.

On the planet, the Cerritos and Carlsbad lower deckers have escaped into a cave, which, naturally, blocks all signals. Outside, the nightmares rage on. While holed up, the Carlsbad crew confesses that they were only acting tough because the Cerritos crew are considered so cool—they were the ones who were intimidated. It’s been said before that while Lower Decks is ostensibly about unimportant Starfleet crew, our characters actually wind up in a lot of consequential adventures. The show leans into its own reputation with this scene, as apparently, the Cerritos has become famous among the lower-ranking crew of support ships. The moment is a bit Disney Channel in its quick and friendly resolution of a rivalry, but that’s pretty in keeping with the tone of the show.

Now that they’re all friends and ready to sing kumbaya, they just have to find a way to escape. They soon notice that the visions show not only nightmares, but random thoughts as well. After detecting a signal, they follow it to the back of the cave, where they discover a secret lair full of fantasy rocks… and also Federation science equipment. And this lair has been recording all of their thoughts, including private knowledge and classified Starfleet information…

Back on the Cerritos, after seeking advice from her old boss Dr. T’Ana, Tendi returns to the meeting room, where the two captains are still arguing over who should get the sacred rock. Fed up, she grabs and smashes the thing open, revealing a recording device. Turned out, the scientists and the Scrubble were in cahoots, staging the conflict to get Starfleet out there with a plan to plant a recording device in a captain’s office, gain classified information, and sell it on the black market. Boimler and Mariner show up to report what they found on the planet.

The representatives are both arrested to face a Federation tribunal, and everything’s wrapped up with a tidy bow as our crew, including the mysteriously-recovered Stevens, hangs out in the bar (the lack of explanation for Stevens’ recovery seems like a poke at Star Trek episodes where crew members are always transforming into stuff, then miraculously transforming back after some basic technobabble).

All in all, “Mining the Mind’s Mines” was another fun romp with the Cerritos crew, with a few more twists than usual and some tongue-in-cheek acknowledgments of the show’s own reputation, as well as the expected loving parodies of Treks past.

Previous article
She-Hulk Episode 4 Review: Is This Not Real Magic?
Next article
D23 Will Have A Special Comic Exclusive Variant Featuring Mickey Mouse, Spider-man, and More