A comic series filled with grit and humor, we take a look at Darick Robertson, Eric Peterson, and Joe Aubrey’s ‘Space Bastards’ Volume 2.

The first thing you’ll notice about Space Bastards, after reading it for the first time, is its unrelenting parodical grit. An entertainingly violent and funny take on corporate greed, much in thematic tones of The Boys, the galaxy of Space Bastards is what happens when you take humanity’s unrelenting desire for space travel and left it up to the whims of unfettered corporate billionaires (much like in real life) causing space expansion to become excessive, highly profitable, and incredibly exploitable. Due to pirates, the transportation of prized parcels between planets is now a lucrative yet dangerous business venture, leaving only the cunningly desperate, toughest-of-the-tough, and overall: stupidest bastards in space left to deliver.

Originally a successful Kickstarter, Space Bastards features the work of artists Simon Bisley, Clint Langley, and Dan Panosian. The series is also co-created by the classy Darick Robertson. The highly talented artist who has worked for almost all the major publishers and is renowned for co-creating Transmetropolitan, Happy! and The Boys. When asked about the series, Robertson had this to say to The Workprint:

For now, my work here is done, but I’d love to see a world where the Bastards come back and my pals Joe, Eric and I can do some origin stories with this insane cast of characters.

The comic series has easily been one of the most excessive things I’ve ever read. Entertaining, guttural, and in-your-face: filled with action, grit, and over-the-top shit. In a world driven by greed where profits dominate and quality of life declines. Action, explosions, machine guns, and betrayal? Par to the course. All beautifully colored and designed to draw the reader’s eyes to both its paneling and coloring. This comic is nothing shy of superb in its action sequences.

I guess the best way to sell Space Bastards is this: what if every Bounty Hunting trope you’ve seen in science fiction was suddenly replaced by violent package delivery services? Space Bastards is the violently silly answer to that question. Necessary? No. Entertaining? Absolutely.

Because the demands for deliveries are so high in the Space Bastards universe, every time a parcel exchanges hands, the payout increases… in what’s essentially the most action-packed science fiction game of hot potato ever created in the comics medium. Suffice to say, the series feels like a video game. Where anyone you meet in just about anywhere you see the characters go, always leads to the chance for action. As such, the comic is always in a state of momentum in every scene. This synchronizes with the artwork rather well in that it’s very action-driven with over-the-limit violence and obscenities.

Space Bastards Volume 1 follows the story of David S. Proton, a disheveled accountant turned postal worker who, like most of the ensemble of the main series, got screwed by corporate society. He, along with the epitome of badassery: the ex-convict Manny Corns, have a bit of a violent back-and-forth throughout volume one. As mentors and mentees become betrayers and cut-throat entities, audiences get to understand the origins of this new mail delivery system-driven reality led by a con man and postmaster general, Roy Sharpton.

Roy Sharpton is a charlatan. A man who appropriates everything in the most distasteful ways imaginable, failing his way upwards on the corporate ladder, all by mooching off the laurels of those who’d come before him. A man who turned the failing mail system into the most violent parcel delivery service on the planet, Roy frequently butts heads with the wealthy Wayne Powers, who more-or-less, is what you’d get if Jeff Bezos inhabited the body of Bruce Wayne and decided: Space. Let’s do it. Fuck the consequences.

In volume 2, we see the series pivot its focus. As we go back into the origins of the deuteragonist, Resurrection Mary. All while Manny, the psychotic Manicorn, takes a holiday and is not doing so well. Whereas volume one was pretty much non-stop intensity, issues 7-9 involve a lot more exploration of the world and its universe. A place where people can be considered as cargo and buddings of space violence has only just begun.

The most noticeable thing about these issues is the pivot in terms of the art style, as Colin MacNeil has a distinct stylistic approach that fans of his will recognize regarding his standalone with Mary. Likewise, Clint Langley’s take on some of the backstory of the series, adds for a visual appeal that will have fans nostalgic over 2000 AD.

I think what’s the greatest part though about these volumes is just how much resolution each delivers by its end. As a lot of arcs come full-circle in ways I think fans will be genuinely surprised about. People become different types of people, friends become enemies, would-be-lovers become beloved, and I’m actually lying about half of these descriptions though you’ll have to trust me: that there are some serious changes made in volume 2’s dynamic by its end. I genuinely think it opens the door for more Space Bastards, though it also, provides a bit of a… happy ending? Which I think will surprise a lot of fans.

Still, this is by no means the end. It’s pretty evident that Space Bastards becomes stronger as an ensemble in the styles of Pulp Fiction or Sin City by the ending issues of Volume 2. Here’s to hoping for even more! 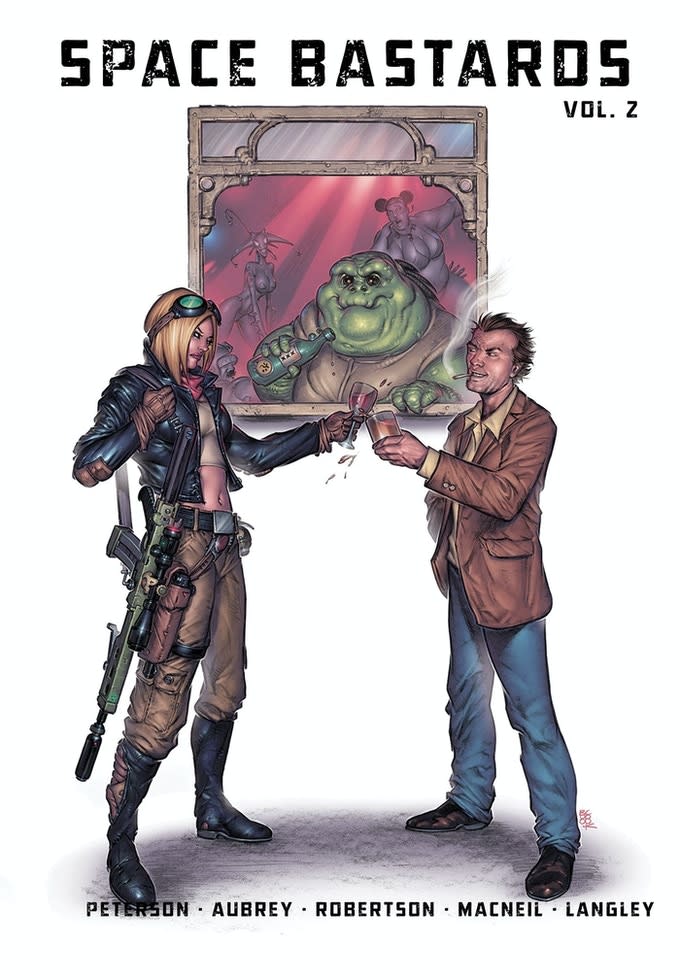 You can support your fellow Space Bastards by purchasing goods and comics over at SpaceBastards.com