Know your worth. If you’re a hit that’s gonna make people a ton of money your life isn’t made – not yet anyway. After their stellar TechCrunch debut, Pied Piper is beset with a slew of new problems. Specifically, who’s money to take. Similar to it’s opening in the first season where Kid Rock performed at a modest get together, season two’s debut starts at AT&T Park where a smattering of people mingle on the diamond. There, Richard endures perhaps his two biggest fears; athletics and attention. His friend Javeed, the former renter of that mansion Mr. Rock sang at in the pilot, is also there. He’s considerably worse for wear, as his company was taken from him due to a down quarter which got his investors spooked; leaving him broke and alone. Javeed embodies the pitfalls that could happen to Richard if he’s not smart.

Unfortunately, reality dictated Peter Gregory’s death while on safari in the Serengeti. At the end of 2013, Christopher Evan Welch passed away from lung cancer leaving a noticeable absence in the second half of last season. His performance as a socially inept genius was original and hilarious. Peter Gregory’s successor, Laurie, continues this character trend as her staccato sentences and darting eye movements play up her character’s lack of charisma. Given recent events in San Francisco with the Ellen Pao case highlighting the gender gap in Venture Capital, it’s nice to see Silicon Valley casting a woman as Gregory’s successor. Not only is it a topical issue, but it helps to balance out a cast that last season only had Amanda Crew’s Monica as a main female character. 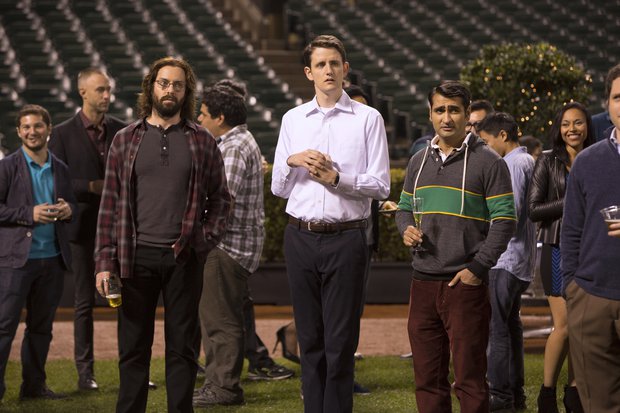 Speaking of Monica, she finds out from Laurie that her position as Associate Partner is in jeopardy if Pied Piper doesn’t sign with them. Uneasy with the possible shifting personnel at Raviga, Richard and Erlich meet with the various firms that have courted them only to find tepid responses. Realizing this to be a negotiation tactic, Erlich describes as “negging” – a manipulative sex strategy used by lonely chauvinists, he unleashes his brash demeanor to counteract the firms’ lowball strategy. It surprisingly works, as higher and higher offers roll in. It’s an example of how despite not being able to code he brings value to the Pied Piper team. To ensure that they stay with Raviga, Laurie gives them an offer well above all the other firms. Though this seems like the answer to their problems, Monica points out that it’s an overvaluation, suggesting he take the lowest offer. It was important to show Monica’s future at the company was at risk so that when she tells Richard to take a lower deal we know that she has the best intentions in mind, even if he doesn’t realize it. After running the hypothetical scenario of possibly taking less money past Javeed, and subsequently destroying his fragile psyche, Richard follows her advice and takes half of the proposal. Having quelled one problem they’re hit with another that will possibly run the length of this season; Hooli is suing them.

Silicon Valley’s strength comes in its ability to highlight the absurdity of start-up tech culture by adding slight embellishments. Peter Gregory’s funeral is an event in and of itself; blending eulogies with the tone of a Ted Talk. Attendees dressed in hoodies, is an examples of how Mike Judge exaggerates the world but only slightly keeping the tone believable. Silicon Valley continues to improve. While it’s always been funny, the characters and their relationships with one another are settling into a groove as Pied Piper continues to develop. While TJ Miller continues to channel his inner Michael Scott as the oblivious egomaniac Erlich, I find myself loving the growing adversarial relationship between Gilfoil and Dinesh. It’s also nice seeing Richard stand up for himself as he did in their first meeting, it makes him a more engaging protagonist.

I’m excited to see how this season unfolds. Its serial, as opposed to episodic, nature is something not normally seen in half hour comedies and, aside from the jokes, the company’s development creates weekly anticipation.