On Shadowhunters this week, the squad is split into two groups as Jace, Clary, and Simon head to the Seelie court to meet with their queen, while Alec and Izzy stay behind to host the Downworlders for a meeting.

The Seelie Queen has informed the Clave that she will only speak with Valentine’s children regarding Kaelie’s crimes and two the two former siblings are forced to go to her realm. Naturally, Simon decides to come as well because where Clary goes he goes too. The entrance into the fairy lands is through a brook inside Central Park. So the three take turns jumping off a bridge and to themselves inside a beautiful but deadly forest. One thing to know about the land under the hill is that time moves differently, sometimes faster, other times slower. Since the fey are creatures with both angel and demon blood, they have the beauty of heavenly creatures yet are vicious due to their demonic heritage. While Seelies cannot lie, they are expert manipulators of the truth and are known to be cunning and cruel.

Simon sees a bleeding tree and he touches one of its branches to come away with blood and dead flies (that he crushed). Jace pulls him back, explaining that this is a kill tree and that if he got any closer, its vines would wrap itself around his body then tear him apart. He gives the lovebirds some advice, don’t touch, smell, or taste anything in here because everything is dangerous.

When they finally get to the court, the queen looks to be a child in her preteens instead of an ancient creature. Jace tells Clary that she’s using magic to appear this way. With the recent announcement that Modern Family’s Sarah Hyland is guesting on the show this season, the Internet was abuzz that she could be playing the beautiful one, but alas, not in this episode at least. The three New Yorkers are received though the Queen (played by Lola Flannery) appears surprised that Simon is there because she hadn’t invited him. Jace however tells her majesty that the vampire has been a valued ally to them. He is allowed to stay and they have a meal together. The Seelie Queen proceeds to  asks about what Valentine’s children could do and Clary informs her that she’s an only child. Jace confirms this and the faerie then requests for them to demonstrate their abilities, to which they hedge that they are still learning their capabilities. The ancient creature switches tactics and says that she wants to speak to Simon privately instead.

Understandably Simon is hesitant but goes as to not be rude. Once they are alone, the Queen tells the daylighter that she wants an alliance with him because Shadowhunters will always chose their kind over Downworlders. Simon declines though because he believes that Clary would never do that to him. In a brilliant ploy, she then uses vines to squeeze Simon and Jace to death, telling Clary that she must get the kiss of her deepest desires. When she kisses the vampire nothing happens and she is forced to confront her the truth that she still has feelings for Jace. So she then has to kiss him, but says that this doesn’t mean anything. The vines soon release the two men but the damage has been done. The Queen has accomplished her own mission it seems. Simon leaves the court without his other two companions. 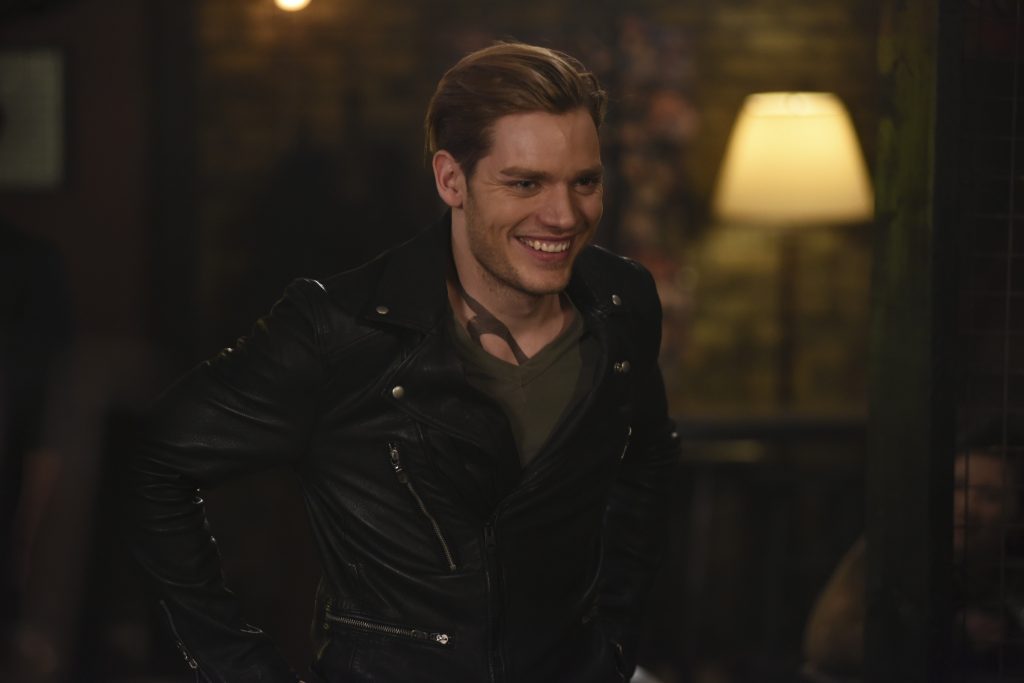 Back in New York, Clary tries to apologize to Simon but he refuses to see her. He drowns his sorrows in music instead. When she returns to the Institute, Jace tries to talk to her in turn about what happened but she just can’t handle it herself right now. Earlier in the episode, Sebastian finds Jace playing the piano and the two have a little chat where Mr. Verlac tells Mr. Herondale that he thought he was interested in Ms. Fairchild. Finally after that kiss it appears that Jace has finally admitted to himself that he does still have feelings for her, even though it was obvious to everyone else.

Speaking of Sebastian, he was shut down by Clary last week and one might wonder if he is showing interest in Isabelle instead. He is a part of the security team at the Institute while Alec holds his cabinet meeting and meets Meliorn and Raphael, who have attended as representatives. Alec had called for this gathering as a means to show more transparency and improve relations between Shadowhunters and Downworlders, at least in New York. Izzy is also on deck as part of the welcoming committee and is caught in a testosterone tangle of competing egos.

First Meliorn and Raphael have their own little thing going on since the Seelie was a former lover of Izzy’s and the vampire had gotten close with her during her addiction to Yin Fen. Sebastian of course helped her to overcome her withdrawal of the drug, having experienced it himself (or so he says). Rapahel confronts the Shadowhunter and asks what his intentions are with Isabelle, to which Sebastian responds that he just wants to be her friend. But he then tells the older creature that he is the one who should stay away from her because he is a constant reminder of a very dark time in her life and will always be a negative temptation. 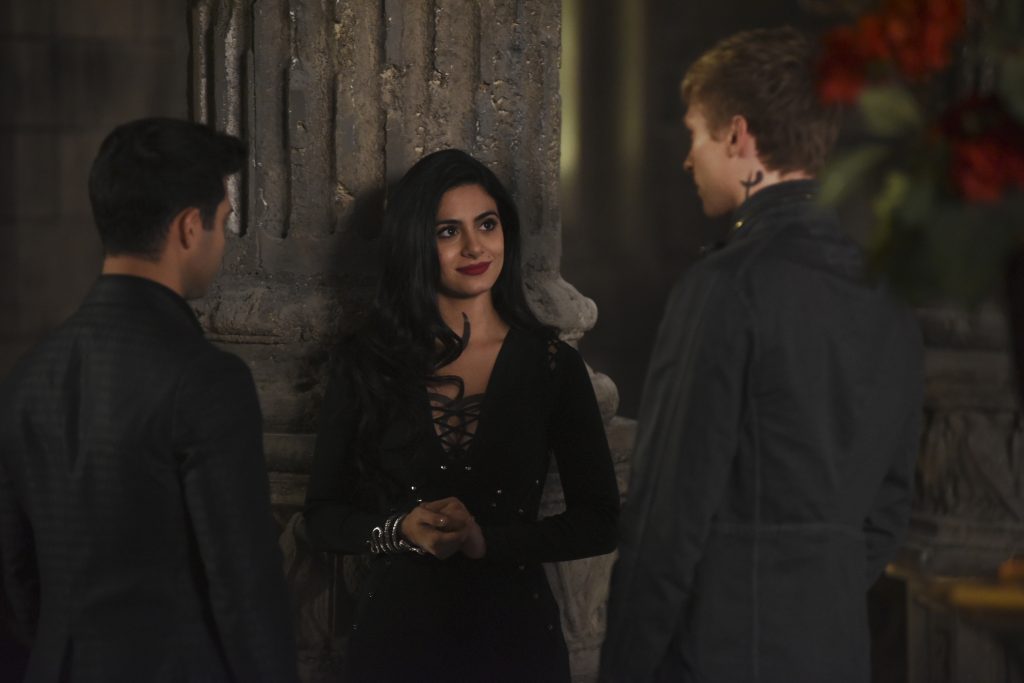 Sebastian’s words rattle Raphael into rejecting Izzy after she confesses her feelings. She tells him that she wants to see where their relationship could go because of their strong connection. The vampire uses the other Shadowhunter’s words and says that he isn’t good for her and that spending more time together could lead to a slip up. One mistake and they would be back to him biting her and she addicted to his blood. Drama! Raphael obviously cares about her, which is why Sebastian had such an effect on him.

Poor Izzy though because things are finally looking up after admitting that she has a Yin Fen problem, getting help, and even opening up to her mother about it. Maryse returned to New York from Idris to support Alec as the new head of the Institute and was convinced by her son to tell Isabelle about Robert’s cheating. When she does reveal it to her daughter, turns out Izzy already knew after overhearing her father on the phone some time ago. The younger Shadowhunter then admits her own issue of becoming addicted to Yin Fen, but that she was better now and in recovery. The two women share a tender moment as Maryse breaks down in tears for not being there and they make up. Mother tells her child that she should continue fighting for love despite this because she deserves to be happy. Unfortunately, she is then rejected by the object of her affection because he is dealing with his own problems.

Meanwhile, Alec and Magnus seem to be hanging in there in tonight’s episode. The warlock of course is invited to the cabinet meeting as a representative, though they both are to keep it strictly professional so that it doesn’t seem like Alec is playing favorites just because they are dating. Magnus is being overly courteous and it’s adorable because obviously both Raphael and Meliorn know that the two are dating. Things get a little crazy though when Luke accepts help from a mysterious individual who wants to aid him in eliminating Valentine. 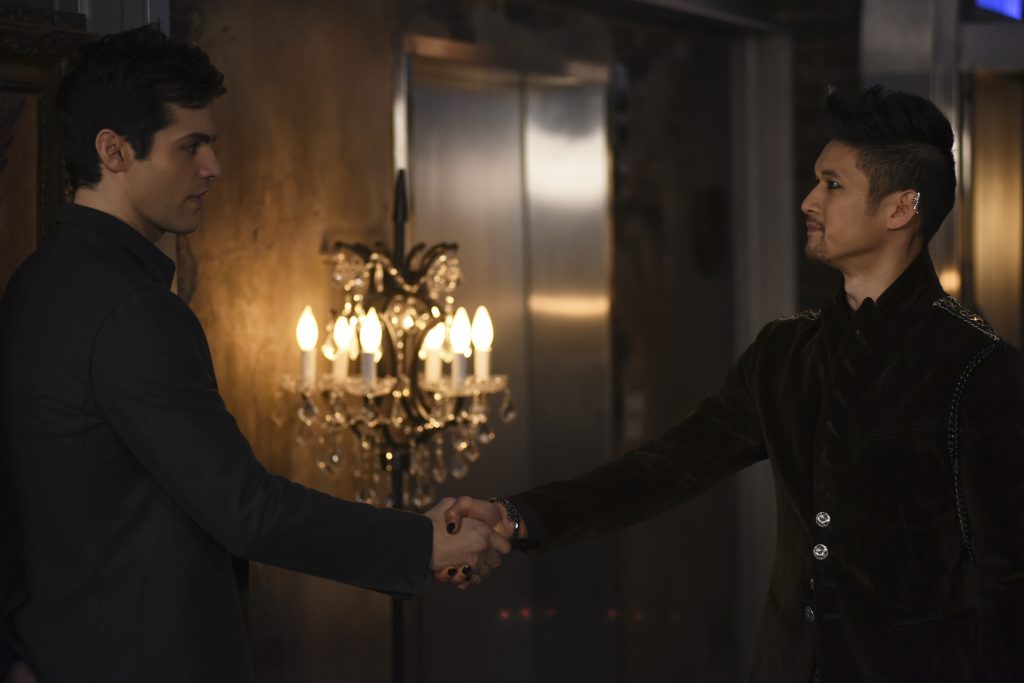 Luke had been asking for the Soul Sword to get destroyed, but of course there’s no way that the Clave would get rid of a Mortal Instrument. So instead Downworld demands for Valentine’s death, yet since the Mortal Cup is still missing, the Shadowhunters aren’t quite ready to kill him yet. Alec tells Luke that he’s going to campaign hard for the Circle leader’s execution to go through as quickly as possible, but the werewolf loses patience. As a former Shadowhunter himself he knows that the Clave is full of empty promises and Downworld needs real change. On the night of the meeting, someone leaves a cell phone for Luke to find outside the Jade Wolf. Once he picks up the call, a distorted voice tells him that he can arrange for him to be inside Val’s cell. At first Luke passes, but as he gets increasingly frustrated inside the Institute, he has a change of heart and agrees to work with the mysterious voice over the phone. The security cameras are temporarily disabled, allowing him five minutes to get down to the detention center and kill his former parabatai.

However, Luke was unsuccessful as Sebastian informs Alec that the security cameras were being looped and the two Shadowhunters are able to stop blood from being shed. Alec asks the New York pack leader what he was thinking and the other man admits that he did it because he didn’t want the Circle leader escaping again. He also adds that someone was helping him. They figure it had to be someone from the inside. Luke ends up getting a pass despite the attempted murder because Alec wants to show that he isn’t here to persecute Downworld. 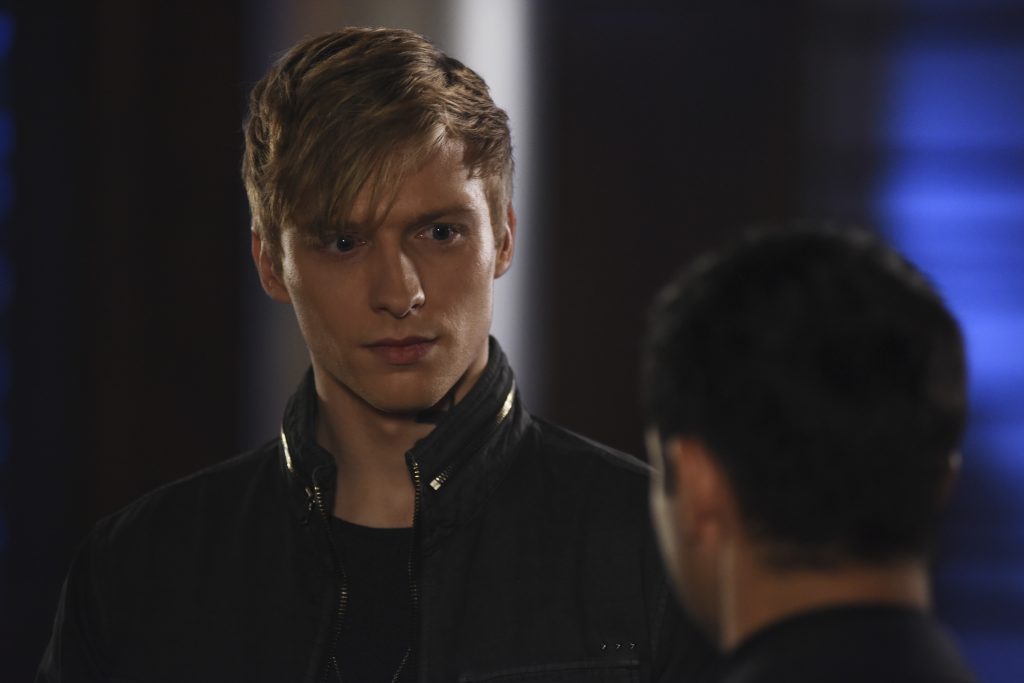 While earlier in the episode there were other Shadowhunters who were unhappy with Mr. Lightwood taking leadership, I suspect that the mysterious caller is likely Sebastian since he was managing security at the meeting and would be in a prime place to access the cameras. We also see a shot of a burner phone inside his apartment. He also could have done this to earn Alec’s trust by reporting in Luke. When Seb meets Valentine in the flesh, the older man asks if they know each other. The London Institute transfer venomously hisses that he doesn’t get to die yet.

After the meeting, Sebastian is back at his place playing the same song on the piano that Jace playing was in the morning. We’ve already gotten clues that not all is as it seems with Mr. Verlac (with the hand above the open flame) and now we’re shown that he has a man trapped in his closet. Now who could that be?

This week’s episode was full of drama as our heroes struggled with their love lives but also face an ever-increasingly angry Downworld. The Seelie Queen herself said that she allies herself with the winning side and it is theirs. Will Simon be able to get over the Clace kiss? Will Izzy move one from Raphael? I sure hope these two crazy kids find solace in each other because I needs me some Sizzy!