‘Shadowhunters’ Review: Jace is a Herondale at Last

In this week’s episode of Shadowhunters, Jace finally finds out that he is a part of the Herondale family.

The Inquisitor, Imogen Herondale (Mimi Kuzyk), is at wits end with Valentine (Alan Van Sprang) refusing to reveal the location of the Mortal Cup, except of course he is really Magnus (Harry Shum Jr.). Meanwhile the real Valentine is in the warlock’s body. Azazel goes to Val and says that he will only reverse the spell once he gets the cup, although he didn’t even intend to put the Nephilim back in his original body. Alec (Matthew Daddario) comes over to the loft after calling Magnus, who was super dodgy and refused to help him track the greater demon down. Once he gets there Azazel himself attacks him, pissed at Valentine that he didn’t get rid of Alec. The young Shadowhunter though manages to vanquish the creature with his bow, to the shock of Val who is still stuck in a Downworlder’s body.

Frustrated, he calls Dot to teach him basic casting since he “forgot” how to do stuff after his encounter with the demon. He then puts his plan into action by luring Jace (Dominic Sherwood) to the loft and putting him in shackles. Back at the Institute, Imogen is about to kill Magnus with Alec’s help when the Valentine appears with Jace in chains. He then confirms him identity to the Inquisitor and reveals that if she wants to save her grandson then she needs to release Magnus so that they can switch bodies. He explains how Jace is the son of Stephen Herondale and his wife Celine, who supposedly died by being mauled by werewolves while pregnant. Except that Val took the baby because the Clave had taken so much from him. Imogen now is faced with a choice to either believe the man or not. As proof he shows her the Herondale ring that he took from Celine. 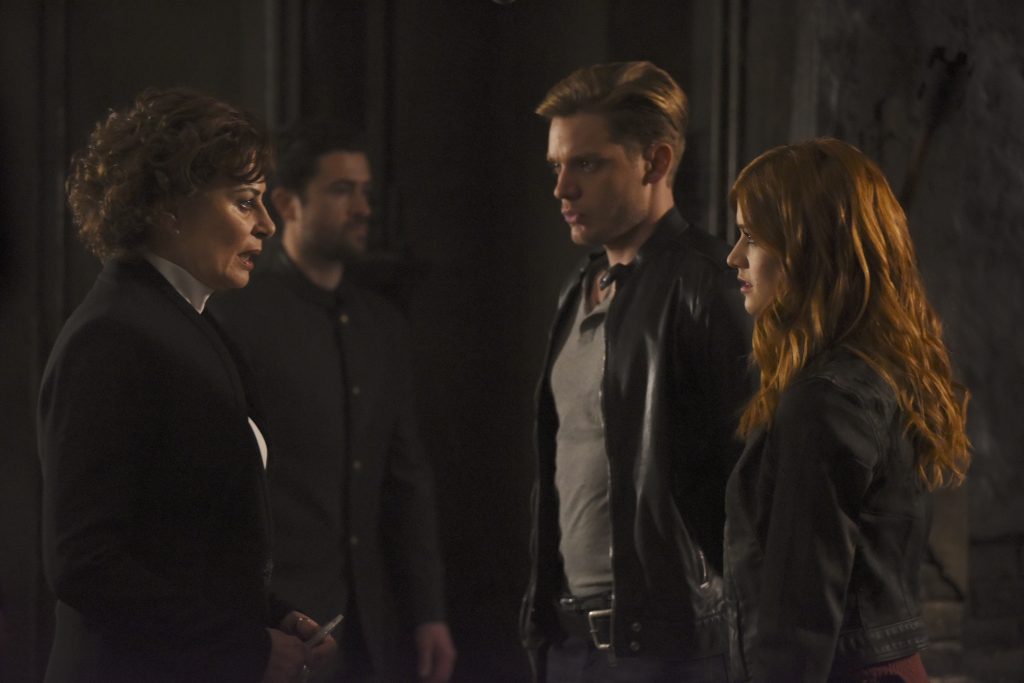 She releases Magnus with Alec, Clary (Katherine McNamara), and Sebastian (Will Tudor) as backup. Valentine puts up a ward and then creates a portal before the body switch. Clary in the meantime is still having a hard time creating new runes after her encounter with Azazel last episode. Sebastian then gets her to feel all the repressed emotions she’s been having and she’s finally able to create a rune that destroys the ward. They burst inside just as Magnus and Valentine return to their original forms and she tackles her father into the portal and back into his cell at the Institute.

Meanwhile, Imogen comes to meet Jace and gives him the Herondale ring. She tells him that he comes from a long line of powerful Shadowhunters and I nod vigorously. In The Mortal Instrument series, Jace doesn’t find out about his true parentage until City of Glass, but it’s exciting for him to find out at this time on the show because it opens a new chapter for the character. Up to this point, Imogen had treated Jace with disdain, believing him to be Valentine’s son. Now though, grandmother and grandson have a chance to connect. In their final scene together this episode, the Inquisitor says that Jace’s defiant streak is just like his father’s and that now he’s going to find out what it means to be a Herondale.

Jace is a descendant of Will Herondale and Tessa Gray (daughter of Elizabeth Grey, born Adele Starkweather), who had been half-Shadowhunter/half-Eidolon demon and a warlock. Will and Tessa were main characters in The Infernal Devices series along with Jem Carstairs (Will’s parabatai). While there have been some discussion online about Jace’s heritage coming to light too soon, I think it could be a good thing because we’ll see his character experience new and different things. It’s almost like an alternative timeline that opens up all sorts of possibilities.

Simon (Alberto Rosende) also finds out in this episode that Jace isn’t Clary’s brother and eventually confronts his ladylove about it. Clary though tells him that she didn’t tell him because she didn’t want to worry him but instead achieved just that. But they kiss and make up and all seems well. The daylighter also had some touching scenes with Isabelle (Emeraude Toubia) and yes he is a catch! 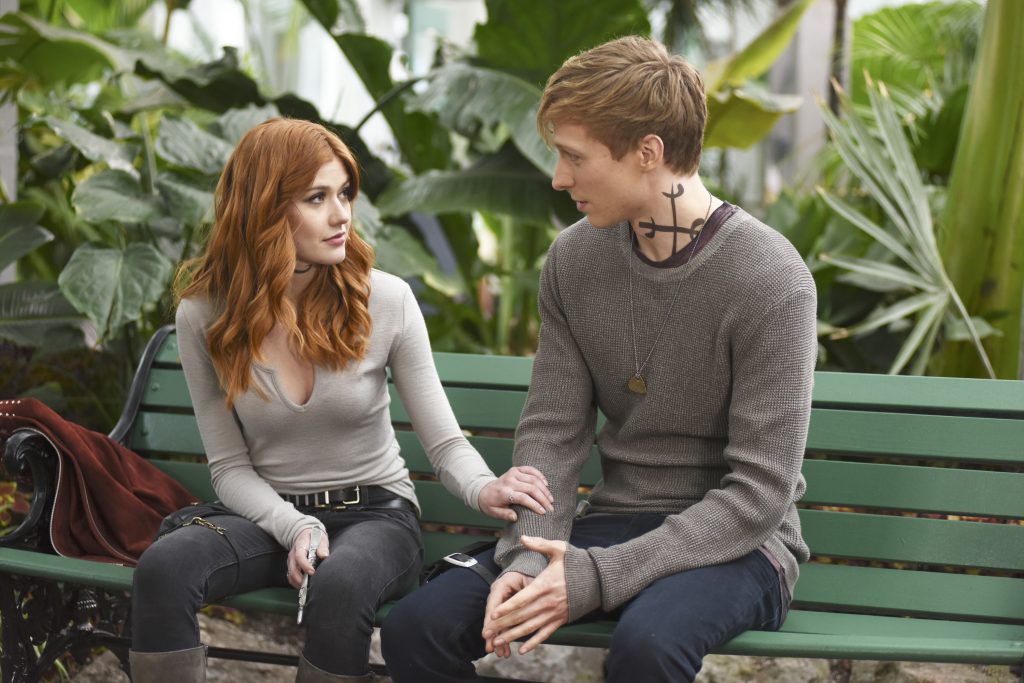 However, there is still very much a spark between Clace that was evident during their fighting session under the watchful eye of the Inquisitor. But there was also something there between Clary and Sebastian too. While book readers know who Sebastian really is, Will Tudor is doing such an amazing job that I’m finding myself rooting for him to have a different path from his book character. Undeniably there is chemistry between the two actors, especially in that intense scene where Sebastian was telling Clary to really feel all her emotions between her mom dying, not having a father who would ever love her, losing the person who she thought was her brother and feeling utterly alone. Obviously he was putting in some of his own feelings in there and it was awesome to watch.

So Clary now has three guys who are interested in her and boy oh boy I can’t wait to see how this all plays out (yes, I’m now slightly in denial about certain familial relationships that will come to light sooner or later).

The most heart wrenching scenes in this episode though were between Malec. Alan Van Sprang did a fantastic job playing Magnus trapped in Valentine’s body as well as Harry Shum Jr. channeling his inner Val. The final moment between Alec and the warlock after being tortured at the hands of the Inquisitor was so heart wrenching. I only wish those two got more screen time because they really needed to have a long discussion about what happened. Things are not looking for good for their relationship at the moment. Magnus must be remembering how brutal the Clave can be to Downworlders because the Nephilim aren’t all goodness and light. They can be prejudiced and cruel.

And if the promo to episode 13 is any indication, more trouble is brewing in the shadow world.

@theworkprint
Follow
Previous article‘Dark Matter’ Returns And Five Gets To Use The Big Gun
Next articleE3 2017: Sony is Remastering ‘Shadow of the Colossus’